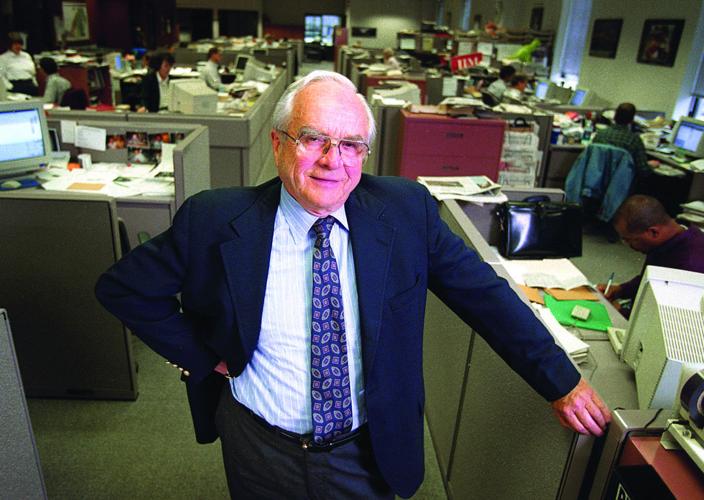 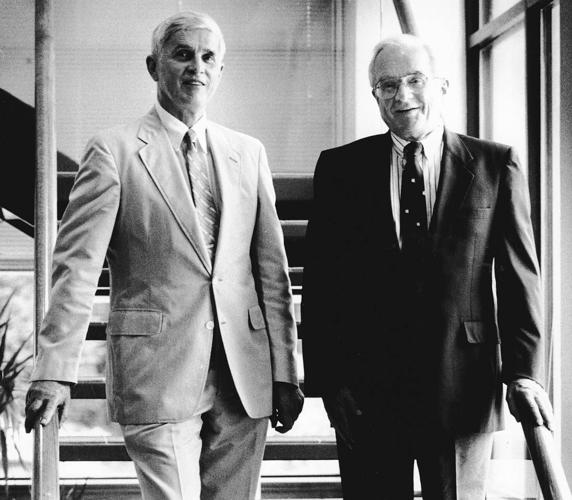 Josiah Rowe III (left) and Charles Rowe took over The Free Lance–Star in 1949.

Charles S. Rowe was 24 years old and about to begin his final year of law school when his father had a heart attack and died.

Rowe didn’t hesitate to set aside his plans and head home to Fredericksburg to help his younger brother run the family business.

That’s how Rowe, a Washington and Lee University honor graduate who had planned to study journalism but earned a degree in economics instead, ended up as editor and co-publisher of The Free Lance–Star.

Rowe died Friday morning at a Florida hospital. He was 89. In recent years, he had divided his time between Fredericksburg and Vero Beach, Fla.

After his father’s death, Charles and his brother, Josiah P. Rowe III, embraced the challenge of running the newspaper.

“They both had a very high sense of commitment, not only to the community, but to their family,” said Bill Poole, who was hired by the brothers in 1960 to launch WFLS. He worked for the Rowes for 40 years as general manager of their radio stations and said they became like brothers to him.

Charles Rowe, a Navy veteran who saw combat in the Pacific during World War II, immersed himself in his new mission. He led the news operation while his brother managed the advertising, business, circulation and production departments.

He joined state and national journalism organizations to learn more about his new vocation. He later held leadership positions in many of those groups and locally served on the library board and advocated for a regional library system.

Rowe served as a Pulitzer Prize juror in 1982, 1983, 1992 and 1993, was a member of the executive committee of the World Press Freedom Committee and campaigned for freedom of information. In 1972, he was part of the first group of U.S. newspaper editors to visit China after President Nixon reopened relations with the Asian nation.

“Charles Rowe was the most impressive newsman I’ve ever known,” said Ed Jones, who served as managing editor under Rowe and later became editor before retiring in 2013. “He had a fearless commitment to the highest ideals of journalism. Charles was utterly fair and unflinchingly courageous.”

Rowe’s example inspired Jones as a young intern to pursue journalism as a career.

“He also transformed our community,” Jones said. “The Free Lance–Star ‘brand’ became a symbol of hometown journalism at its finest, as so noted by Time magazine.”

In 1986, Time named the FLS one of the best newspapers of its size in America.

Columnist Rob Hedelt, a W&L alum hired by Rowe as an intern in 1977, echoed Jones.

“Whenever push came to shove, he was there backing us up on stories,” Hedelt said, even if an advertiser was threatening to pull an ad. “It was always about getting the story out to the community.”

“He was a consummate journalist,” retired managing editor Nancy Moore said. “He made the right decisions for the right reasons.”

Rowe also took on political conservatives throughout Virginia with editorials that demanded change.

“I remember when he OK’d the endorsement of Henry Howell for governor back in 1973, when many saw Howell as a ‘wild liberal,’” Jones said. “The pushback from the community on that was huge. But not only was Charles OK with that, he seemed to revel in it.

“He believed in freedom of speech and in the critical role of an editorial page in the community—even when that editorial point of view challenged the majority,” Jones said.

He read news stories closely, using his law school training to question premises and look for holes. When he found them, he’d send yellow notes with questions or critiques to staffers.

Those notes “could look pretty intimidating,” Jones said. “But he complemented that toughness with a wonderfully generous spirit. He believed in investing in his staff and in his community. And because he did, we’re all the better for it.”

Rowe’s son, Charlie, said it warms his heart when he runs into former newspaper employees who share fond memories of his father.

“He seemed to really make a lot of people happy,” Charlie Rowe said, even though he was in a business that could make people mad. And his father knew how to get the best out of people.

“He was very fortunate in hiring great people and then staying out of their way,” Charlie said, and as employees thrived, so did the business.

Rowe retired in 1997 after a 48-year career and sold his half of the business to his brother. The family continued to own the newspaper and radio stations until 2014.

Rowe read the paper daily, viewing it online when he was in Florida.

He lived with chronic obstructive pulmonary disease for the last decade or more, which required him to use an oxygen tank. But Poole said Rowe never complained about his illness.

“He was a remarkable guy,” he said. “All of his ailments never affected his intellect or his interest in things.”

One of those interests was cards. Rowe was an avid bridge and cribbage player.

“He always wanted to beat the hell out of me,” Poole joked.

CHARLES SPURGEON ROWE ceased being The Free Lance–Star’s editor and co-publisher (and co-owner) in Bill Clinton’s second term, but he left an …

The biggest star in our galaxy is about to die, here's what that means for Earth

Josiah Rowe III (left) and Charles Rowe took over The Free Lance–Star in 1949.