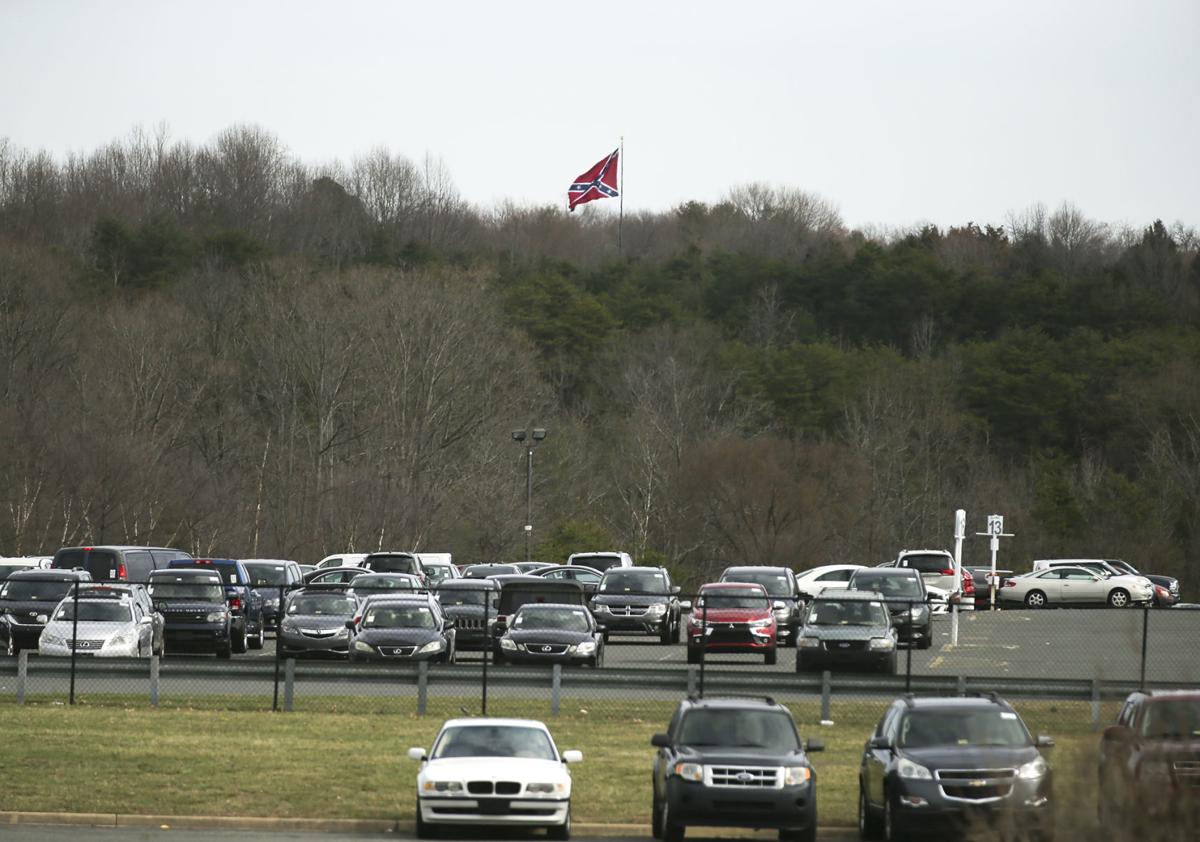 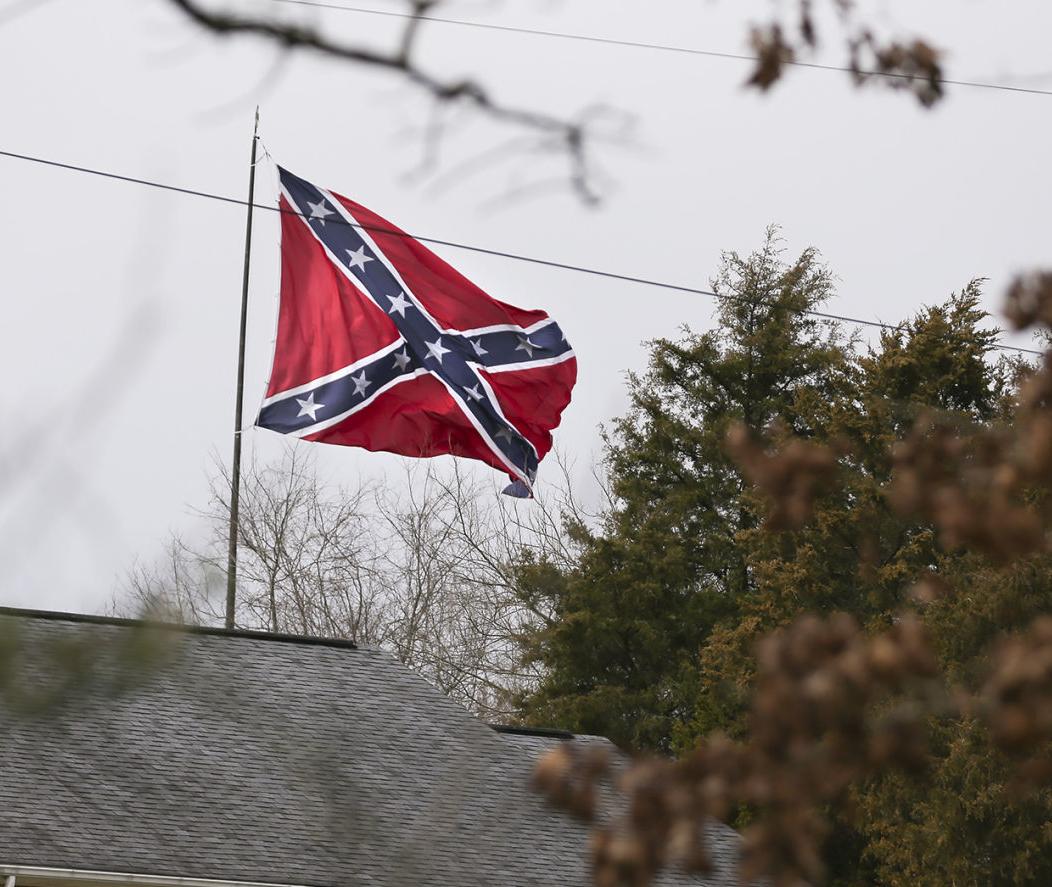 A Confederate flag in Stafford, seen from the street in front of a neighboring house on Beagle Road, remains controversial. 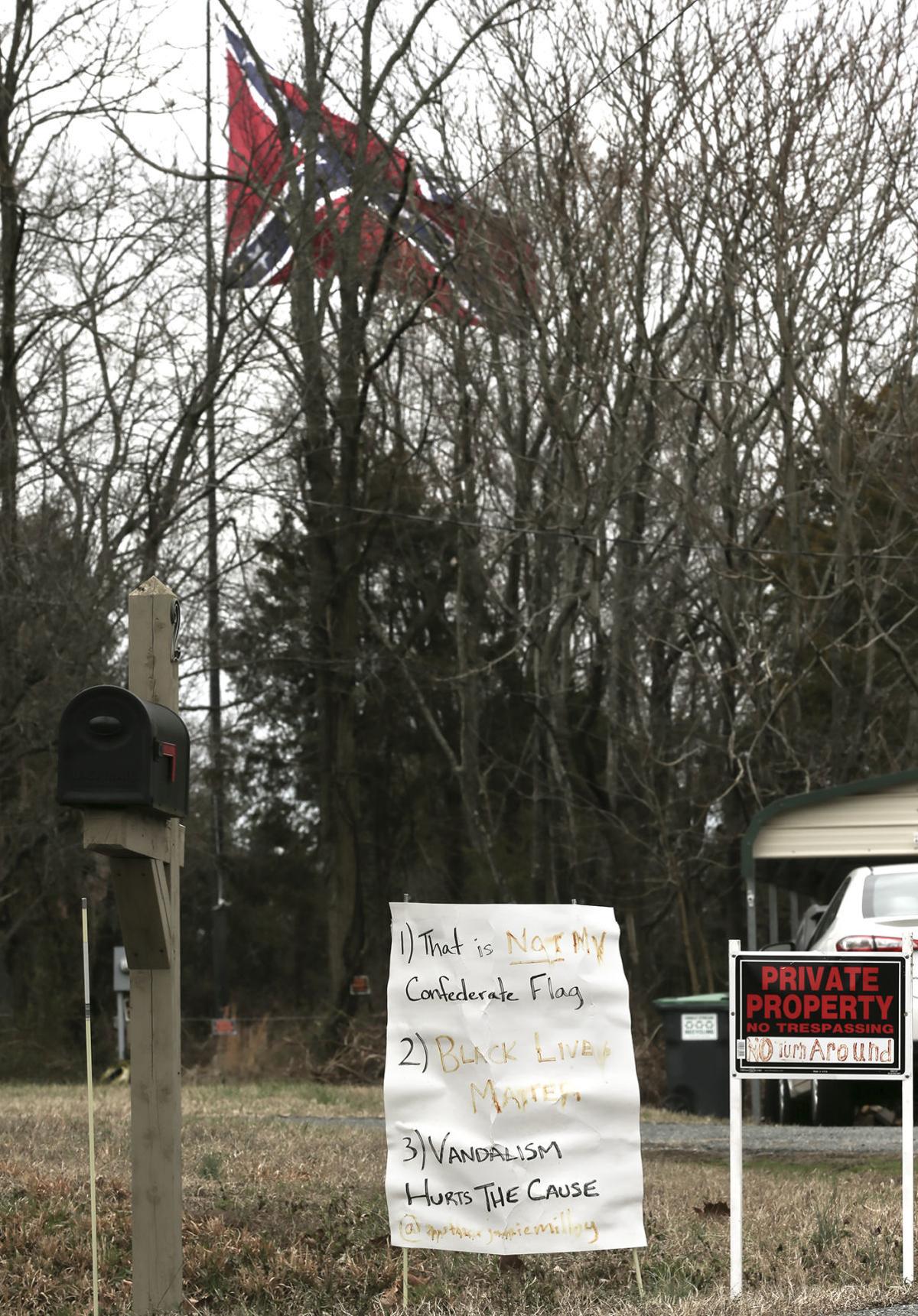 The Milloys, who live next door to the lot with the flag, have put up signs making it clear it’s not theirs. 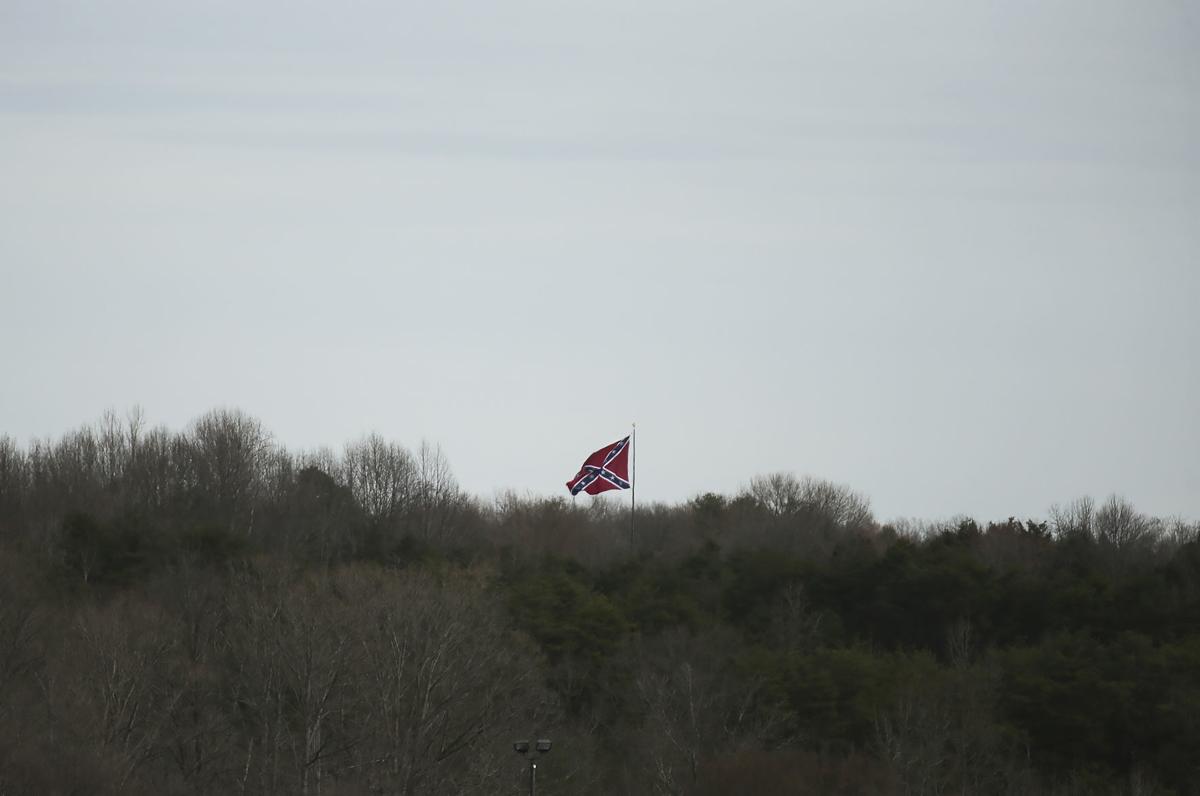 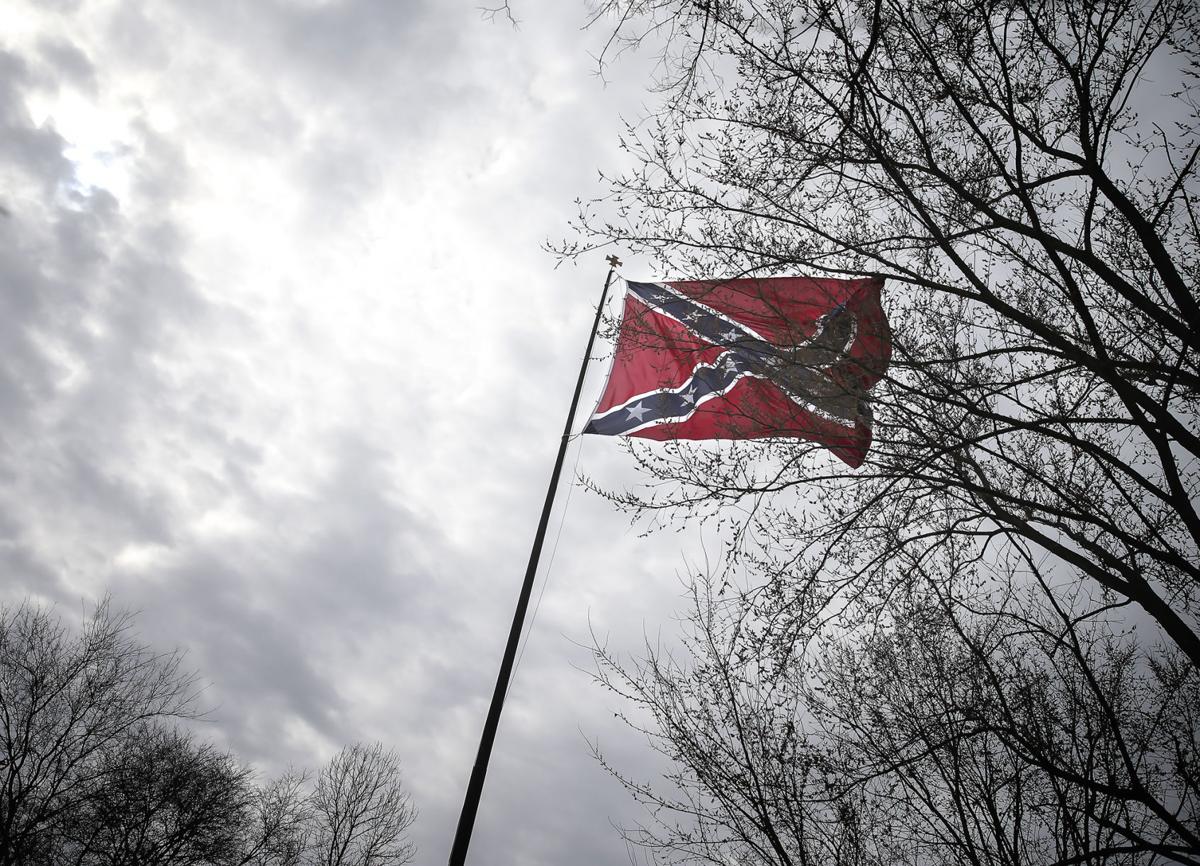 Jamie Milloy was reluctant to speak out against the massive Confederate battle flag that flies high over Interstate 95 in Stafford County.

The 80-foot flagpole stands on her only neighbor’s property, and she worried about the fallout if she complained.

Then, in October, someone vandalized her mailbox with the belief that she owned the flag. And just this month, Milloy said, she learned about racially charged remarks that have been attributed to the neighbor, whom she claims has also made “derogatory comments” to her about African–Americans and other minorities.

Her “live and let live” attitude toward the flag changed. In her view, it represents heritage and hate.

“This kind of puts a different light on it,” Milloy said in a phone interview Wednesday.

Her decision to speak out adds a new wrinkle to a yearslong controversy that continues to escalate.

During a contentious meeting Tuesday night, the Stafford Board of Zoning Appeals voted 6–1 to decline to consider an appeal disputing the flag’s legality, with Ernest Ackermann casting the dissenting vote. Members said the complainants, Thomas Jones and Patricia Joshi, lacked standing to submit the appeal under state law because they do not live near the flag, nor do they meet the legal definition of “aggrieved.”

Attorney Andrew McRoberts, who represented the BZA, said aggrieved means that any issue must have a “substantial impact” on a person that is greater than any impact to the general public.

But Milloy could have legal standing. She would first have to submit a complaint to the county, then appeal to the BZA if it is denied.

Milloy said she has been in touch with Stafford attorney Clark Leming, who filed the initial appeal on behalf of Jones and Joshi, but is unsure what she will do. She did not attend the BZA meeting because she had to work until 9:30 that night.

In a letter to the BZA dated Feb. 26, Milloy wrote that the flagpole was there when she visited her future home as a prospective buyer, but the flag was not flying. She probably would not have purchased the property had she known about it, she added.

“I can see it being difficult to sell my house now,” Milloy said in the interview, adding that the flag makes a lot of noise on windy nights. “I can see this affecting me in a lot of different ways.”

Leming said he may appeal the BZA’s decision to Stafford Circuit Court, which could order the quasi-judicial body to take up the case. Or he could find another complainant, possibly Milloy, with legal standing under the BZA’s interpretation.

Hubert Cash owns the 1.5-acre property on Beagle Road in Falmouth where the flagpole stands. He leased out the flag space to the Virginia Flaggers, which bills itself as a protest group against “those who would desecrate our Confederate monuments and memorials.”

The flag went up four years ago near the intersection of I–95 and U.S. 17, after Virginia Flaggers received a permit from the county. At night, a spotlight shines on the flag.

The unsuccessful appeal argued that, under Stafford’s own definition, the flag is actually a sign for the Virginia Flaggers. Signs in residential zoning districts can be no more than 6 feet in height.

Stafford’s ordinance states that signs exclude “flags of any nation, state, or other geopolitical entity not related to a commercial business, product, or service.” County officials determined that the battle flag represents a “geopolitical entity,” but Leming noted that it is not even the official flag of the Confederate States of America.

Nazi Germany and the Islamic State would also constitute geopolitical entities under the county’s reasoning, Leming said. “Where do you want to go with the definition?” he asked the BZA.

Those who attended the meeting, some holding printouts stating “HATE never made any nation great,” jeered the BZA’s decision to throw out the case. Some appeared frustrated that its members would not even offer their opinions of the flag, with Joshi saying they took the “cowardly way out.”

“Where there’s not civil rights, there is civil war!” one man shouted after the BZA’s vote.

“Shameful!” bellowed another spectator with a T–shirt picturing an American flag and the text: “If you want a rebel flag, nothing beats the original.”

“Why didn’t you let us speak?” a woman asked. “Enjoy that flag and when the neo-Nazis show up, enjoy what’s coming.”

More than a dozen people had signed up for a public hearing, but the BZA voted without letting them speak. Two deputies stood near the front of the meeting room and one was at the back because of the issue’s volatility.

Leming said he’s been to about 50 other BZA meetings over the years, all of which offered time for public comment.

Ackermann, the BZA member who voted against dismissing the case, said he thinks they should have made a decision on the actual appeal. “I really think it’s important for the county to directly address this issue, but I don’t know if it has,” he said.

Leming said that, while his clients do not live near the flag, they do have to drive by it several times a day during the course of their normal business. And he said they have unique circumstances setting them apart from the general public, noting that Joshi is in an interracial marriage.

The flag, he said, “is used to intimidate and the complainants are supersensitive to that intimidation.”

Still, BZA member Steve Apicella said that Jones and Joshi had not met the legal threshold to appeal, adding: “This does not mean I don’t agree with the concerns that they have.”

If the BZA ruled in favor of the appeal, he said he thinks the property owner would have “good cause” to overturn it in court.

“Well, let him do it,” a spectator shouted.

Recently retired County Attorney Charles Shumate said in September that the flag is protected by the First Amendment. And McRoberts, the BZA attorney, emphasized that those free-speech rights do not protect someone from being offended.

“The United States Supreme Court said very clearly that they were offended by the burning of the American flag, but they also upheld the right to do so under freedom of speech,” McRoberts said.

In her letter to the BZA, Milloy cited online comments attributed to her neighbor stating that “blacks are destroying my heritage” and that most should be “put down like the dogs they are.”

Cash, the neighbor, did not immediately reply to a Facebook request for a comment, and a telephone number listed for him had been disconnected.

A Fox 5 news report last year quoted Cash as saying he’s “deeply sorry” for his online comments and is not racist. “We’re just trying to preserve our history and honor our ancestors,” he told a Fox 5 reporter.

Milloy wrote that she thinks the county should treat the flag as a sign, writing that “there is no reason … it needs to be so big or so tall.”

After her mailbox was vandalized—someone spray-painted, “take down the flag, racist”—she and her husband put up a yard sign stating they do not own the flag and that “black lives matter.” “Vandalism hurts the cause,” the sign states.

She and her husband have considered putting up a Black Lives Matter flag near the battle flag, though theirs would not be visible from I–95.

“It’s our little way of protesting back,” she said.

WATCH NOW: City's curfew law ruled unconstitutional, but it's not the last word from the courts

A judge on Friday ruled that the curfew hastily enacted by Fredericksburg officials in early June was unconstitutional and that the city had no authority to make violating it a crime.

A Confederate flag in Stafford, seen from the street in front of a neighboring house on Beagle Road, remains controversial.

The Milloys, who live next door to the lot with the flag, have put up signs making it clear it’s not theirs.