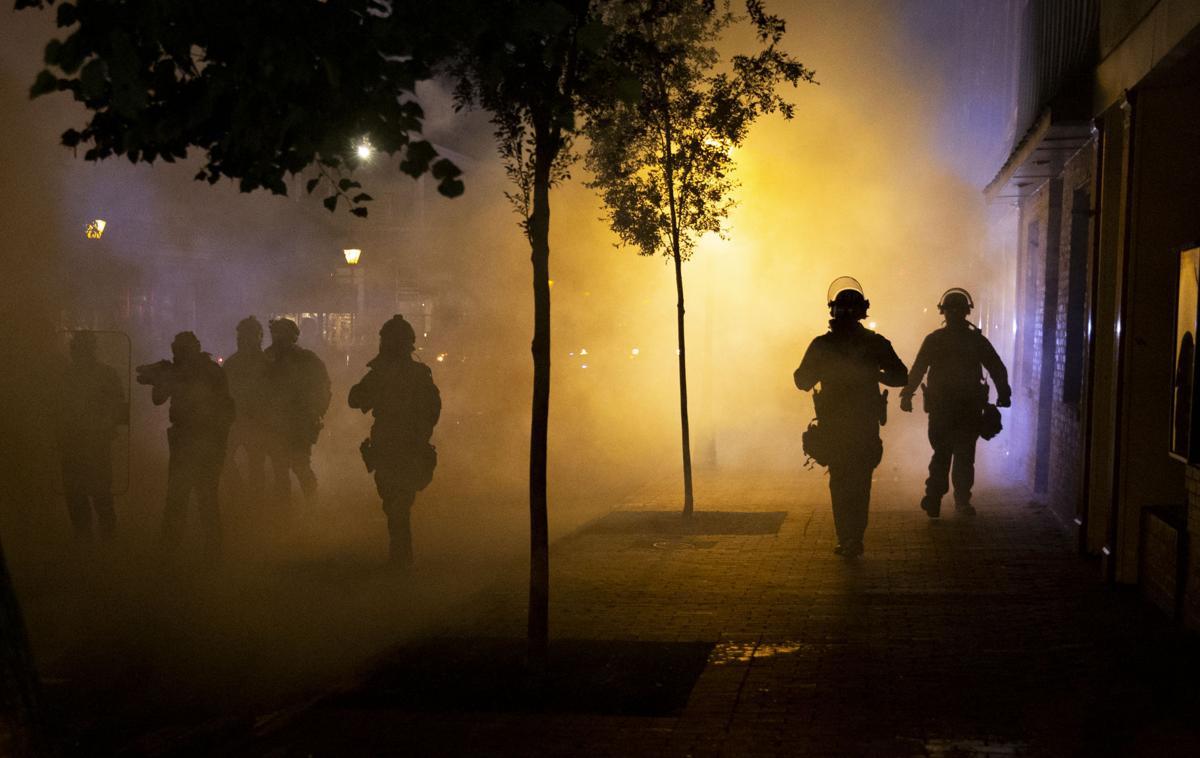 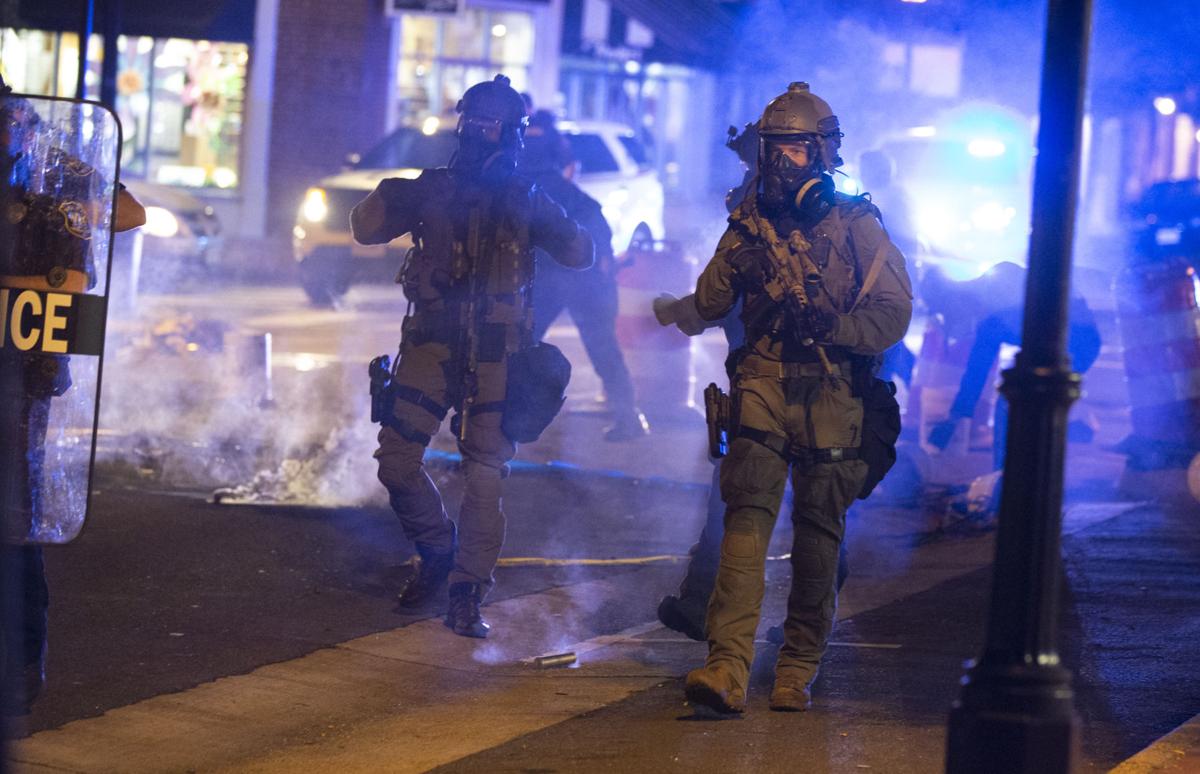 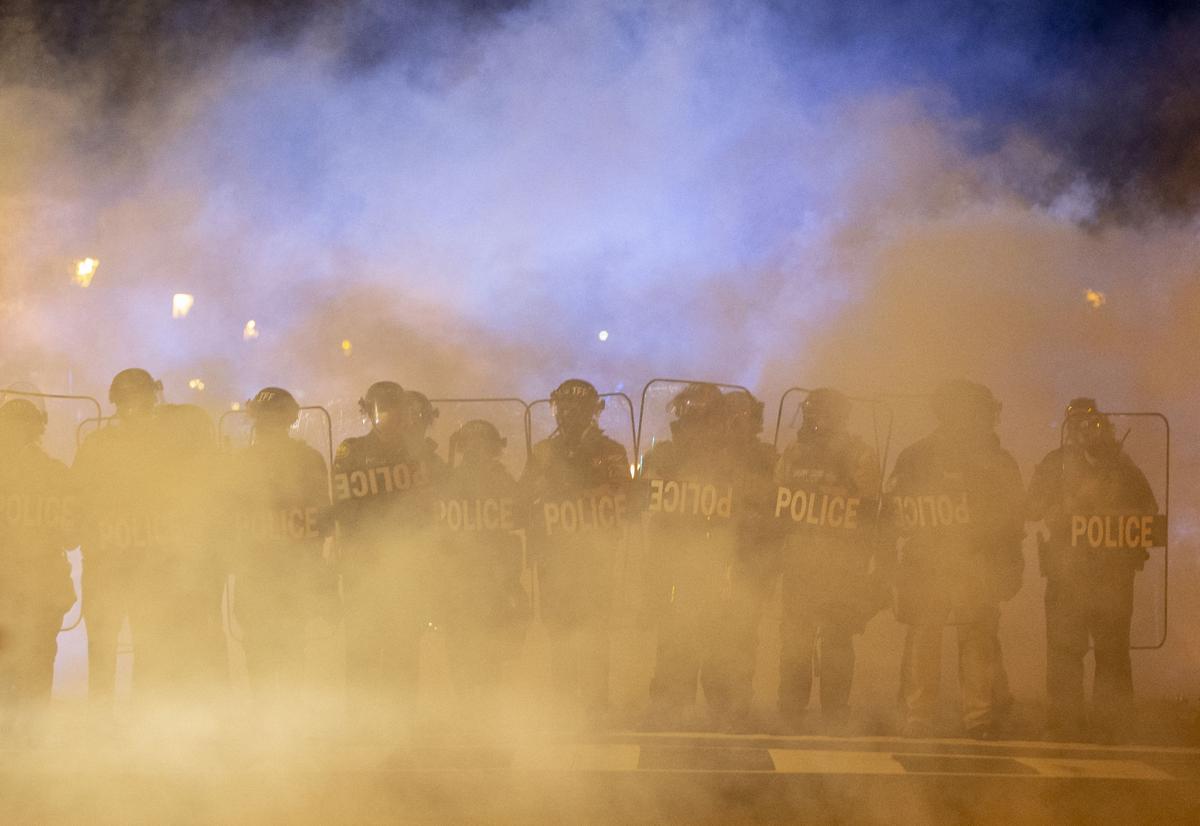 Police officers line up on Caroline Street downtown to disperse protesters on the night of May 31. 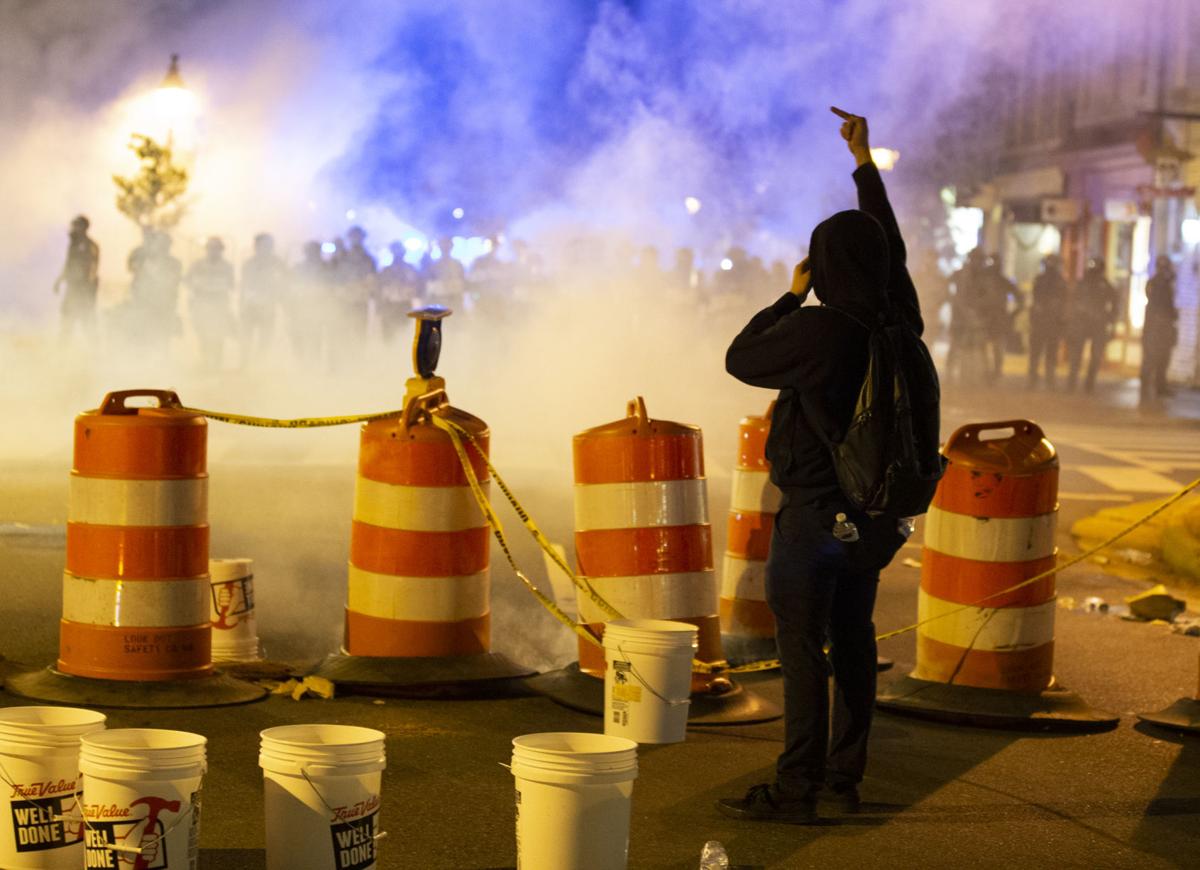 Protesters face off against police in downtown Fredericksburg, Va. on Sunday, May 31, 2020 following a day of largely peaceful protests around the area. 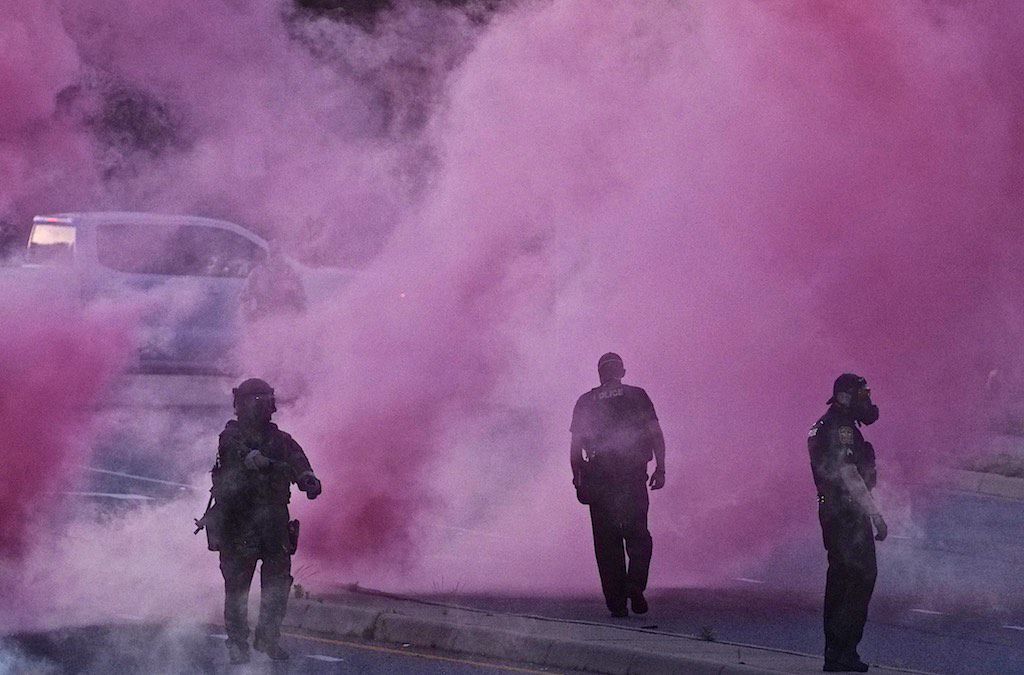 Black Lives Matter protesters in downtown, US 1 bypass and along Cowan Boulevard near the Fredericksburg Police Station on Sunday, May 31, 2020. 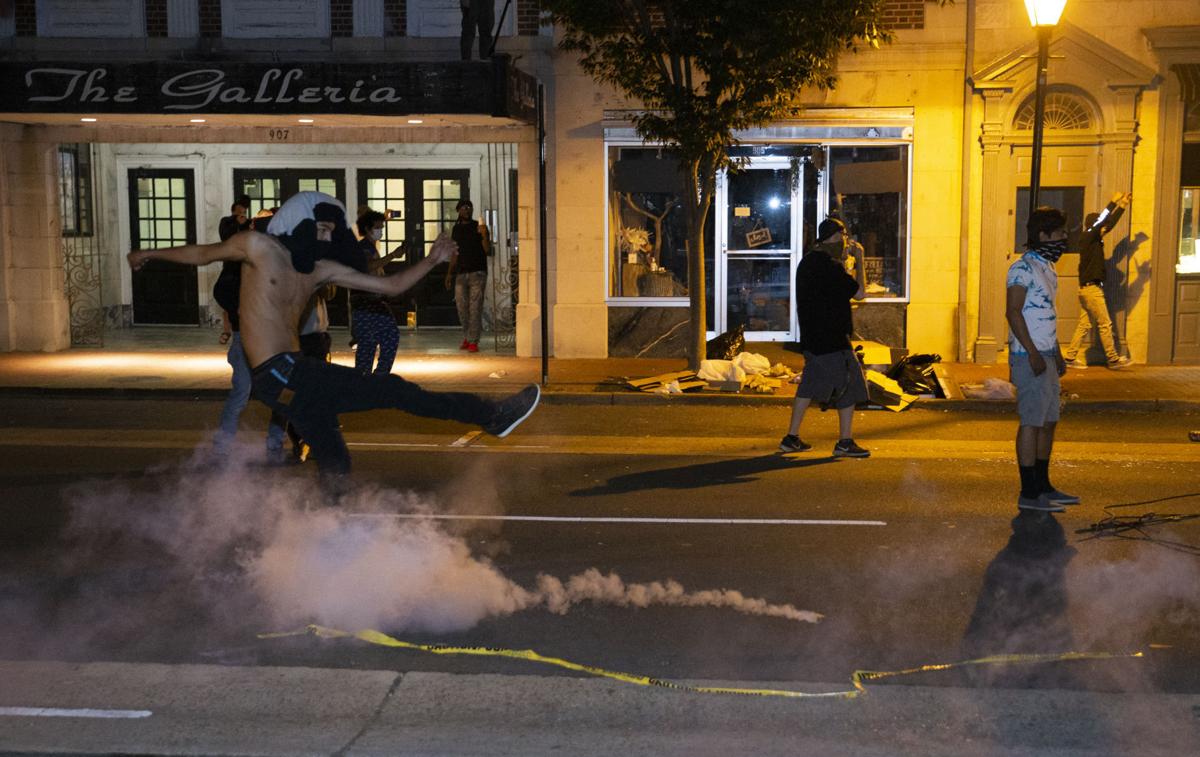 A protester kicks a gas grenade away during a confrontation with police in Fredericksburg, Va. on Sunday, May 31, 2020.

Controversial actions taken by police during the early days of the social justice protests in Fredericksburg were justified and carried out according to department standards, according to an internal review released Thursday by city police.

The 16-page report put out by Police Chief Brian Layton lists multiple violations of law and acts of vandalism in late May and early June that led police to use at least two types of non-lethal gas and rubber projectiles against protesters. Layton said the report is backed up by mounds of documentation and body camera footage.

Local protesters, mostly younger residents in their late teens and early 20s, have continually expressed anger about those uses of force, and have been demanding an explanation from the chief. Layton, who at one point apologized to the protesters, released his response Thursday.

The report contradicts reports from multiple protesters, who have repeatedly claimed there was nothing happening during those early protests that merited such a response from police.

The only act deemed inappropriate in the police report involved the late June 1 arrest on College Avenue of an alleged curfew violator. Police determined that the physical force used in that arrest was not in compliance with department standards and the officer was subsequently fired. Layton declined to elaborate, saying it was a personnel matter.

The person who received that summons declined medical treatment. He was one of about 50 demonstrators cited for violating a curfew the city put in place late May 31. The curfew law has since been ruled unconstitutional by a General District judge. That ruling has been appealed to circuit court.

Local marches spurred by the May 25 death of George Floyd during a police arrest in Minneapolis began May 30.

Shortly after midnight on May 31, someone had firebombed police headquarters, damaging a police memorial outside the building, according to the report. The arsonist, who has not been identified, then set up an "improvised explosive device" outside the front door that caught fire but did not explode. That device consisted of two bottles of a flammable liquid and a wick, Layton said.

Later that Sunday, the report states, there were multiple large but peaceful demonstrations in the city that required no police involvement, though police did receive reports about planned violence in the evening that included setting fire to the Rappahannock Regional Jail and the planned looting of a jewelry store.

Protesters have continued to march in smaller numbers, and police said that with the exception of the first day or two, the protests have been overwhelmingly peaceful. The report indicates that police believe some of those involved early on were part of the Charlottesville demonstrations in 2017 and were associated with Antifa.

By 5 p.m. on May 31, the report states, the group of about 300 people  blocked entire lanes of traffic in the downtown area and ignored police directives to get out of the roads. By 7:43 p.m., the group began marching on Princess Anne Street toward U.S. 1, blocking all traffic on the road and at one point kneeling in the road.

The report refers to one incident in which the demonstrators approached a person and began threatening him. Police intervened, and claim protesters later began throwing traffic cones at police cruisers and city signs.

The protest moved onto U.S. 1, where the report states that both the northbound and southbound lanes were blocked. Police attempts to get the highway opened, in part to allow access to Mary Washington Hospital, were met with insults and profanity, the report says.

At 8:29 p.m., after what the report says was more than three hours of illegal conduct, the city police Tactical Field Force was activated. The TFF is equipped with special uniforms, equipment and training designed to handle disorderly crowds.

The report goes on to outline four separate uses of force that were all deemed appropriate. The first occurred in the 2100 and 2200 blocks of Cowan Boulevard as the crowd moved toward the police station after being told it was an "unlawful assembly" and ordered to disperse.

A TFF officer deployed a handheld red smoke canister onto Cowan Boulevard to "gauge the reaction" of the advancing crowd. A demonstrator picked up the canister and threw it back toward police officers stationed at Todd Bahr Drive, the report says.

According to the report, police then used the more gas in an attempt to disperse the crowd while continuously broadcasting declarations of unlawful assembly. Demonstrators retreated and later began banging on police and civilian vehicles in the area. Rubber projectiles were unleashed at that point in an effort to get the protesters to leave.

The second described incident was also in the 2100 block of Cowan Boulevard. The report states that a demonstrator punched an officer in the chest after being ordered to get out the roadway. The officer responded with the use of Oleoresin Capsicum spray toward the protester's face; the protester ran into the crowd and was not detained.

The report says two off-duty police officers responding to the area had their personal vehicle damaged by demonstrators. One marked cruiser from another police agency was kicked and had a large dent put in its rear door.

As the protesters retreated back toward the downtown area, police said they continued to block roadways and yell obscenities. Someone spray-painted a fence on Brent Street and a vehicle on Stafford Avenue and made threats that they were going to "burn down the city," according to the report.

"BLM," an obvious reference to the Black Lives Matter movement, was spray-painted on a police vehicle. Some reports, such as burglary at a downtown jewelry store, turned out to be unfounded, the report states.

The third incident outlined in the report occurred about 10 p.m. in the downtown area. Police described a "chaotic" situation that included yelling, revving of engines and the blocking of streets.

Commands to disperse were again ignored and threats of arrest proved to no avail, police said. Smoke canisters and rubber bullets were used as demonstrators threw rocks at police as they ignored orders to leave, the report states.

The fourth incident listed in the report began immediately after the third one ended, police said. It occurred in the 800 block of Princess Anne Street, the 200 block of Hanover Street and several blocks of Caroline Street. According to the report, large rocks were thrown, one striking a Virginia State Police trooper in the helmet and others hitting city police officers.

The awning of a business was damaged and the glass door to a business on Caroline Street was broken by concrete buckets. The city implemented an emergency curfew at 11:03 p.m. and finally got the streets clear about 1:45 the next morning.

City police said they continued to receive credible reports of threats June 1, the first full day of the curfew. Layton said the first curfew summonses were issued after 10 that night, more than two hours after the curfew took effect. He said claims that police ticketed people for curfew violations before 8 p.m. the following night are false.

June 1 also featured a confrontation between protesters and the Stafford County Sheriff's Office on the Falmouth Bridge in Stafford. Tear gas was used to push the crowd off the bridge and back into the city.

City Mayor Mary Katherine Greenlaw expressed appreciation for the police report. "I want to thank our police department for their steadfast commitment to transparency and ethical policing," she said. "This report shows that they are committed to responsible policing and addressing any violations of their commitment to safe and just policing in an expedient manner."

Greenlaw added that the city is fortunate to have a "dedicated department that performs its role with great responsibility and responsiveness."

Police said the preliminary report—as well as body-camera footage, incident reports, 911 calls, and other information collected in the two-month-long internal review— will be given to the Police Executive Research Forum for an independent review.

PERF expects to complete its review in six to eight months. It also plans to be in the Fredericksburg Aug. 25-27 to hear from members of the community. 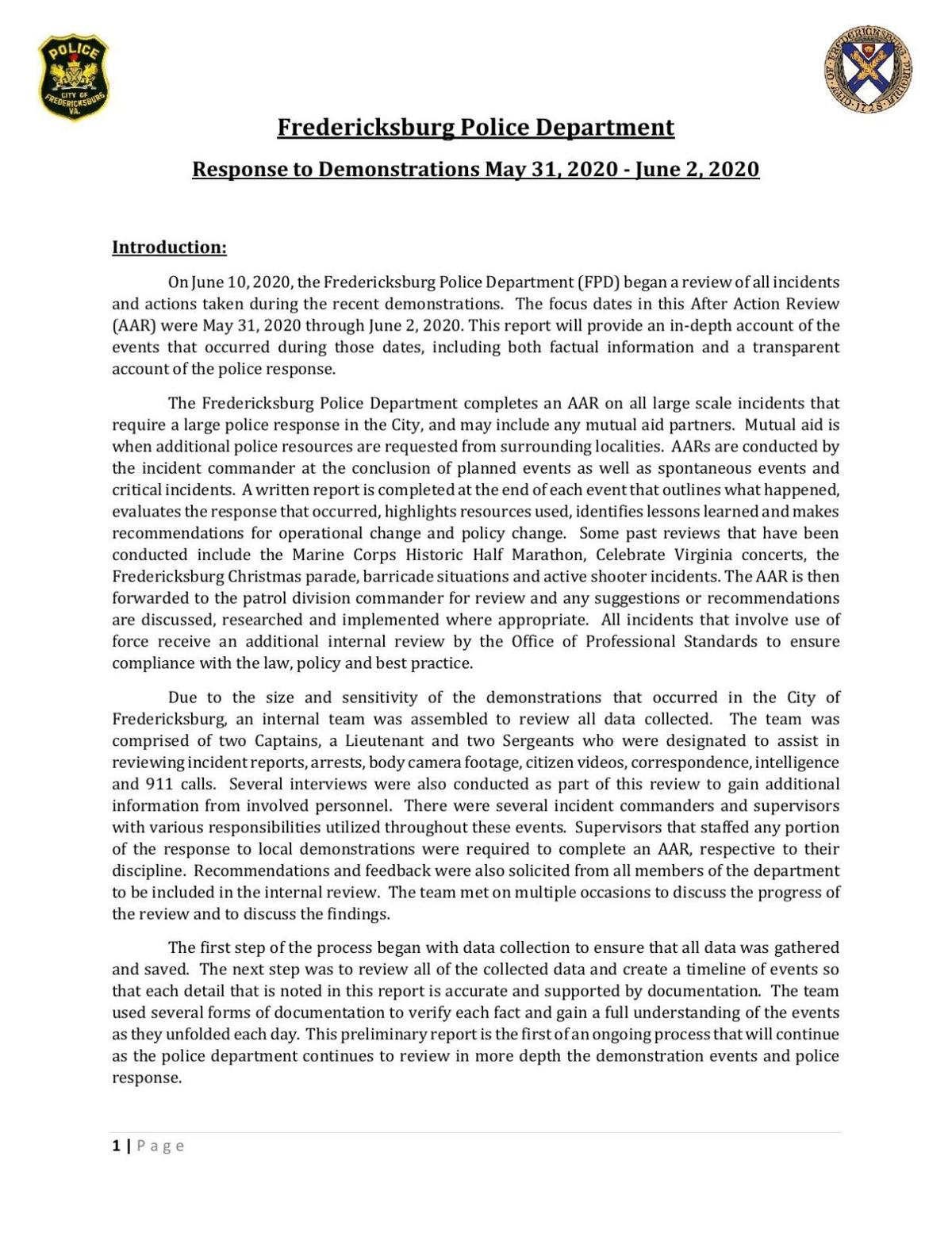 A Spotsylvania County man admitted Friday that he lied on federal forms so he could purchase multiple firearms for a known felon and gang member, federal authorities said.

Search in Stafford ends with arrest

A Stafford County man was arrested late Monday following a nearly 90-minute search that included a drone and a bloodhound, police said.

Police officers line up on Caroline Street downtown to disperse protesters on the night of May 31.

Protesters face off against police in downtown Fredericksburg, Va. on Sunday, May 31, 2020 following a day of largely peaceful protests around the area.

Black Lives Matter protesters in downtown, US 1 bypass and along Cowan Boulevard near the Fredericksburg Police Station on Sunday, May 31, 2020.

A protester kicks a gas grenade away during a confrontation with police in Fredericksburg, Va. on Sunday, May 31, 2020.