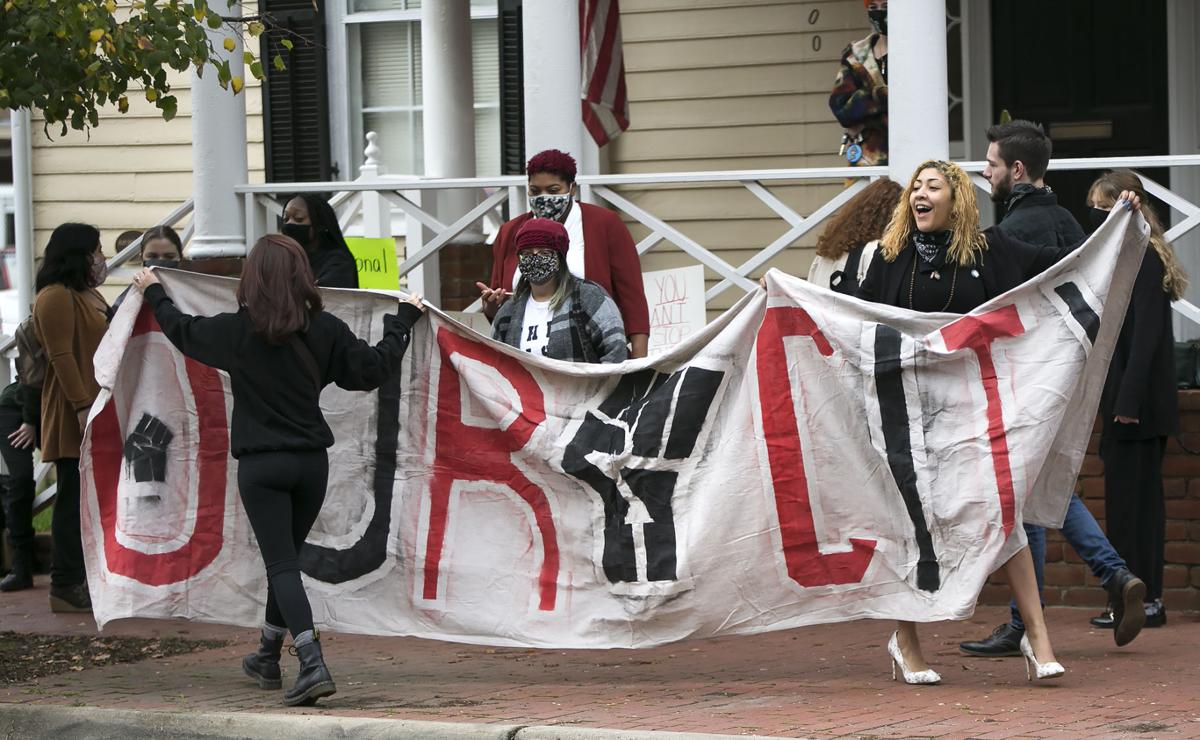 Protesters and protest supporters unfurl a banner across the street for the Fredericksburg Courthouse on Friday. 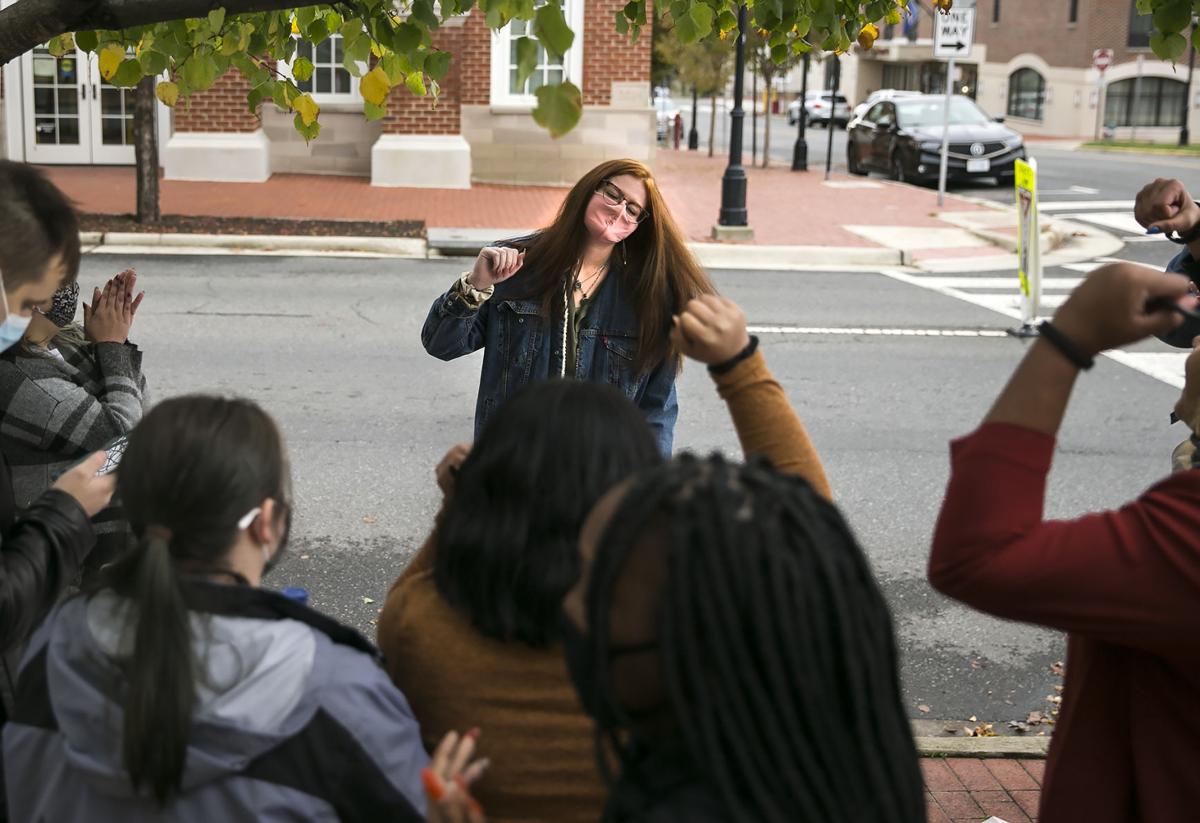 After leaving the Fredericksburg Courthouse on Friday, a protester tells a group of supporters that her curfew violation charge was dismissed. She said she was working at the Southpoint Target during the protest that resulted in the charge. 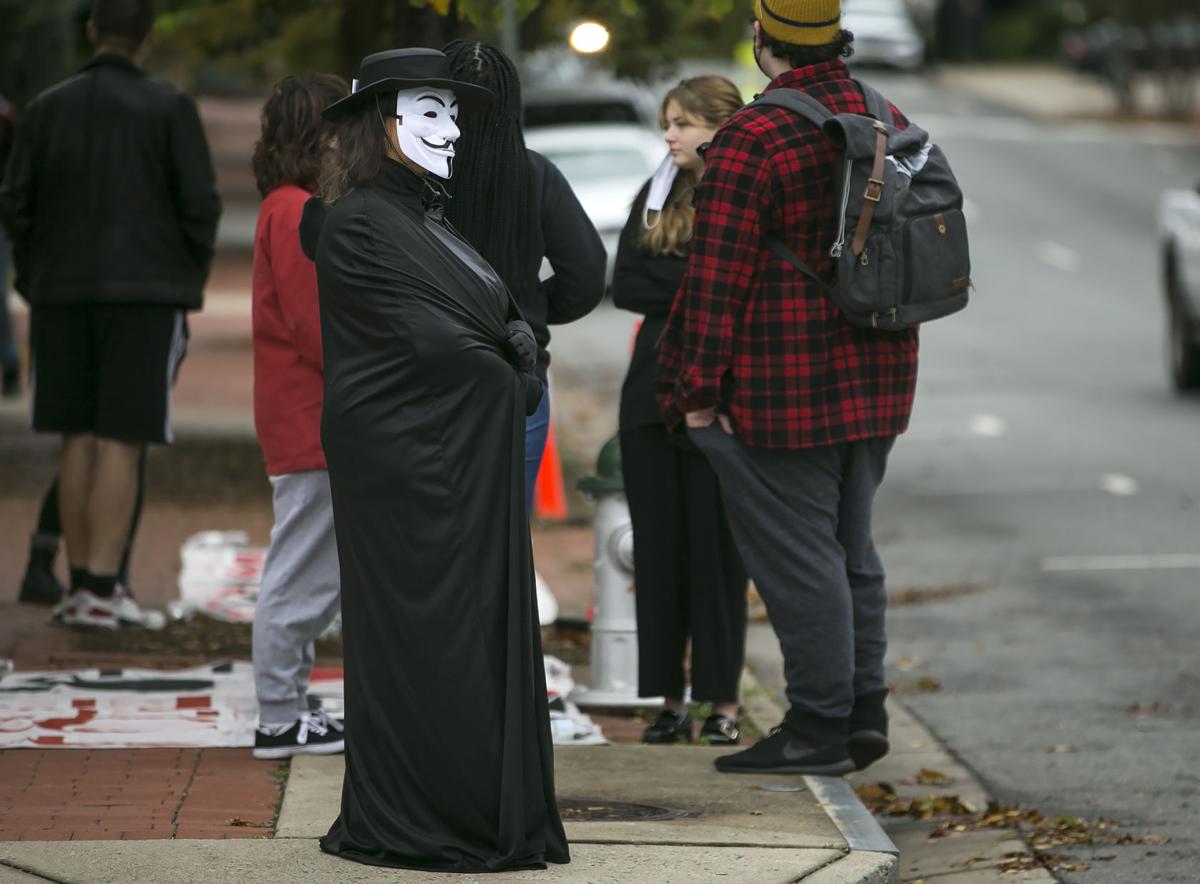 A woman who identified herself simply as ‘Z,’ dressed as a character from the movie ‘V for Vendetta,’ stands with protesters and protest supporters downtown.

A number of people will be donating free labor in Fredericksburg, thanks to a no-longer-in-effect city curfew that at one point was ruled unconstitutional.

Nearly 30 people took a deal Friday in Fredericksburg General District Court that will allow curfew violation charges to be expunged from their records after they complete 15 hours of community service in the city. The deal gives them six months to satisfy the requirements.

The 30 or so who took the deal represented about half the cases in court Friday stemming from the early days of the social justice protests in the city that followed the death of George Floyd in Minneapolis. Most of the cases heard before Judge Gene Woolard on Friday involved the 8 p.m. curfew that was in effect for several days in early June. Other charges included pedestrians being in the roadway and obstruction of justice.

Close to 20 of those who were not offered or did not take the deal were acquitted, either following a trial or because the officer who summoned them has since left the city force and did not appear in court. Another 10 to 12 were convicted and fined up to $500.

Woolard on July 31 had ruled the city’s hastily enacted curfew law unconstitutional. Attorney Christopher Reyes, one of several lawyers who agreed to represent the protesters for no charge, argued that only the state legislature or the governor had the authority to enact a curfew.

Reyes represented Ryan Vera Brown, the only protester whose case was heard July 31. Supporters outside the courthouse swarmed Brown as he left the courthouse that day following Woolard’s ruling.

But prosecutors Justin Witt and Steve Eubank appealed Woolard’s decision to circuit court, and Judge Joseph Ellis later overturned the ruling and said the city was within its rights to enact the curfew and make it a Class 1 misdemeanor.

A Class 1 misdemeanor carries up to 12 months in jail, but prosecutors did not seek jail time.

Brown was one of those found guilty Friday. He received a $500 fine, with $250 suspended. However, Reyes announced that Brown was appealing his conviction to circuit court, where the case could end up before a jury.

Friday’s acquittals came for various reasons. One man who was charged shortly after the 8 p.m. curfew was cleared after Woolard ruled that a city police Facebook post suggested that summonses would not be issued before 8:30 p.m. Another man was cleared after attorney Jim Ilijevich argued that he was homeless and had nowhere to be but on the streets.

The crowd gathered outside was smaller and less vocal than the one on hand July 31, with the notable exception of one man. The man could be heard from inside the courtroom, and spent parts of the day jumping on the court building, shouting at the windows and challenging police officers and deputies who came outside.

The law enforcement officers mostly ignored the man for much of the day, but eventually he was charged with disorderly conduct, police said.

A man who was arrested Jan. 30 after he fell through the ceiling while allegedly spying on women in a Stafford County locker room is now accus…

Andrew J. Haefele, 37, and Donald Ray Compton Jr., 35, both of Spotsylvania, and Charles E. McKinney, 35, of Maurertown, all received three years to serve in connection with a June 18 videotaped incident.

Protesters and protest supporters unfurl a banner across the street for the Fredericksburg Courthouse on Friday.

After leaving the Fredericksburg Courthouse on Friday, a protester tells a group of supporters that her curfew violation charge was dismissed. She said she was working at the Southpoint Target during the protest that resulted in the charge.

A woman who identified herself simply as ‘Z,’ dressed as a character from the movie ‘V for Vendetta,’ stands with protesters and protest supporters downtown.