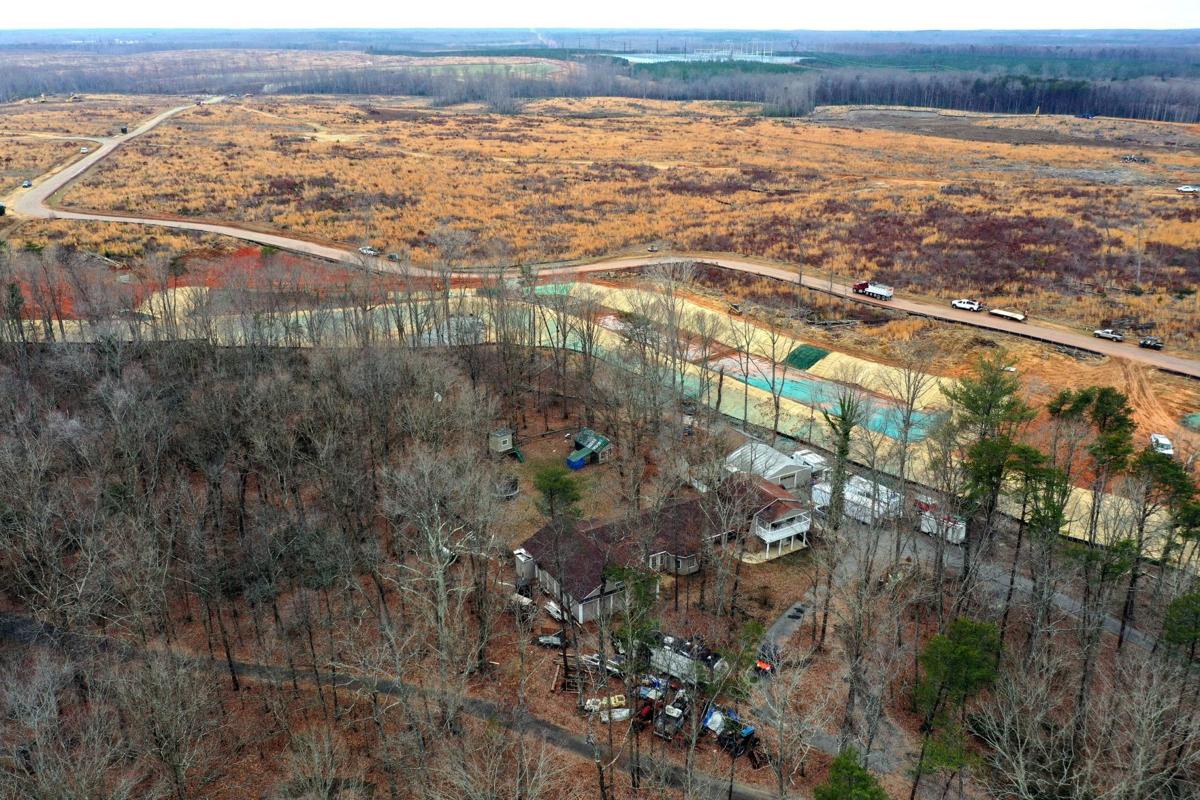 Neighboring property owners and critics of Utah-based Sustainable Power Group’s $615 million solar power facility on more than 6,300 acres in the Wilderness area have accused the company of violating agreed-upon use permits. 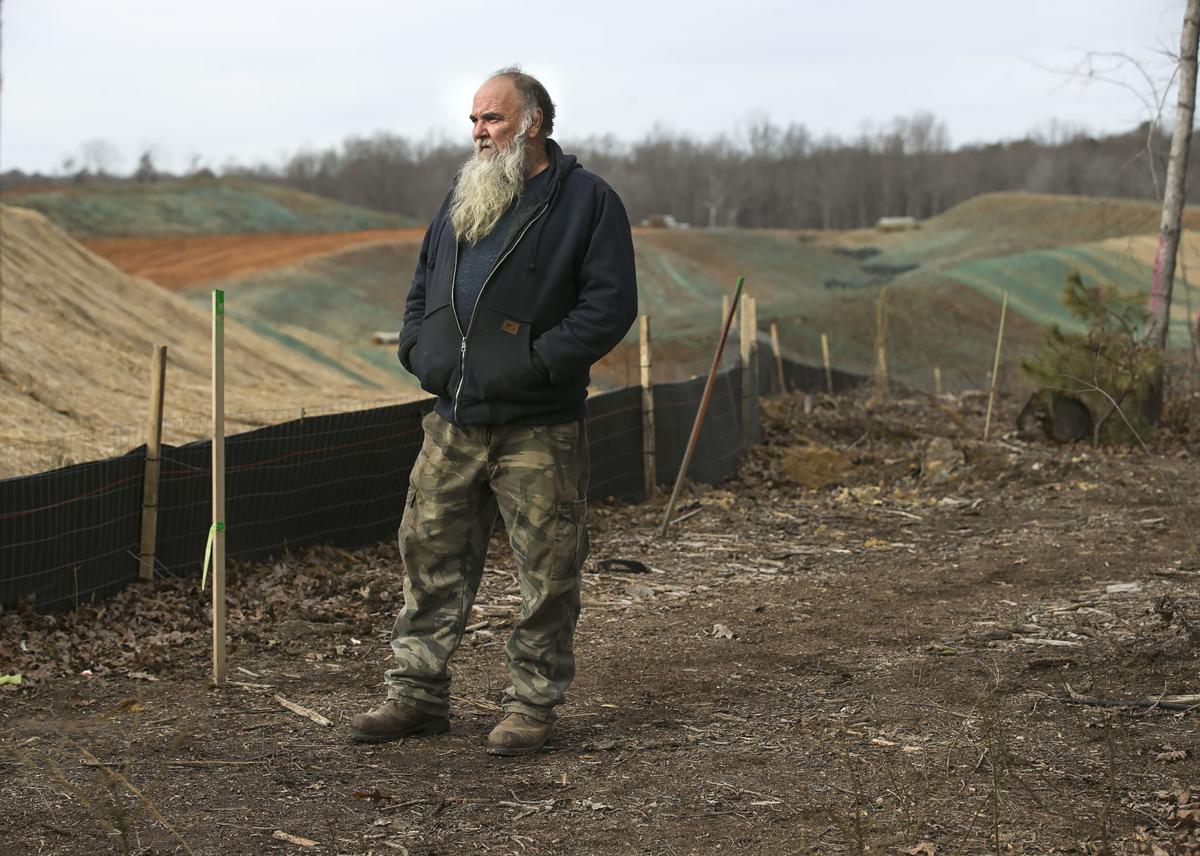 Michael O’Bier stands along his property line next to the solar plant being built by sPower. 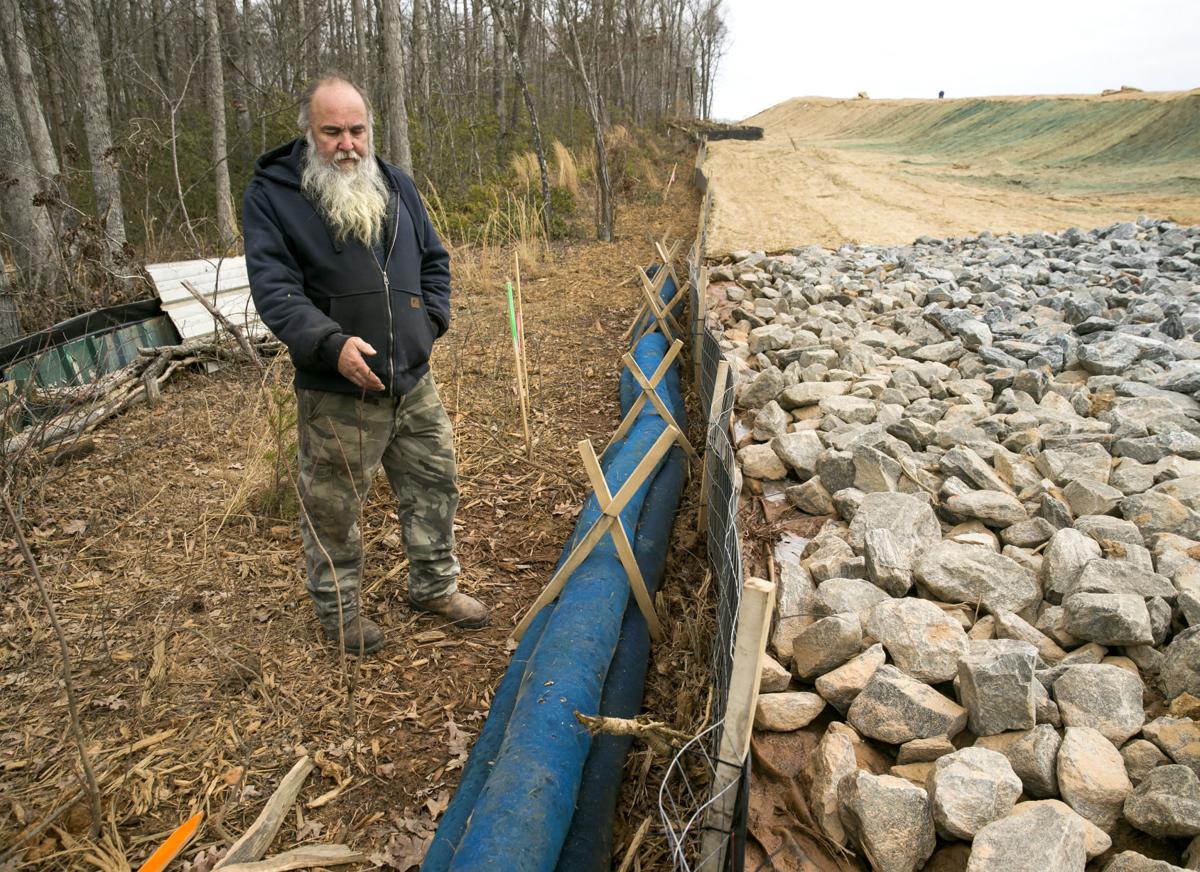 Michael O’Bier stands at the back of his property, where he has installed a makeshift barrier to redirect runoff. 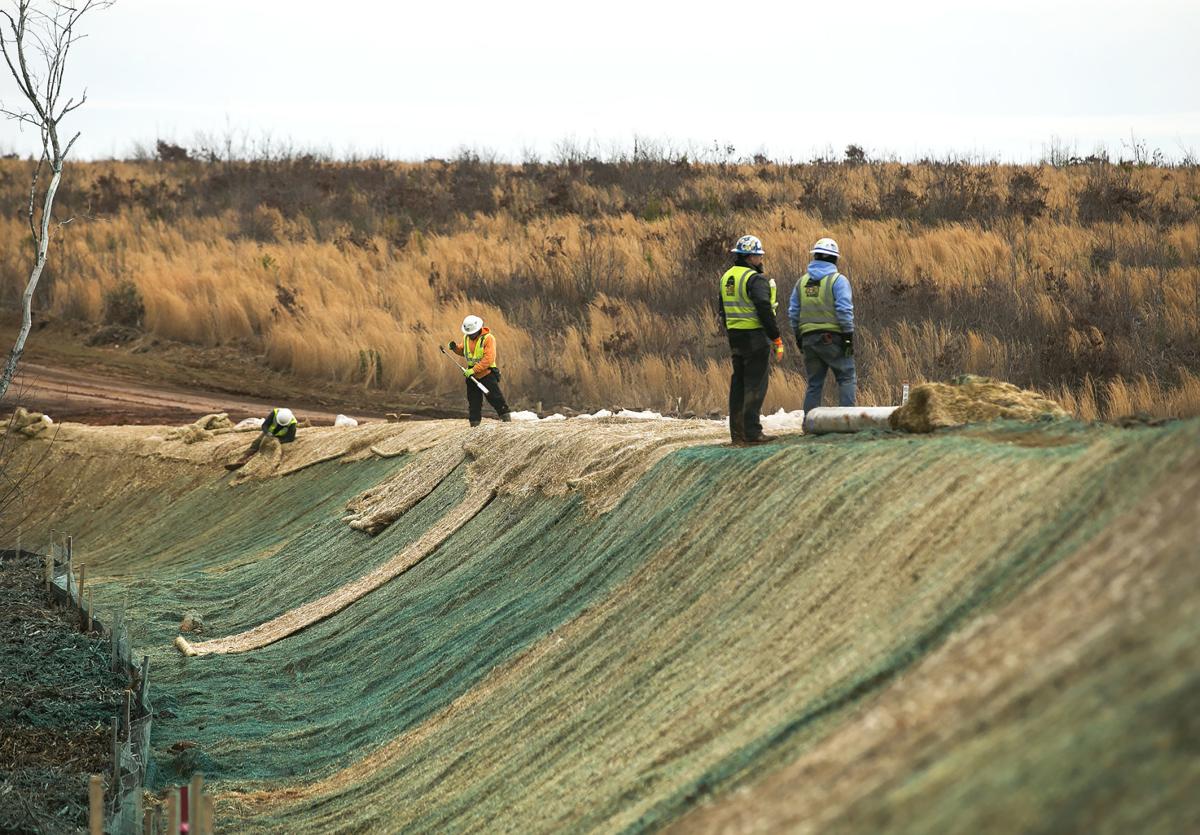 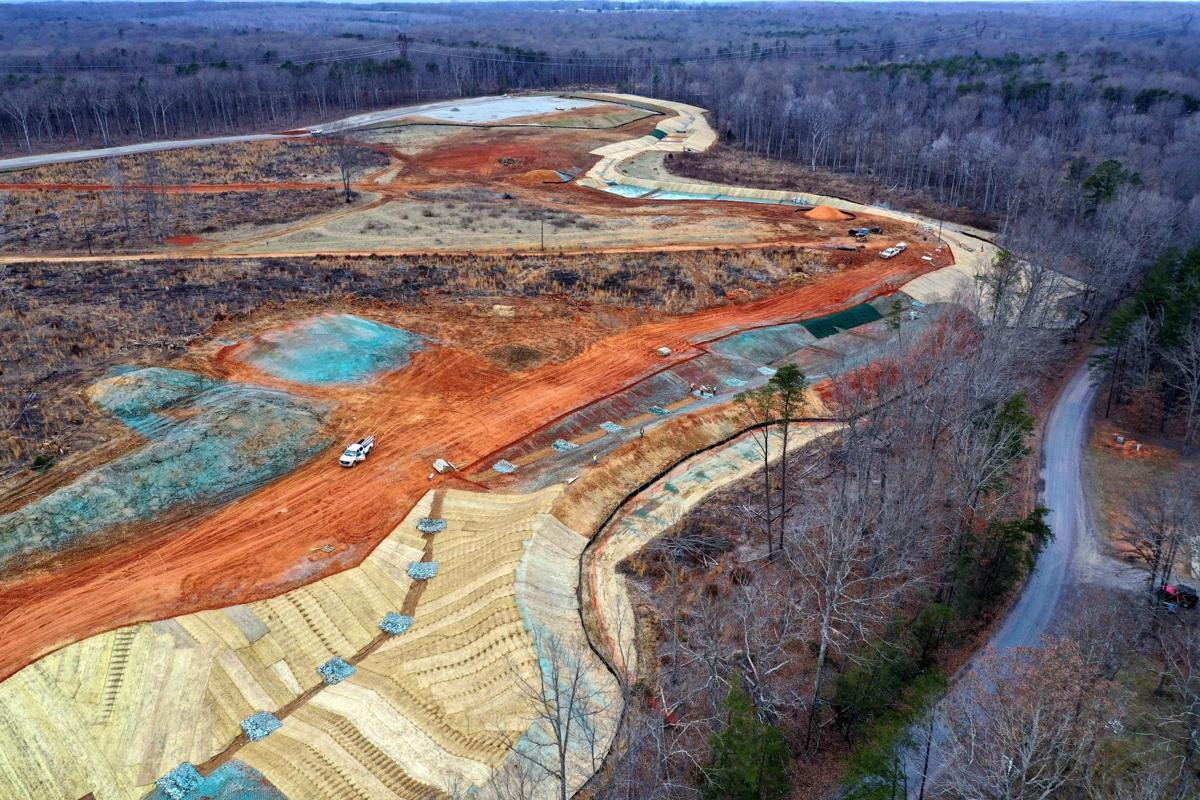 Neighboring property owners and critics of Utah-based Sustainable Power Group’s ambitious $615 million solar power facility on more than 6,300-acres in the Wilderness area have accused the company of violating agreed upon stipulations in the special-use permits.

The solar project in rural western Spotsylvania County is underway, and some neighbors are finding problems with how construction is being handled.

Crews have been at work for months on the first—and most extensive—phase of one of the nation’s largest solar projects, transforming sections of fields and woodlands in the Wilderness area into red-clay paths and mounds in preparation for 1.8 million solar panels. The panels will supply energy to the grid—electricity that’s already been spoken for by tech giants Apple and Microsoft, along with the University of Richmond.

Neighboring property owners, including critics of the Sustainable Power Group project, have been watching, and say they discovered violations of the agreed-upon stipulations in the special-use permits. They have filed complaints with the county’s Board of Zoning Appeals.

The company says it is adhering to the regulations.

A hearing was set for March for three complaints. The county said two violations—failing to screen staging areas and disturbing land too close to three graves marked by old stones—have since been addressed.

The remaining complaint alleges work has intruded into the agreed-to 100-foot area where there is supposed to be a vegetative buffer shielding solar panels from neighboring properties.

At the most recent Board of Supervisors meeting, County Administrator Ed Petrovitch announced that “a zoning violation” had been issued for “non-compliance” with the SUP. He added that until the violations were fixed, there would be “no zoning approval” for other portions of the three-parcel project.

That issue has since been resolved, according to the county, meaning permits can again be approved.

As the work continues, neighboring property owners continue a battle they have been fighting since shortly after the solar project was announced in 2017.

The Board of Supervisors approved special-use permits in April for the solar farm, a decision that followed contentious debate and meetings for more than a year. The project pitted sPower and its supporters against local residents who didn’t want the 500-megawatt facility built next to them.

Throughout the proceedings, the Utah-based company’s representatives vowed to be a good neighbor and promised millions in financial donations should the company be allowed to build a $615 million facility on more than 6,300 acres, with the 1.8 million solar panels to be installed on the three tracts.

Critics, some of whom formed a group of concerned citizens, raised a range of issues during the process, including negative impacts on the land and surrounding properties and those who live there.

The company has already delivered on several of its promises to give back to the community.

But Michael O’Bier, a 63-year-old retired plumbing contractor, doesn’t care about the financial promises. He’s more concerned about his property, which he said is “ground zero.”

He has been a frequent speaker at Board of Supervisors meetings during the process and after, saying his land had already sustained erosion and flood damage from previous owners of the site. He said he expected more to come when work started on the solar farm.

His property is the one cited in the zoning violations.

“It’s been a war zone,” O’Bier said as he walked the boundary of the three-acre wooded plot he shares with his wife and their dogs. His long, gray beard jiggled as he showed photos and videos on his cellphone and repeated his complaints about work on the solar project, which ranged from muddy runoff water streaming through his property to having portable toilets set up just across his property line. He showed one photo of a portable bathroom almost completely submerged in muddy water after a recent rain.

He and nearby property owners Sean Fogerty and Dick Genaille said the toilets were moved after new Livingston District Supervisor Barry Jett took up the issue.

Taylor Keeney, sPower spokeswoman, said in an email that the company is working “diligently” to address any issues and is “adhering to stormwater measures that are much more stringent than county and state stormwater requirements.”

She added that “sPower has gone above and beyond to remediate what was going on on Mr. O’Bier’s property prior to sPower even starting its project. sPower has been working closely with the county and Mr. O’Bier to address his concerns”

She said the company will continue to monitor the project and handle any issues that might arise.

Also, sPower representative Daniel Menahem accused Fogerty and others of “trespassing onto sPower’s property, flying drones over the site and installing surveillance cameras in an attempt to pin SUP violations on the project.”

The men brushed off the allegations on the recent visit, as they walked near the 6-foot red-clay berms that run along two sides of O’Bier’s property. His plot occupies the end of Chancellor Meadows Lane. Several other homes stand on wooded lots along the road, too, but none are quite as close as O’Bier’s.

He thinks sPower is “just ignoring” the buffer agreement.

Genaille, also a Fawn Lake resident, thinks the damage has already been done, it and portends bad things going forward.

“Basically, I think everybody who lives next to it will have problems based on what’s happening here,” he said.

A sediment pond stretches several hundred feet along the berms on the sPower side. Beyond that, big earth-moving machines clanked and revved while churning through the dirt on the recent sunny morning. Trucks and other work vehicles also drove along a dirt road in the ever-changing field, a path that runs near the berms along the properties of O’Bier and his neighbors.

O’Bier pointed out a corner of his property where small tubes slowly pumped water over the berms into an area designed to filter the water, and keep it from his side of a riprap fence.

He said water has run so fast from that area that it cut its own path through his property toward a nearby creek. He said another spot on the road leading to his house has flooded, too.

As he, Fogerty, Genaille and Jett stood at the edge of O’Bier’s property on the recent morning, someone noticed water trickling past the riprap and forming a small puddle on O’Bier’s property.

“I think I inherited a mess,” said Jett, looking at the busy machines.

Jett knew about the controversial project—it was the primary topic in the election for the Livingston District supervisor seat last fall and a reason why his predecessor, who supported the solar project, did not run for reelection.

Jett made a point of saying people need to accept the project has been approved and is being built, so it’s best to work together. But Jett stressed that he’s not happy with some of the things he’s seen and heard.

At the most recent board meeting, he said “it was a shame some of the stuff I saw” during a visit earlier in January. Jett said he didn’t want to give details, but called some of what he saw “unreal.” He said that while “things take time” and people need to be patient, “sPower needs to abide by the SUPs.”

O’Bier, Fogerty and Genaille are happy with the supervisor so far, saying he has helped make sure their complaints are heard. And the group has more than a dozen complaints, including the one yet to be heard by the zoning appeals board.

Nevertheless, they are critical of the county, saying inspectors should have caught the problems they cited. They wonder if there are more problems deeper inside the site, where they can’t see what is happening.

County officials believe they has enough oversight for the project.

Fogerty and Genaille plan to keep an eye on the work, and want other supervisors to visit the project site to see what is happening.

O’Bier knows solar panels will one day cover the neighboring dirt field that used to be wooded. He said he would like to sell the property, but worries there won’t be many takers.

“Unless,” he said, “I can find someone who loves solar.”

8 children in van killed in crash in Alabama

8 children in van killed in crash in Alabama

Drone footage of the solar facility construction site in Spotsylvania

Neighboring property owners and critics of Utah-based Sustainable Power Group’s $615 million solar power facility on more than 6,300 acres in the Wilderness area have accused the company of violating agreed-upon use permits.

Michael O’Bier stands along his property line next to the solar plant being built by sPower.

Michael O’Bier stands at the back of his property, where he has installed a makeshift barrier to redirect runoff.

Neighboring property owners and critics of Utah-based Sustainable Power Group’s ambitious $615 million solar power facility on more than 6,300-acres in the Wilderness area have accused the company of violating agreed upon stipulations in the special-use permits.