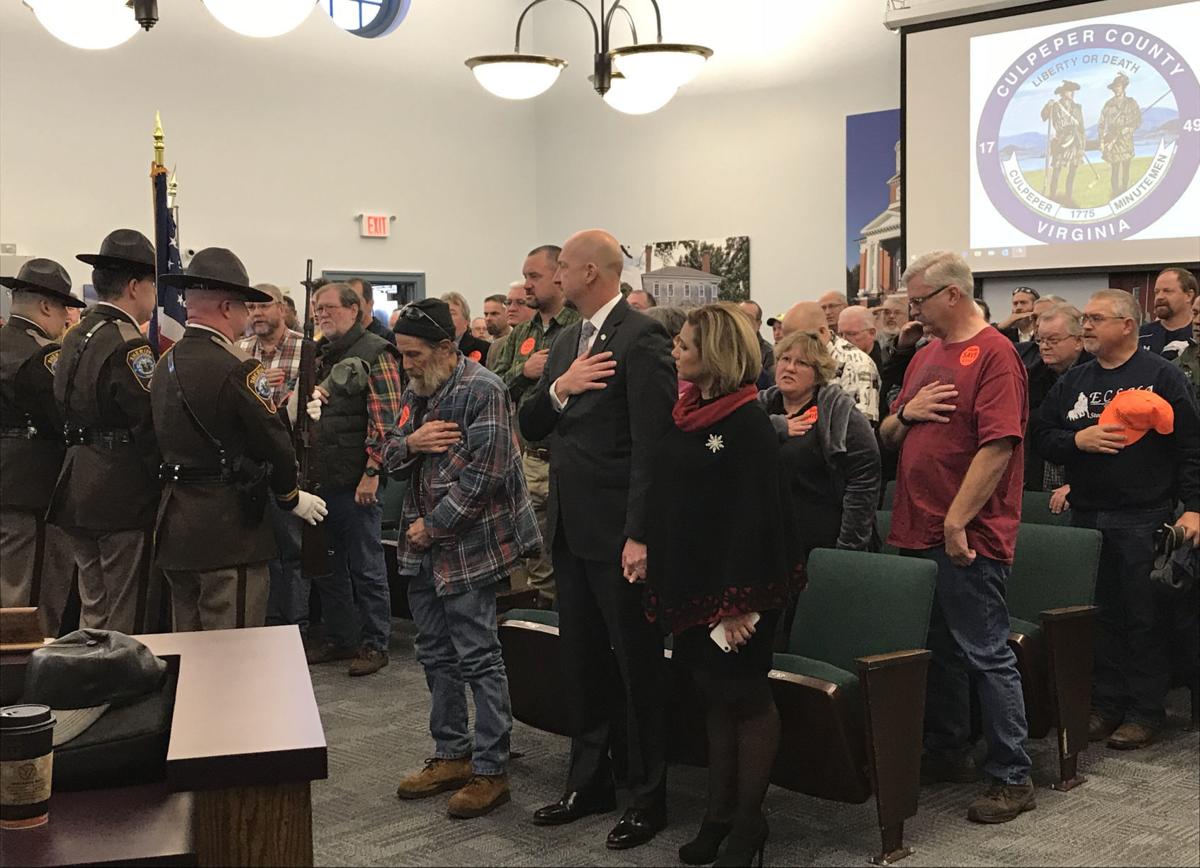 Members of the public recite the Pledge of Allegiance at Tuesday’s Culpeper County Board of Supervisors meeting. A resolution in support of the Second Amendment was adopted. 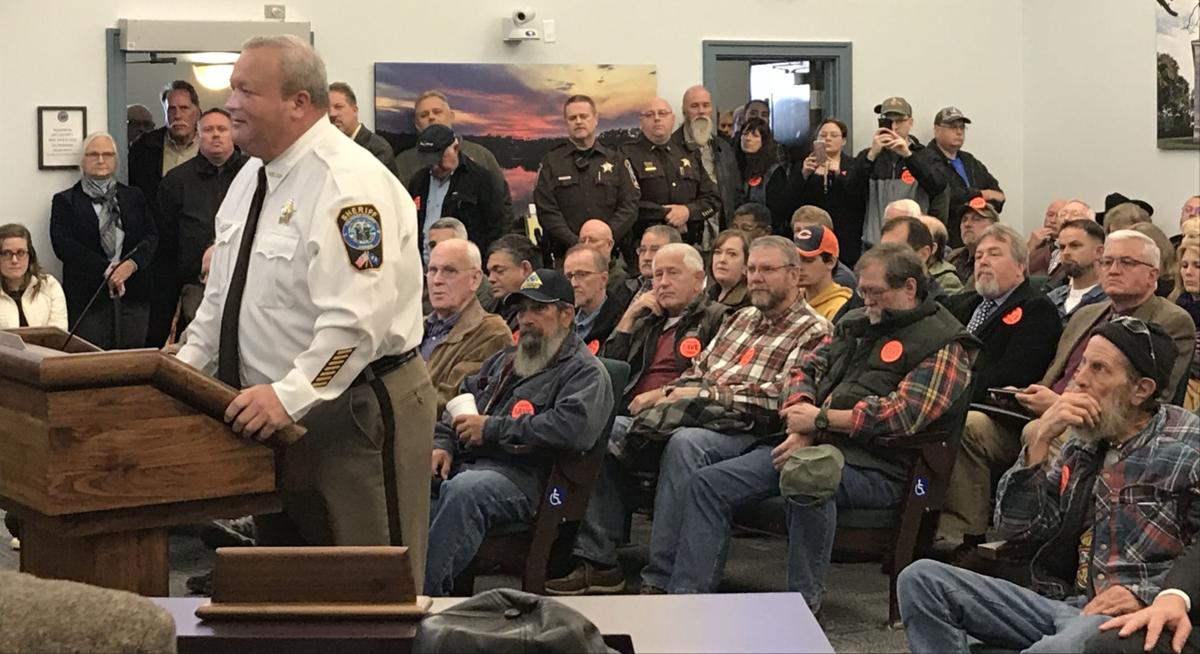 Culpeper Sheriff Scott Jenkins talks about gun rights during the Board of Supervisors meeting Tuesday morning. 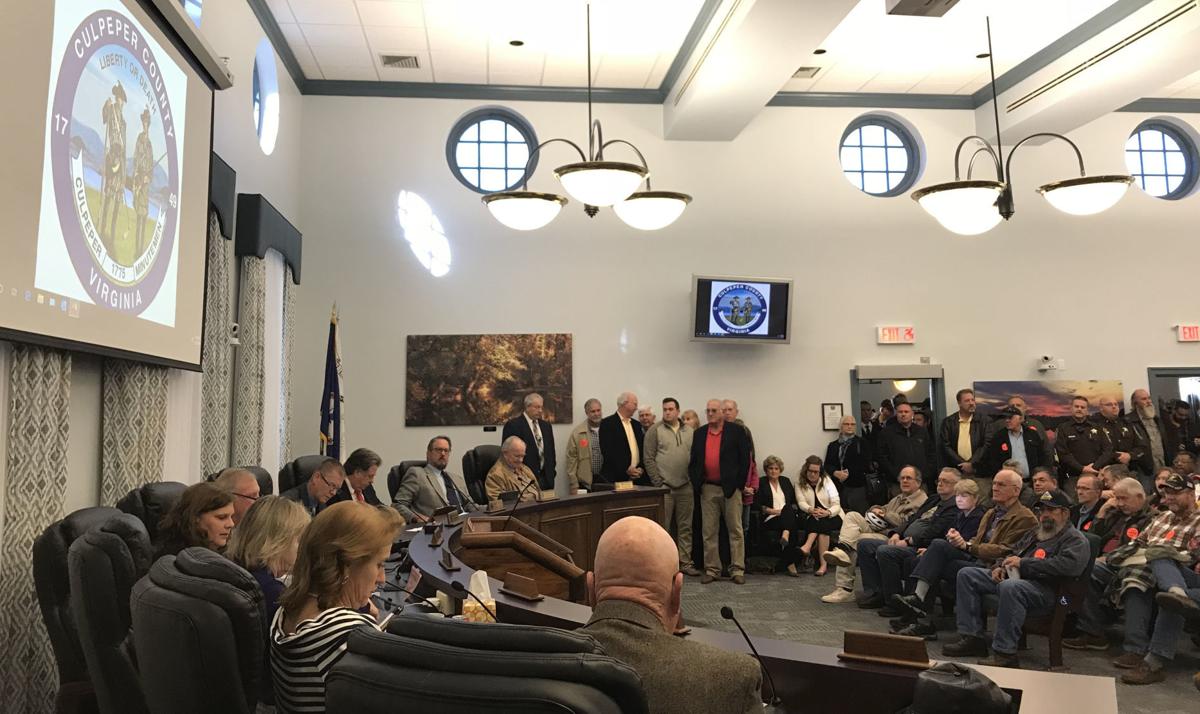 The Culpeper County Board of Supervisors considers a resolution in support of the Second Amendment.

Citizens packed the Culpeper Board of Supervisors morning meeting Tuesday for a hot topic discussion on an adopted resolution declaring the locality a Second Amendment Constitutional County.

Many donned bright orange stickers reading, “Guns save lives,” and the local sheriff vowed to deputize scores of residents, if necessary, to push back on potential state-imposed gun restrictions.

The seven-member elected Culpeper County Board unanimously passed the resolution, joining a growing number of localities doing so in reaction to expected gun control legislation in the now Democratic-controlled Virginia General Assembly.

“All my adult life, in the military and in local government, I’ve sworn to uphold the Constitution and I’ll be damned if any politician down in Richmond or anywhere else is going to get me to change my mind,” said Supervisor Bill Chase, a Vietnam veteran.

The overflow audience in attendance erupted in applause at this statement as Chase invited Culpeper County Sheriff Scott Jenkins to the podium to share his thoughts on the Second Amendment.

“The right to bear arms—some believe that the Second Amendment gives us that right, when in fact it’s a God-given right. If you don’t believe in God, it’s a law of nature that every creature can defend their lives from threats,” Jenkins said.

The sheriff, elected in November to a third term in office, said he would not violate his oath of office by declining to enforce new gun laws, but asserted he was prepared to act otherwise.

“If the legislature decides to restrict certain weapons I feel harms our community, I will swear in thousands of auxiliary deputies in Culpeper,” Jenkins said. “There’s no limit to the number of people I can swear in.” The sheriff added, “Personally, I don’t think some of the bills that are proposed will pass, I don’t think we’re that far left in Virginia.”

Jenkins said thousands of Culpeper citizens hold concealed carry permits, including for guns with large capacity ammunition magazines, an issue that could see attempts at legislative restriction next year. He quoted Founding Father Richard Henry Lee, of Virginia, in further emphasizing his point: “A militia, when properly formed, are in fact the people themselves and include all men capable of bearing arms.”

Jenkins said it was “ridiculous” and “insane” to restrict magazine capacity, and so are attempts to punish the majority for the evil deeds of a few.

“You can create just as much harm and death in a school with an environment of an active shooter with a shot gun in five or 10 minutes as you could with most other weapons,” he said.

Culpeper County Supervisor Sue Hansohn, in supporting the resolution, said she wished the General Assembly would focus on mental health, “the deeper problems,” behind societal gun violence, she said.

“The state closed its institutions, sent them all back to the community. There are no treatment centers here. So I’m asking that the General Assembly stop this crap they are doing and look at the underlying issue which is mental health,” Hansohn said, receiving applause.

Supervisor Jack Frazier added his strong support for the resolution “as a first step in protecting our constitutional rights.”

“I am hoping that by standing by our neighboring counties that this will send a message to our governor, legislators and the folks in Richmond that the people of Culpeper County know best as to how we can protect ourselves and our families,” he said.

In recent days, Madison and Rappahannock counties adopted similar resolutions, and Orange County was expected to take action on it Tuesday night. It was Frazier who suggested calling Culpeper “a constitutional county” versus a “sanctuary county” as others have adopted, to differentiate the resolution from terminology used for sanctuary cities for undocumented immigrants.

Culpeper County Board Chairman Brad Rosenberger directed the resolution be drafted after numerous citizens contacted him about it in recent weeks. He called the end product, “a tremendous resolution, a very strong resolution, it says what we need to say.”

Retired from the U.S. Navy, resident Charles Evering was among those in attendance Monday supporting the measure. He said he came out in defense of his God-given and constitutional rights to bear arms, adding he felt such rights were very much under threat.

“When I see bills being introduced to the House of Representatives in Richmond that you can’t even train your kids on how to use a gun, that’s a little much. I’m just bound and determined that they’re not going to take my rights away,” said Evering, noting he’s been a gun owner for 50 years.

He called the resolution adopted Tuesday a start, but not all that needed to be done.

“The ultimate end for me is for the governor to realize that we got people out here that think different than he does and he ought to read the Constitution and realize that when he took his oath of office it meant to defend that Constitution, not tear it apart,” Evering said.

Not everyone in Culpeper agreed with the resolution, and members of the Culpeper Democratic Committee planned to speak against it at Tuesday’s night meeting. Reva resident Donna DeAngelis, with the Culpeper Persisters, provided an advance copy of her comments to a Washington, D.C. news station.

“As a citizen of Culpeper County, I ask that you not support a resolution that would sanction gun violence,” she stated. “It is time that common sense prevails and we all unite behind reasonably regulated, responsible, safe gun ownership.”

DeAngelis expressed support for reinstating a ban on multi-round assault-style weapons and for universal background checks, which according to most polls, she said, most Americans support.

“Our forefathers in all of our wisdom could not have predicted what a single-shot musket would become almost 250 years later,” she said.

In a recent statement, local Del. Michael Webert, R-Marshall, expressed his support for the gun resolutions.

“As most of you are aware, the Second Amendment sanctuary resolutions are not legally binding. However, it is vital to send a strong message to Richmond that we, law-abiding citizens, will not be treated like criminals because we possess certain types of firearms and firearm accessories,” he said.

Webert said he and his colleagues were working on a bill to protect counties that have passed Second Amendment resolutions so the state won’t withhold funding from the localities because of the designation.

Members of the public recite the Pledge of Allegiance at Tuesday’s Culpeper County Board of Supervisors meeting. A resolution in support of the Second Amendment was adopted.

Culpeper Sheriff Scott Jenkins talks about gun rights during the Board of Supervisors meeting Tuesday morning.

The Culpeper County Board of Supervisors considers a resolution in support of the Second Amendment.