Culpeper County resident Paul Jarosh’s butternut squash set a record at the State Fair of Virginia. It was thought to be a world record until a Michigan grower bested him by a pound and a half. 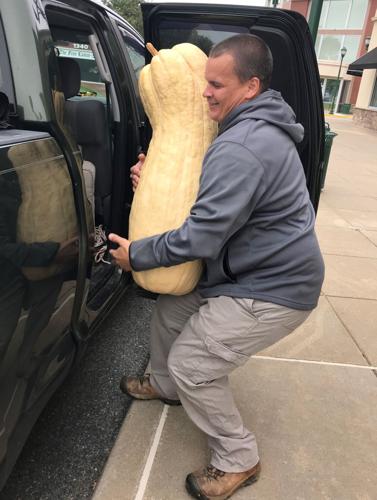 Paul Jarosh demonstrates it's important to lift with the legs when moving a 103-pound butternut squash.

Jarosh protected his pumpkin, shown here, and butternut squash by putting up a tarp to keep the rain off and wrapping them in sheets to avoid sunburn.

Paul Jarosh was so focused on cultivating big pumpkins, he didn’t pay much attention to a butternut squash that was growing by as much as a foot a week during the peak of summer.

The Culpeper County man came to realize its giant potential and did better by the butternut. He watered it consistently and applied fertilizer, put up a tarp to protect it from rain and wrapped it in queen-size bedsheets to avoid sunburn.

When monsoon-like rains hit the patch a few weeks before he planned to enter it in the State Fair of Virginia, Jarosh thought his heart would break, along with the squash’s ribs.

To avoid a side-splitting disqualification, Jarosh carted a fan to the garden to keep the fruit dry. And yes, squash is technically a fruit, not a vegetable, because it has seeds and comes from the flowering part of plants.

Jarosh’s attention to detail paid off when he realized he’d broken the Virginia record and squashed the current entry in the Guinness Book of World Records—at least temporarily. For seven days, he unofficially held the title for the biggest butternut on record, a 103-pounder as heavy as a person and bearing an uncanny resemblance to the Mr. Peanut character.

His entry was almost 40 pounds heavier than Guinness’ standing record.

But Jarosh’s chance to make his world title official didn’t last, perhaps the same way Virginia humidity can rot pumpkin vines before they even bear fruit. A fellow grower in Michigan, a friend who had been comparing notes with Jarosh all season, had his official weigh-in a week after Virginia did—and his butternut squash weighed 1½ pounds more.

Realizing that every rose has its thorns, Jarosh took it all in stride.

“He’s a much more experienced grower than I am,” said Jarosh, who’s been gardening since he was a kid but tried to grow giants for the first time this year. “It made more sense for him to have the world record than me. I just planted it in the garden because I thought it was cool.”

Jarosh and his wife, Maryellen, who live near Rixeyville, enjoy fresh fruit and vegetables but have had more produce in years past than they could eat or give away. To avoid the waste this year, he decided to convert his primary garden into a land of giants.

Using seeds he got from fellow growers—or paid as much as $10 apiece for—Jarosh planted giant pumpkins, ornamental bushel gourds and butternut squash, which has sweet orange flesh and a nutty taste.

“I had no intention of breaking a world record for butternut squash, but this one grew so rapidly, I knew I had something,” he said.

Jarosh works in Manassas, making computer chips, and documented the butternut’s boom through photos on his phone. Even though he’s also a beekeeper, he pollinated the blooms himself, to keep the genetics pure.

If you’re wondering how a person keeps a bee from its busy-ness, Jarosh was in the garden as soon as the sun rose and flowers opened. Remembering science lessons on stamens and stigmas, he brought the two together, then wrapped a twist-tie around the bloom to keep his winged friends from buzzing around.

The squash plant spread out in a Christmas-tree pattern, about 35 feet wide and 25 feet long. The fruit grew at the pointed part of the vine, as if it were a star.

Jarosh realized that the plant pretty much stopped growing once the fruit set. In the future, he plans to pinch off any flowers until the vine grows even more, thinking a bigger plant will put its energy into one big fruit.

The Culpeper man put the tailgate down on his Toyota truck to carry his treasures to the fair. He set the squash on a mattress-covered pallet and held it in place with tight cables, cradled in pool noodles so they wouldn’t cut into the hide. He also took a 174.5-pound bushel gourd, which won first in its division, and a 230-pound pumpkin that placed sixth in the state competition.

The fair’s giant exhibit of extra large pumpkins, gourds, watermelons and squash “is naturally a big attraction because most people have never seen anything like that before,” said Sarah Jane Thomsen, the fair’s education manager. “It’s definitely one of the more popular things that people come back for, year after year.”

For the week the State Fair was operating at Meadow Event Park in Doswell, Jarosh had the biggest butternut squash that had been weighed anywhere, and signs announced the possible entry in Guinness.

“It’s been such a huge hit here during the fair,” which ended Saturday, Thomsen said. “Paul did a phenomenal job, and all of the growers are so supported and excited for him.”

As for what Jarosh will do with several hundred pounds of pumpkin and squash meat, think one word: pies. He plans to process the flesh to satisfy his sweet tooth and to compare the taste from the different varieties. He’ll try to dry the gourd and carve it into a basket.

Jarosh also plans to save the seeds to share with Culpeper neighbors. He wants to challenge them to growing the largest butternut squash they can in limited space.

“I’m hoping to bring the world record back to Virginia next year,” he said, “even if it’s not by me.”

Of course, that will be after he and his wife prepare the fruit for Halloween. They may carve out an eye and monocle, add a top hat and a cane for what might be the world’s first butternut squash dressed as Mr. Peanut.

The Fredericksburg Area Metropolitan Planning Organization is looking into the possibility of adding another bridge crossing the Rappahannock River.

A Ruther Glen man was killed Monday morning in a crash in Caroline County, police said.

This Day in History: The Washington Monument is completed

The Bordeaux region, in crisis, calls for help to pull out vines

The Bordeaux region, in crisis, calls for help to pull out vines

Shocking royal family interviews that changed the course of ‘The Firm’

Shocking royal family interviews that changed the course of ‘The Firm’

Culpeper County resident Paul Jarosh’s butternut squash set a record at the State Fair of Virginia. It was thought to be a world record until a Michigan grower bested him by a pound and a half.

Paul Jarosh demonstrates it's important to lift with the legs when moving a 103-pound butternut squash.

Jarosh protected his pumpkin, shown here, and butternut squash by putting up a tarp to keep the rain off and wrapping them in sheets to avoid sunburn.