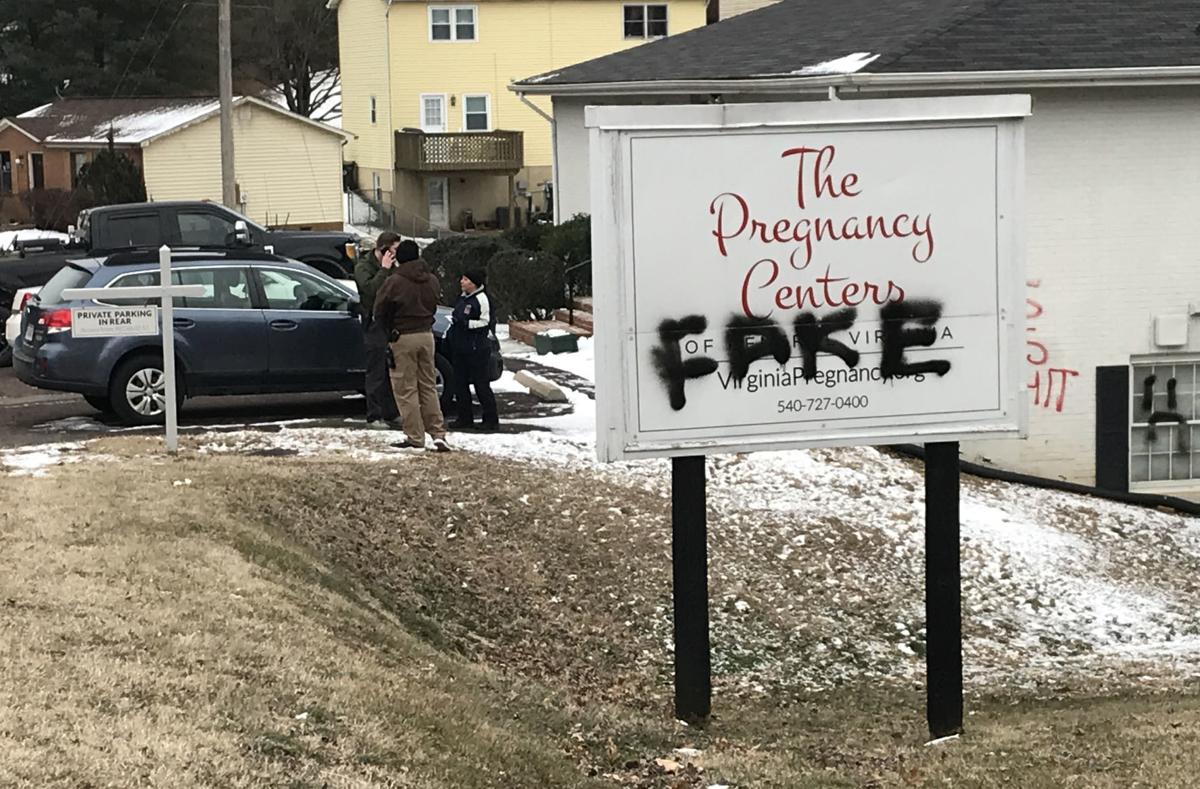 Investigators with the Culpeper Police Department are on the scene of a vandalism at the Culpeper Pregnancy Center on Sunset Lane Friday morning. 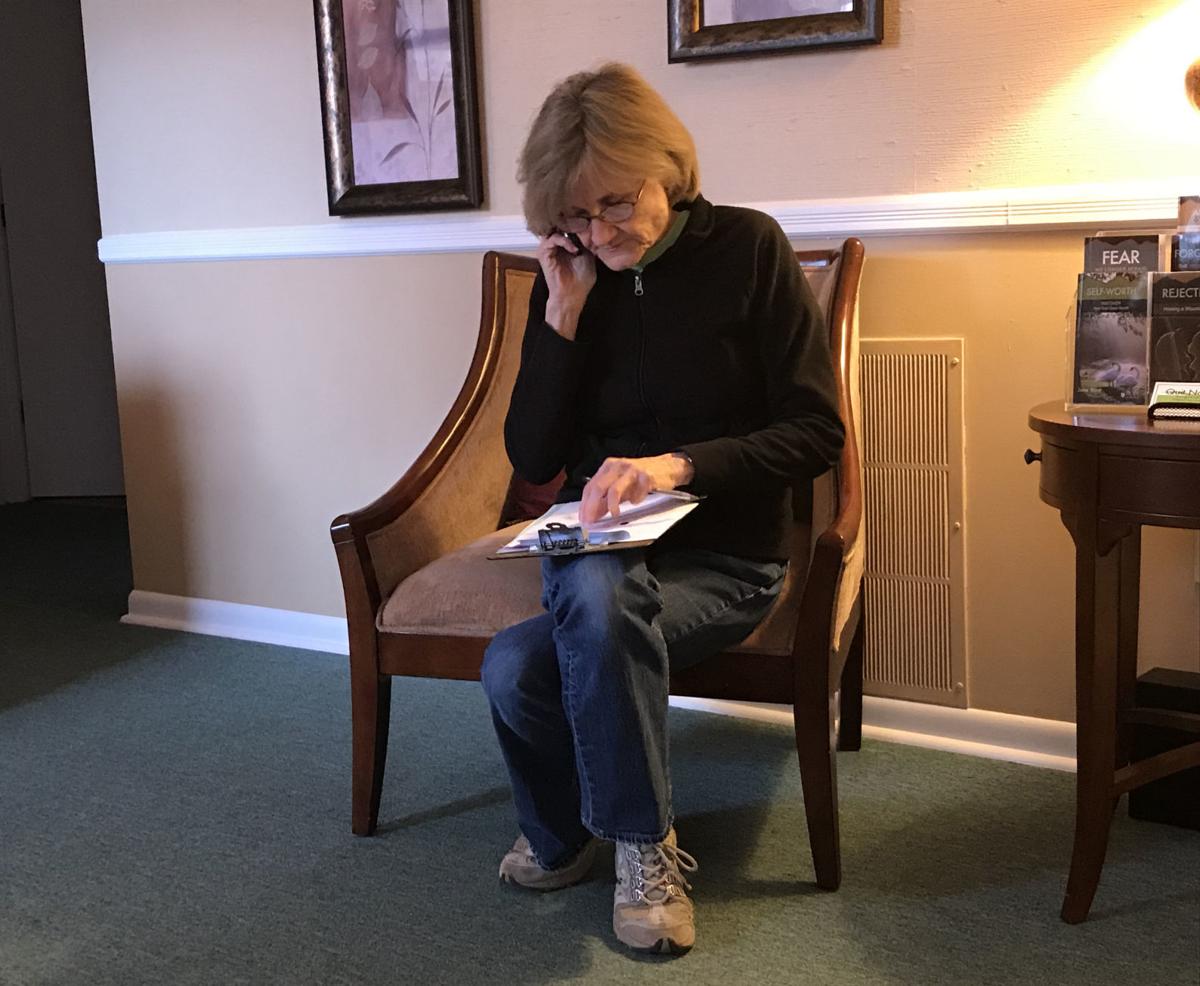 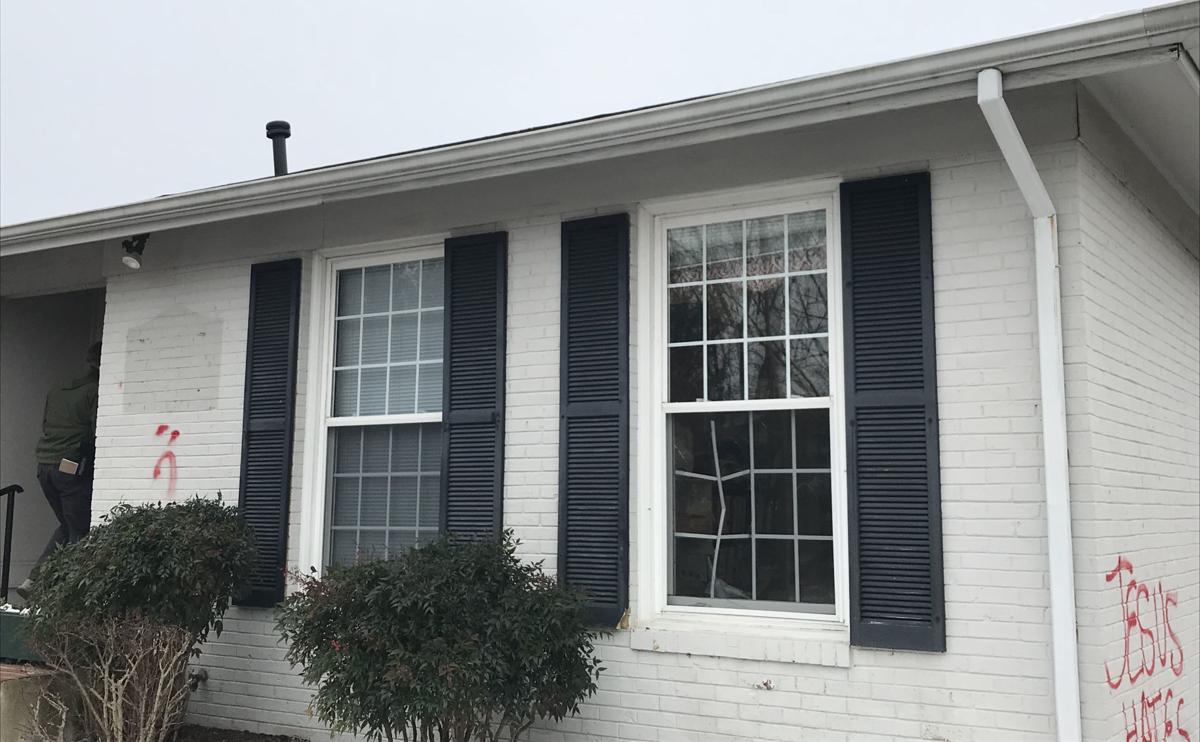 The Pregnancy Center of Culpeper on Sunset Lane was vandalized early Friday including the smashing in of a front window. 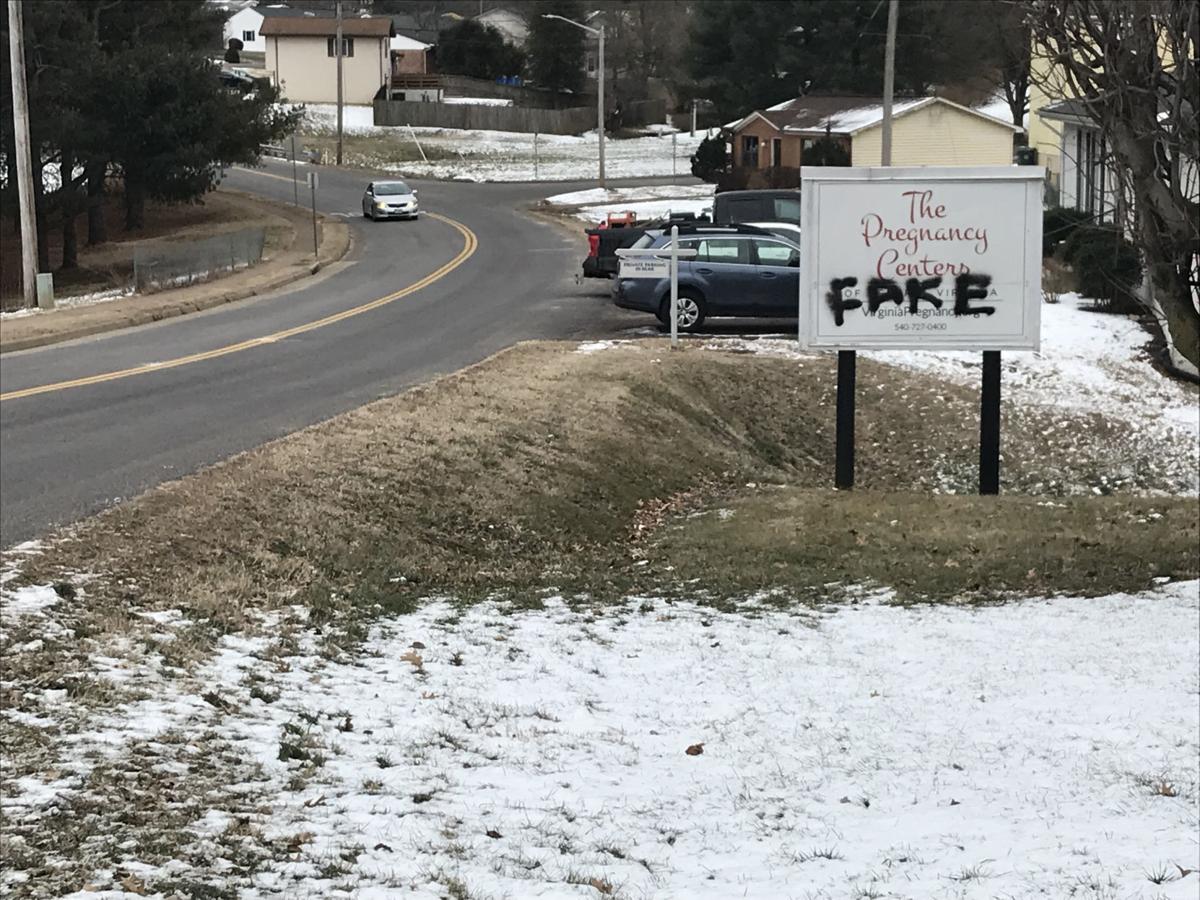 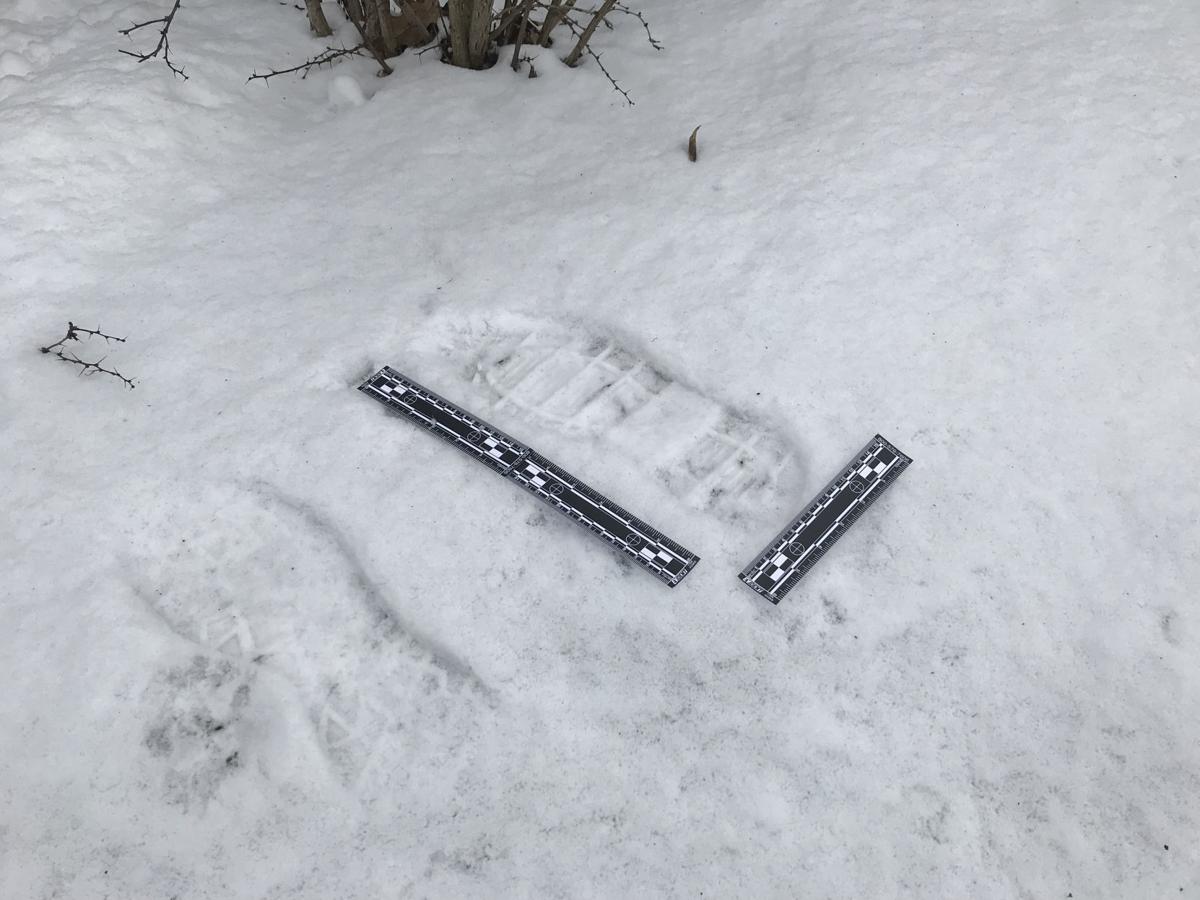 Evidence markers outline a footprint in the snow Friday morning outside the Culpeper Pregnancy Center, which was vandalized overnight.

As the nationwide debate over abortion sparks up again, someone defaced the Pregnancy Center of Culpeper building early Friday with red spray paint spelling out seemingly political and unpleasant messages.

“You hate women” and “Jesus hates this [vulgarity deleted]” along with “FAKE” in big black letters were scrawled on the outside of the small office on Sunset Lane, right next to the Culpeper Hospital and across the street from Farmington Elementary School. A front window was smashed in and one of the center signs covered with red paint and a sad face drawn underneath it.

A trio of investigators from the Culpeper Police Department was on the scene Friday morning measuring footprints in the snow and canvassing the neighborhood to learn more about who did it. Investigator Norma McGuckin confirmed the police department was trying to figure out when the vandalism happened.

Lindy Dimeo, longtime director of the Pregnancy Center, was on site fielding calls and coordinating cleanup Friday morning. The center, which does not perform or refer women for abortions, operates Monday through Thursday.

The vandalism had not taken place when the center closed at 7 p.m. Thursday, Dimeo said. Someone from the hospital witnessed the act and called police around 3:30 a.m. Friday, she said.

“It makes me sad. I’m not angry; it’s just sad because none of it is true,” Dimeo said. “We’re not a fake clinic, we have a doctor on staff; we have sonographer on staff. We do ultrasounds, STD testing, pregnancy testing.

"We’re HIPPA compliant, so we meet all regulations. We are part of a financial accountability organization. All of our services are to help women who are facing pregnancy, unplanned or not with material assistance up to 2 years old and with medically accurate information on all of their options. We are not here to tell them what to do.”

On site for 20 years, the Pregnancy Center of Culpeper consistently gets positive reviews from its clients in anonymous exit surveys, she added. Friday's vandalism was a first for the center, Dimeo said.

“We already had a client come by this morning just to give me a hug. And to say she’s here for us and what she can do to help,” she said.

A political battle over abortion erupted in the Virginia General Assembly this week following the introduction and failure of a bill sponsored by Democrats that would have removed a requirement that three doctors have to certify that a third-trimester abortion is necessary to protect a woman's life or health. Subsequent comments from Gov. Ralph Northam and President Donald Trump stoked the fire and turned it into a national controversy.

Dimeo suspects that the controversy had something to do with the vandalism.

"We have stayed very much out of it," she said of the debate over abortion. "We don’t make public comments on any of that. We’re not here to argue with anyone or tell them what to do. We’re just here to give them a listening ear and accurate information about their options and then they decide.”

The Culpeper Police Department issued a news release late Friday morning asking anyone with information about the vandalism to call Detective Curtis Pittman at 540/829-5508, or to submit anonymous tips to Culpeper Crime Solvers at 540-727-0300 or tips@culpeperva.gov

“We encourage anyone who may have been in the area or noticed anything suspicious last night to reach out to our detectives to assist with bringing the person(s) responsible for this crime to justice,” Culpeper Police Chief Chris Jenkins said in the statement.

Investigators with the Culpeper Police Department are on the scene of a vandalism at the Culpeper Pregnancy Center on Sunset Lane Friday morning.

The Pregnancy Center of Culpeper on Sunset Lane was vandalized early Friday including the smashing in of a front window.

Evidence markers outline a footprint in the snow Friday morning outside the Culpeper Pregnancy Center, which was vandalized overnight.