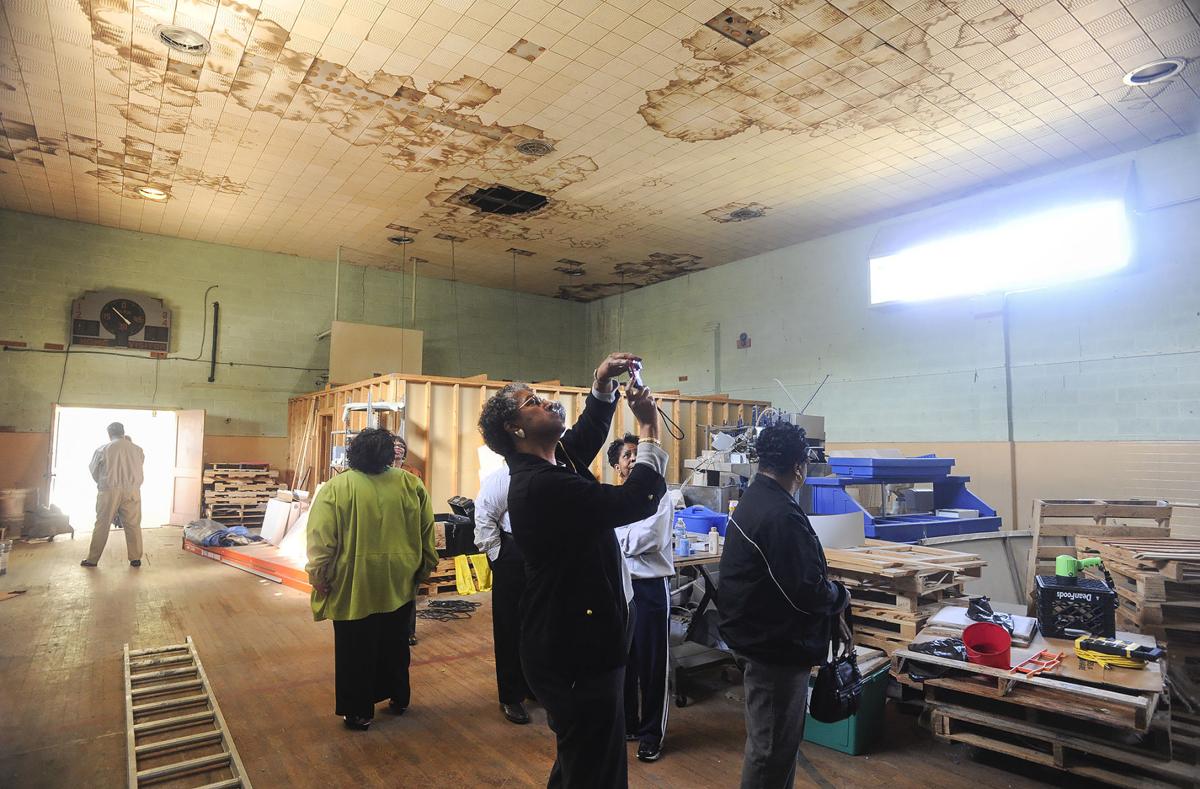 Ralph Bunche Alumni Association members tour the former Black school in 2012. Since then, plans to restore the building have been unsuccessful. 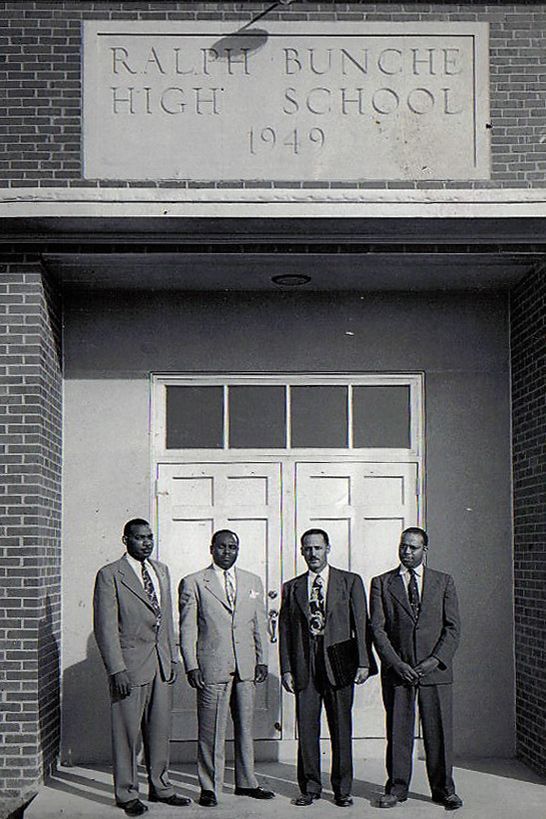 Lawyers from the firm of Hill, Martin & Robinson helped King George families sue the county in order to get Ralph Bunche High School built in 1949.

The Ralph Bunche High School in King George County has two separate storylines—one about its place in history during the national struggle for civil rights and the other about ongoing attempts to restore it.

The first—the story that members of the Ralph Bunche Alumni Association have been lobbying for decades to share—speaks to their struggle and perseverance. When Virginia refused to integrate schools, Black families in King George sued for the county to build a separate-but-equal facility, which brought about the opening of the high school in 1949.

The court action was viewed as a landmark case across the state and nation, said Claudette Jordon, president of the Ralph Bunche Alumni Association. Her group wants King George officials to pursue plans that consultants hired by the county came up with in 2017. The idea includes converting the school into a community center with museum exhibits that would “enlighten visitors about the role it played in the legal history toward equality in education,” she wrote in March.

But the second storyline is still being written—and that’s caused ongoing frustration for alumni members and others who would like to see the building preserved before it’s too late. The school served other purposes after it stopped housing high school students in 1968 and closed to all operations in 1998. The passage of time has not been kind to the aging building, and the cost of repairs and updates would be considerable.

The King George Board of Supervisors has looked unsuccessfully into partnerships in which others would bear the cost of renovation. The search led to a 2019 agreement with a new group, the Ralph Bunche Arts and Humanities Inc.

Initially spearheaded by Marsha Stonehill, a psychiatric nurse practitioner in Dahlgren, the RBAHC proposed a center for the performing arts with a restaurant, event venue and space to tell the history of Ralph Bunche High School. Because Stonehill’s group had no experience with such developments, the alumni association issued a “vote of no confidence” and urged the supervisors to look elsewhere.

The Board of Supervisors acknowledged the Alumni Association’s concerns and included mandatory benchmarks for RBAHC to reach. The first was to raise $2 million by June 2020, and because the group had raised “somewhat less than $10,000” as of February 2021, the agreement between King George and the RBAHC expired, county officials stated in a letter last month to Stonehill.

Stonehill and other group leaders have asked the county to let them continue their mission. She said there was an oversight in the initial document between the two parties, that the wording should have specified an “option agreement.”

“Legally, RBAHC would not be able to do any fundraising for our county-owned property without a legal and binding option agreement,” Stonehill told supervisors, adding that she hoped her group could share documents with the county that demonstrate “the substantial progress we have made behind the scenes.”

She said the RBAHC “is eager to work with you to find a solution as we have an option agreement that would be ready for your review immediately. We have generated hope, support and enthusiasm and we are ready to proceed with the necessary steps you direct us to so we can move forward.”

Two of the three supervisors who voted in 2019 for the RBAHC plan don’t seem willing to extend the arrangement.

“We’ve tried a couple times to have Ralph Bunche developed and restored, and it just hasn’t worked out, and [the building] is just kinda sitting in limbo,” said Supervisor Richard Granger. “Unfortunately, the benchmarks just weren’t met, and so this is the state we’re in. We’re going to have to evaluate what we do ... and find the right way to move forward.”

Fellow Supervisor Jeff Bueche said he looked forward to future discussions about what could be done with the old school.

“It’s a county asset, and it does carry a lot of historical influence and that story needs to be put out there,” Bueche said. “I look forward to getting something done because it seems like we’ve been talking about this forever.”

Annie Cupka, chairwoman of the Board of Supervisors, said anyone interested in developing Ralph Bunche High School can contact Travis Quesenberry, the interim county administrator.

Stonehill, whose husband, Jeff, represents the Dahlgren District on the King George Board of Supervisors, told The Free Lance–Star that her group had raised about $11,500 and had received a $5,000 grant from the Community Foundation of the Rappahannock Region. She said RBAHC leaders had met monthly, completed budget projections for the next five years, developed templates to solicit donations from foundations and are ready to partner with volunteers and supporters who want to see the school revitalized.

Dr. Robert Gayes, who’s also the vice president of the Dahlgren Heritage Museum, joined the RBAHC board in January because he thought the group had “a viable approach and should be given a chance to succeed.” He was aware of the opposition to the plan, but hoped concerns could be addressed if both the RBAHC and Alumni Association worked together.

“I thought I could help with both of these,” he said in a letter to the county.

Michael Hayes, a King George businessman and Rotary member, was recruited to help with the RBAHC’s operations budget. He said he, too, believes a renovated Ralph Bunche could “have such a positive educational, cultural, social impact in our community that I don’t believe currently exists or anywhere close to here.”

But as she’s done in many past meetings, Jordon of the Alumni Association expressed her concerns about waiting even longer to do something with the building. In a letter to the board of Supervisors, Jordon reiterated her group’s vote of no confidence in the RBAHC.

She said the school and the county couldn’t afford to continue on a “rudderless path” and that time is of the essence. The school has been vacant for 23 years—longer than it ever educated high-school students.

“This important point in the county’s, Virginia’s and the nation’s history in the last century should not be forgotten or become a flight of fancy in the way of someone’s idea to convert Ralph Bunche High School into an amphitheater and fine dining restaurant, with or without a side of history,” Jordon wrote.

UP ON THE ROOF

Both groups with interest in the aging Ralph Bunche High School have found common ground on the roof—or at least in their desire to get a National Park Service grant to fix the leaks and help mitigate any hazardous conditions inside the building.

Last fall, King George County applied for money from the Park Service’s African American Civil Rights Grant Fund, hoping to get up to $500,000 for roof repairs. The grant money will be awarded in June and does not require a local match of funds.

The program has $15.5 million available to help projects and properties that “document, interpret, and preserve the sites and stories of the full history of the African American struggle to gain equal rights as citizens and the transatlantic slave trade,” according to the website.

Its goal is to honor those who worked to make the school a reality in 1949. Black families in King George County sued school officials when Virginia resisted integration, and their efforts led to the opening of Ralph Bunch in 1949. Families also had to seek legal action less than two decades later, which resulted in the full integration of King George schools in 1968.

The website has been the result of more than a year of planning, research, content organizing, writing and “tireless dedication from members and friends,” wrote Alumni Association Claudette Jordon. More information is available at rbaa1949.org.

Much of the board’s discussions on the budget focused on school funding, which totals $311.6 million in local, state and federal funds.

Ralph Bunche Alumni Association members tour the former Black school in 2012. Since then, plans to restore the building have been unsuccessful.

Lawyers from the firm of Hill, Martin & Robinson helped King George families sue the county in order to get Ralph Bunche High School built in 1949.