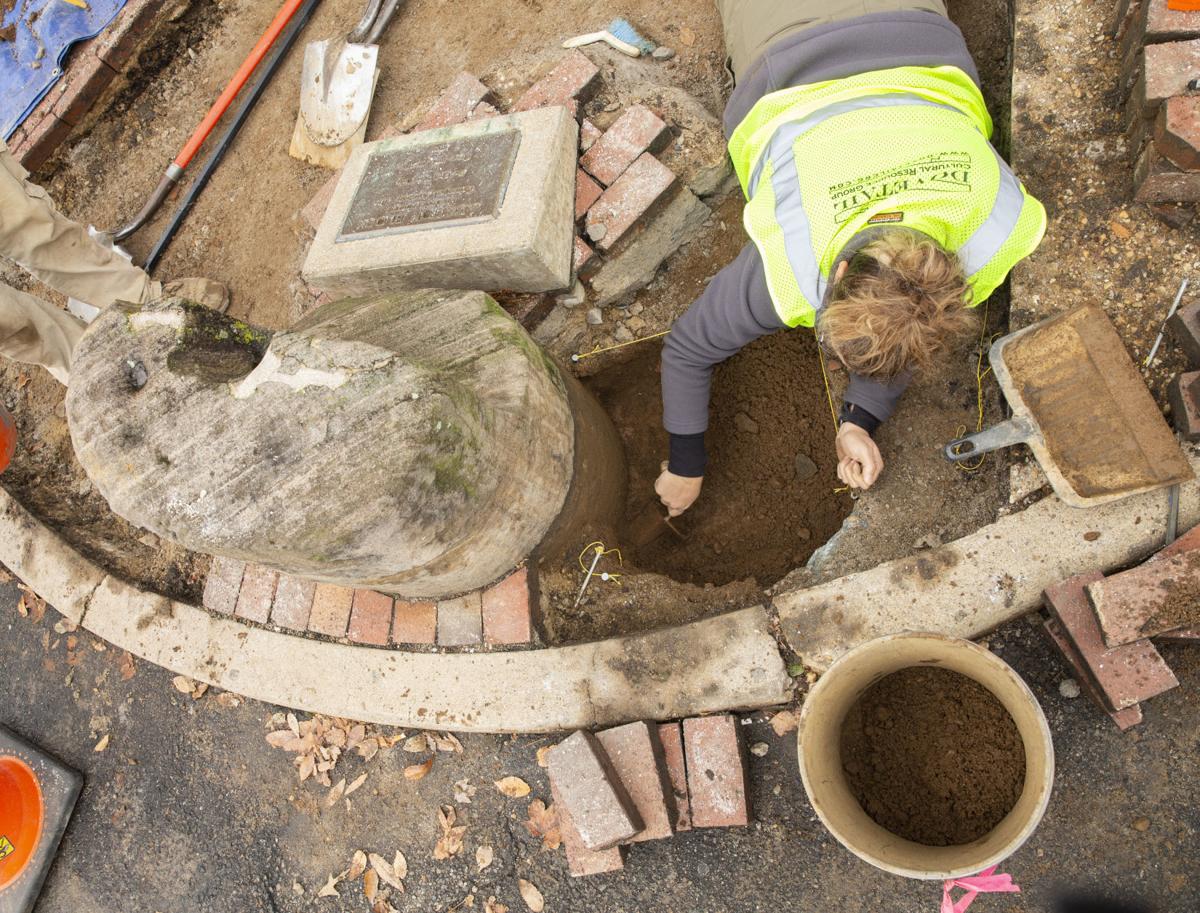 Kerri Barile digs near the slave auction block on William Street in Fredericksburg on Tuesday. 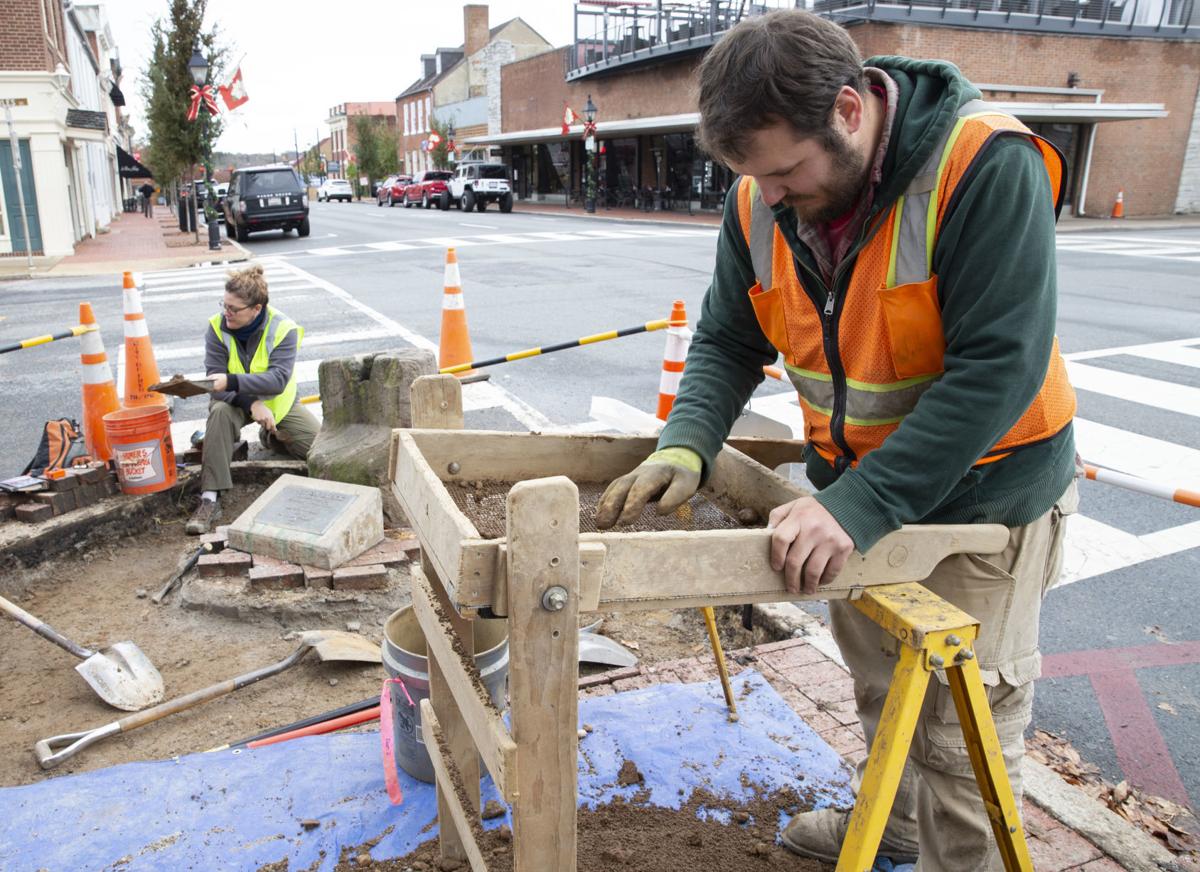 Kerri Barile and Jonas Schnur dig around the slave auction block in Fredericksburg on Tuesday. 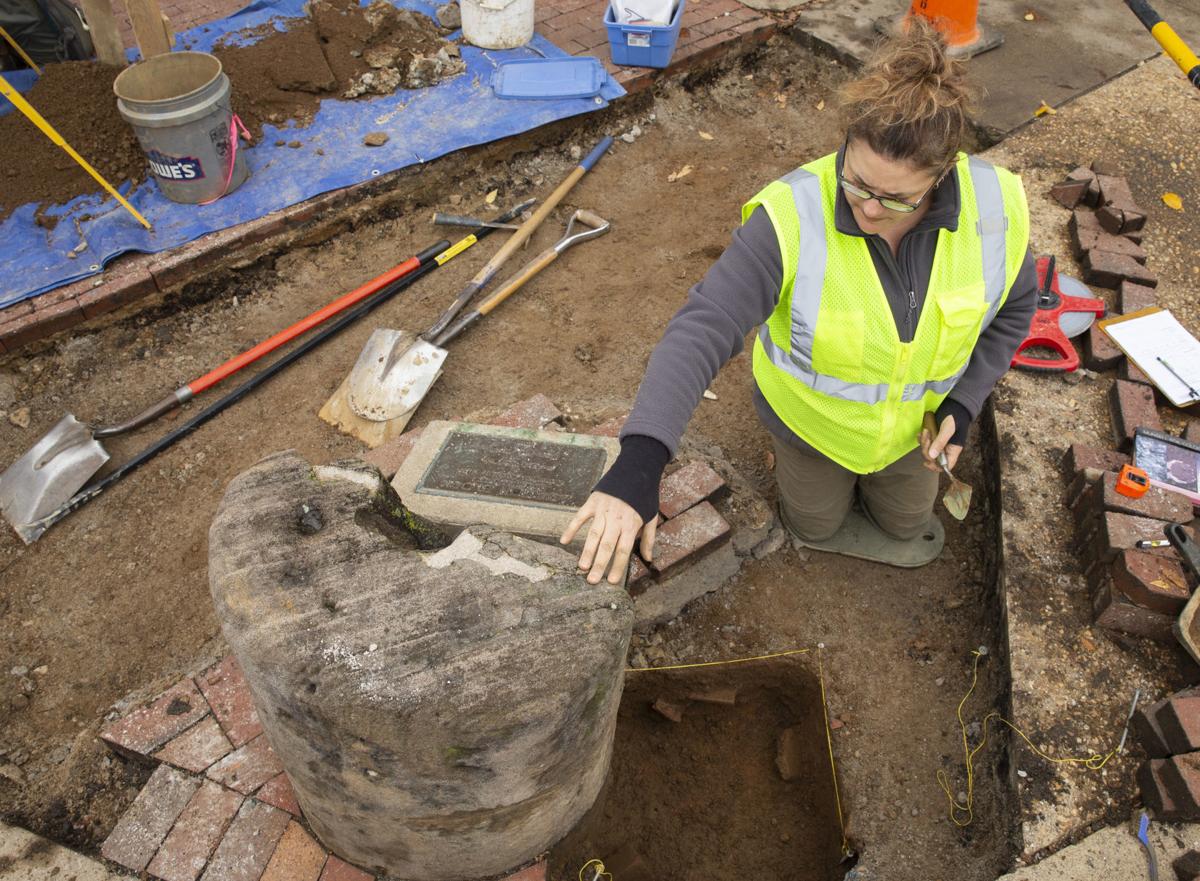 Barile, from Dovetail Cultural Resource Group, says the auction block was probably put in place early in the 19th century. 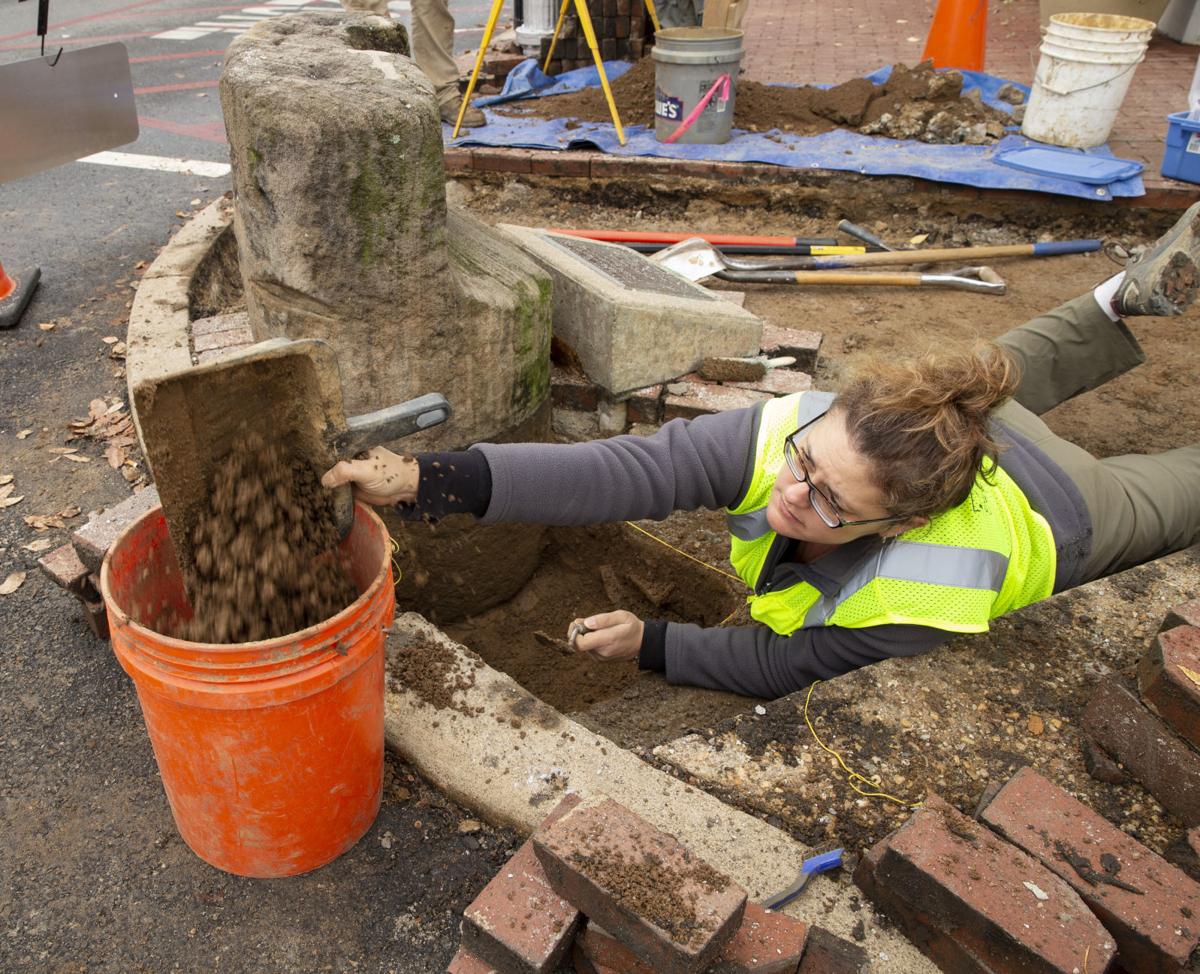 Kerri Barile from Dovetail Cultural Resource Group clears dirt from around the auction block in Fredericksburg, Virginia on Nov. 13, 2018. 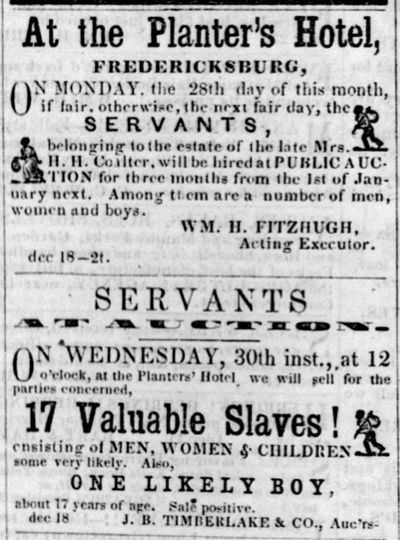 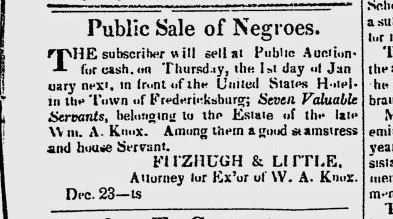 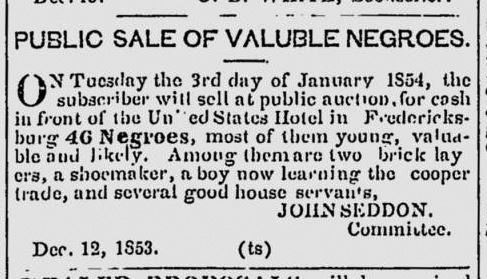 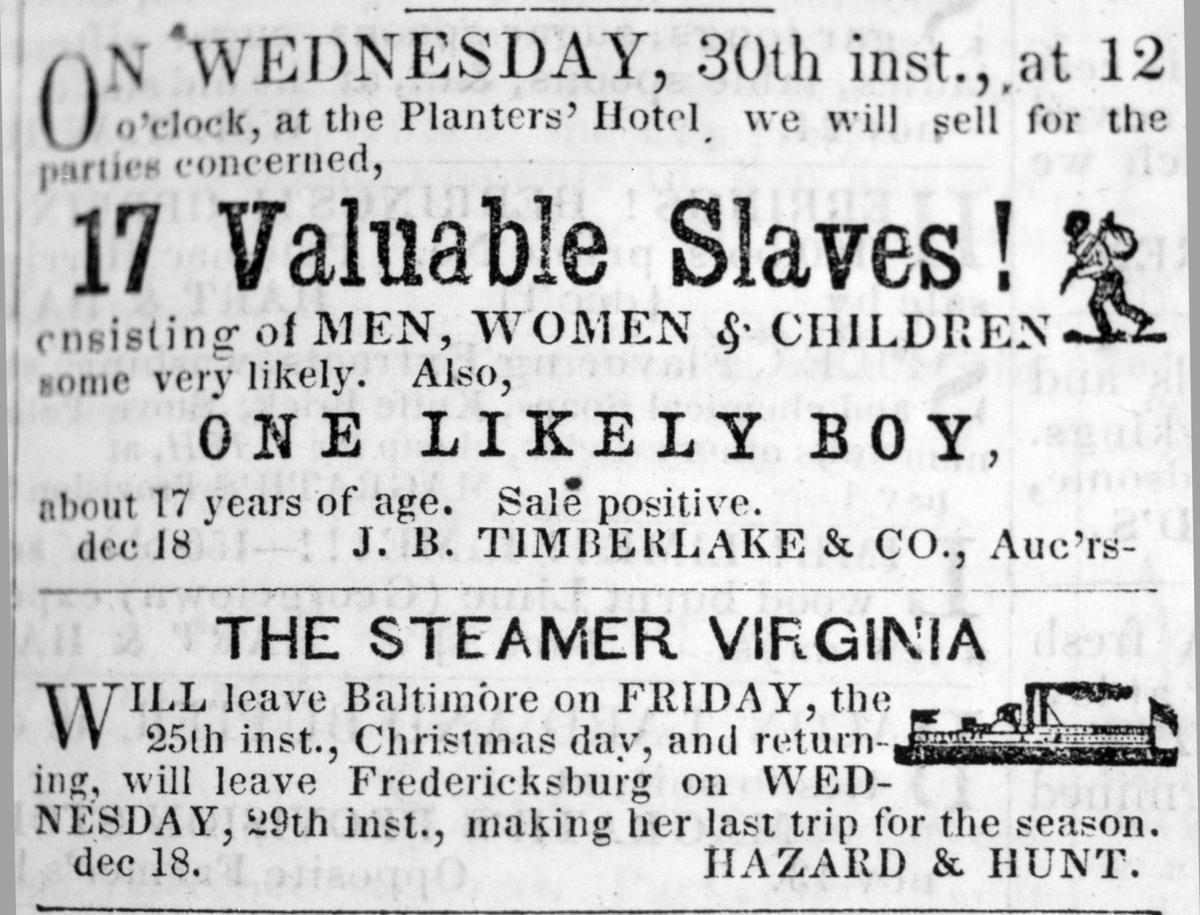 Local archaeologists have gotten to the bottom of a mystery surrounding Fredericksburg’s controversial slave auction block.

The weathered piece of Aquia stone originally appeared a foot taller, but successive layers of pavement and fill added as part of William Street was leveled over the years have made it look shorter, said Kerri Barile, president of Dovetail Cultural Resource Group, during a dig at the site Tuesday.

Barile and Jonas Schnur, her crew chief, spent the morning digging down to the block’s base after city employees removed the surrounding brick sidewalk at the corner of William and Charles streets. Dovetail was hired to check how far down the stone goes before the city extends the sidewalks at that intersection next year to create a traffic calming bump-out.

They discovered that the 3.4-foot tall stone sits on a brick platform, and had about 6 inches of dirt mounded around it to keep it in place. That layer of dirt may have been covered with the thin brick pavers they found at that level.

Barile speculated that the auction block was probably put in place early in the 19th century based on the quality of the stone. It appears to have come from a vein mined after cleaner and smoother Aquia stone, the type used in such edifices as the White House and U.S. Capitol, was depleted. What was left contains inclusions, or other minerals, and is harder to work with.

“There’s a very different quality in the stone,” she said. “We’ve noticed it all throughout Fredericksburg in our work in existing buildings and sites.”

Barile and Schnur are doing additional research on the stone, including how it was used. It’s possible that it was intended as a sign post, since the small square hole drilled in its top could have supported a rod or post that an auctioneer would have used to indicate a sale.

She and Schnur spent Tuesday afternoon making drawings and taking notes before refilling the dig site. People who stopped to see what they were doing typically had two responses. They either seemed hopeful that it was about to be removed—or concerned that might be the case, she said.

The auction block has stirred those kinds of emotions repeatedly over the years, including in 2017 when a candlelit prayer vigil was held at the auction block. It included a prayer by the Rev. Hashmel Turner asking God to “heal our land” and to lead city officials to remove the auction block. The former councilman called it an “obstacle that brings remembrance of so much heartache, so much suffering and so much pain.”

Three people then asked the City Council to consider removing the stone during the public comment portion of a council meeting. That led to a survey on the topic and a public meeting on the issue. Based on what they heard, council members voted 6–1 to leave the auction block in place.

They also hired the International Coalition of Sites of Conscience in March to work with the Fredericksburg community to reach a consensus on how to tell a more complete history of the auction block and the city itself.

So far, ICSC staff have held more than 10 focus group and public meetings to gain an understanding of what “story” Fredericksburg has told in the past, is telling now and wishes to tell in the future about the auction block and throughout the city. They’ve also been tasked with developing ideas for how to protect and interpret the block, and to create a prioritized list of recommendations for improving and enhancing the history of African–Americans in Fredericksburg.

ICSC has completed a report on the first phase of its findings, which is available at the city’s website, fredericksburgva.gov, and will have its findings from the second phase ready soon. The third phase began in October and will conclude with a final round of community conversations at 6:30 p.m. Dec. 12 and 13 on the third floor of the Central Rappahannock Regional Library branch at 1201 Caroline St.

A diverse group of about 16 people attended the last community session, which was held Wednesday at the library. ISCS staffers Dina Bailey and Braden Paynter led participants through a series of exercises designed to get them thinking about how they feel most connected to the past in Fredericksburg and their visions for its future.

At one point during the two-hour session people were asked to stand next to a paper taped to the wall that contained one of the four quotes about the past that most resonated. About half of the group quickly gravitated to the one by the late Marcus Garvey, who’d been president-general of the Universal Negro Improvement Association and African Communities League. It said, “A people without the knowledge of their past history, origin and culture is like a tree without roots.”

Markers were handed out and people were asked to pick one person in their group to add their thoughts about how their quote connects to the slave auction block. It didn’t take long for such comments as “The need to tell the entire history,” “A ‘people’ includes everyone” and “Must know the importance of slave auction block no matter what your view,” were written at the bottom of Garvey’s quote.

There was also a brief discussion among those standing next to it about whether others in the group would even know who Garvey was. Blues artist and civil rights activist Gaye Adegbalola was quick to add, “Marcus Garvey is my hero, and we need more heroes’ stories to be told.”

Bailey then asked each group to move counterclockwise to the next quote, and talk about how it didn’t connect with them in terms of the auction block. For the group who’d been standing next to Garvey’s quote, it was one by Winston Churchill in which he proclaimed, “History will be kind to me for I will write it.”

“I can answer that,” said Adegbalola, adding that the City Council will have the final word on the auction block. “They’ll decide how it’s written,” she said. “The history books are already being written by old white people.”

“I see the quote as a call to action,” she said. “I don’t see it as a rewriting or revision, but writing our history now. I see that as an action quote on our behalf.”

The Rev. Hashmel Turner agreed, saying that he saw Churchill’s quote as a challenge.

“I took it personally,” he said. “Yes, I’m willing to tell the story.”

Bailey and Paynter urged everyone to return for the final sessions and encouraged others to attend as well. They also asked the group to think of one thing they can do before then “to help build a better Fredericksburg for seven generations.”

“Sometimes,” Bailey said, “it’s just about touching one other heart.”

Kerri Barile digs near the slave auction block on William Street in Fredericksburg on Tuesday.

Kerri Barile and Jonas Schnur dig around the slave auction block in Fredericksburg on Tuesday.

Barile, from Dovetail Cultural Resource Group, says the auction block was probably put in place early in the 19th century.

Kerri Barile from Dovetail Cultural Resource Group clears dirt from around the auction block in Fredericksburg, Virginia on Nov. 13, 2018.