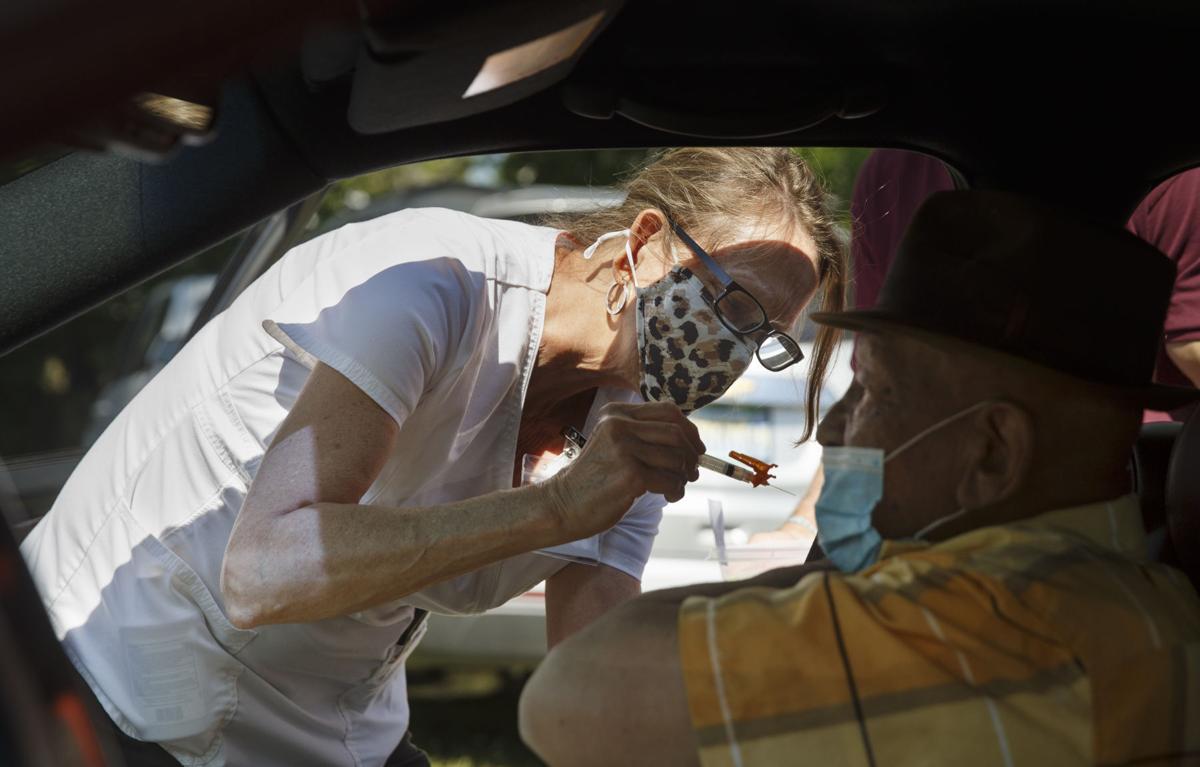 Patti Gluchowski administers a shot to Henry Brown during the Guadalupe Free Clinic’s vaccine clinic at Colonial Beach’s community center on May 15. The clinic operates every Wednesday and Saturday. 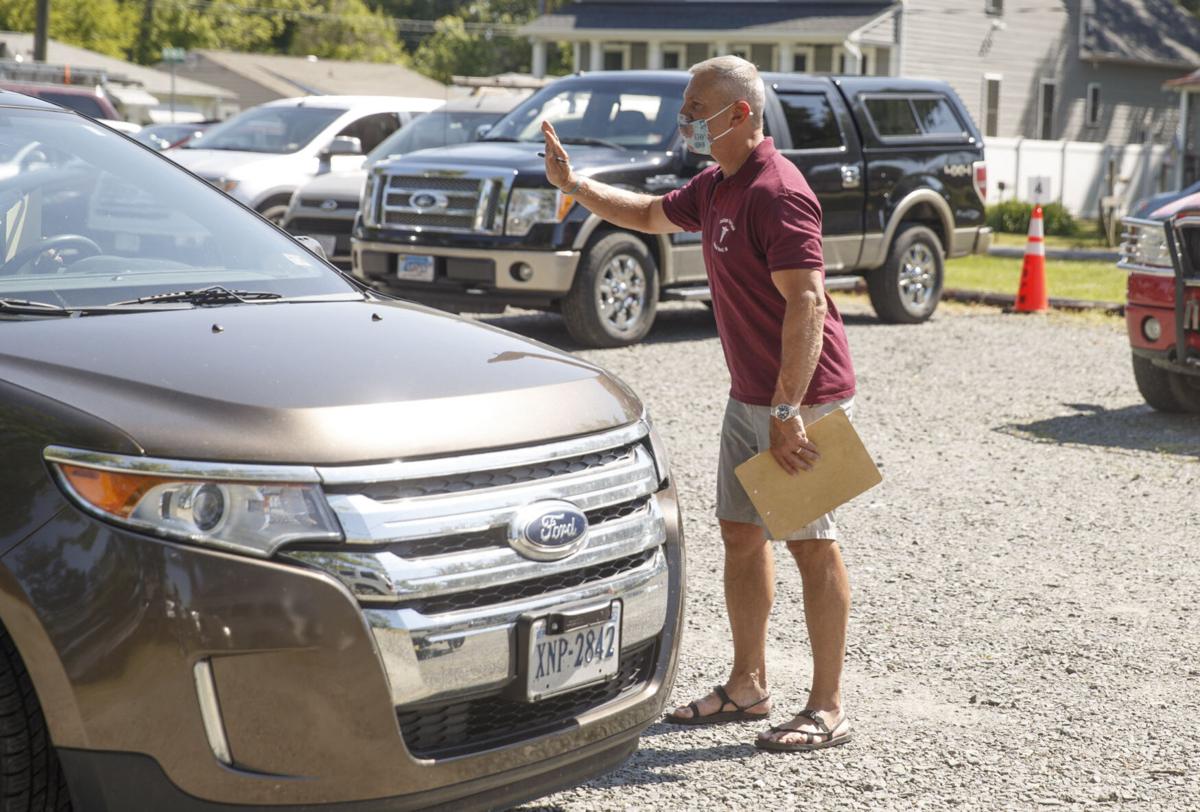 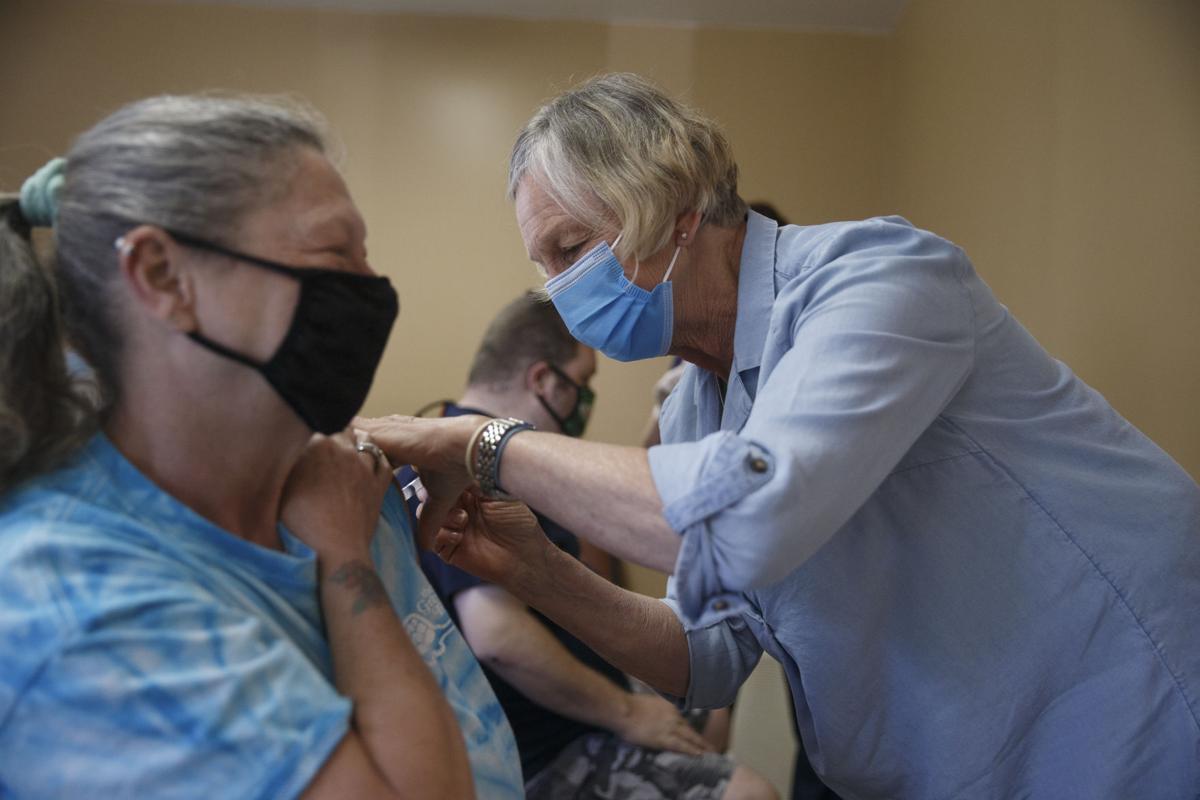 Barbara Fulscado, a volunteer at the clinic, gives a dose of the Moderna coronavirus vaccine to Jean Weeks. 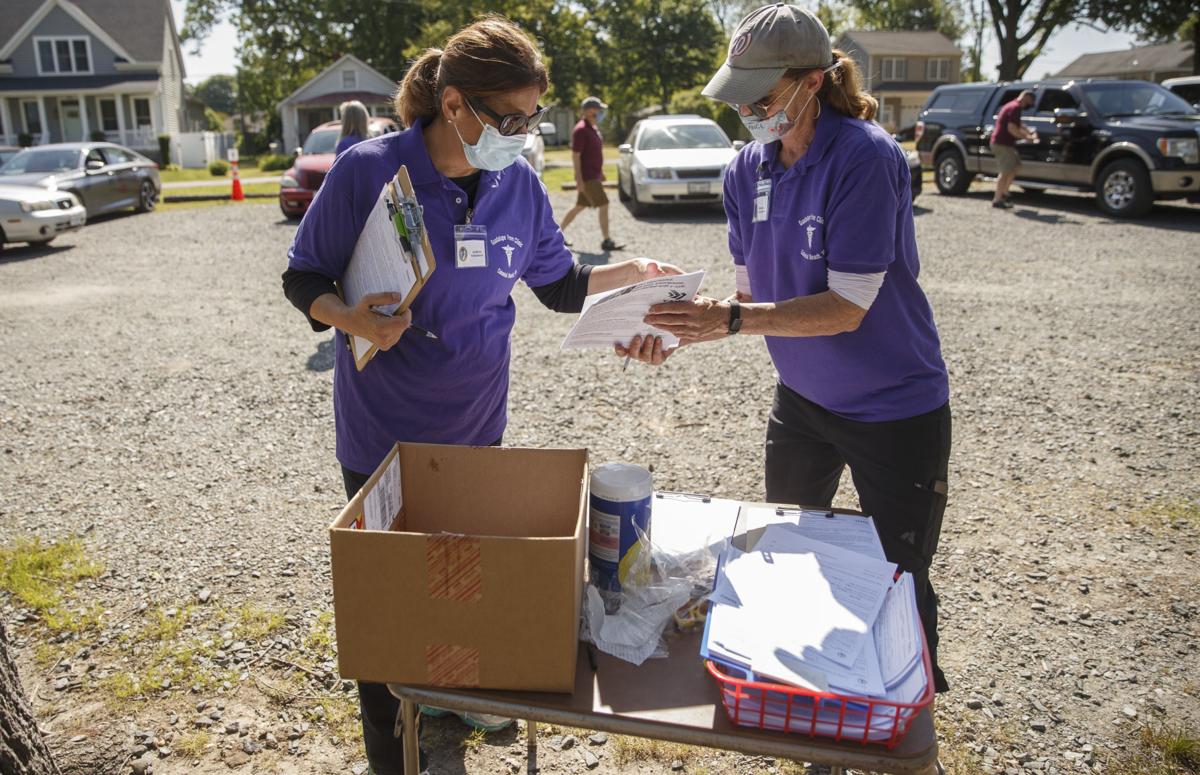 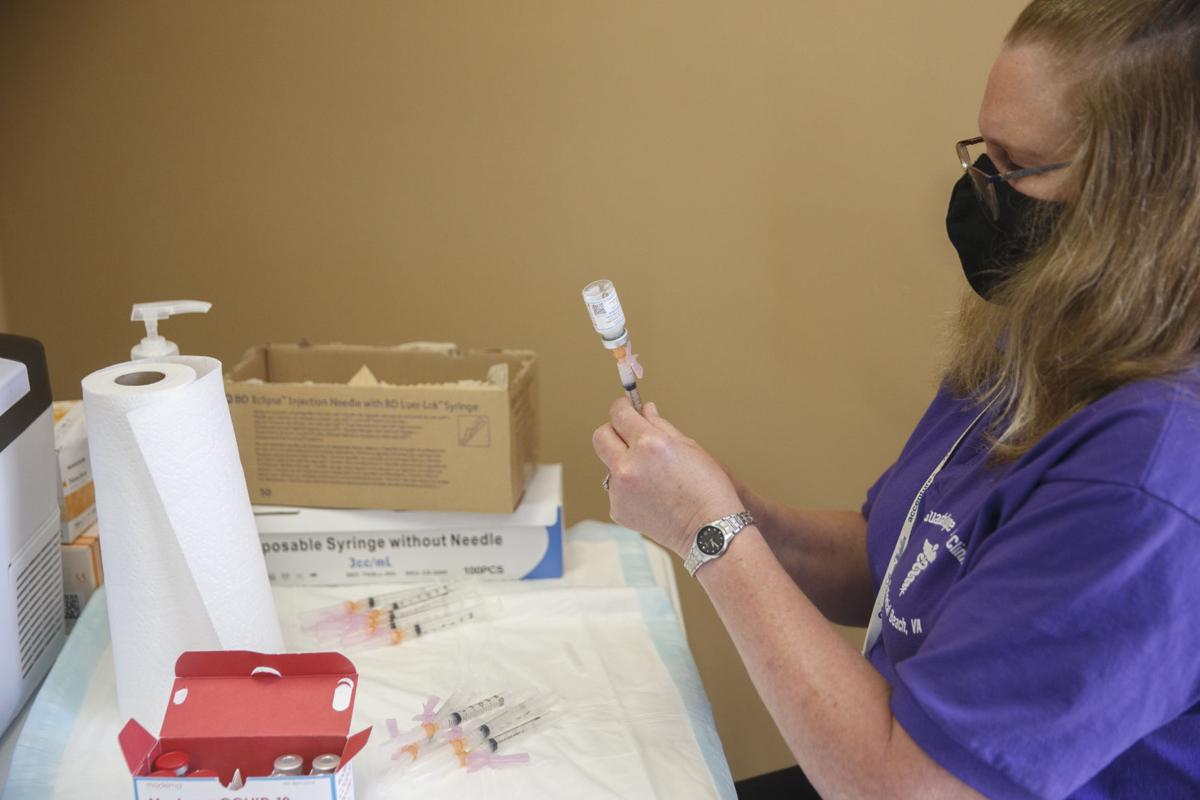 Volunteer Linda Bradley fills vaccine syringes at the clinic, which has gotten support from the town. 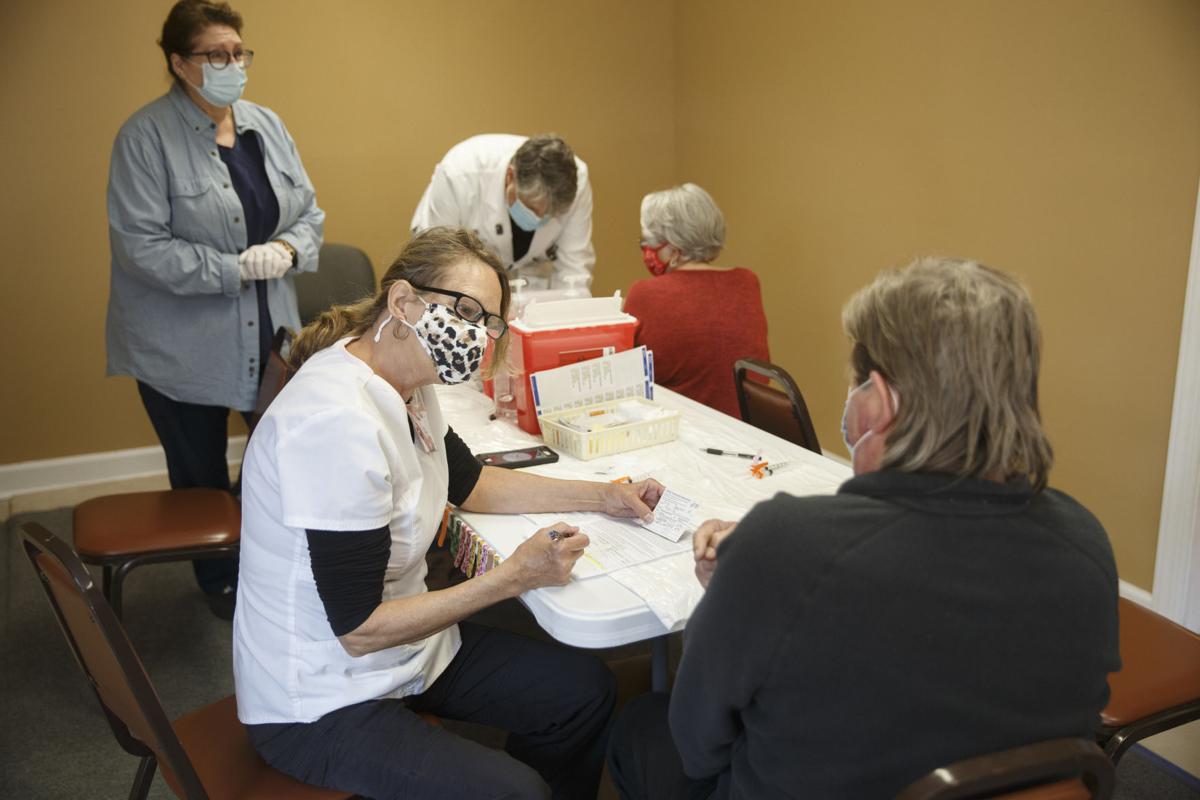 Volunteers for the Guadalupe Free Clinic staff a COVID-19 vaccine site at the community center in Colonial Beach, Va. on Saturday, May 15, 2021.

Every Wednesday and Saturday, people from various walks of life help give COVID-19 vaccines at the Colonial Beach Community Center—then get a dose of kindness for their efforts.

Since the center began offering vaccines in March as an offshoot of the Guadalupe Free Clinic of Colonial Beach, businesses and residents have given the project a shot in the arm through contributions of food, money and even gravel for the driveway that leads off the property.

“What incredible people in Colonial Beach,” said Barbara Fulscado, a volunteer who jokes that a person “can get fat working at the clinic.”

Then on a serious note, she said the pandemic hasn’t always brought out the best in people. The evening news is proof of that.

What’s happening at Colonial Beach is an exception, she said. “You can grumble all you want, but I have seen more good come out of this.”

Aside from Lance Carrington, the Guadalupe Free Clinic director who earns a part-time salary for what’s more like a full-time job, those who work at the clinic do so because they want to be there, not to earn a paycheck.

“Everything about this is volunteer,” said Mike Cabrey, the town’s vice mayor. “They’ve all decided they want to be part of the solution.”

During normal times, the Guadalupe Free Clinic provides medical care for residents of Westmoreland County who don’t have insurance. The facility operates on the grounds of St. Elizabeth of Hungary Catholic Church and is funded by donations, including support from Mary Washington Healthcare.

When COVID-19 vaccines became available in December, free clinics throughout the state were asked if they wanted to be part of the distribution, and Carrington filled out the necessary paperwork. The facility started giving out vaccines on Jan. 20, but “it quickly became too big an operation for our little clinic,” he said.

He checked with Mayor Robin Schick and the Town Council agreed to let the clinic set up shop in the Community Center on Marshall Avenue. Some of the volunteers who help with vaccines also support the clinic, but many others are there solely to help stamp out the spread of the virus. Likewise, some have been trained through the Virginia Department of Health as Medical Reserve Corps, but they’re functioning as Guadalupe Free Clinic volunteers on Wednesdays and Saturdays.

Cabrey has become the “de facto coordinator” of the outside operation—making sure drivers have the needed forms, park in allotted spaces, enter the small building for their shots, then return to their vehicles and get in a separate line for observation.

He runs it like a military operation and, though retired, he has the haircut, physique and movements of a man who spent 30 years in the Army. On a typical Saturday morning, he jogs from one vehicle to the next, greeting those inside and directing them to the right area.

Inside, Caryn Self-Sullivan, a Colonial Beach Town Council member who’s studied manatees in Central America, checks people’s temperatures and ushers them to the proper stations. When she realized Carrington didn’t have all the supplies needed for the clinic, she started a Facebook campaign that raised $6,000. Other residents saw it and would hand Carrington a check after they got their shots.

The money went toward the purchase of gloves and syringes, masks and copies of all the two-sided forms, in English and Spanish, needed for those getting vaccinated.

Fuscaldo, a King George County nurse who worked with lepers when her husband, Bob, was stationed in Vietnam during the war, puts those she’s vaccinating at ease with laughter. When Jean Weeks saw she was about to get a “kiddie Band-Aid” to cover her injection site, Fuscaldo said: “You get a super girl, Wonder Woman.”

At the same table in the back of the building, Dr. Jeff Rothstein, a neurologist from Johns Hopkins University, also asks residents about their health and any allergies they may have. He lives in Baltimore, has a weekend home at Colonial Beach and figures while he’s there, he might as well help with the vaccination effort, just as he did in Baltimore with fellow hospital workers.

He spends his workdays with patients suffering from Lou Gehrig’s disease, so being able to dole out a dose of preventive medicine “is a nice balance,” said the physician, who wears his white coat from Johns Hopkins and answers to “Dr. Jeff.”

The volunteers at the vaccination clinic—about 10 outside and eight inside—have helped to give out almost 3,000 doses of COVID-19 vaccine. They started with Colonial Beach first responders, government officials and teachers, then continued down the list of essential workers, always prioritizing the senior set.

That’s obvious during the clinic. Those who can’t walk into the building have the shots brought to them. Henry Brown sat in the passenger side of a car during a recent clinic as a nurse asked questions and Cabrey provided moral support. “You won’t feel a thing,” he said.

Brown seemed unfazed by the shot. As his son, Albert, maneuvered the car into the observation line, Henry Brown said it’s pretty nice that clinic volunteers did this for him. He’s not too steady on his feet these days, being weeks from his 93rd birthday.

Some Colonial Beach residents drive their golf carts to the clinic, as Gary Starkey did on a recent Saturday with his son, Chris, who was getting his second shot. But not everyone who comes to the facility lives in the town.

Troy Robinson works in one of the restaurants on the weekends, lives in King George and spends his weekdays working in Richmond. The Colonial Beach clinic was the most convenient for him.

Carrington also has taken a team of nurses to independent living facilities and homebound residents in the region. As vaccines have become more available—and interest has waned—he makes a point of not turning away anyone, even those who got their first dose somewhere else. As long as they got the Moderna vaccine the first time, he says the Colonial Beach clinic can accommodate them.

When the vaccine was more limited in the early stages of the rollout, the clinic received lists of names of those who had pre-registered with the Three Rivers Health District. Dr. Rich Williams, district director, started calling the Colonial Beach clinic the “northern outpost” because the nine other localities in the district lie to its south.

There’s been a lot of collaboration among health-care systems, medical offices and health departments in the sprawling and rural district, and “the Guadalupe Free Clinic, in particular, has been one of the more highly willing partners to reach across any lines they needed to,” Williams said. “It’s been a spectacular collaborative effort.”

And certainly a needed one, especially in areas like Colonial Beach, which the mayor noted is 45 minutes from the nearest hospital.

“It’s a benefit to everybody that there can be any kind of medical service in Colonial Beach,” she said.

Donna and Randall Sisk, who live in nearby Oak Grove, recently got their second doses of the vaccine at Colonial Beach. She said it’s wonderful the way people have come together to help each other.

“It’s typical of Colonial Beach,” Donna Sisk said. “They have a lot of good people here.”

Patti Gluchowski administers a shot to Henry Brown during the Guadalupe Free Clinic’s vaccine clinic at Colonial Beach’s community center on May 15. The clinic operates every Wednesday and Saturday.

Barbara Fulscado, a volunteer at the clinic, gives a dose of the Moderna coronavirus vaccine to Jean Weeks.

Volunteer Linda Bradley fills vaccine syringes at the clinic, which has gotten support from the town.

Volunteers for the Guadalupe Free Clinic staff a COVID-19 vaccine site at the community center in Colonial Beach, Va. on Saturday, May 15, 2021.