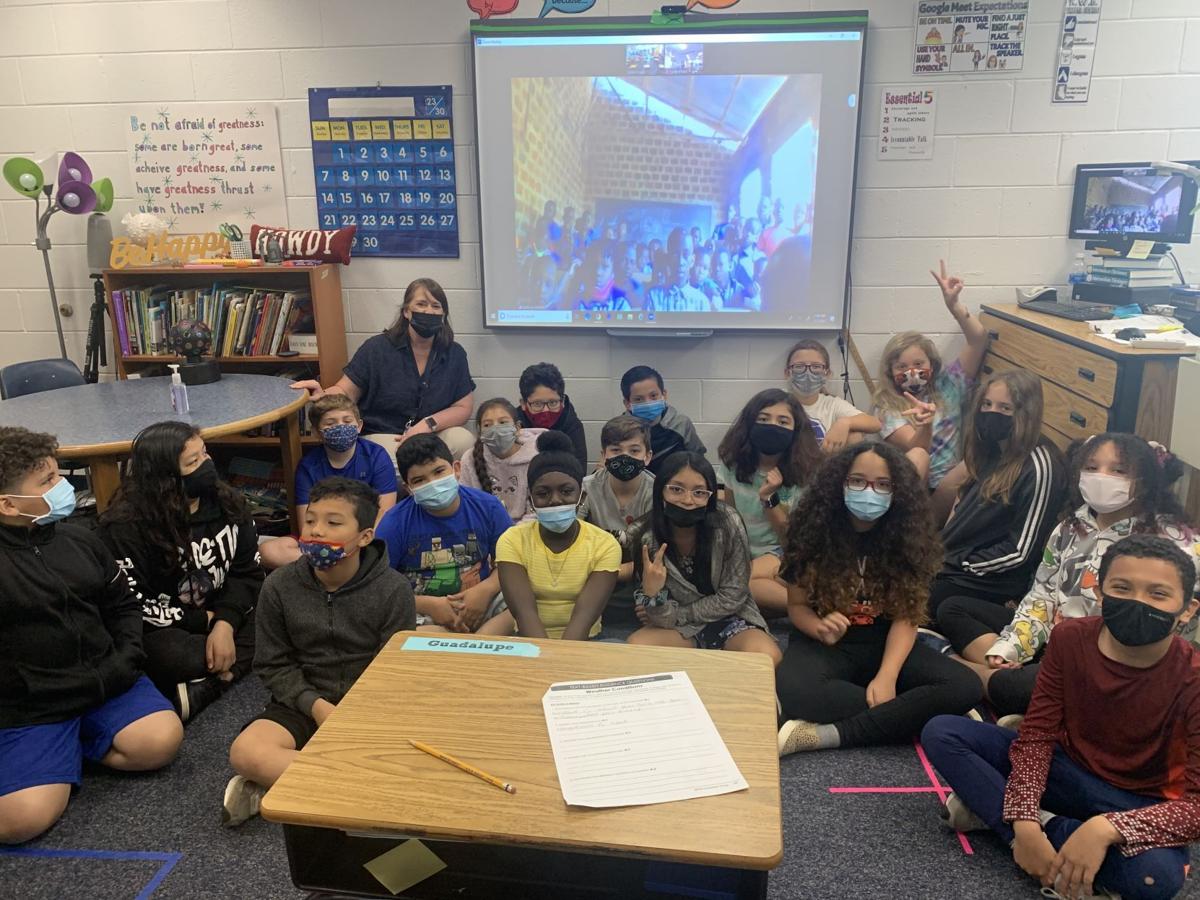 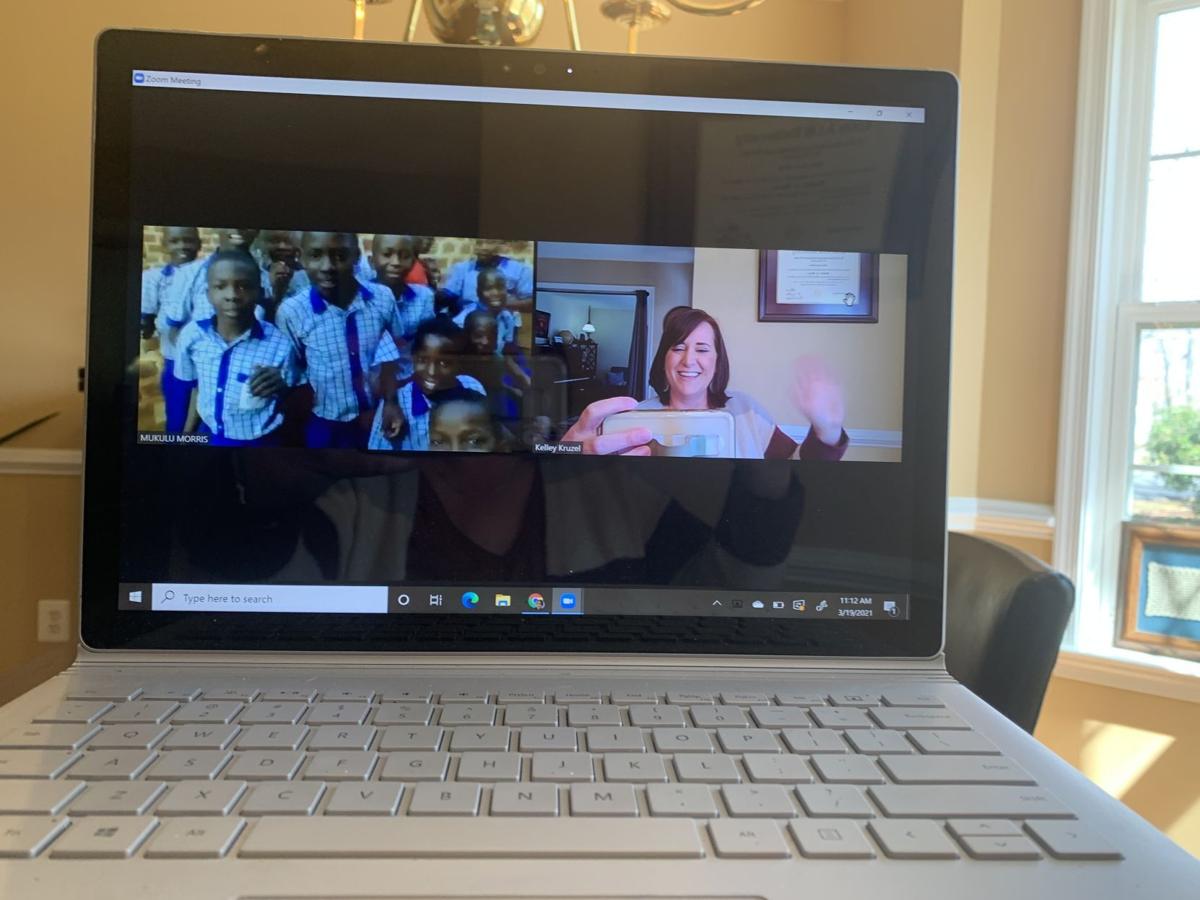 One of things students at Green Valley, a primary school in central Uganda, wanted to know about Kelley Kruzel’s fifth grade class at Kate Waller Barrett in Stafford County was, “Do you have any traditional dances?”

“We had just danced the Macarena and the Cha Cha Slide at the school talent show, so we talked about those and sent them a video,” Kruzel said with a laugh.

The Green Valley students wanted to share one of their traditional dances, a kiganda dance they would use to welcome visitors to their village. They stayed after school for three hours—until 9 p.m.—rehearsing and performing the dance with drums and other traditional instruments.

“It was just beautiful,” Kruzel said. “When my kids saw the video, one boy said, ‘If I had known what they were going to do, I would have worked harder at the Macarena.’ ”

Kruzel’s class meets for once-a-week video chats with Tugavune Ronnie Wilson’s fifth grade class at Green Valley Child Care Primary School in Uganda since March and Kruzel said the experience has “opened up my kids’ eyes for sure.”

“They have learned not to feel sorry for others, but to have empathy,” she said.

Empatico, a free web tool that matches classrooms around the world, connected the two teachers.

Kruzel said she registered at the site, but had forgotten about it until Wilson reached out to her.

For the first meet, each teacher prepared the students with questions for the other class, but the Ugandan students were too nervous to talk on camera.

Green Valley—a private Christian school that Wilson started with his brother to meet the need for education in the area—has only one computer.

The first meeting with Kruzel’s class was the first time many of the students had seen the computer used, let alone been invited to talk into it, Kruzel said.

“So they mostly just stared at us while the teacher answered our questions,” she said. “There was one brave soul, Calvin, who wants to be a lawyer when he grows up, and he spoke a little, but my class chants a lot and they were chanting ‘You’ve got this’ and I think that freaked him out.”

Kruzel’s students wanted to know if the Ugandan students saw animals on their way to school, what the climate is like, what subjects they study and what they ate for lunch.

They learned that the Ugandan students see farm animals on their way to school, just like many Stafford County students, and that they study many of the same subjects.

Other aspects of the school day at Green Valley are very different. The students walk to get water and their classroom has a dirt floor and no air conditioning.

Wilson shared a video with Kruzel’s class of the daily lunch—a grain porridge topped with beans that he serves out of large cast iron pots.

For the next meet, which was two hours long, Kruzel talked with each of the Ugandan students one-on-one and answered their questions.

“They had just had their presidential election—they have had the same president for 40 years—so they wanted to know about our president,” Kruzel said. “They wanted to know if our trees lose leaves in the wintertime, so I took the computer outside to show them the trees.”

As the Green Valley students warmed up to talking to the computer, the weekly meets became more lively. The two classes played a game of That’s Me, standing if the teacher read something they could answer “Yes” to—such as “Do you have siblings?” or “Do you like art?”

Kruzel’s class learned that the Ugandan students were preparing for their final exams, so they put together a care package filled with pencils and other small gifts and handwritten letters of encouragement.

The Ugandan connection spilled out of Kruzel’s classroom to the rest of Kate Waller Barrett. During the student-run Penny Wars fundraiser, the school raised $600 for Green Valley, money that will be spent on repairs and to expand the school so that it can bring back more students during the COVID-19 pandemic.

Kruzel also learned that seven of Wilson’s students live at the school because they have nowhere else to go.

“So we’ll start working on a way to find support for those kids,” she said.

Kruzel said her class was already “a kind class,” but that she has observed them thinking outside themselves more since they started talking to Wilson’s students.

“One student came in one day and asked if we could do a neighborhood cleanup,” she said. “I’m not sure she would have thought of that were it not for the Ugandan class.”

Kruzel said her class has discussed the difference between feeling sorry for the Ugandan students and having empathy for them.

“They may have no computer and a dirt floor, but that’s what they have and they are making the best of it,” she said. “We can acknowledge that we have more and be grateful for what we’ve been given.”

The school year is winding down for both classes, but Kruzel said she plans to keep up the connection with Green Valley school in coming years.

“We just fell in love with this class,” she said. “They have my heart at this point.”

'Concerning' asteroid will break into Earth's orbit in a week: NASA

'Concerning' asteroid will break into Earth's orbit in a week: NASA

Eight students have been charged as a result of the fight that broke out Tuesday at James Monroe High School in Fredericksburg, the city Polic…

New Stafford schools superintendent is ready to get started

Getting through the pandemic, effectively managing growth and supporting teachers are among the goals new Stafford County Public Schools Super…

The Stafford County School Board hired Thomas Taylor, a former regional superintendent of the year in Virginia, as the next division superinte…

September Students of the Month

These students have been recognized by their respective schools.

As families entered the cafeteria at Cedar Forest Elementary School in Spotsylvania on Thursday evening, children tugged on their parents hand…