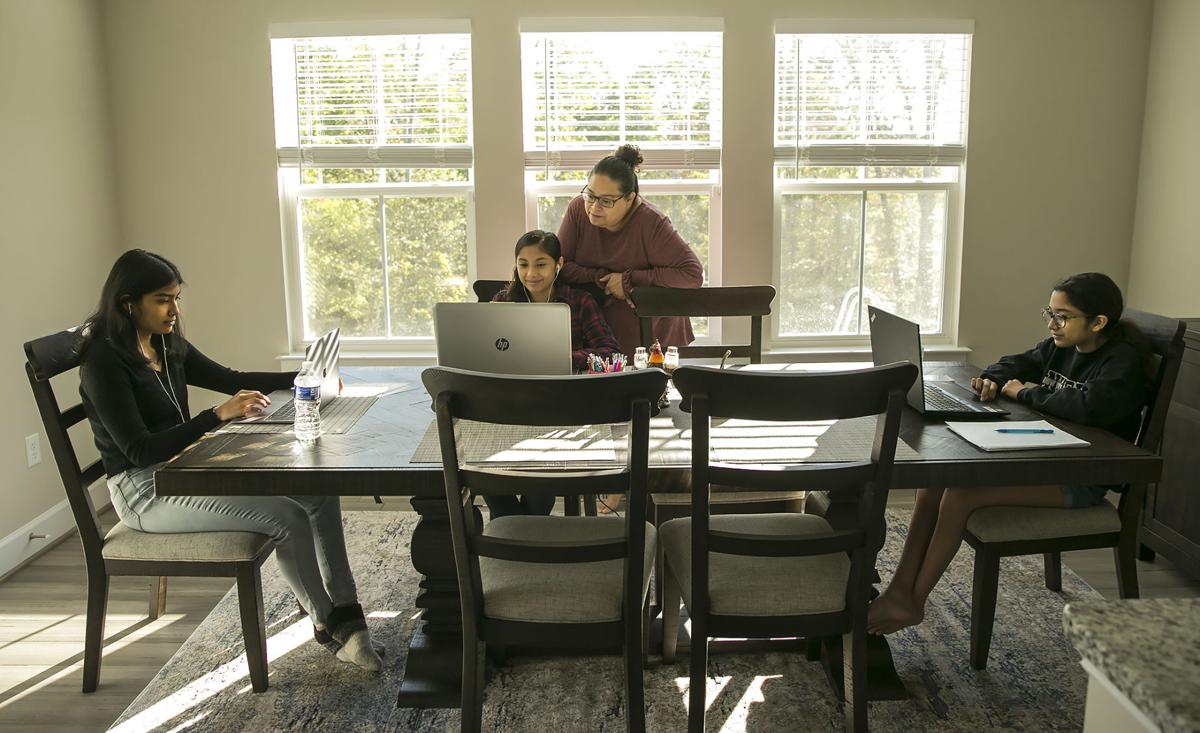 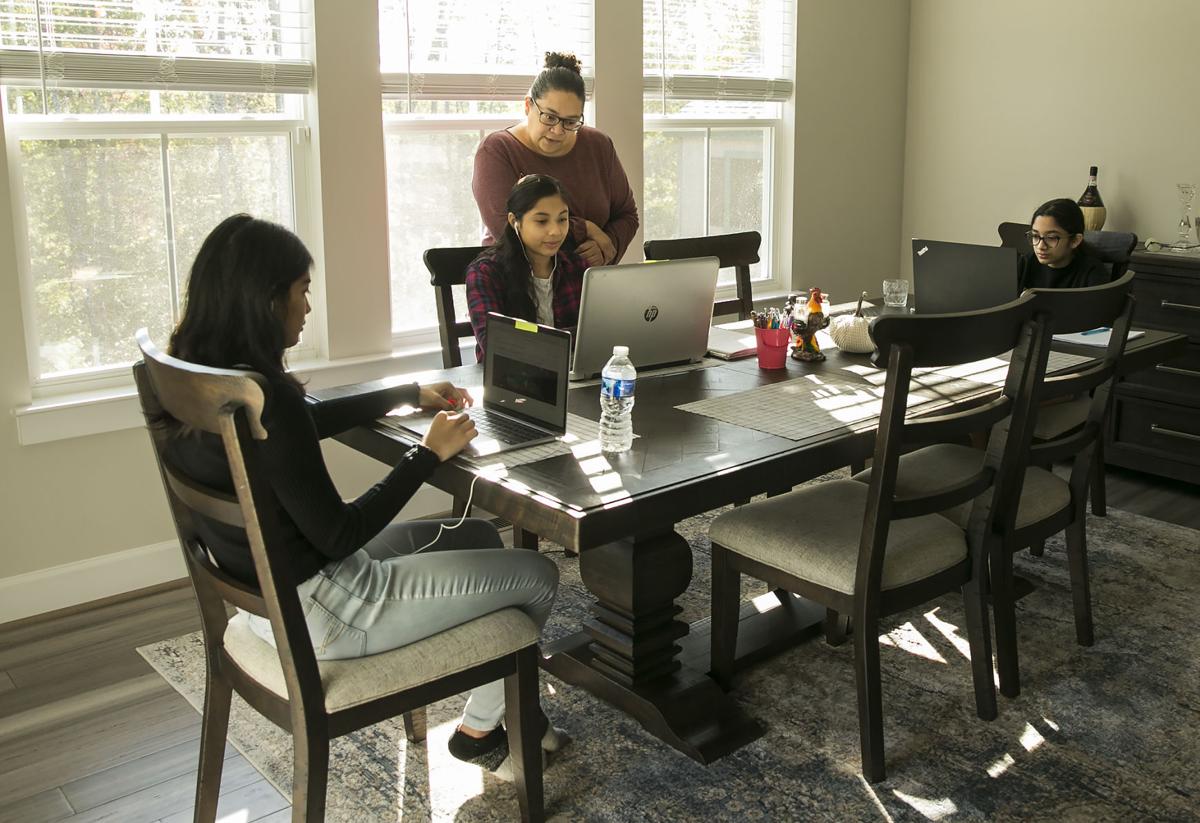 Nancy Marquina opted to have her daughters—Leani, Alejandra and Adrianna—enroll in K12, the state’s online public school option, because her father has Stage 4 cancer.

“We really liked her experience in public school,” Mason said. “She seemed happy, she adjusted pretty well and she was doing well academically. I feel like [Ferry Farm staff and teachers] did a good job of making school fun. She wanted to go every day.”

Then the pandemic hit and schools closed. Mason wasn’t happy with the virtual learning offered by the school.

“I didn’t think it was extensive enough. She needed more structure,” Mason said.

As summer progressed, Mason felt she was watching her happy, well-adjusted daughter regress in age and behavior.

“She’s usually a super great kid, very well-behaved. We never had issues [with her behavior]. But she was starting to throw tantrums and acting like her 3-year-old sister,” Mason said.

She and her husband suspected their daughter was suffering from being separated from other kids. So when the Stafford County School Board approved a 100 percent virtual start to the 2020–21 school year, they decided to pull her out of the system and enroll her at Holy Cross Academy.

“Naturally, yes, you’re a little bit worried they’re going to get [COVID-19],” Mason said. “But it’s worth it to us to try to get her back on track to where she was. And it does seem to have helped. She’s not having tantrums anymore and she is definitely happy to be leaving the house and seeing other people.

“We didn’t have a negative experience [with the public school system],” Mason continued. “It was just the pandemic.”

Area public schools are seeing lower enrollment numbers this year than last year, as the COVID-19 pandemic is causing some parents to choose private schools or home schooling for their children.

Most local public school divisions started the school year virtually for at least the first nine weeks. Spotsylvania County will begin a hybrid schedule Monday and others will do so later this month, but students will still only be in school buildings for a few days a week.

Most local private schools, however, reopened in August with in-person instruction five days a week, and with COVID-19 mitigation procedures such as face coverings and social distancing.

For working parents without child care, those who feel strongly about in-person instruction or their child’s need for socialization, those who don’t like the public schools’ virtual learning offerings or those who don’t want to take the risk of in-person school, private school or home schooling has been the solution.

Students leaving the public school system will result in a lower average daily membership, which is the count the state uses to determine public school funding.

In Stafford, as of early September, 471 students had withdrawn from the public school division for home school this year, compared with 162 last year. Spokesperson Sandra Osborne–Peters said the division doesn’t have information about how many families pulled their students for private school.

“The numbers we have rely upon parents self-reporting it to us, so it may not be 100 percent accurate,” she said.

Chris Fulmer, Stafford’s assistant superintendent of finance and administration, estimated in a Sept. 8 presentation to the School Board that this year’s average daily membership will be 760 students short of the budgeted number.

That translates to a loss of $4.5 million from the state. Combined with shortfalls such as a decline in federal revenue and state sales tax revenue, Stafford County Public Schools is facing a total revenue shortfall of $6.44 million, Fulmer estimated.

In Spotsylvania County as of Sept. 14, 1,519 students had withdrawn from the public school division for home school this year, as compared to 1,089 last year and 1,021 the year before. In addition, 142 students withdrew from Spotsylvania public schools for private schools this summer, compared with 33 last year.

Carol Flenard, deputy superintendent and chief academic officer for Spotsylvania County Public Schools, told the School Board Sept. 14 that parents have also shared that they are keeping kindergarten students home this year.

Under Virginia law, parents can keep children who are not yet 6 and who they feel are not mentally, physically or emotionally ready for kindergarten home until the following school year.

Spotsylvania School Board member Lorita Daniels said the division is estimating a loss of about $1 million from the state based on a lower-than-projected average daily membership, in addition to an estimated loss of $1.4 million in sales tax revenue.

Fredericksburg City Public Schools Interim Deputy Superintendent Matthew Eberhardt reported to the School Board Sept. 14 that the division is experiencing a total decrease of 145 students this year over last year. Of those, 116 are kindergarten students.

Hugh Mercer Elementary School in Fredericksburg, which saw its enrollment grow 14 percent between 2017 and 2019, and other area elementary schools could face an overcrowding issue next year if all kindergarten-aged students who are staying home this year come back to the public school divisions.

The city school division had 172 requests to home-school—100 more than last year, Eberhardt said—and 52 families indicated they were withdrawing for private schools.

“We need to recognize that we have an increase in home schooling as well as an increase [in students] going to private schools,” he said.

The city school division is now estimating an average daily membership of 3,429—about 130 students short of what had been projected. This will result in a decrease of about $497,000, according to Jennifer Brody, director of finance.

As of early September, Caroline County had 347 requests to home-school, compared with 237 last year.

However, Superintendent Sarah Calveric reported during an Oct. 6 joint meeting of the School Board and Board of Supervisors that current average daily membership is estimated to be only 60 students fewer than projected. That translates to a loss of about $325,000, Calveric said.

“We are pleased to say that we’re at 60—however, we wish we were at zero,” she said. “We’re hoping that when we get back to a model that is more face-to-face, that some of those students will re-enroll. We will be reaching out to them to entice them to come back.”

As public school enrollment dipped, applications to area private schools were up this year over last year.

“We could have been up more but we simply didn’t have space given the COVID restrictions,” she said. “We are sticking with the six feet of distance in our classrooms.”

A bill introduced for the ongoing special session of the Virginia General Assembly would have changed how school funding is allocated under a state of emergency.

Funding for a school year is usually based on the average daily membership—the average number of students present in a school district each day over a specific time period—calculated on March 31 of the previous school year.

Senate Bill 5069, introduced by Sen. Frank Ruff, R–Mecklenburg, would have allowed for funding calculated during a state of emergency to be based on the average of the current and previous school year’s average daily memberships.

The bill was tabled in early September by the Senate Finance Committee, with committee members mentioning that it could be addressed during the 2021 regular session, which begins in January.

The House of Delegates included an amendment to the biannual budget which would appropriate $95 million for local governments to dedicate to public education as a replacement for lost sales tax revenue.

On top of their regular budget needs, schools are facing additional financial pressure due to the pandemic. Some of these new costs include cleaning supplies and personal protective equipment for faculty and staff, technology equipment to support virtual learning, additional mental health services for families, expanded meal distribution, maintenance and updating of HVAC systems and human resource costs.

The federal CARES Act allocated money to public school divisions to assist with pandemic-related needs. Allocations are based on each school division’s relative share of 2019 federal Title I funds.

Local school allocations earlier this year ranged from close to $2.4 million for Spotsylvania schools, which has over 24,000 students, and $331,690 for the much smaller King George County school division.

Local governments also received federal CARES funds for pandemic expenses and some have transferred a portion of those funds to the local school divisions.

Stafford has allocated more than half of its $13.3 million in CARES funds to the school division, and Caroline appropriated about $1 million, or 37 percent, of its CARES funding for the schools.

On Thursday, Gov. Ralph Northam announced that Virginia school divisions would receive $220 million—$175 per pupil—in money provided to the state under the CARES Act.

According to the Richmond Times–Dispatch, most of the money already is reflected in budget proposals adopted by the House of Delegates and Senate in special session.

‘Only when it’s safe’

Nancy Marquina of Stafford pulled her 11- and 15-year-olds from public schools this year mainly because her father lives with her and has Stage 4 lung cancer. The children are enrolled in K12, Virginia’s online public school option.

She felt the Stafford School Board took too long to come to a decision about how to start the school year. She grew frustrated with the “back and forth” and started to lack confidence in the board’s decision-making abilities.

“I was afraid [the school division] would not give us the option to stay virtual,” Marquina said. “That was my thing. I didn’t know if they were going to continue offering the virtual or if they would make everyone go back to school in January.

“I think right now, I would love them to go back,” she added, “but only when it’s safe.”

Spotsylvania is one of only six public school divisions—and the only division in Virginia—to make the list of the 500 best midsize employers in the nation.

Germanna Community College will rename its engineering lab and classroom after former College Board Chair Harold Scheibe, in recognition of hi…

Since last summer, the Community Engagement Committee and its related subcommittees have been trying to meet the needs of a Fredericksburg school community separated by the pandemic.

Nancy Marquina opted to have her daughters—Leani, Alejandra and Adrianna—enroll in K12, the state’s online public school option, because her father has Stage 4 cancer.