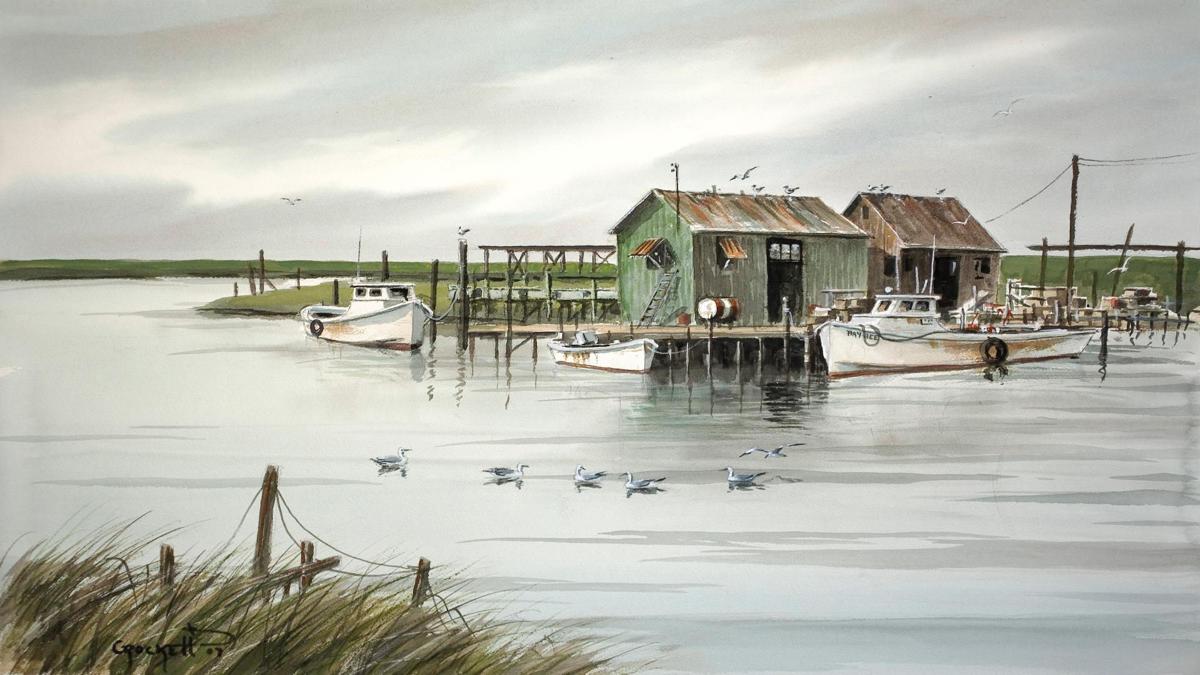 Crockett was one of the Eastern Shore’s most celebrated artists and his work showed his understanding and love of the area. 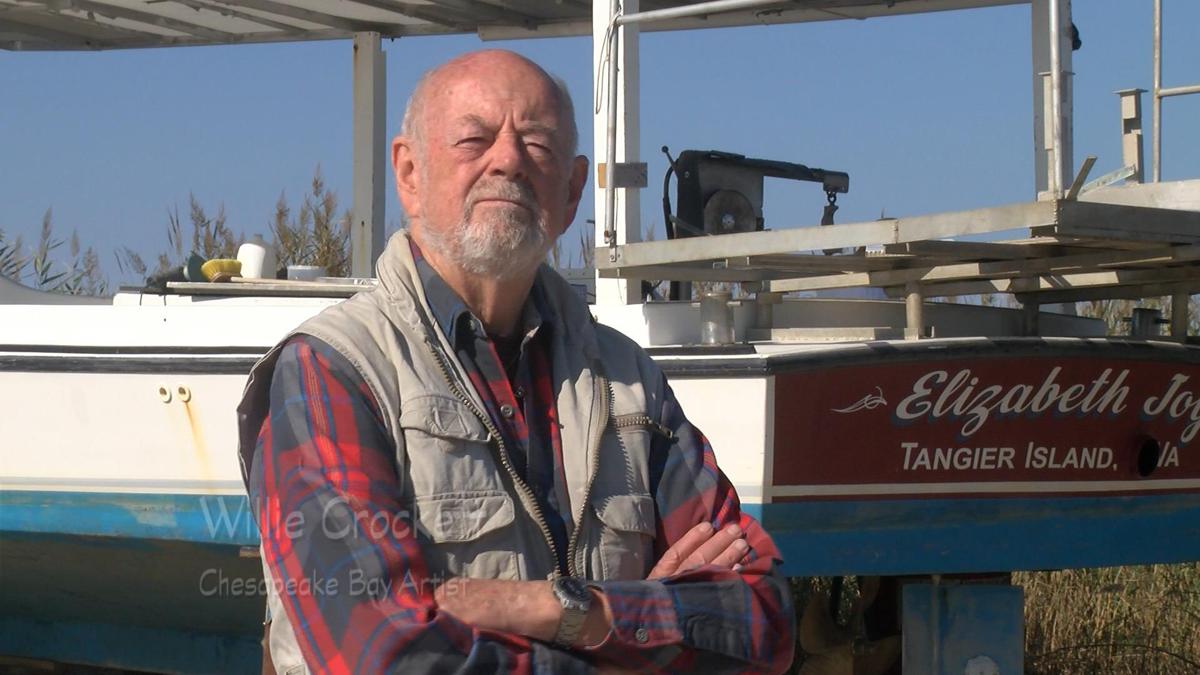 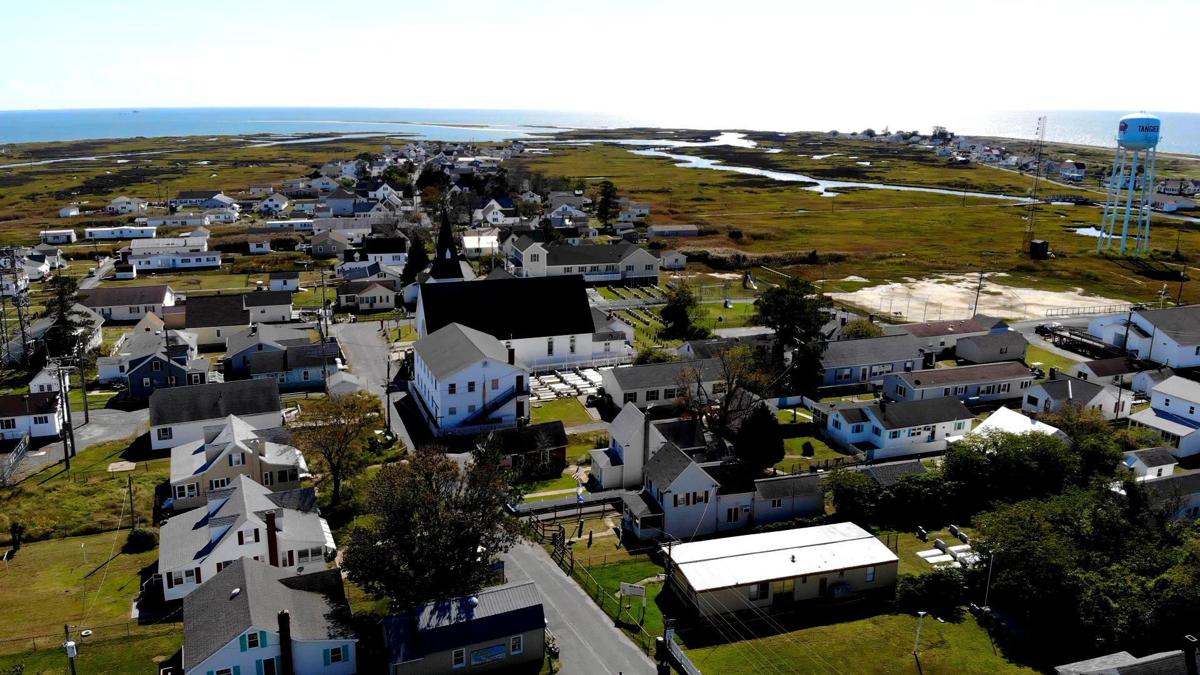 Drone footage of Tangier Island is also part of the documentary. 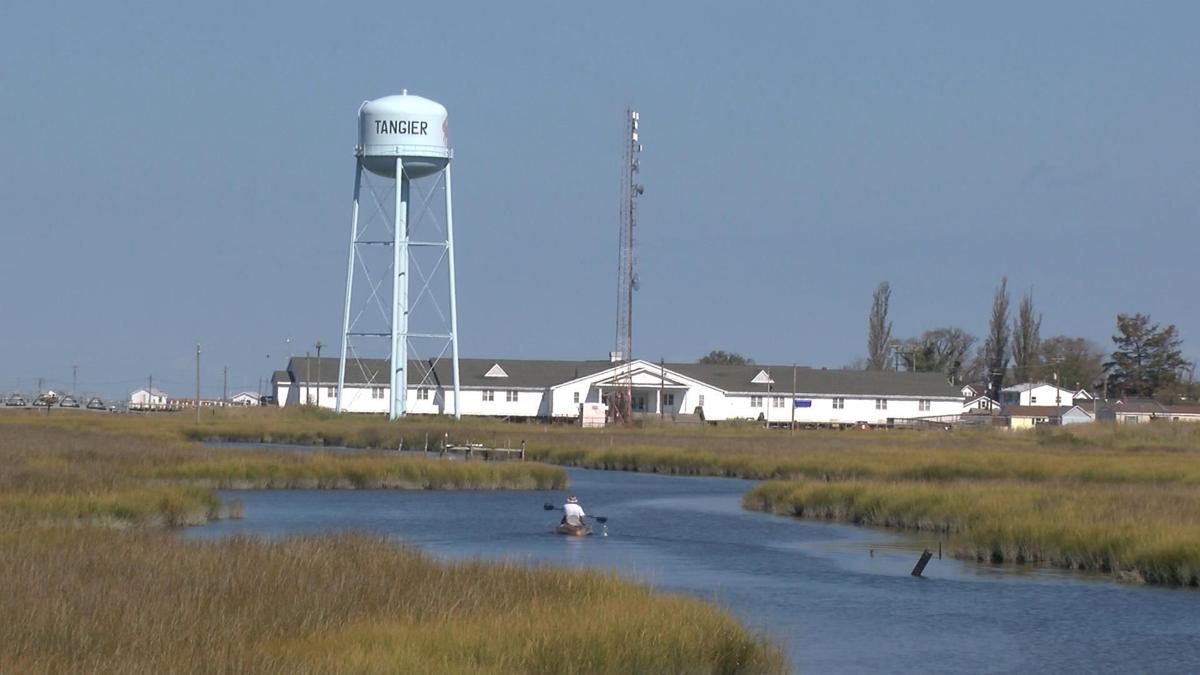 Dave Miller and Willie Crockett toured Tangier as part of the film, including a turn down Tangier Creek. 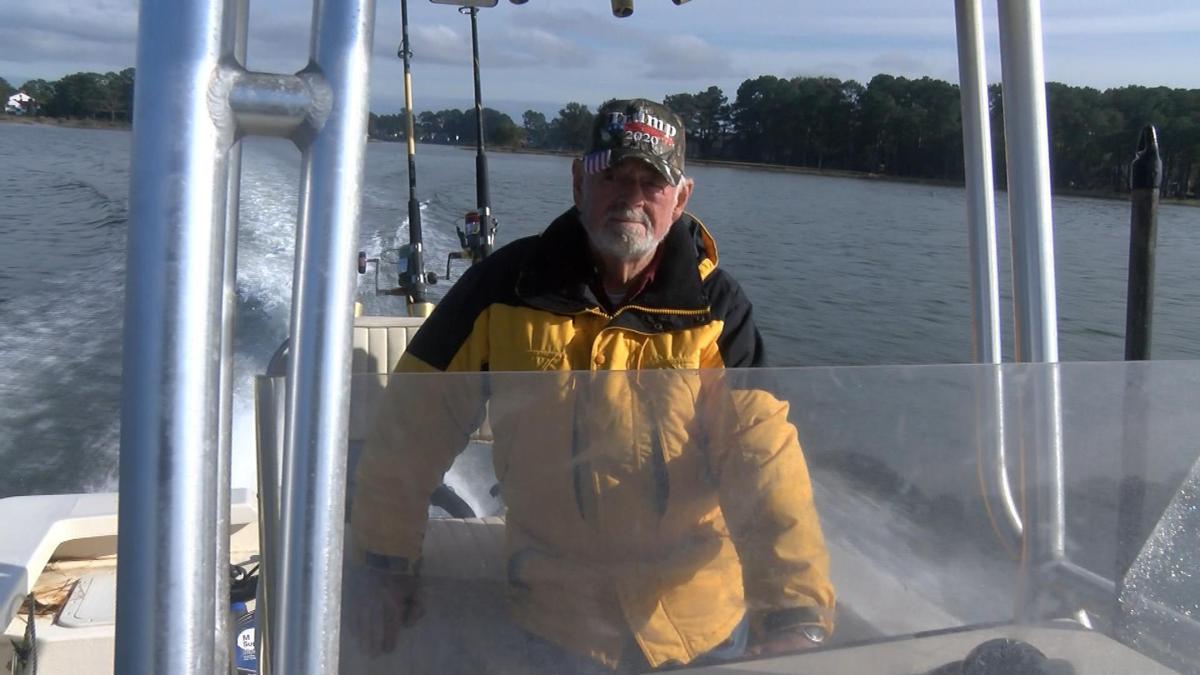 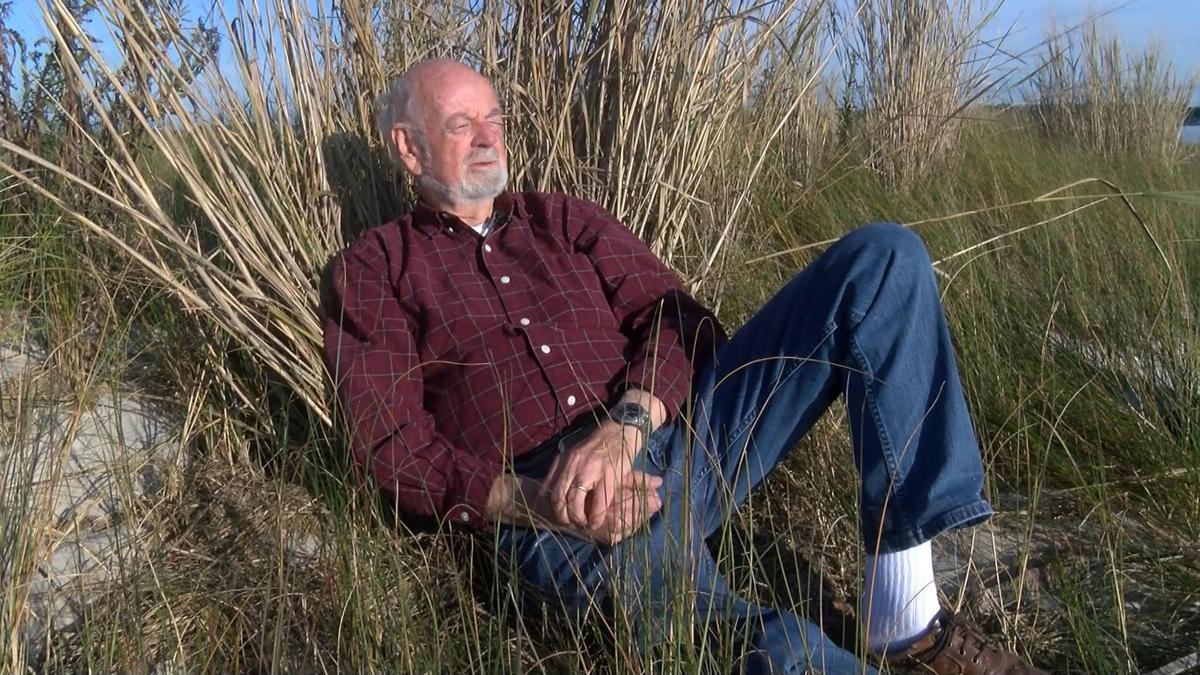 Tangier Island native Willie Crockett felt a connection to the scenes and wildlife he painted. 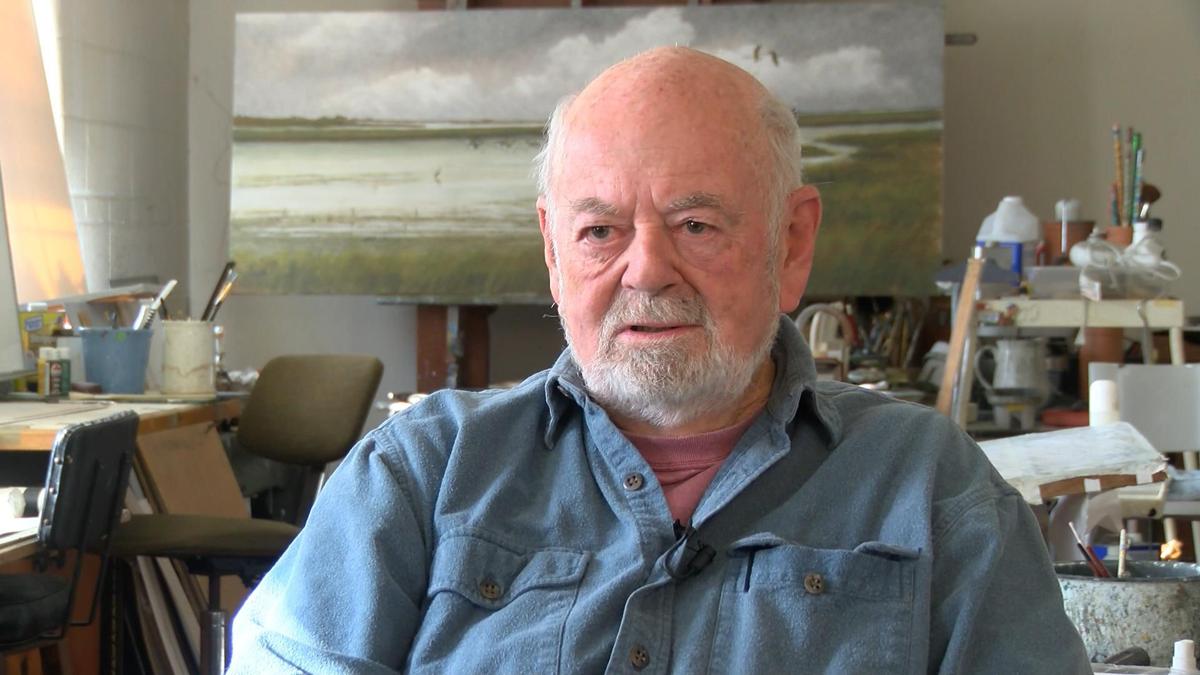 Willie Crockett was a waterman, preacher, artist and poet. 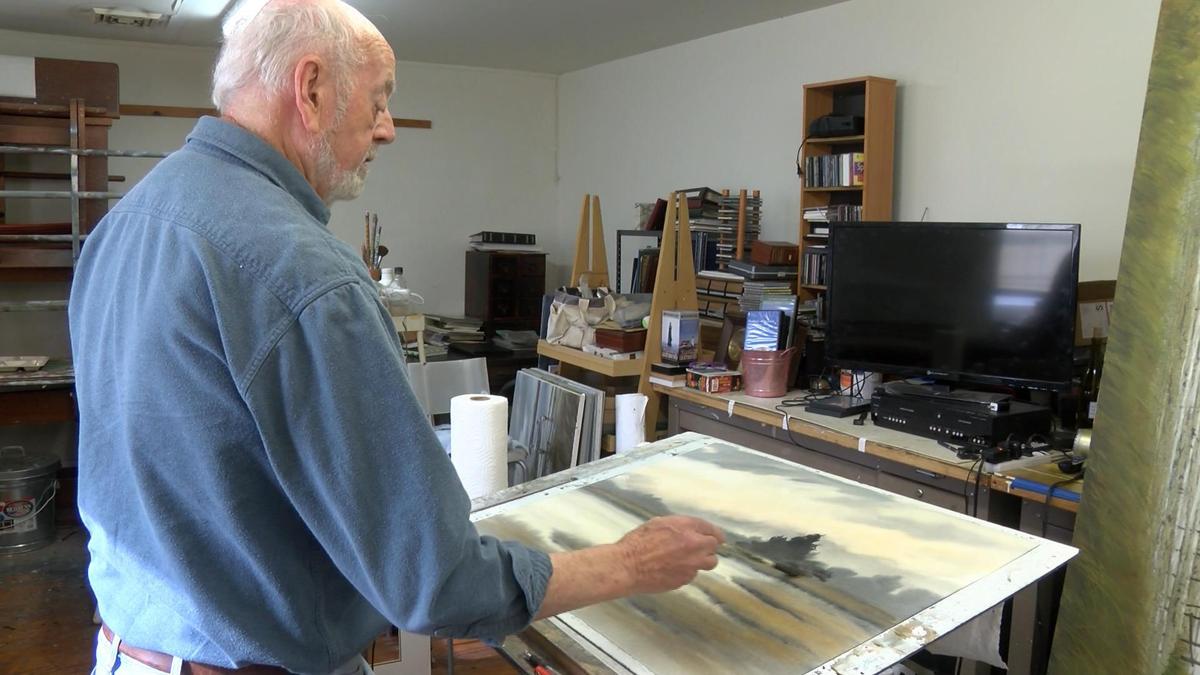 Willie Crockett, the focus of a new documentary, liked to build in features that would draw in viewer's attention, be that boats, people or wildlife. 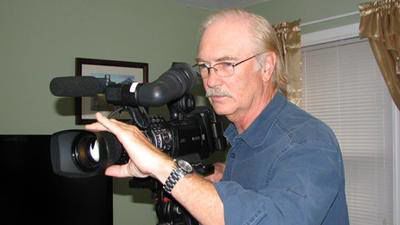 I love talking with Dave Miller, a local filmmaker who always has a fascinating story to share about his latest production, be it about Chesapeake watermen or the inventor of diving bells.

This time out, Miller was excited to share details of his latest film, a one-hour documentary completed during a year of COVID called “The Art of Willie Crockett and Virginia’s Eastern Shore.”

At its center is Crockett, a polymath who at different times in his life was a waterman, artist, poet, preacher, trapper and a free thinker who kept a white board chock full of new ideas at his studio at Onancock on Virginia’s Eastern Shore.

I caught up with Miller recently at his home in King William County and he shared details about the interviews and footage he shot for the film to shed light on Crockett and the Eastern Shore that became his home.

Two weeks later, Miller shared the sad news that the artist known for his landscapes and nature scenes had passed away unexpectedly.

Miller said he is deeply saddened, but glad the story of Crockett’s life and art was saved on film.

He heard about Crockett from a friend while shooting a piece on an oyster operation on the Eastern Shore, and wasted no time scheduling a visit to the artist’s studio and gallery in Onancock.

“I saw right away that working with him would be fun, because at 82 he still got out and did stuff,” said Miller, noting that the artist wasted no time hustling the pair onto his 25-foot skiff to see the scene he was painting.

“We’re heading down Onancock Creek and at that time I didn’t know that its name literally means ‘foggy creek.’ The fog out there got so thick you couldn’t see your hand in front of your face,” said Miller. “We saw a fogbow, a rainbow in the midst of a dense fog. And he showed me the sandbar and explained why it was in his painting.”

Miller said that early on, he and the film’s sponsor—IPAC/ Marine Environmental Research Corp., a nonprofit dedicated to preserving the culture and heritage of the Chesapeake Bay and Virginia’s Eastern Shore—decided that in addition to profiling Crockett, it wanted the documentary to capture the history and culture of the Eastern Shore.

To that end, it includes interviews and footage at the Eastern Shore Watermen’s Museum and Research Center, the Mutton Hunk Fen Natural Area Preserve and other spots. It also shows many of Crockett’s paintings.

But the heart and soul of this new film is Crockett, who Miller said was a magnet for folks who wanted to talk philosophy, politics, poetry or one of the hundreds of other topics the “unlikely intellectual” loved to discuss.

The filmmaker said Crockett’s work on the water with his father growing up on Tangier Island in the Chesapeake Bay formed connections visible in his art.

“The Bay, Tangier’s Creeks and the wetlands on Tangier he grew up seeing are the types of things he would paint,” said Miller. “Like all kids growing up on the island back then, he learned the names and everything he could about every kind of boat, crab, bird and type of wildlife he saw. He spent his days with cousins in a little skiff on the creek, playing with and catching crabs, hunting ducks.

“Often, his paintings were a little dark or moody,” said Miller.

He was able to film an interview with the well-known Richmond maritime artist John Barber about Crockett’s artistic style.

“Of course, it turned out he knew Willie and they were friends, having sailed together years before,” Miller said.

Miller’s documentary covers Crockett’s early history. The son of a preacher, he was ordained at a Southern Bible college, then headed out to Washington state and Oregon before moving to Onancock in the 1970s. By then, he’d left the ministry and worked various jobs before his paintings began to sell.

“For a while, he was a very successful trapper, studying it well enough so he could trap enough animals to get his quota but not deplete the animals at any one location,” Miller said.

Crockett had a style where he started with a landscape and then slowly built in depth and added elements to bring viewers into his paintings, be those boats or dogs or ducks.

“Looking at his paintings can give you a feeling that you’re actually there,” said Miller. “His paintings have depth and character, kind of like Willie. They take you to another place, maybe a spot and time that doesn’t exist, though you wish it could.”

Miller said doing the film during a pandemic was challenging. But he accomplished it by shooting outside and adhering to strict safety protocols.

Some opportunities, such as finding musicians whose tunes grace the film, came from making connections at well-known Eastern Shore restaurants: The Great Machipongo Clam Shack in Nassawadox and Mallard’s at the Wharf in Onancock.

Even the way Miller and Crockett met on Tangier to film segments was unusual.

“He got in his boat in Onancock and made the 40-minute drive to Tangier, and I did the same from my beach house in Fleeton [at the Bay-side tip of the Northern Neck]” said Miller.

“We got a four-wheeler for the day and went to Pruitt’s Boatyard and did an interview there, then went down the road Willie lived on and to the family graveyard,” he said, noting that they even worked in an interview with Tangier’s mayor, James “Ooker” Eskridge.

“Around 3 that afternoon, Willie looked out to the Bay and said we’d better call it a day if we were going to get home,” said Miller.

He said the seas didn’t look too bad to him at the time, but Crockett saw something different.

“He was right, and I ended up having to bang my way back to Fleeton through the chop,” Miller said. “He still knew how to read that water.”

To stream the documentary or see others Miller has created, go to gumroad.com/seachaser210.

Crockett was one of the Eastern Shore’s most celebrated artists and his work showed his understanding and love of the area.

Drone footage of Tangier Island is also part of the documentary.

Dave Miller and Willie Crockett toured Tangier as part of the film, including a turn down Tangier Creek.

Tangier Island native Willie Crockett felt a connection to the scenes and wildlife he painted.

Willie Crockett was a waterman, preacher, artist and poet.

Willie Crockett, the focus of a new documentary, liked to build in features that would draw in viewer's attention, be that boats, people or wildlife.