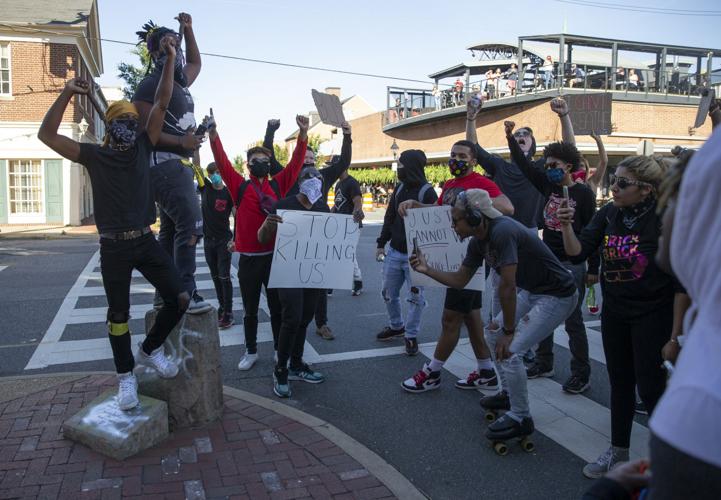 Protesters stand on top of the slave block in Fredericksburg during a demonstration in June. 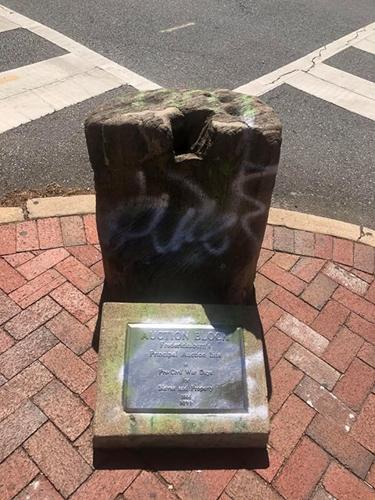 The slave auction block was vandalized during a protest earlier this year. The city later removed it and will display it in the Fredericksburg Area Museum.

Fredericksburg’s controversial slave auction block has been professionally cleaned and will be loaned to the Fredericksburg Area Museum early next month.

It will go on display there by mid-November at the earliest, with graffiti spray painted during several protests last summer intact.

“Temporarily, the block will be located in a manner that is accessible but with clear signage that indicates the tone of the graffiti. It will be the visitors’ option to ‘see’ it firsthand, or see it as an image,” said Sara Poore, FAM’s president and CEO.

The roughly 800-pound stone block was removed from the corner of William and Charles streets June 5 after nearly three years of debate and discussion, including community-wide sessions conducted by the International Coalition of Sites of Conscience.

City Council had voted to remove it last December and loan it to FAM, where it could be exhibited with more detail about its history than the simple brass plaque that had identified it as “Fredericksburg’s principal auction site in pre-Civil War days for slaves and property.” That process was delayed by two unsuccessful lawsuits to keep it in place and concerns about city staff tackling the project during the COVID-19 pandemic.

The auction block was still in the spot where it had been since 1843 when protests began in downtown Fredericksburg last May following the death of George Floyd during his arrest by police in Minneapolis. It served as a way stop along processions, with some protesters standing on top of the stone and others spray painting it with graffiti.

Fredericksburg officials finally had it excavated, and Dovetail Cultural Resources Group began the delicate work of hand cleaning the stone’s surface to remove years of dirt. It is being stored in a temperature-controlled space while FAM prepares a temporary exhibit for it in what is currently its River Gallery. The permanent exhibit isn’t expected to open until 2022.

In the meantime, the museum continues to research both the block and the community’s Black history, and a community committee is being organized to guide the themes that will be used in the permanent exhibit.

“We will also discuss the recent events and the impact the stone has/had on the conversation,” Poore said. “It is our goal to use the stone as a springboard for community conversations.”

The city of Fredericksburg also consulted with its Memorials Advisory Commission to design a temporary panel called “A Witness to History” that will be installed at the auction block’s original site. It includes a 1910 photo of a Black man standing next to the block and a photo of the stone as it was being removed in June.

The panel is being fabricated now, and could be installed within a few weeks. It’s expected to remain in place until plans for the permanent interpretation of the site are finalized and installed.

A key concern expressed repeatedly during the International Coalition of Sites of Conscience discussions was the need to tell a more complete story about Fredericksburg’s Black history. When City Council accepted the final ISCS report last year, council members requested that the Memorials Advisory Commission be tasked to tell that story in any new tourism material, scripts, signage and the film shown at the Visitor Center.

As a result, the city is developing three new wayside panels and staff members are evaluating the film shown at the Visitor Center and making recommendations, said Angela Freeman, who heads the city’s new diversity, equity and economic advancement officer.

The wayside panels will be:

• French John’s Wharf. John DeBaptiste, a free Black man who served aboard Fielding Lewis’ sloop-of-war Dragon during the American Revolution, established a commercial wharf that became known as French John’s Wharf and operated a ferry there. The panel is anticipated to be located on Canal Street.

• Freedom Riders Challenge a Nation. The original 13 Freedom Riders left Washington on May 4, 1961, and headed for the bus station that used to stand at the corner of Princess Anne and Wolfe streets near where the fire station is now. It became the first stop of the non-violent test of the segregated interstate travel law, and was organized by James Farmer. The panel is anticipated to be located at the old bus stations site.

• Green Book. Two Fredericksburg hotels, the McGuire and Rappahannock, were in the Green Book, a travel guide published during the segregation era. It listed businesses which offered travel accommodations to Black customers. The panel is anticipated to be located on Princess Anne Street adjacent to the Post Office.

A new temporary panel will be on display at the slave block site in Fredericksburg.

What You Need To Know About Monkeypox

These are the Most Popular U.S. Cities to Move To

These are the Most Popular U.S. Cities to Move To

Protesters stand on top of the slave block in Fredericksburg during a demonstration in June.

The slave auction block was vandalized during a protest earlier this year. The city later removed it and will display it in the Fredericksburg Area Museum.