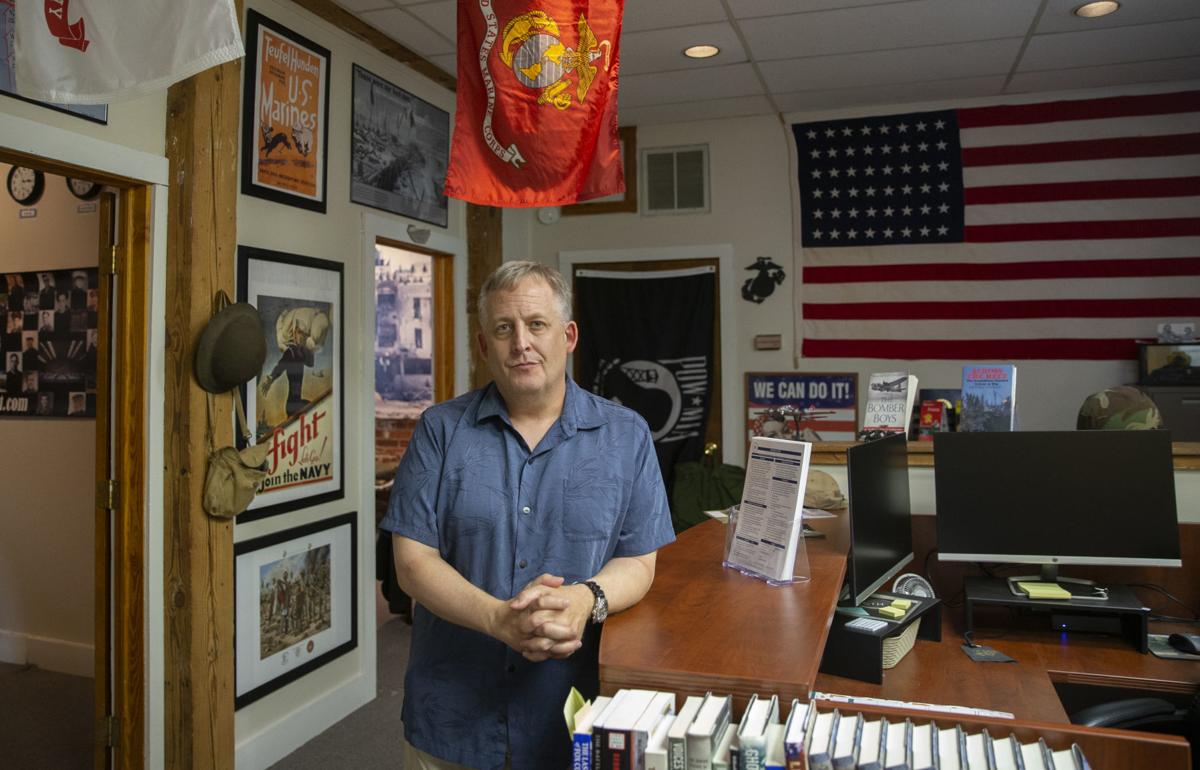 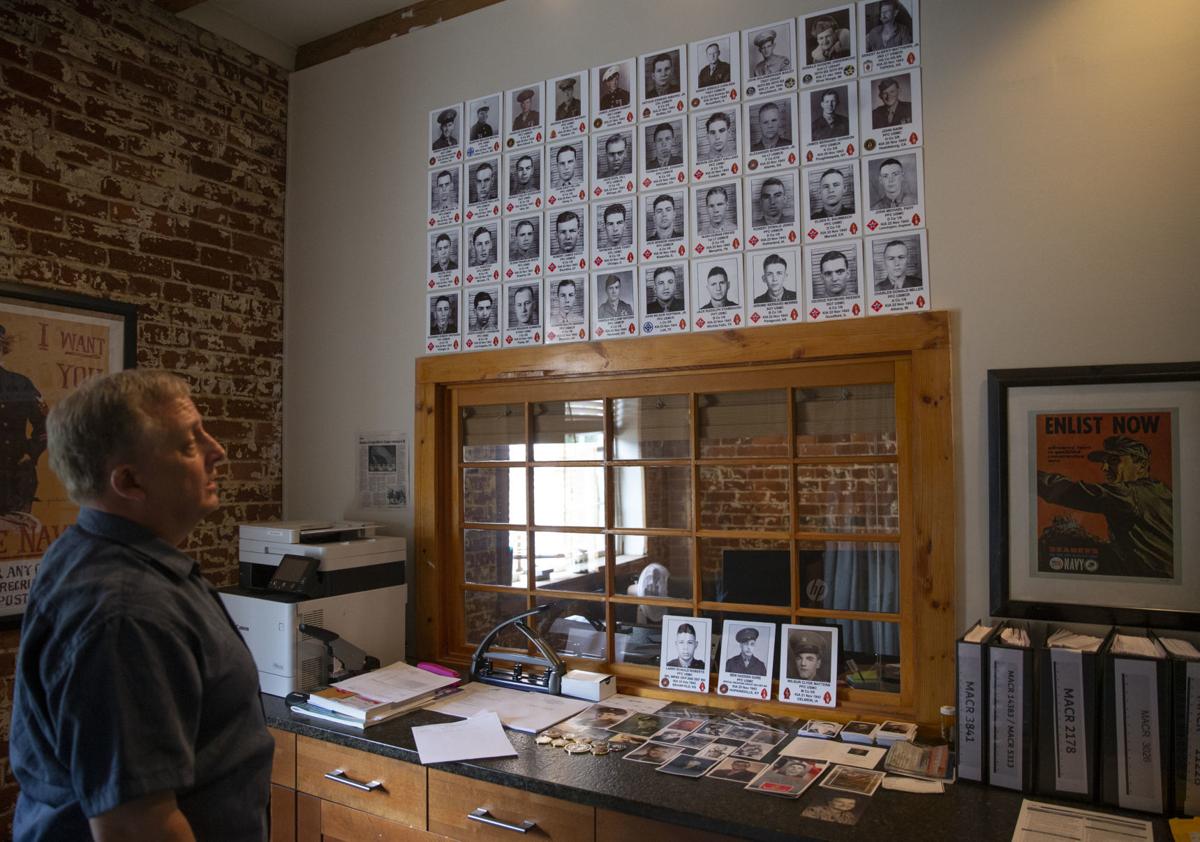 History Flight’s Justin LeHew looks at photos of World War II service members whose remains have been recovered from the island of Betio, where much of the Battle of Tarawa took place. 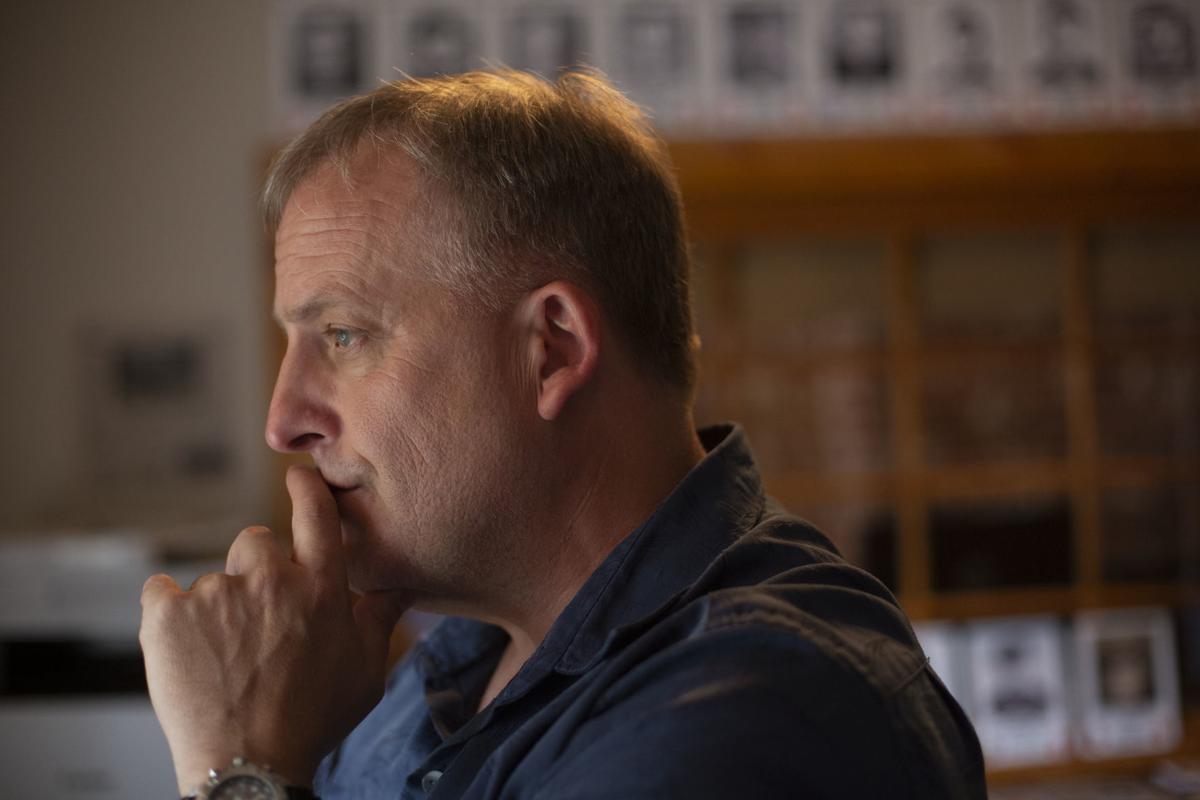 LeHew has traveled to Tarawa five times to look for remains.

LeHew, chief operating officer of History Flight, a Fredericksburg-based MIA search and recovery organization, is leading recovery operations for those servicemen left behind during the Battle of Tarawa, fought nearly 77 years ago.

Already this year, LeHew, and the History Flight team of 20 archaeologists, geophysicists, explosive ordinance specialists and medical personnel, have recovered 14 sets of remains from the small island. Although the conflict is widely known as the Battle of Tarawa, LeHew said most of the fighting actually took place on the small island of Betio, in the extreme southwestern portion of the Pacific atoll.

In 2019, an additional set of 79 remains of servicemen were recovered and another trip to the island is planned this summer, once coronavirus-related flight restrictions are lifted to allow air travel.

According to the group’s website, History Flight’s recovery teams use a combination of old-school and the latest in technology, including remote sensing gear, cartography, ground-penetrating radar and cadaver dogs to locate remote, forgotten grave sites.

History Flight was formed in 2003 by Mark Noah, who flies Boeing 767s as a captain for UPS. Noah serves as president of the servicemember recovery organization.

LeHew said Noah and several other history enthusiasts initially became interested in missing WWII servicemen while taking their own vintage military aircraft to airshows across the country, where they offered rides to veterans, earning the name: History Flight.

It was during those flights that Noah and his fellow pilots would hear countless stories of missing American servicemen who still remained unaccounted for in battlefields across the globe. The group went to the National Archives and Records Administration to confirm some of those claims, and Noah soon expanded the scope of his business to conduct recovery missions himself, along with a team of scientists.

In 2007, Noah made his maiden trip to Tarawa and discovered his first set of remains rather easily.

“You walk down the two main roads and people were displaying skulls of American servicemen,” said LeHew.

LeHew said one woman visited during Noah’s first trip had two buckets full of bones on her porch. Noah recovered those remains and turned them over to U.S. officials for identification. Since that trip, Noah has led more than 50 other recovery projects.

To date, History Flight has recovered 325 sets of remains worldwide, many of them from the island of Tarawa. In April 2012, Noah traveled to Europe to learn more about the loss of 10 Martin B-26 Marauders during a Dec. 23, 1944, attack on a railroad bridge near Eller, Germany. Noah’s team located nine of the 10 crash sites.

For his semper fidelis spirit, Noah was named an honorary U.S. Marine in 2015 by the commandant of the U.S. Marine Corps in ceremonies at Quantico’s National Museum of the Marine Corps. It was during this ceremony that Noah first met LeHew, who was serving on active duty at the Marine Corps Training and Education Command. The two did not keep in touch after their initial encounter, but as LeHew’s retirement approached in July 2018, he reached out to his acquaintance to inquire about joining the History Flight team. LeHew was immediately offered a position and has since made the journey to Tarawa five times himself.

LeHew said 240 missing sets of remains have been recovered from the island, and there are still about 300 remaining. In addition to Marines, LeHew’s team has also recovered remains of other veterans from America’s greatest generation who had long been forgotten.

LeHew said the body of a young sailor, killed in 1944 while changing a .50-caliber machine gun installed in an airplane’s wing, was recently recovered.

“They buried him in the main Marine cemetery with the guys who were killed in battle,” said LeHew. “As we’re finding Marines, it turns out, we’re finding others.”

LeHew said this is not the first time the military buried its dead in haste in the Pacific theater.

“Marines did the best they could to record where men were buried,” said LeHew. “It was hastily done. It didn’t just happen at Tarawa, it happened at Iwo Jima, Guadalcanal, Saipan, everywhere over there.”

After Tarawa’s battle, U.S Navy Seabees bulldozed all the debris off the former Japanese airfield and extended the runway to the western end of the atoll and applied a coral surface, creating Hawkins Field.

“During that, some of the guys were moved to another place on the island,” said LeHew. “This began the process of losing bodies.”

History Flight is funded by a mixture of private donations and by the Defense POW/MIA Accounting Agency.

LeHew said that agency has $145 million budgeted to recover missing servicemen. Ninety percent of that budget goes toward recovering missing servicemen from the Vietnam conflict, and the remaining 10 percent is set aside for the recovery of 72,000 still missing from WWII and the Korean War.

LeHew said when recoveries are made, the remains are turned over to government scientists for DNA analysis and then on to the military for next-of-kin notification.

“I search the world and I find them,” said LeHew. “The U.S. government still has the mandate to identify them.”

LeHew, a retired sergeant major of the Marine Corps and a recipient of the Navy Cross for extraordinary heroism during Operation Iraqi Freedom, as well as the Bronze Star for valor in combat, said one of the toughest jobs he performed while on active duty was serving as a casualty assistance calls officer. In that capacity, he personally delivered the news of a death to the next of kin of those killed or missing in action.

LeHew said the process of notifying families after 77 years is still delivered to families in the highest, most reverent, solemn fashion, as if the serviceman was killed just the night before.

“An active-duty person is sent to the family to pass the news,” said LeHew. “Then I get the call after one of those recoveries, and the best thing is, it isn’t the crushing tears of sadness, now it’s nothing but 100 percent tears of joy.”

History Flight’s Justin LeHew looks at photos of World War II service members whose remains have been recovered from the island of Betio, where much of the Battle of Tarawa took place.

LeHew has traveled to Tarawa five times to look for remains.