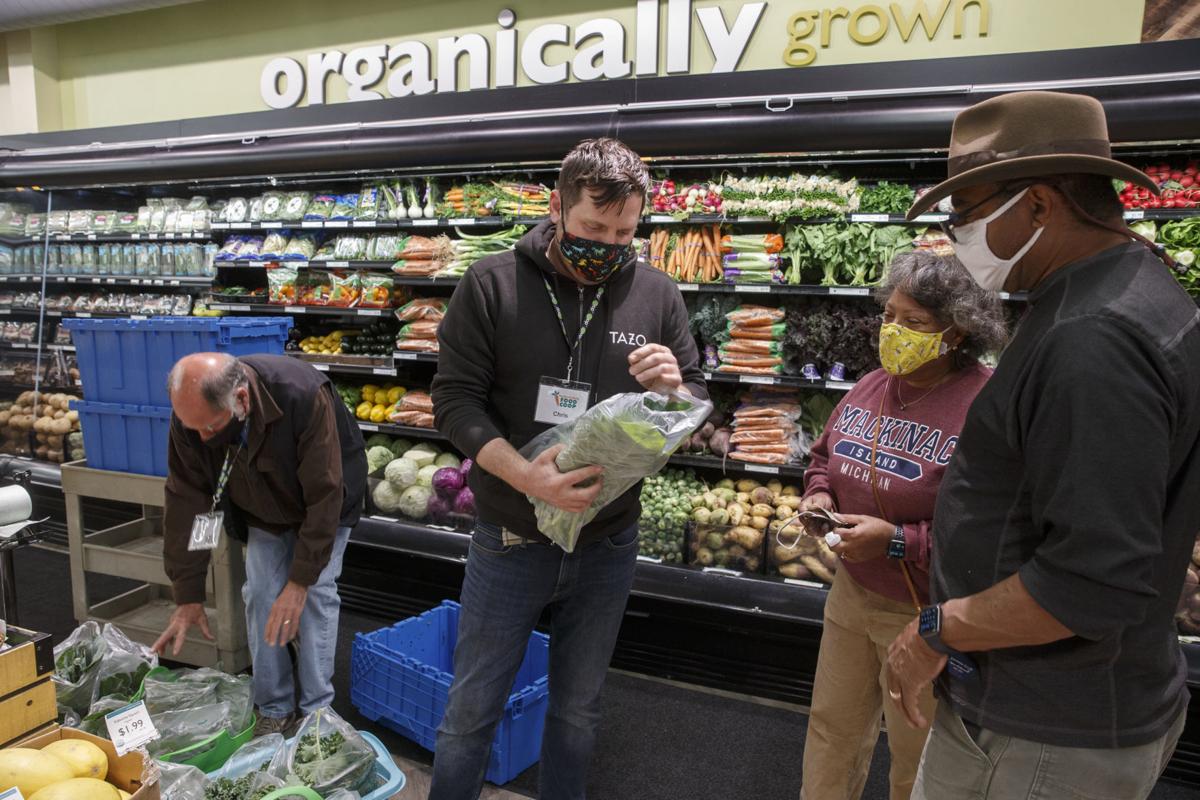 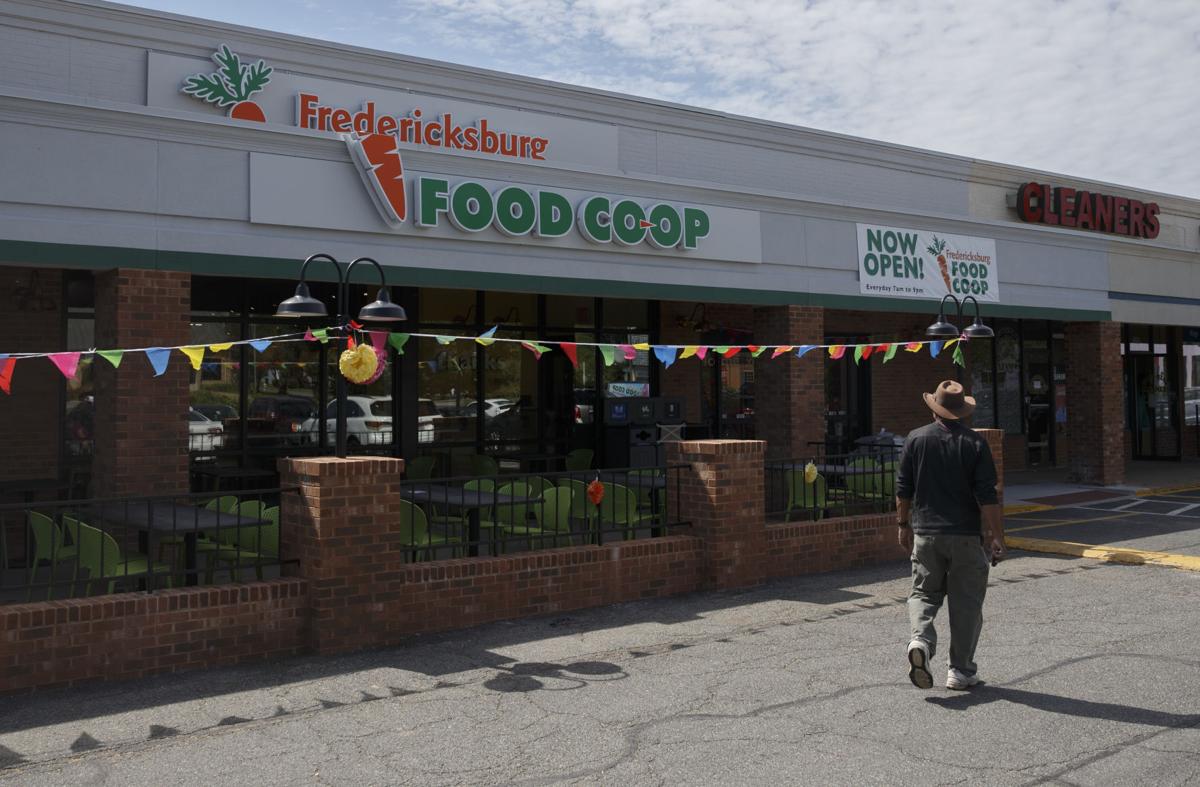 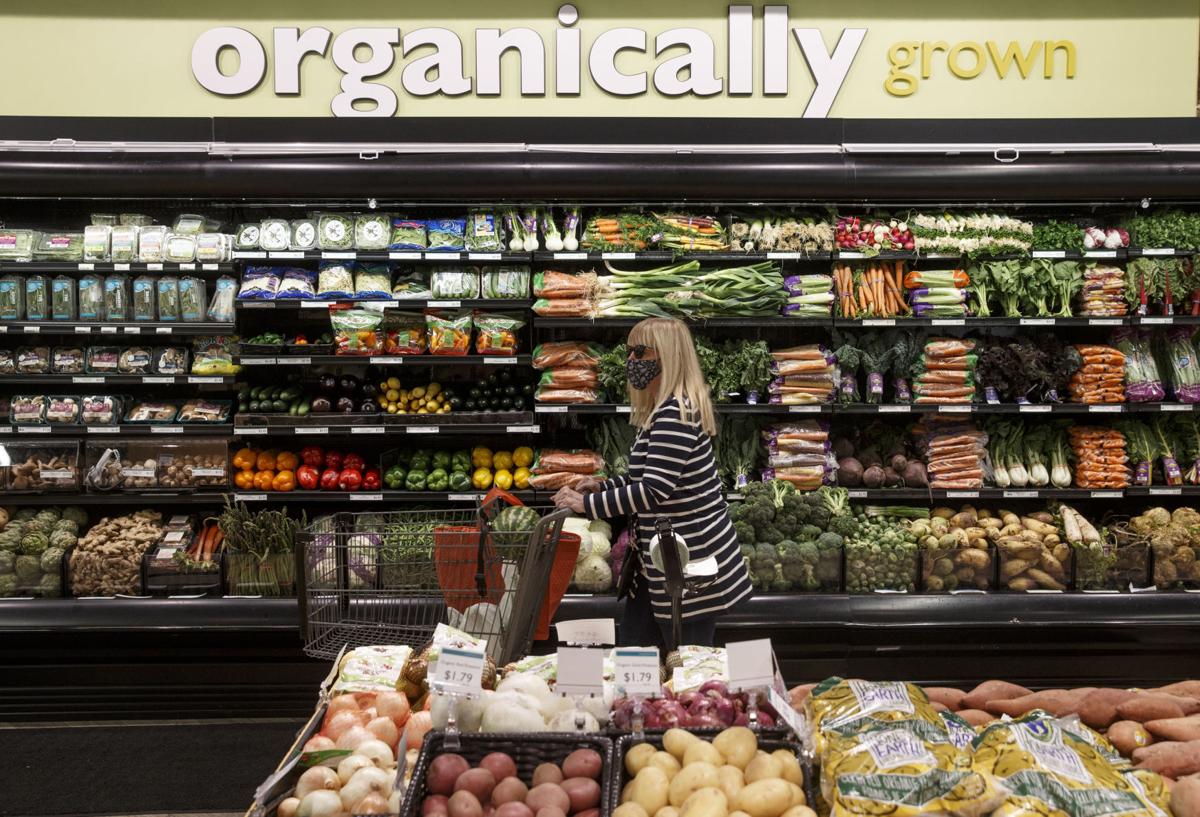 The Co-op gives local farmers a venue to sell their produce. 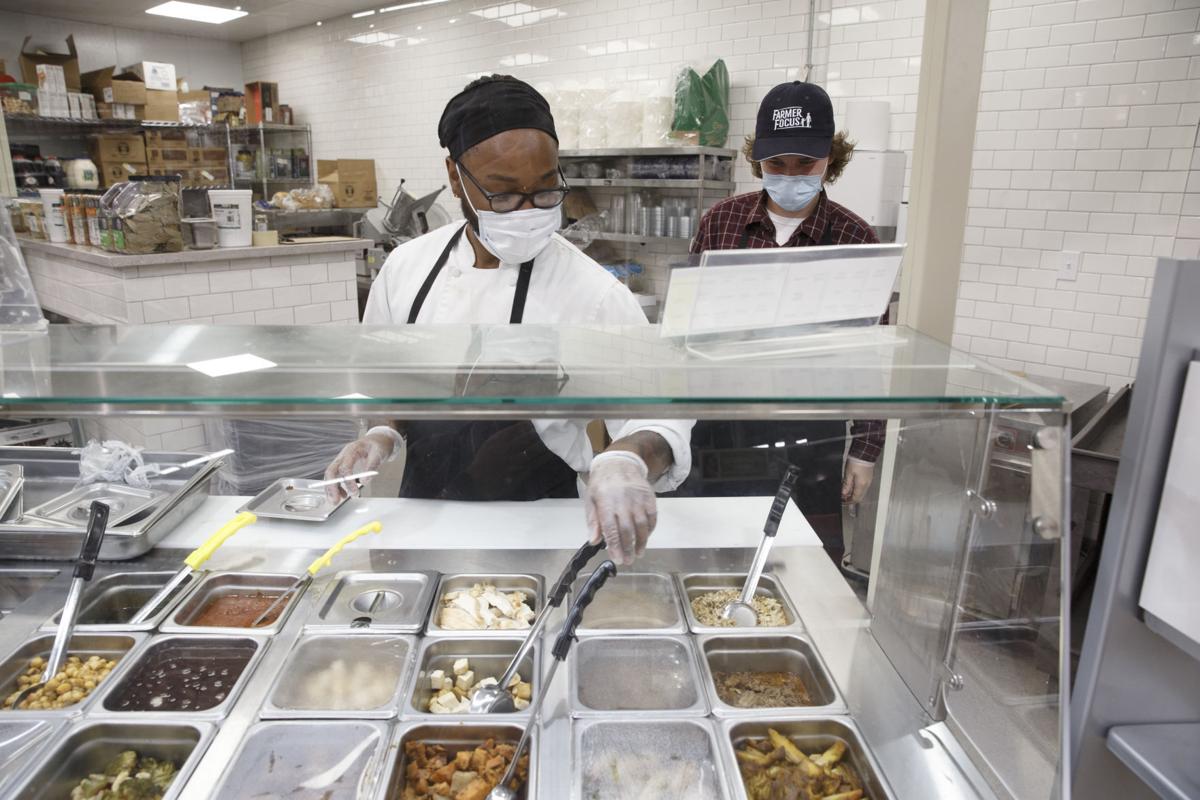 Andrey Walters sets up a prepared food station at the Fredericksburg Food Cooperative. 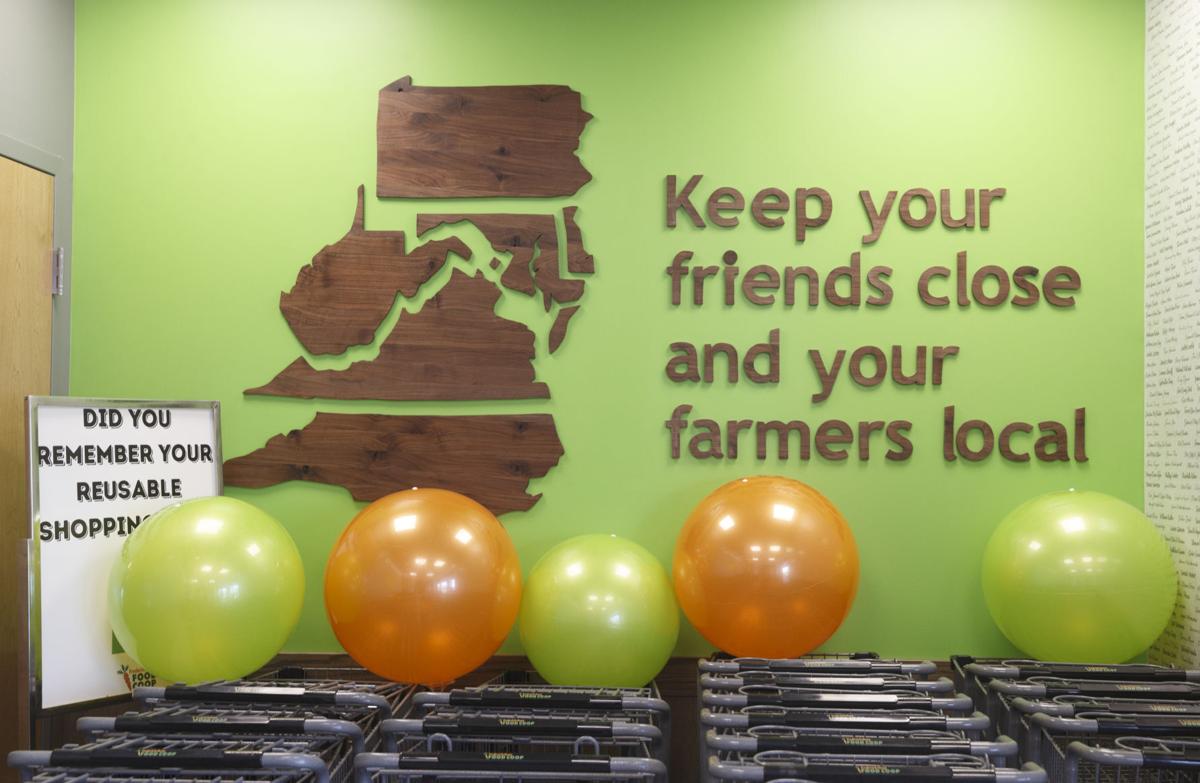 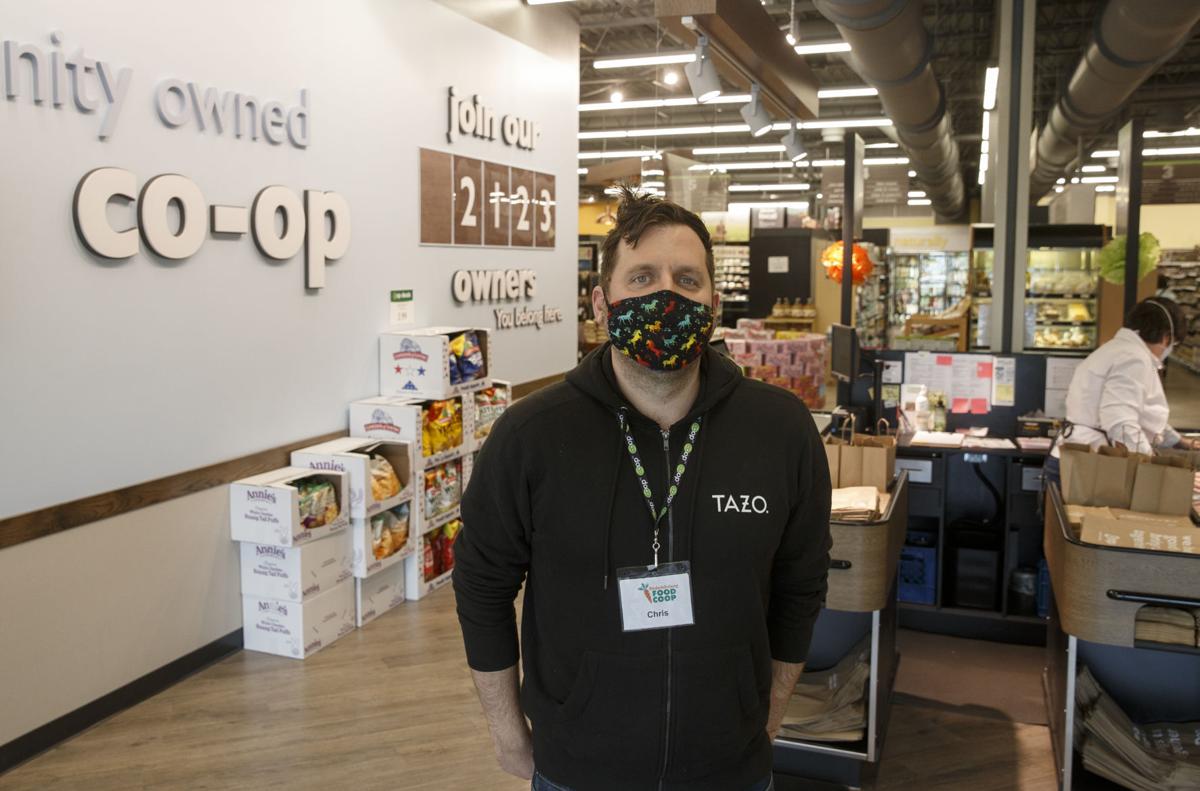 The Fredericksburg Food Cooperative opened quietly at the corner of U.S. 1 and Princess Anne Street on April 1, but the response from the community has been nothing short of boisterous.

The store at 320 Jefferson Davis Highway in Lee Plaza is open from 7 a.m. to 9 p.m. seven days a week. After the soft opening in April, the Co-op celebrated its grand opening last week with a ribbon-cutting and events that included sessions where locals could learn about soap-making, planting vegetables from seed, growing mushrooms and roasting coffee.

Young patrons also got to participate in kid’s yoga and everyone got to take in live music and try samples of pizza, kombucha and pie.

“You don’t have to be a member to shop here” or to come to events, Manager Chris Roland said. “The Co-op is open to everyone.”

The store has hired 30 workers so far and Roland expects to add five more positions during the first year of operation.

“Thousands and thousands of shoppers have been through the doors,” he said, and they have purchased “tens of thousands of items” during the store’s first six weeks in business.

The Co-op is a full-service grocery store that purchases from local suppliers first. For any product it offers, Roland asks, “Can we get this locally?”

The shelves feature lettuce from Culpeper, soap from Fredericksburg, tortillas made downtown, locally made dog treats, and even beer and wine from the area. Roland said the Co-op is adding about two new local providers per week.

One of the providers is Hayfield Farm in Fauquier County. Owners Erica and Dylan Butler sell beef, pork, chicken and dairy products from their farm store and offer weekly pickups in locations around the region. But providing steaks and other cuts to the Co-op allows them to reach a larger audience—and show how their way of farming without chemical fertilizers, antibiotics or growth hormones creates a product local residents can feel good about eating.

They’ve also joined up with the Co-op to reduce food waste. To ensure that scraps and expired food doesn’t end up in a landfill, the store offers it to local farmers for compost or animal feed.

Erica Butler said the pigs at Hayfield “are smitten with the variety,” especially the potatoes. Their pigs are 300 pounds by the time they are processed, so they’ll eat just about anything, she added.

FIVE YEARS ON THE MAKING

While the store is open to everyone, membership has its benefits.

Members get an additional 10 percent off already-discounted deals. The main benefit, though, is financial dividends, meaning members receive payouts if the store makes money. Rather than seeking to maximize profits, cooperatives make decisions based on maximizing service to their member–owners and the community.

The store opened with about 1,000 members—and the founding members’ names adorn the entryway—but now has 2,158 member-owners. A lifetime membership costs $200 and was one of the main ways start-up costs were raised.

The journey to raising $4.3 million and opening the store began on a Sunday five and a half years ago. And after their local vegetarian group meeting, Rich Larochelle, Gloria Lloyd and Valerie Setzer discussed how they could support local agriculture and healthy eating in Fredericksburg area.

They came up with the idea for the cooperative and started a grassroots effort. The Co-op incorporated in September 2015 and started offering cooking classes, holding informational meetings and showing up at farmers markets to sign up new members.

In 2016, a University of Mary Washington survey showed that a majority of locals polled said they would support a food cooperative in downtown Fredericksburg. This market study also indicated that the area could support a 10,000-square-foot market.

In its quest to build membership and raise funds, the Fredericksburg Co-op garnered national attention. It won the “Best of the Best” award at the Up & Coming Startup Food Co-op Conference in 2019. That same year, it was accepted into the National Co+op Grocers, giving it access to wholesale pricing on items that aren’t grown or produced locally.

It was around this time that Larochelle realized the store was well within reach. Memberships raised $800,000 and an additional $400,000 was given in donations.

A total of $1.7 million was raised during two loan campaigns in the community and the Co-op secured the rest of the funding needed through a $1.4 million bank loan. The Fredericksburg Food Co-op was the first food co-op in the U.S. to receive a Small Business Administration guarantee for that loan due to its strong local financial support and the growing national sentiment for cooperatives.

Its success, Larochelle said, shows the sense of place and community in Fredericksburg. He believes the Co-op embodies the four core values he and other organizers agreed to at the beginning:

Co-op leaders now see the store as an engine to being connection back to locals.

That was obvious at 1 p.m. on a recent Thursday. It was past the lunch rush and the mad dash of workers on their breaks picking up staples, but there were still five tables of diners outside and two inside enjoying lunch.

There were two checkout stations going and employees were giving out local recommendations to customers. People ran in to grab coffee and filled Co-op totes featuring “I own a grocery store with a bunch of my friends” in bold black letters on the side.

Maria Negron of Fredericksburg was one of the locals eating lunch outside with a friend. They had healthy “power bowls” made of greens, grains, protein and fresh local vegetables.

Negron operates the Will’s Place food truck with her husband. She was impressed with the vision of the Co-op, became a member before it opened and has shopped there multiple times since.

“I love the local focus,” she said. “But especially I like that healthy food is readily available here.”

Along with lunch, she picked up items for a friend and food for home. And she’s thinking about working with the Co-op to sell her food truck’s products ready-made.

Roland, the manager, has 15 years of experience with food co-ops and has led two operations in Arizona and Chicago. He said while those markets were bigger, they didn’t have more a more supportive ecosystem.

“The community here has been feverish in support for their Co-op,” he said.

As he took in the scene on a recent weekend, with people eating made-to-order food, laughing and enjoying themselves and the live music making its debut, Roland said it was clear that the Co-op was becoming “part of the community—a gathering place where people can share food and ideas and have fun together.”

And, he added, that was just what he and the organizers intended.

The Fredericksburg Food Cooperative also wants local input. To make suggestions about the store and the products you want to see there, use the suggestion box in front of the grocery store or contact them through their website: https://fredericksburgfood.coop.

Dozens of dogs left in Afghanistan after U.S. evacuation

Dozens of dogs left in Afghanistan after U.S. evacuation

Why these coffins hang from cliffs in the Philippines

Why these coffins hang from cliffs in the Philippines

Opposition demonstration banned by authorities in Kinshasa suppressed by police

Opposition demonstration banned by authorities in Kinshasa suppressed by police

More than 5,000 Fredericksburg-area students have been quarantined since start of school year

More than 5,000 public school students and staff in the Fredericksburg area have been quarantined due to exposure to COVID-19 since the 2021–2…

Two people in the same car were charged with driving while intoxicated Sunday after the car was wrecked in Stafford County during an argument,…

The Co-op gives local farmers a venue to sell their produce.

Andrey Walters sets up a prepared food station at the Fredericksburg Food Cooperative.