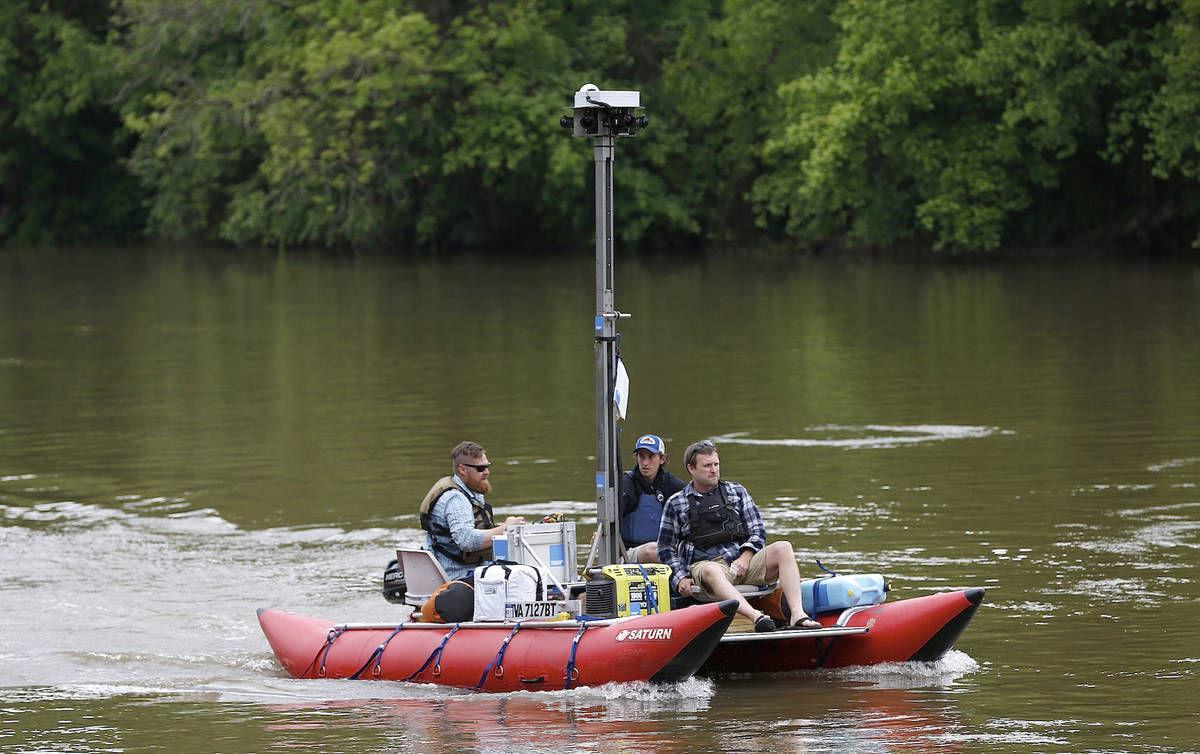 Ryan Abrahamsen, Andrew Hawkins and Rob Campbell capture images of the Rappahannock River for the Chesapeake Conservancy on Monday. 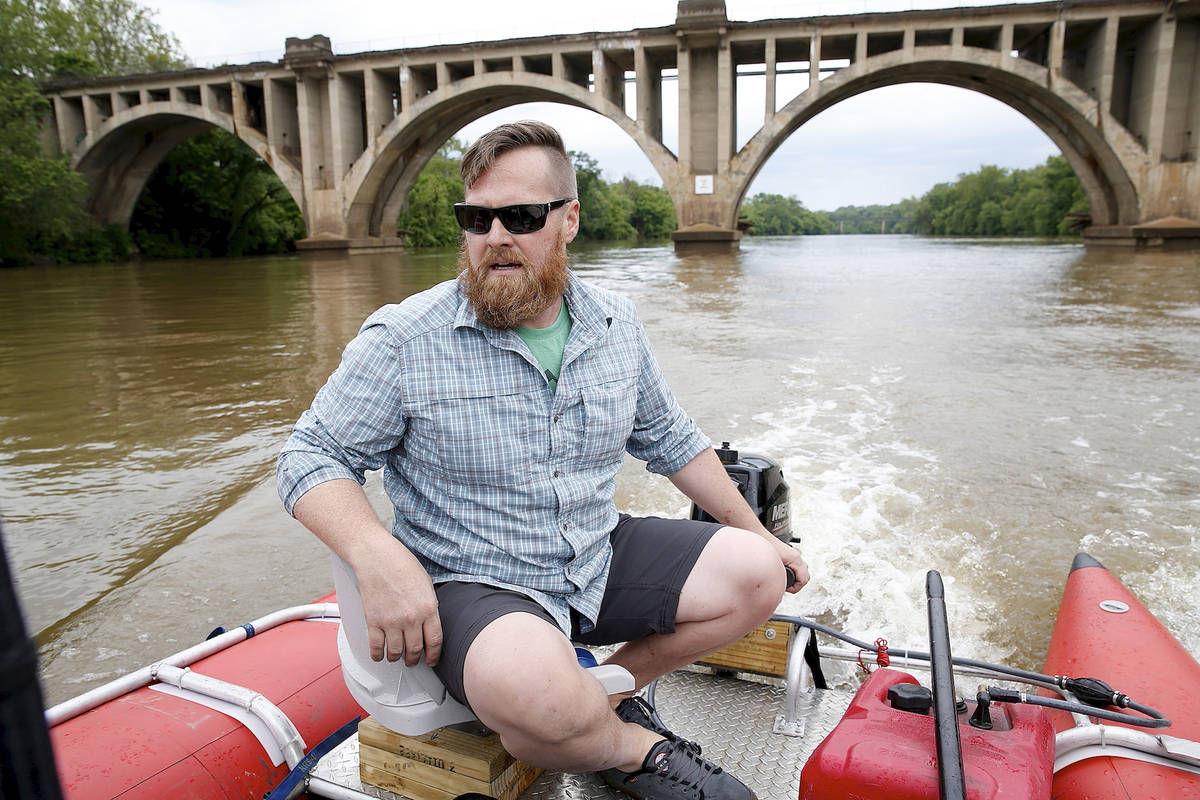 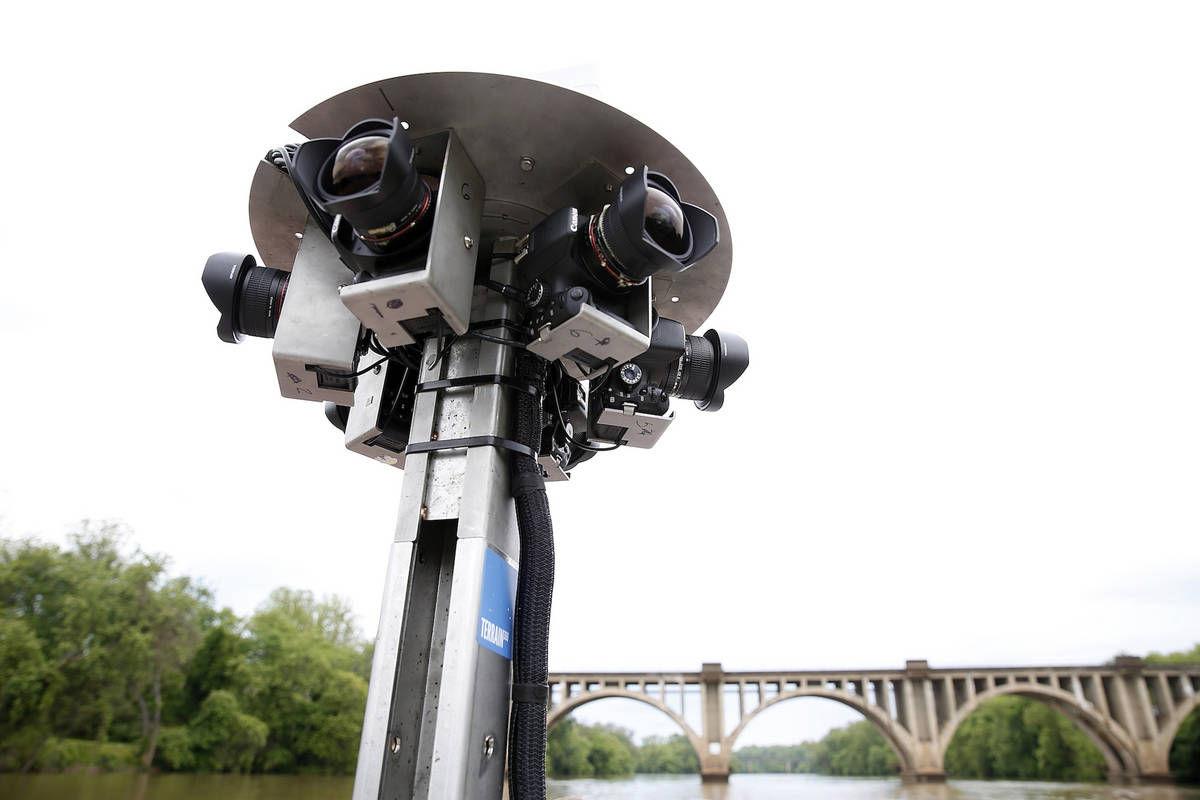 The Chesapeake Conservancy has hired Terrain360, which is using its one-of-a-kind vessel equipped with six cameras to capture images along the Rappahannock River. 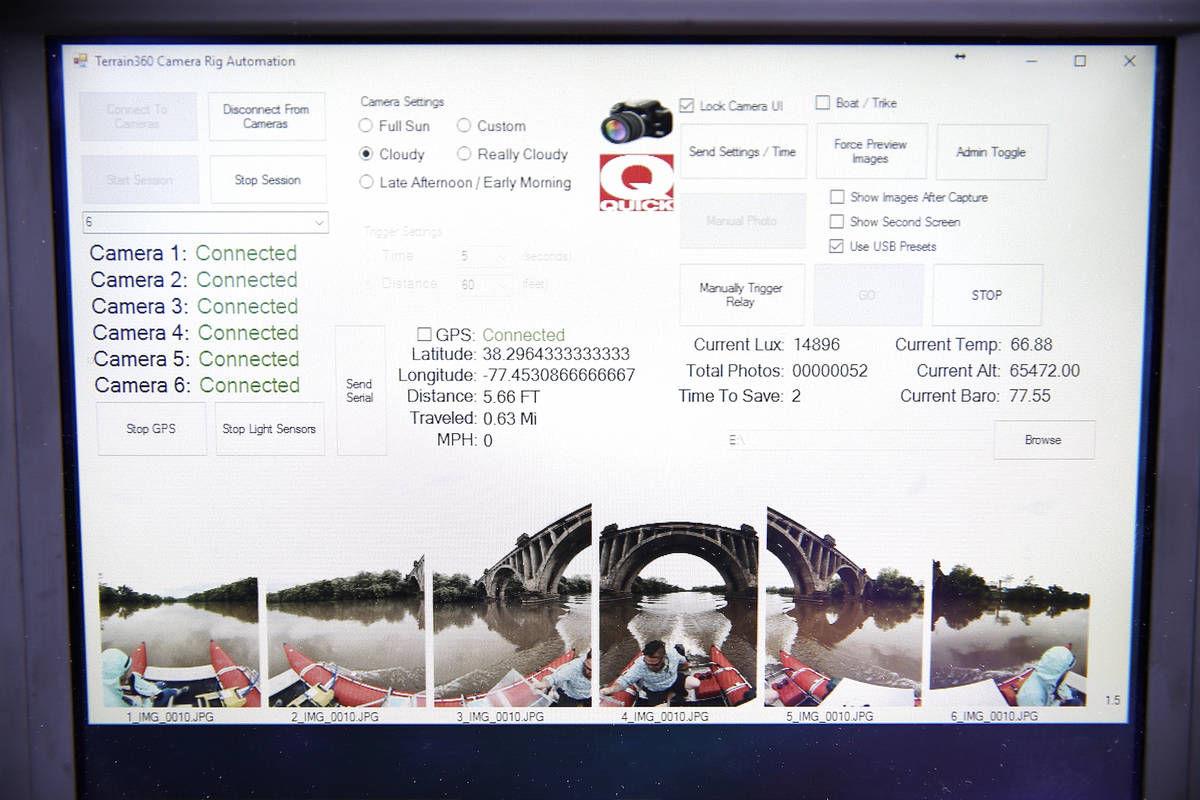 This computer screen shows images of a rail crossing over the Rappahannock River. Terrain360 cameras capture images at intervals, then stitch them into a digital map.

A quirky-looking craft launched at Fredericksburg’s City Dock Monday will soon give people a virtual tour of the Rappahannock River.

Richmond-based cartography company Terrain360 is using a pontoon boat with a 10-foot high “mast” topped with six cameras instead of sails. They capture high-resolution, 360-degree images every 50 feet, which software will stitch together to create a digital image map. It should be ready in August.

“It’s sort of like a Google Street View of the river,” said Joel Dunn, president and CEO of the Chesapeake Conservancy.

His nonprofit, which is based in based in Annapolis, worked with the National Park Service to create the Captain John Smith Chesapeake National Historic Trail a decade ago. It began using Terrain360 last year to create Google Earth-like tours of the waterways that Smith and his crew explored and mapped by hand more than 400 years ago.

“It’s a 3,000-mile trail, but it has very limited access—98 percent of the shoreline is private,” Dunn said.

Showing those rivers and the bay shoreline, the access points and the wildlife that abounds there on the Conservancy website will help encourage people to get out and enjoy it, learn to love and protect it—and fight to conserve it, he said.

“Physical access is important, but you also have to give people mental access,” Dunn said. “You have to get them inspired to get a boat on the river or a kayak on top of their car. Once you get going, you get the wonderful experience.”

He said that he’s always looking for ways to use the latest technology to encourage conservation and learned about Terrain360 while working on Envision the James, a project done in partnership with the James River Association.

“I was simply dazzled by the power of the technology and the imagery, and immediately decided it was a way to inspire the public about the Chesapeake Bay and our great rivers,” said Dunn.

The Chesapeake Conservancy got funding for the multiyear project from an anonymous donor and kicked it off last year by having Terrain360 film and map the Susquehanna, Nanticoke and James rivers. The latter was done in partnership with the James River Association.

Ryan Abrahamsen, co-owner of Terrain360, said he and his crew have seen bald eagles, river otters, sturgeon and occasionally some illegal fishing as they head down river on their 8-by-14-foot boat. To shoot a stretch of the James near Lynchburg, they had to get permission from Georgia Pacific because there was no public access.

“Those were waterways that people hadn’t seen in years,” he said. “It was really cool.”

Chesapeake Conservancy also got Terrain360 to create a virtual tour of Mallows Bay on the Potomac River last year. The bay boasts the largest collection of historic shipwrecks in the Western hemisphere, and the company was able to add photos of what they’d originally looked like.

Mallows Bay is a proposed National Marine Sanctuary. After WTOP aired a segment about the virtual tour, it got so many visits—more than 100 per minute—that the Conservancy’s server crashed, Dunn said.

His organization plans to post virtual tours of three or four rivers a year until the project wraps in 2018. Terrain360 is currently photographing the Rappahannock from Fredericksburg to the mouth of the river and could potentially go back and do the rest up to the fall line.

Dunn said that he’s especially interested in showing Fones Cliffs, a four-mile stretch of Richmond County that rises more than 100 feet over the Rappahannock and provides important habitat for the largest concentration of eagles on the East Coast.

That area is currently in line for a large development project the Conservancy opposes. Richmond County supervisors approved a rezoning in November that will allow a resort and spa and more than 700 houses to be built on the forested cliffs overlooking the river.

“Every time I go down the Rappahannock past Fones Cliffs I am in awe of what a magical place it is,” Dunn said. “I hope [the virtual tour] inspires visitors and people to conserve it and build a community that prioritizes conservation going forward.”

On a recent weekday, a little armada of boats met out in the Rappahannock River near Fones Cliffs. They ranged from a Downeast lobster craft t…

Ryan Abrahamsen, Andrew Hawkins and Rob Campbell capture images of the Rappahannock River for the Chesapeake Conservancy on Monday.

The Chesapeake Conservancy has hired Terrain360, which is using its one-of-a-kind vessel equipped with six cameras to capture images along the Rappahannock River.

This computer screen shows images of a rail crossing over the Rappahannock River. Terrain360 cameras capture images at intervals, then stitch them into a digital map.