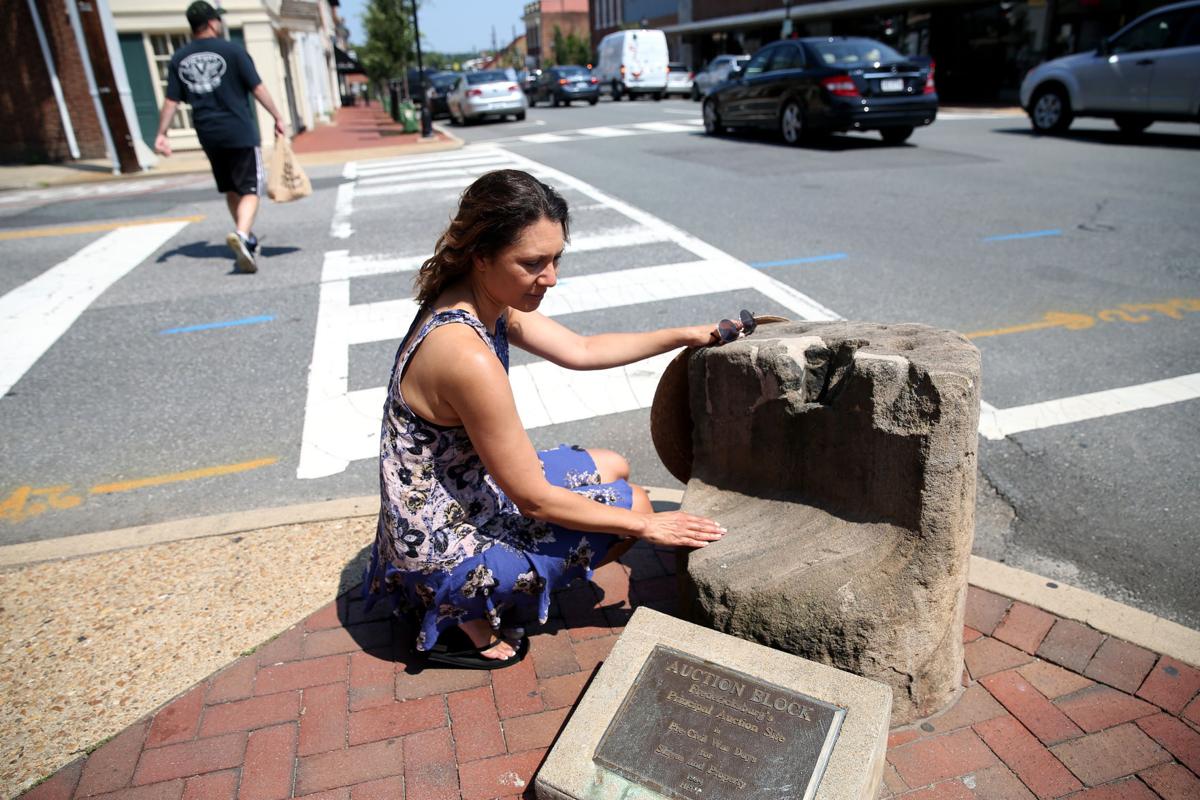 Christina Byer of Torrance, Calif., visits the slave auction block on the corner of Charles and William streets in Fredericksburg on Tuesday. 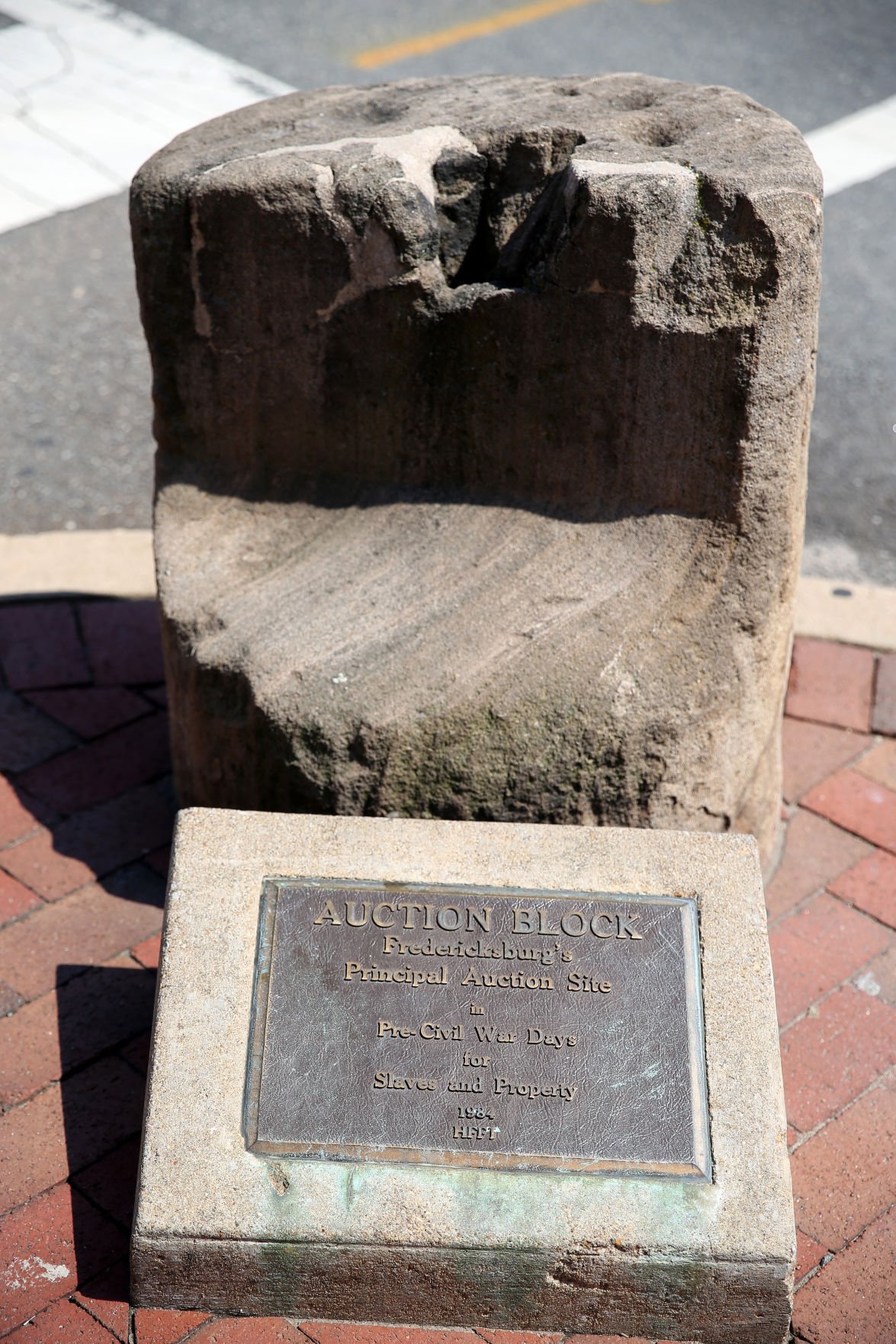 Christina Byer and her husband, Tim Byer of Torrance, California visit the Slave Auction Block on the corner of Charles and William streets in Fredericksburg, Va. on Aug. 22, 2017. 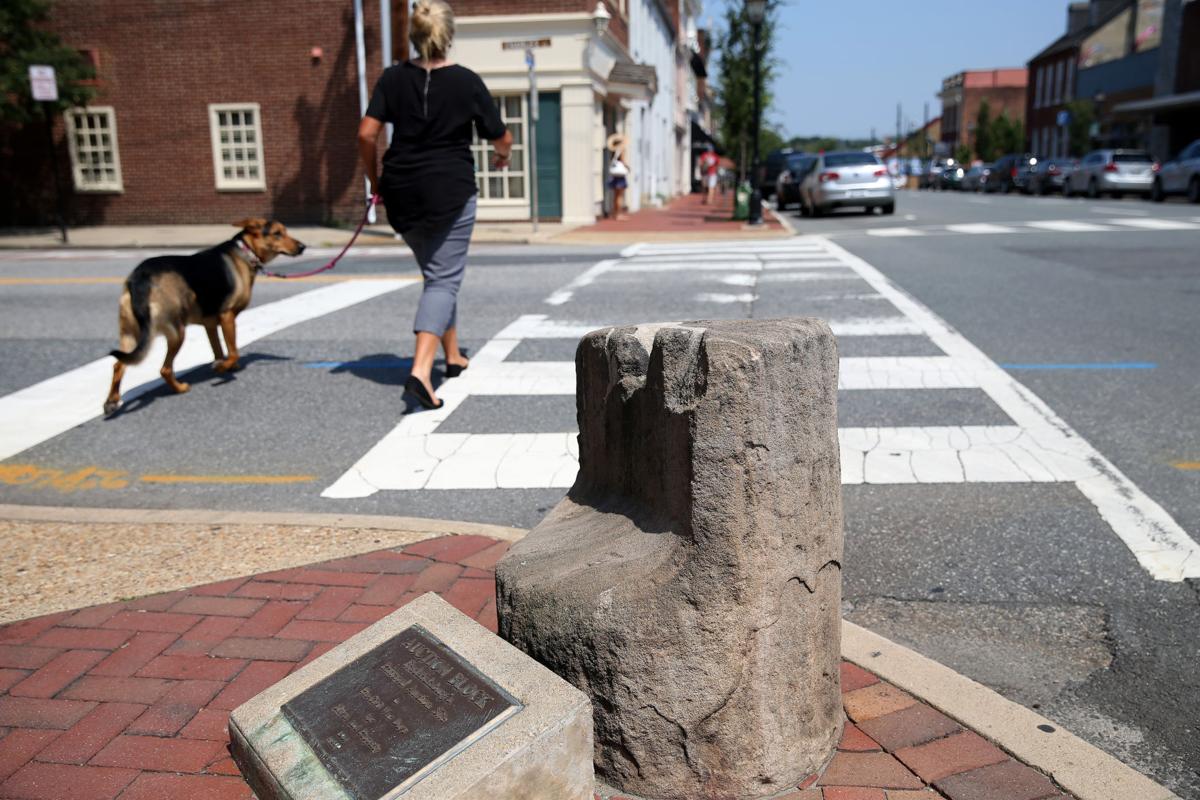 People walk by the Slave Auction Block on the corner of Charles and William streets in Fredericksburg, Va. on Aug. 22, 2017.

Christina Byer of Torrance, Calif., visits the slave auction block on the corner of Charles and William streets in Fredericksburg on Tuesday.

Christina Byer and her husband, Tim Byer of Torrance, California visit the Slave Auction Block on the corner of Charles and William streets in Fredericksburg, Va. on Aug. 22, 2017.

People walk by the Slave Auction Block on the corner of Charles and William streets in Fredericksburg, Va. on Aug. 22, 2017.

Ronnette Cooper can’t walk past the slave auction block in downtown Fredericksburg without wondering if her ancestors had been sold there.

It’s a reminder of part of Fredericksburg’s, and the country’s, past that is painful and racist, she told City Council at its regular meeting Tuesday.

She said that whether it remains at the corner of William and Charles streets or is relocated to a museum, a plaque be placed there. It should say not only that slavery was evil, but that America today stands for the success and liberty of all, regardless of their color.

Cooper, who is on the pastoral team at Awakening Community Church in Massaponax and took part in Sunday night’s prayer rally at the auction block, was one of three people who spoke about the auction block during the public comment section of the meeting.

Clint Van Zandt of Fredericksburg said that John Hennessy, chief historian and chief on interpretation at Fredericksburg and Spotsylvania National Military Park, has researched the auction block’s history and found at least nine different sales of humans that were held directly in front of the building that still stands there. He said one of the sales described them as servants, while another listed “17 valuable slaves” for sale there.

He said that it should be placed in a museum, and a sign posted on the auction block site saying what occurred there and where it can be found.

Faith Childress, who lives at 1508 William St., said that she has friends who won’t walk on William Street because of the auction block, and also asked that it be removed to a museum.

A number of people have been contacting City Council members about the auction block over the past few weeks, and an online petition calling for its removal has been circulating, City Councilman Chuck Frye Jr. said.

City Councilman Matt Kelly thanked Cooper, Childress and Van Zandt for expressing their views calmly, especially at a time when people with opposing views are talking at each other instead of to each other.

Kelly said that he doesn’t disagree that the auction block causes pain and anguish, but that’s not necessarily a bad thing. It helps people understand what humans are capable of doing to other humans and instill in them the desire never to do that again.

City Council member Kerry Devine said that Frye’s proposal would be a first step, and hoped it would be cathartic for Fredericksburg.

She said that she was shocked the first time she saw the auction block, but as a history teacher she thinks that it is important to see it in context, as painful as that might be. She also said that the city could do a better job of telling the horrific story of the auction block better than it does.

“This whole tear it down movement is disturbing to me as a veteran,” said City Council member Brad Ellis. He said that Peggy Noonan made great points in an article she wrote for the Wall Street Journal in which she said that: “When a nation tears its statues down, it is toppling more than brass and marble. It’s toppling itself.”

He said that not everything that made America what it is is good, but people shouldn’t try to hide history. The auction block is tangible and a painful reminder of slavery, “but taking it out of context denies what occurred.”

Councilman Tim Duffy said that he would also hesitate to remove the auction block.

“It’s not a monument. It’s an artifact. We’re obligated to convey, not just to future generations of Americans, but to the world, what we did. It represents a part of slavery that often gets overlooked, that threat of selling families off,” he said.

Like Devine, Duffy said that the auction block’s history doesn’t seem to be well presented. He thanked Frye for asking if he, the mayor and the city manager could meet and bring ideas about how to proceed back to the Council.

Greenlaw pointed out that the auction block serves as the start of a mini-history lesson in three city blocks. “Jubilation,” a sculpture celebrating the 150th anniversary of the Emancipation Proclamation that was designed by a James Monroe High School graduate, sits next to the Fredericksburg Area Museum at William and Princess Anne streets. The next block has signage about Fredericksburg’s role in the Civil Rights movement and a sit-in at the former Woolworth’s across Caroline Street.

Frye said that he’s concerned that the auction block isn’t always treated respectfully. He said that he sat in a car and watched Sunday’s prayer vigil. After it was over, one black man and three whites went over to it and held a mock auction crying “Sold! Sold! Sold!”

He, Greenlaw and Baroody will report back to City Council in September.