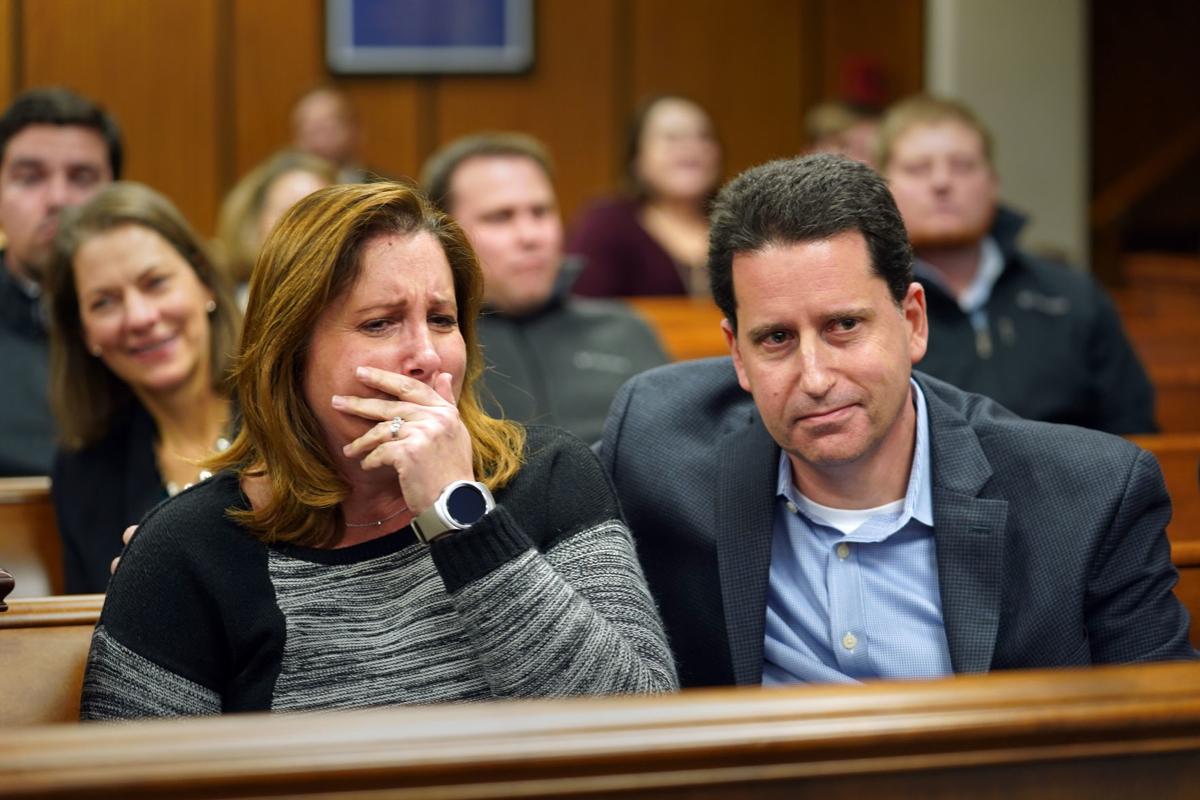 Lani Silber Weiss and her brother, Seth Silber, react to the City Council’s approval of a stadium deal. The Silber family owns the Potomac Nationals. 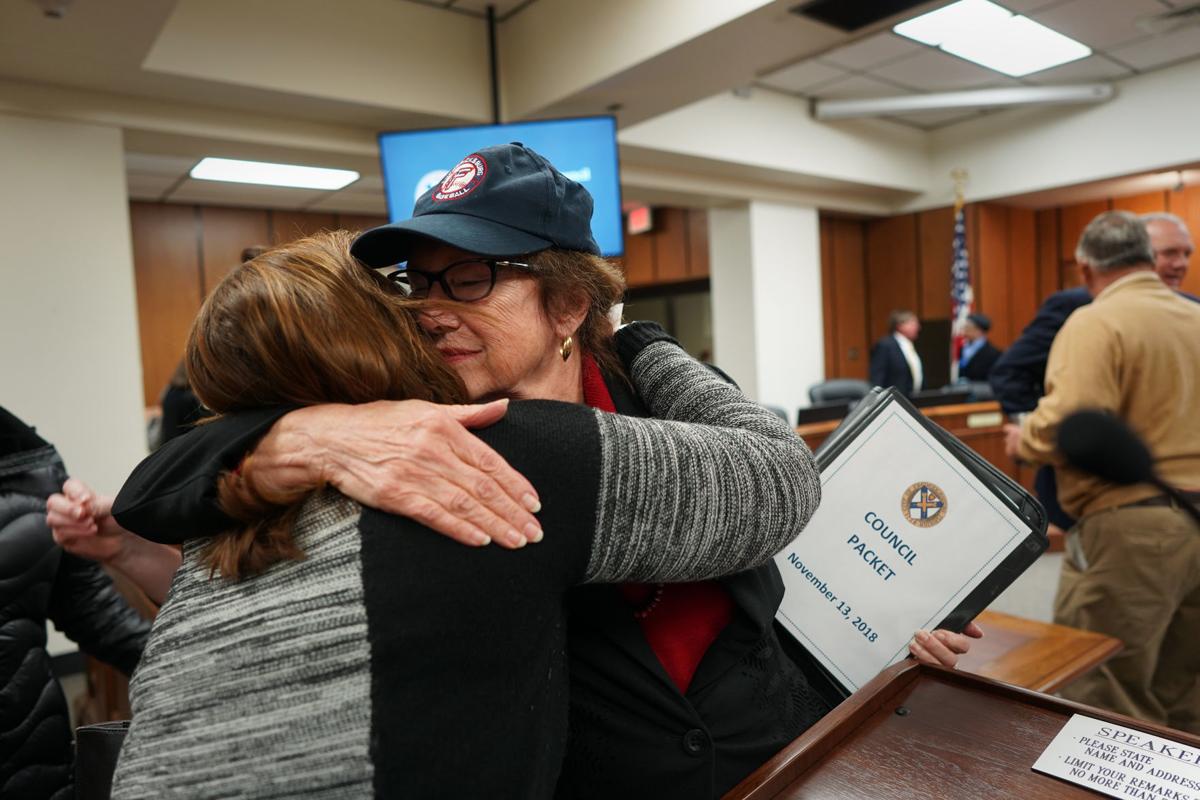 After six years and one unsuccessful attempt, Fredericksburg has finally scored a minor league baseball team of its own.

City Council on Tuesday unanimously approved the development and shared use agreement with Potomac Baseball, LLC for the planned $35 million, multipurpose stadium in Celebrate Virginia South, as well as several related amendments, agreements and ordinances.

He recalled how it began for him when the late Paul Akers, then The Free Lance–Star’s editorial page editor, berated him for Fredericksburg’s lack of a baseball team and stadium as they ate breakfast at the 2400 Diner.

Kelly said that it kicked off “a long, roller coaster road” that included an aborted attempt to bring the Hagerstown Suns to Fredericksburg, and ended with the city striking a better deal with the Silber family, owners of the Potomac Nationals. The agreement calls for them to finance, build and maintain the 5,000-seat stadium.

Fredericksburg will be considered an “anchor tenant” in exchange for an annual payment to the club of $1.05 million for 30 years. The city plans to cover its commitment through proceeds generated by the stadium. This will include an estimated $700,000 in tax revenue based on the two studies done when the city was mulling a stadium deal with the Hagerstown Suns in 2013.

“I truly believe that this will be an amenity to the community that will return to the city tenfold,” Kelly said. “I’m not even talking about revenue, just community building, hopefully working toward diversity as Councilor Frye has brought up, and really, truly bring us together. This has never been an issue for me as a being moneymaker. This is a community amenity that greatly enhances our residents’ quality of life.”

He thanked the Silber family for working with the city on the deal, and said that the stadium will be a legacy project for the council.

“We really did the right thing in moving this project forward,” Kelly said.

“It’s really a game changer for the city of Fredericksburg and the area,” he said.

Council member Billy Withers said that he expects that the city will not only raise the funds for its annual payments through tax revenues from the stadium and other measures, but exceed them.

“I want to especially thank the Silbers for bringing a deal that we can support so we don’t have to go through this again. You know, Matt has been beating on our ears for six years or so. Thank you for bringing a deal to town that we could support so we won’t have to listen to this again,” he said, as the council and the audience burst into laughter.

Mayor Mary Katherine Greenlaw, who’d donned a Fredericksburg Baseball cap for the vote, asked Lani Silber Weiss, who is Art Silber’s daughter and president and the Potomac Nationals’ president and chief operating officer, if she wanted to say a few words.

Weiss got choked up as she thanked everyone for working tirelessly on the deal. “You are all making a dream come true for our family,” she said. “You truly are.”

Art Silber, who was unable to attend due to illness, said in an interview Monday that Minor League Baseball and the Carolina League have also given their approval for his family to move the Class A affiliate of the Washington Nationals to the city after decades of playing at the now-outdated Pfitzner Stadium in Prince William County.

He said that he expects to break ground on the stadium near the Fredericksburg Expo & Conference Center next month, and have it finished and ready to play ball by April 1, 2020.

Silber added that the team will change its name from Potomac Nationals to one that includes Fredericksburg and possibly Nationals since this is “overwhelmingly a Washington Nationals town.” The quandary is figuring out a new mascot that kids will find cute, but won’t embarrass adults. The P–Nats’ mascot is Uncle Slam, a baseball riff on Uncle Sam.

Other stadium-related issues finalized at Tuesday’s meeting included amending the comprehensive plan and approving a special use permit to allow a stadium in Celebrate Virginia South. The comp plan changes were needed to reflect the deal being negotiated between the city and the Silber family.

It gives the city exclusive use of the stadium for up to 183 days each calendar year for such things as high school, college and amateur athletics, as well as concerts and other major events. In addition, City Council approved an agreement negotiated with the Celebrate Virginia South’s owners association for a $105,000 annual payment to the city for 30 years in exchange for marketing exposure at the stadium and throughout the city.

The Silbers, in turn, are expected to take advantage of a new property assessed clean energy financing program, which the city agreed to explore when it signed a Letter of Intent with Potomac Baseball, LLC, on July 11. Council members approved Commercial Property Assessed Clean Energy Financing, or C–PACE as the program is called, Tuesday.

It gives developers and landlords the opportunity to obtain a bank loan for such things as solar facilities, Energy Star-rated heating and air conditioning systems, LED lights and WaterSense-certified products. C–PACE loans will be secured by a special assessment lien and repaid through special real estate tax assessments. The cost will be offset by savings to the borrower’s energy bills.

Virginia began the process to allow localities to create the programs in 2015. So far, Arlington County is the only Virginia locality that has adopted a C–PACE ordinance. Similar programs are in the works in both Loudoun and Fairfax counties.

City Council also voted to vacate a right-of-way and realign an undeveloped portion of Carl D. Silver Parkway so that it will curve around the stadium. The general development plan had shown a future extension of the parkway that would extend through the middle of the stadium property. The proposed realignment will enable a future intersection with Gordon W. Shelton Boulevard.

Council members deferred action on two resolutions about the deal until its Nov. 27 meeting. Staff is still working on a trademark licensing agreement and a paid admissions events agreement for revenue producing events at the stadium.

COVID variant cited in at least one death in Fredericksburg region

The U.K. strain has caused 30 of the Fredericksburg health district’s 34 infections from variants. Other strains found locally originated in South Africa and California.

Lani Silber Weiss and her brother, Seth Silber, react to the City Council’s approval of a stadium deal. The Silber family owns the Potomac Nationals.