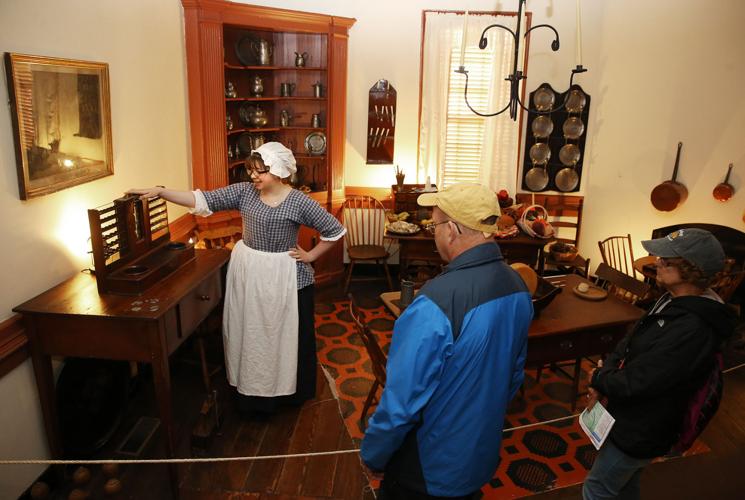 Ruth Whittemore leads Myrtle Beach, S.C., residents Keith and Mary Ann Gustafson on a tour of the Rising Sun Tavern in Fredericksburg on Monday. The tavern will hold its ghostly John Frazer Night on Saturday. Frazer died there in 1793. 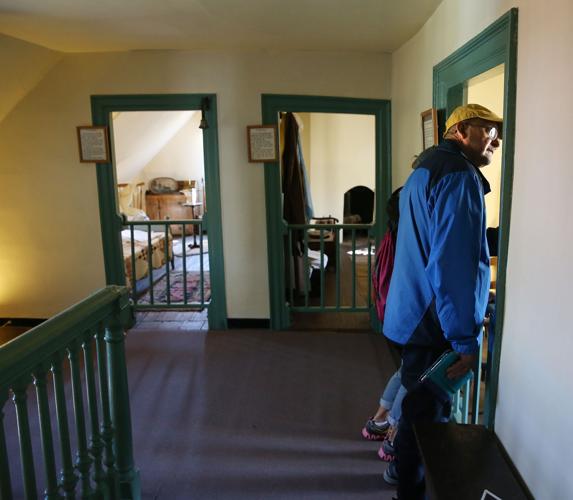 Visitor Keith Gustafson peers into the tavern keeper’s storeroom while touring the Rising Sun Tavern recently. The tavern is said to go ‘bump in the night.’

The operator of what is known today as the historic Rising Sun Tavern in downtown Fredericksburg died there on Nov. 28, 1793.

How else to explain the stories told by guides who work there today, dressed in 18th-century garb: of plugs mysteriously being pulled out of sockets, postcards flying off a rack for no apparent reason, and tricorn hats that had been stacked neatly on a shelf at closing time appearing on the floor the following morning?

“I hate to say it’s like ‘bump in the night,’ but that’s the way it is around here sometimes,” said Katie King, the site’s manager.

The public will get a chance to hear some of those tales, along with surprising findings by Culpeper Paranormal Investigations, when the Rising Sun Tavern holds “spirited” half-hour candlelight tours from 6 to 8:30 p.m. on Saturday, November 4, 2017.

John Frazer Night, as the popular event is called, will include some history about Frazer, a tour of the tavern at 1304 Caroline St. and a chance to hear questions the paranormal investigators asked of its ghostly inhabitants—and their barely audible answers.

Frazer had served as an officer in the Continental Army during the American Revolution before he and his wife, Elizabeth Fox Frazer, began running what was then called the Eagle Tavern in 1792. If the name Frazer has a familiar ring, it’s the same Scottish Highland clan of the fictional Jamie Fraser in the popular Starz TV series “Outlander.”

In fact, John Frazer’s grandfather, William Frazer, was a descendant of Clan Fraser of Lovat, and emigrated from Scotland to Virginia. He’s known to have been living in the Fredericksburg area by 1727. William Frazer died young, and his only son, James Frazer, was a tobacco planter in Spotsylvania County. He was wealthy enough to send John Frazer to The College of William & Mary.

King said she’s always wondered how a man with Frazer’s level of education ended up running a tavern in what had been built as the home for Charles Washington, George Washington’s youngest brother. The Wallace family purchased it in 1792, and it operated as a tavern, stagecoach stop and Fredericksburg’s post office for the next 35 years.

Whatever Frazer’s reason for becoming its first tavern keeper, he apparently had a playful nature that time has not diminished.

There’s the story of the tavern guide who decided his ghost was having great fun unplugging the lights in an upstairs room, and was getting tired of plugging them back in. She finally cried out, “Come on now, stop it!”

John did, but not without playing one more trick. He pulled the rug out from under her as she was leaving the room.

King recounted another incident where two guides working at the Rising Sun Tavern one day were startled to see postcards come flying out of the rack in the gift shop area for no apparent reason.

“They locked up and one never came back,” she said.

There have also been incidents where other gift shop items, such as tricorn hats, were stacked neatly at the end of the day, only to be found somewhere else in the morning. No reasonable explanation for the disturbance could be found, King said.

Frazer’s ghost is thought to be especially active around the time of his death and the holidays, and staff talks to him more when he gets especially rambunctious.

“That seems to placate him,” King said. “He seems to behave himself more.”

The Rising Sun Tavern’s ghostly stories have been written up numerous times, and it’s often mentioned at or near the top of the list of the state’s creepiest attractions. Culpeper Paranormal Investigations asked if it could investigate back in January, and was intrigued enough to return in August.

Armed with voice-activated recorders and other devices, the team went from room to room asking such questions as “What’s your name?” and “Do you like having visitors?”

They were hoping for Electronic Voice Phenomena, or EVPs, in response. The sounds they picked up were gravely and typically indistinct. But there were a few exceptions and some surprises.

Explanations for EVP include perceiving patterns in random information. Yet when the ghost busters asked repeatedly, “Do you like having visitors?” in the tavern’s common room, the answer on a CD of the recording that King played on a recent afternoon sounded like a definite “No!”

“That’s the worst-case scenario for me: an angry ghost,” said King.

She said the common room is where the poorer sort would stay. Fifteen men at a time would pay a penny apiece to share the space, and they’d sleep on the floor. Having visitors probably wouldn’t have been appealing, even if you were a ghost.

Kimberly Lillard, Culpeper Paranormal’s founder, said the highlight of the investigation was when team member Jayne Ramirez asked, “Can you please tell us your name?” The response they heard were four syllables that sounded like “Elizabeth,” which unbeknownst to them at the time was the name of Frazer’s wife.

“We were able to find that out without Katie telling us,” Lillard said. “That made us want to return there to do more research.”

Elizabeth Frazer ran the tavern after her husband’s death.

“Elizabeth didn’t die here,” said King. “I find it interesting that she’s back.”

King said getting to tag along with the Culpeper Paranormal team after hours at the tavern was easily one of the most amazing things she’s ever done.

“We’ve talked about having other paranormal investigators to see if they get anything different,” she said.

Tickets for John Frazer Night are $10 for the public and $8 for Washington Heritage Museums members. To reserve a tour, email RST@WashingtonHeritageMuseums.org or phone 540/371-1494.

Ruth Whittemore leads Myrtle Beach, S.C., residents Keith and Mary Ann Gustafson on a tour of the Rising Sun Tavern in Fredericksburg on Monday. The tavern will hold its ghostly John Frazer Night on Saturday. Frazer died there in 1793.

Visitor Keith Gustafson peers into the tavern keeper’s storeroom while touring the Rising Sun Tavern recently. The tavern is said to go ‘bump in the night.’