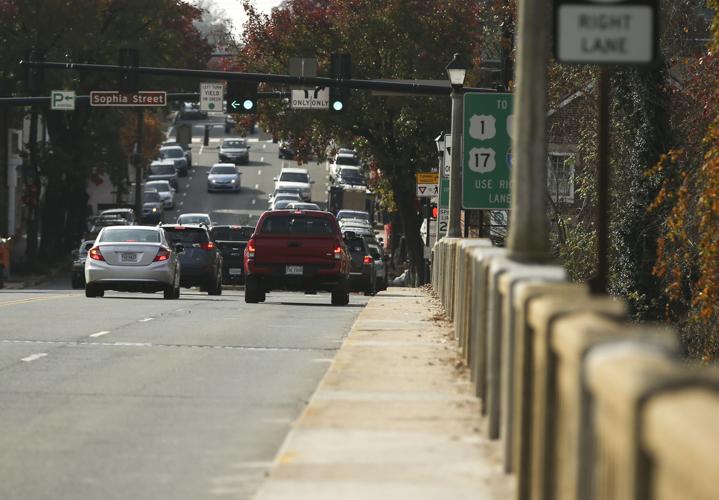 Traffic moves across the Chatham Bridge on Wednesday. The span, which connects downtown Fredericksburg and the Ferry Farm area of Stafford, is considered to be structurally deficient. Planned repairs include a larger pedestrian walkway. 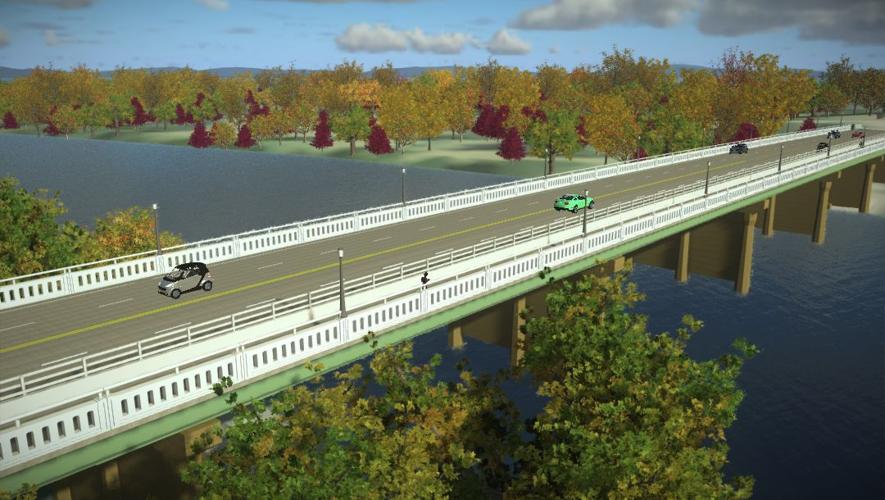 This computer-generated rendering shows how the Chatham Bridge will look once work is completed. 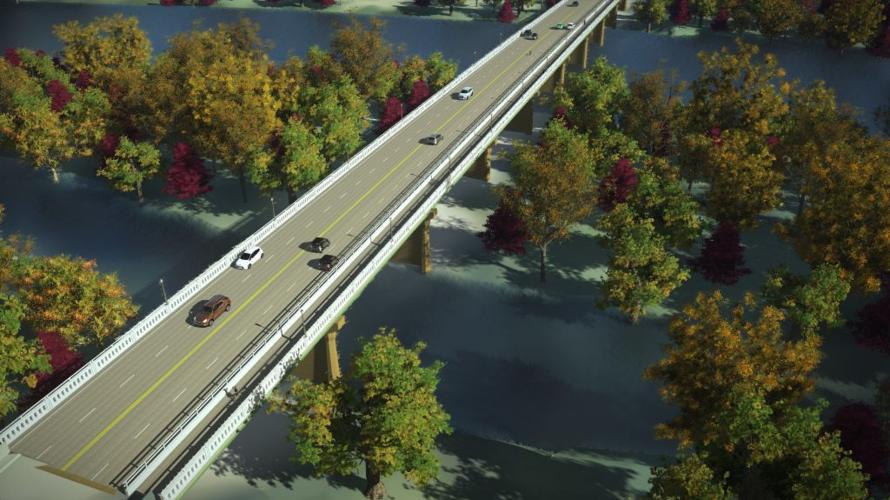 This rendering shows the pedestrian and bike lane. An overlook will be added. 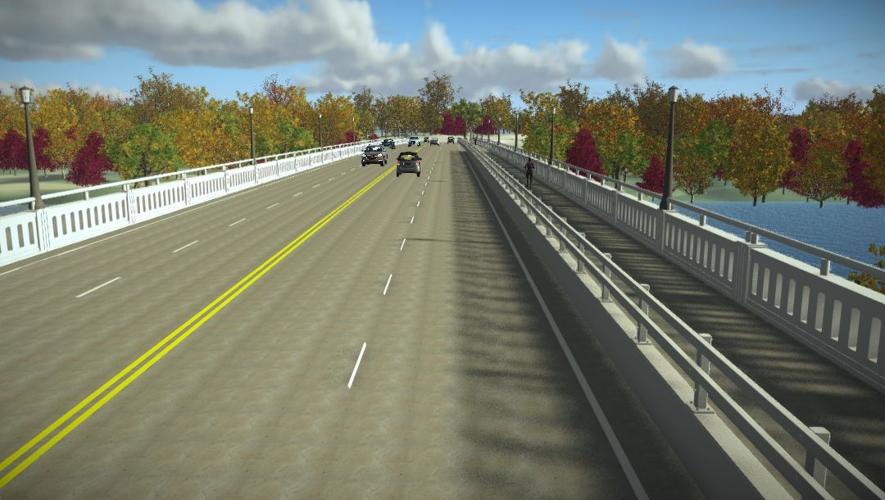 This rendering shows how the rehabbed bridge will look.

Drivers crossing the Chatham Bridge often worry when it shakes or wonder if a new hole will open in the pavement and swallow their tires.

The Virginia Department of Transportation considers the 76-year-old structure structurally deficient, and is proposing two options for rehabilitating it.

One would close the bridge for 16 to 19 months after improving the Dixon Street ramp, which would be part of the official detour. The other option would be to partially close it while work is being done, which would take longer, cost more and create traffic backups.

“My recommendation to you this evening is going to be full closure,” Michelle Shropshire, VDOT’s assistant district administrator for preliminary engineering, told City Council during its work session Tuesday.

VDOT, which owns the bridge jointly with the city, will also make a presentation to Stafford County supervisors Nov. 21, and hold a public hearing next year. The project is expected to cost around $20 million, and will be advertised for construction in fall 2020.

The Chatham Bridge was built in 1940–41 as a replacement for its predecessor, which was washed out in a 1937 flood. Nearly 16,000 vehicles use its four lanes each day to cross the Rappahannock River, according to a 2015 traffic count. It also has a 4-foot-wide sidewalk for pedestrians on each side.

VDOT proposes widening the bridge from 50 feet to a little more than 57 feet—an additional 3 feet and 7 inches per side, removing the narrow sidewalks, and adding an 8-foot-wide, shared-use path for pedestrians and bicyclists on the downstream side. The existing sidewalks don’t meet Americans With Disabilities Act standards, and aren’t bicycle friendly—bicyclists are expected to share traffic lanes with vehicles.

The new path will be separated from vehicular traffic by a concrete wall topped with a metal railing. It will connect with the sidewalk next to the Old Stone Warehouse on the city side. On the Stafford end, it will link to the Belmont–Ferry Farm Trail, which, when completed, will pass under the bridge. Outer railings on either side of the bridge will be similar to the existing Gothic-style railings, Shropshire said.

The bridge’s superstructure will be rehabbed on the existing piers.

VDOT’s preferred option would close the bridge at Sophia Street in Fredericksburg and River Road in Stafford. A study found that 60 percent of vehicles would use a signed detour that directed drivers to take the ramp from Dixon Street to the Blue and Gray Parkway to cross the Rappahannock. The other 40 percent would use the Falmouth Bridge instead. If this option is selected, VDOT will add a lane to the Dixon Street ramp and adjust the timing of signal lights along the detour route and the U.S. 1 corridor to improve traffic flow, Shropshire said.

Accommodations for pedestrians will have to be made, as well, since they won’t be allowed to cross during construction.

This option will save a total of nearly $3.5 million, including $2 million for the construction and $1 million to relocate utilities. Other savings would be based on the shorter construction time, while improvements along the detour are expected to cost $172,000, she said.

It also would give the contractor greater flexibility, be safer for those working on the project and reduce long-term maintenance costs because temporary barriers wouldn’t have to be anchored to the bridge, and there would be no need for a longitudinal joint where the center lanes meet, Shropshire said.

A partial closing of the bridge would be done in two phases, each of which would take 15 months. One lane would usually be open in each direction, although the bridge would still need to be fully closed during some points in construction, she said. In the first phase, left turns onto Sophia Street would be prohibited.

In the second phase, they could only be made onto Sophia. Trucks and larger vehicles would still have to detour around the bridge.

Whichever option is settled on, the bridge will get new lights similar to the lampposts in downtown Fredericksburg, Shropshire said.

Traffic moves across the Chatham Bridge on Wednesday. The span, which connects downtown Fredericksburg and the Ferry Farm area of Stafford, is considered to be structurally deficient. Planned repairs include a larger pedestrian walkway.

This computer-generated rendering shows how the Chatham Bridge will look once work is completed.

This rendering shows the pedestrian and bike lane. An overlook will be added.

This rendering shows how the rehabbed bridge will look.