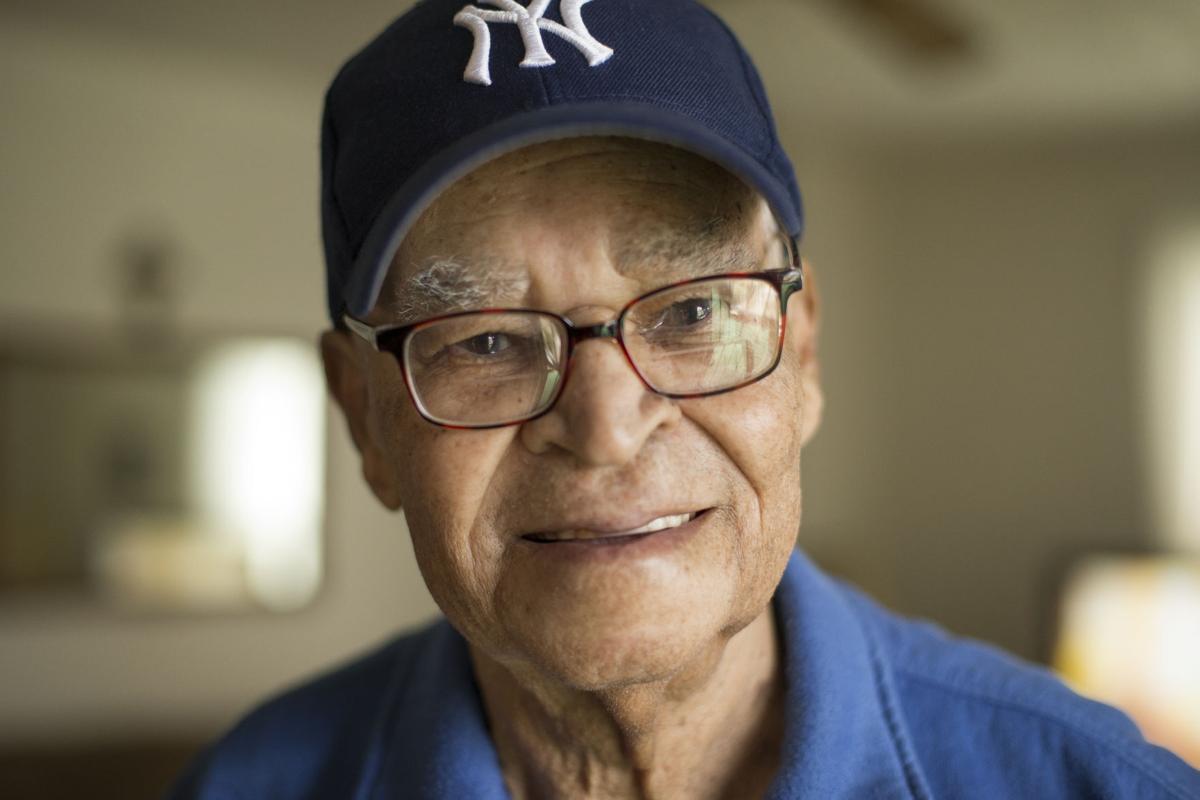 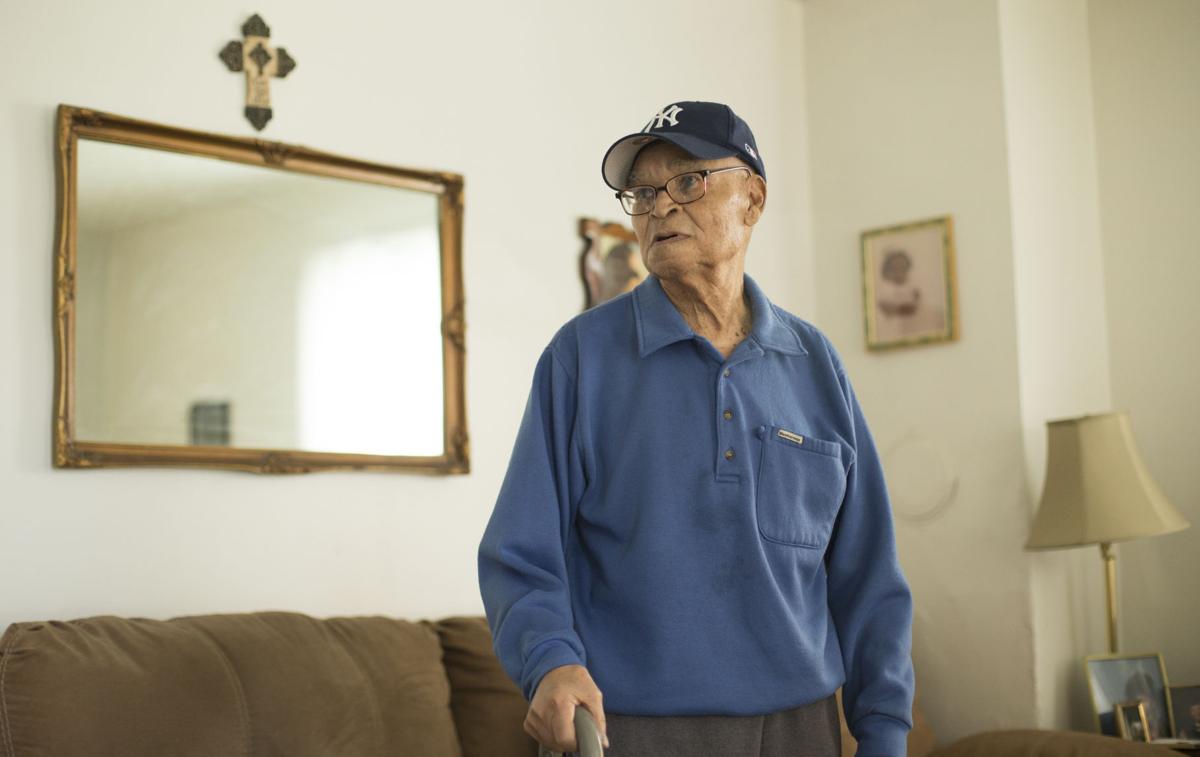 Dick Mercer, photographed on April 9, 2018, a day after his 100th birthday. He was he patriarch of a family that played a key role in promoting civil rights. 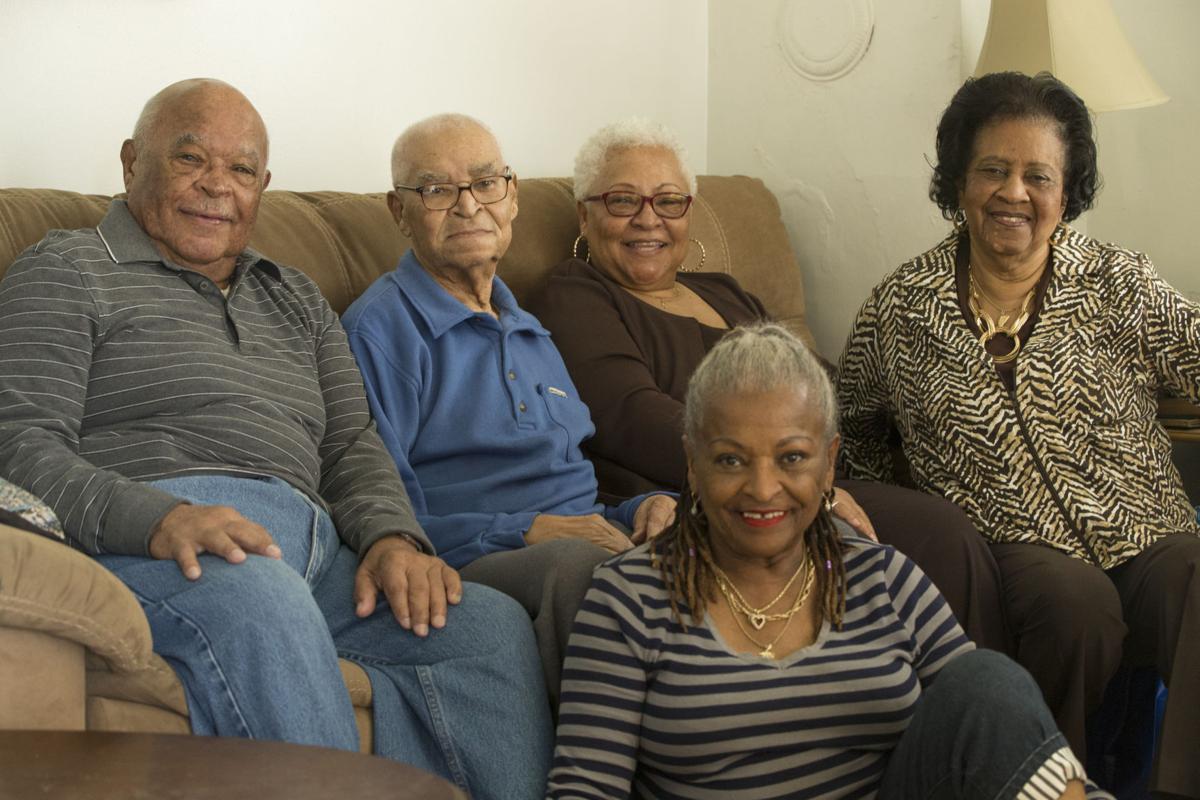 He sought spiritual guidance from watching church online when his body no longer permitted him to be there in person. When his granddaughter filmed some of his final days for social media, his voice had faded, but his words of encouragement remained profound.

“I used to pray that my daddy would die peacefully, that he wouldn’t have any bedsores, any temperature or any pneumonia,” said his daughter, Jerine Mercer McConnell. “Don’t you know my prayers were answered? He weighed 67, 68 pounds, but he was oriented times four. His mind stayed intact.”

He was active at Shiloh Baptist Church (New Site) and other civic organizations, and was a pillar of the Fredericksburg community throughout his life. But he may have been proudest of his role as patriarch of a family that played a key role in promoting civil rights and fairness in the city.

McConnell participated in the 1960 sit-in at Goolrick’s Pharmacy in Fredericksburg to protest segregated lunch counters throughout the South.

Mercer’s late son, O’Neal Mercer, was recently added to the city’s Wall of Honor. He helped lead the fight for free bus service for all the city’s children to Hugh Mercer Elementary School. He also pushed for decades to build what is now the Doris E. Buffett Pool in Dixon Park so all residents would have a place to swim in addition to a litany of other accomplishments.

“Of course, everybody thinks their father or their parents are the greatest, but my dad was an awesome dad,” said his daughter, Beverly Lawson. “The things he taught us I try to remember, live by and teach my children. He said the most important thing is your name. You have to protect it. If you blemish your name, it can affect your life.”

McConnell said the family’s ability to peacefully make strides when it comes to injustice stems from their upbringing.

“My dad was a fair man. He didn’t believe in violence,” McConnell said. “He believed in talking things out and trying to see the other person’s side of it … He believed that if you treat people fairly, kept your word and kept your name clean, people would more than likely return the same.”

Mercer was born on a Caroline County farm on April 8, 1918, but spent the majority of his life on Glover Street in Fredericksburg’s Mayfield neighborhood. His family described him as a frugal but sharply dressed man who looked out for others without expecting anything in return.

Fredericksburg blues musician and activist Gaye Todd Adegbalola said Mercer was “the ultimate role model” for young Black men and a “natural born leader.” She noted that he was a great provider for his family and he owned his own home at a time when few Black people were as fortunate.

“He was independent,” Adegbalola said. “He was a lover of nature with all his gardening. He was always stylish, neat as a pen, with a sharp shave and haircut. Even in his later years, quite handsome. He was quick to laugh and had a perpetual twinkle in his eye.”

Mercer was a member of American Legion Post 142—an all-Black organization that later integrated with Post 55. But he and a few others remained with Post 142 after the merger out of a sense of loyalty.

He was also a member of the Mayfield Civic Association since its inception. He was known as the “Keeper of the Key” for the MCA building that sits across the street from his house.

The Young Expressions dance group uses the building for rehearsals and other organizations hold meetings there. Young Expressions sent a letter of condolence to the Mercer family stating that he always left the key in his mailbox so they were never locked out. The group said he often provided treats, eating utensils and allowed them to use his home phone when their cellphone batteries were exhausted.

Trudy Smith, president of the Mayfield Civic Association, said Mercer was unhappy if the key wasn’t returned on time.

“He took it personally when the key was missing,” Smith recalled. “Of course, he took responsibility because he was the Keeper of the Key.”

Mercer attended school through just sixth grade in Caroline County, but his family said he was “one of the wisest men ever.”

He joined the Army and was active in World War II. He was one of the first Black military policemen. He retired from the Sylvania Plant in Fredericksburg and later worked for and retired a second time from Fruit Growers Corp. in Alexandria as a forklift operator.

He was a landscaper for many of the homes on upper Caroline Street in downtown Fredericksburg. On his 100th birthday, he received a call from Fredericksburg Mayor Mary Katherine Greenlaw.

He was overjoyed hearing from Greenlaw personally because he faithfully watched every City Council meeting on television.

“He didn’t know I was going to call and we had the most wonderful conversation,” Greenlaw said. “He was the most delightful gentleman. That was such a privilege.”

Greenlaw has lived in Fredericksburg all her life and Mercer moved there with his late wife, Margaret Childs Mercer, in 1937. So Greenlaw said the conversation centered on all the changes each of them have witnessed in the city over the years.

Greenlaw also attended the drive-thru celebration of Mercer’s 102nd birthday that was postponed to last July from April because of the COVID-19 pandemic. The mayor plans to make a statement recognizing Mercer at the City Council meeting Tuesday, Jan. 12.

Dick Mercer, photographed on April 9, 2018, a day after his 100th birthday. He was he patriarch of a family that played a key role in promoting civil rights.