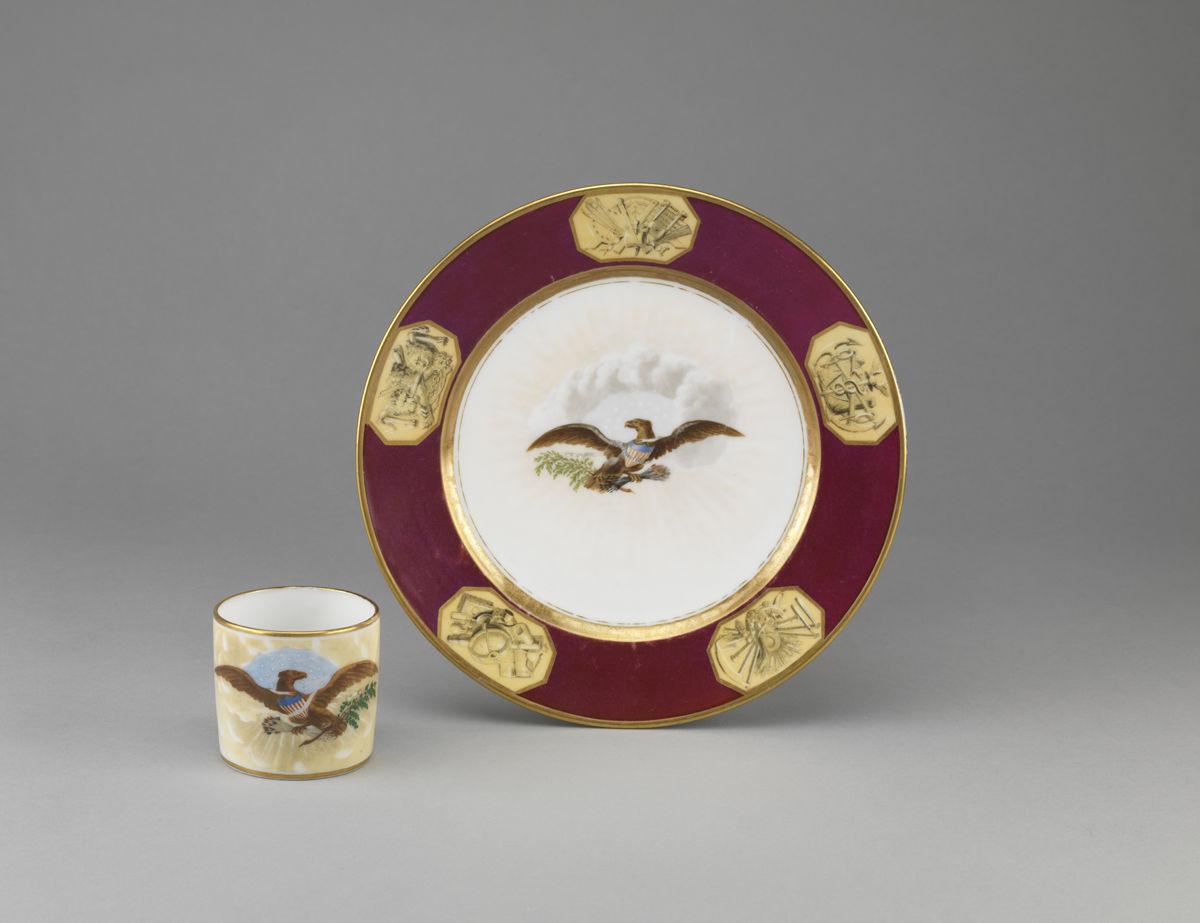 James Monroe ordered these dessert dishes from a Paris firm, part of the first official china service made for a U.S. president for the White House. 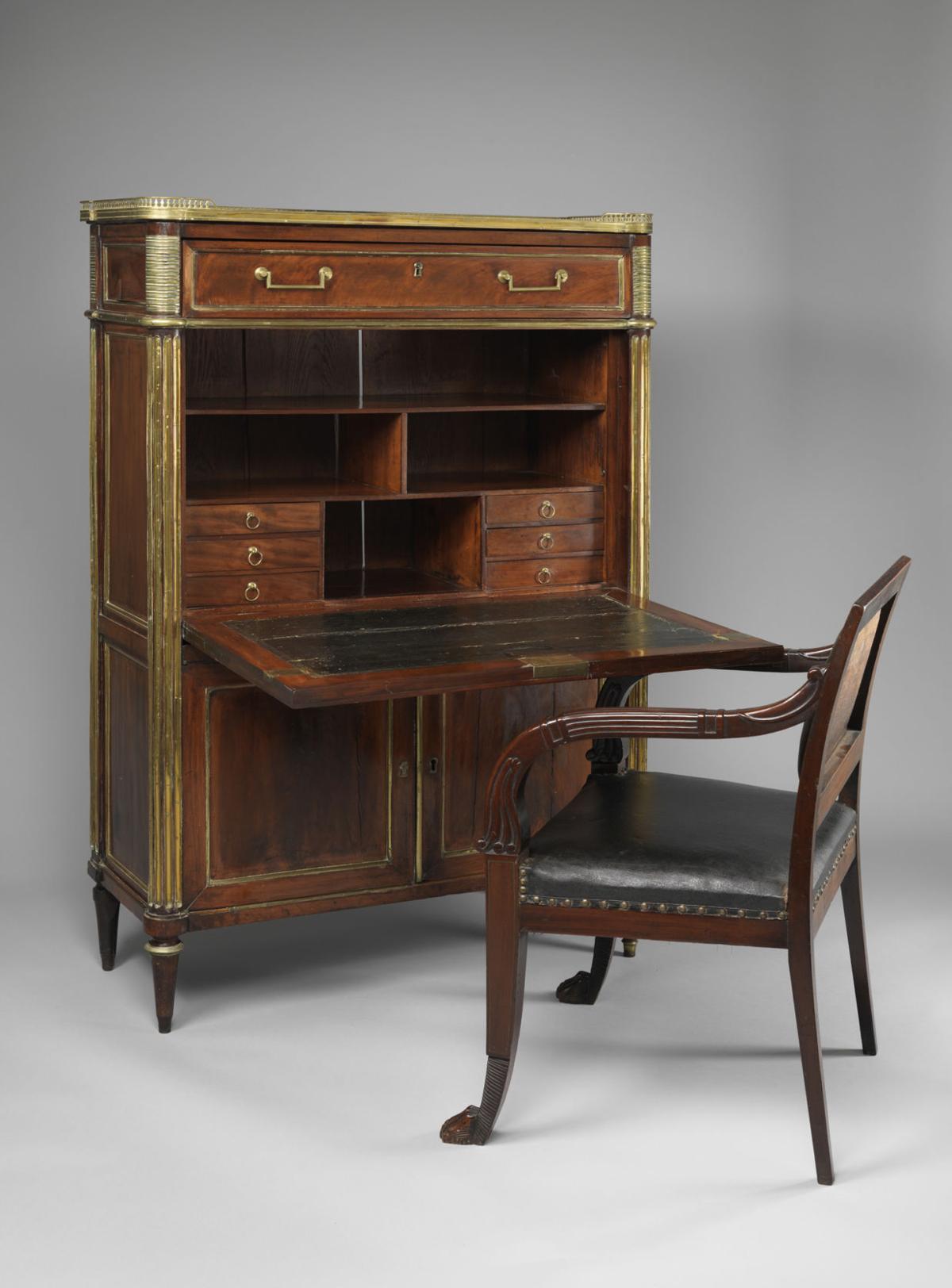 Family lore says President Monroe sat at this desk while he wrote the Monroe Doctrine in 1823. 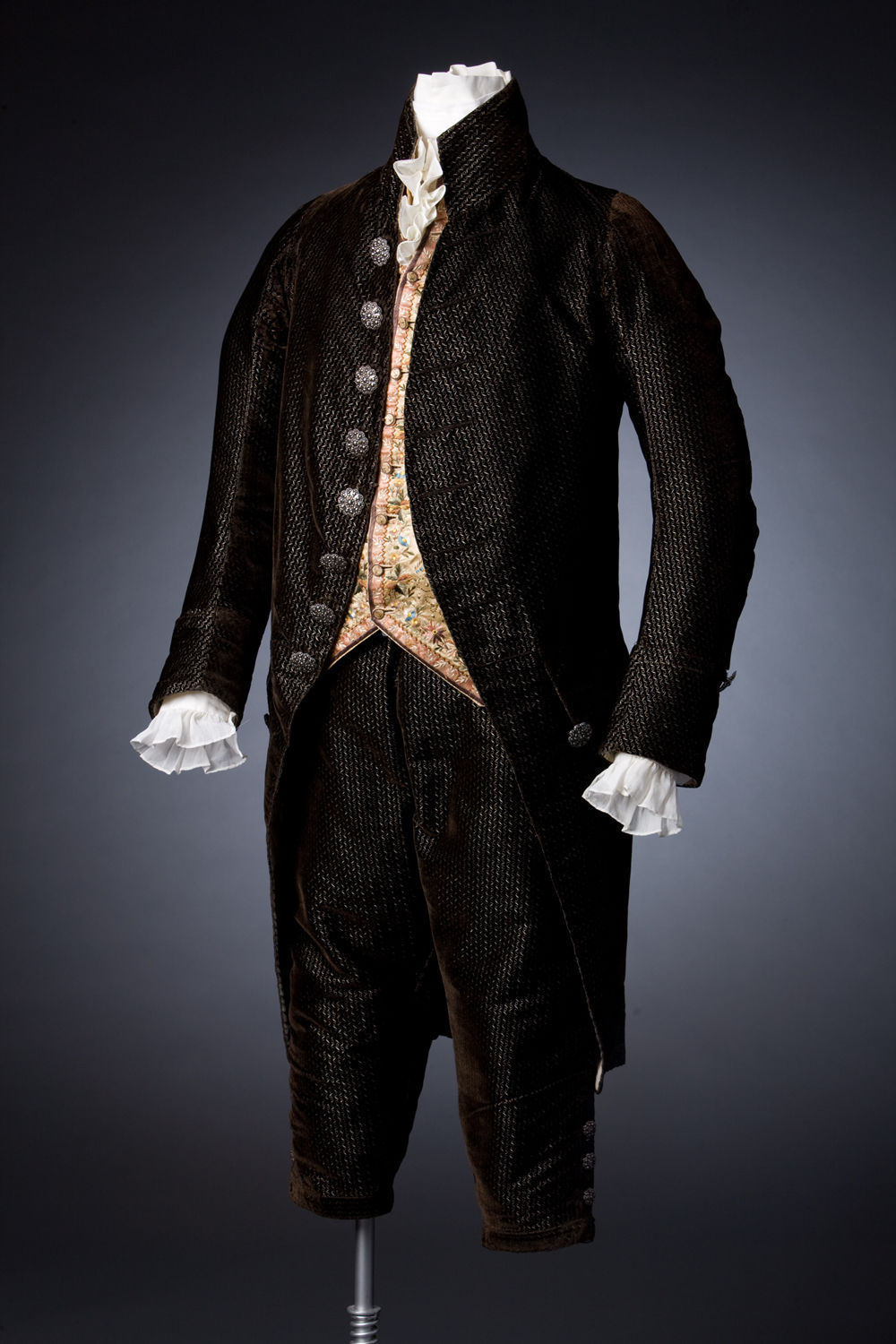 Monroe dressed elegantly while a U.S. diplomat. He and his wife, Elizabeth, attended the coronation of French emperor Napoleon Bonaparte in 1804. 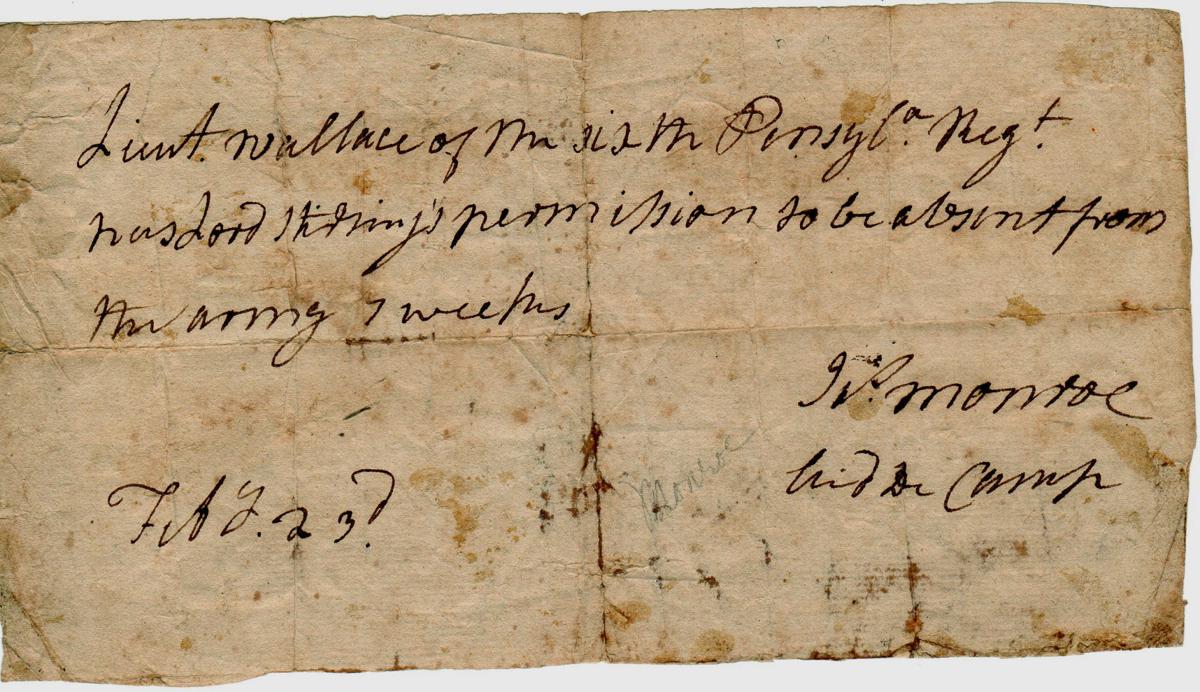 Maj. James Monroe wrote this furlough for a fellow officer while the Continental Army was camped at Valley Forge, Pa., during the American Revolution. It is Monroe’s earliest known signature on an official document. 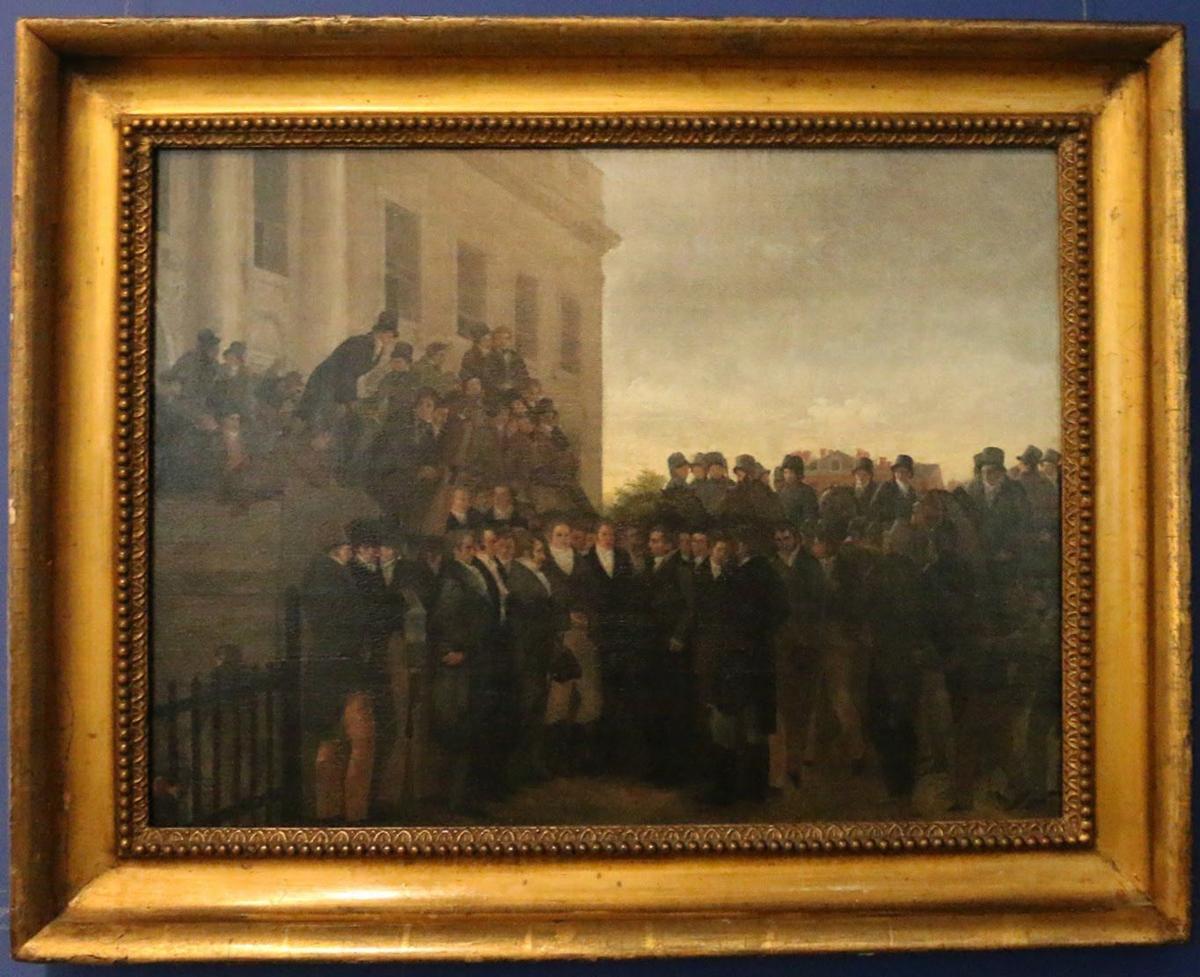 Pietro Bonanni painted Monroe’s welcome back to Washington after his first regional tour as president in 1817. It sparked the ‘Era of Good Feelings.’

By CLINT SCHEMMER THE FREE LANCE–STAR

Google is training its spotlight on the nation’s fifth president, who once called Fredericksburg home.

It happened just in time for Presidents Day, as part of Google’s American Democracy venture—g.co/americandemocracy—which celebrates the U.S. presidency’s history and helps people “discover defining moments in American democracy.” The site covers presidents from George Washington to the present day.

The Monroe Museum’s digital exhibit introduces the man who held more public-service jobs before becoming president than any other holder of America’s highest office.

A native of Westmoreland County in Virginia’s Northern Neck, Monroe fought in the Revolutionary War and was wounded attacking the British garrison in Trenton, N.J., during George Washington’s surprise raid of Christmas Day 1776.

Monroe went on to hold state and federal legislative offices; serve four terms as governor; represent his country as a diplomat posted to Great Britain, Spain and France; and serve (at the same time) as U.S. secretary of state and secretary of war. In France, he helped negotiate the Louisiana Purchase, which vastly enlarged the United States and opened the West to American settlement.

While the nation’s fifth president, from 1817 to 1825, Monroe signed the Missouri Compromise of 1820, a milestone in the sectional controversy over slavery; granted diplomatic recognition to emerging Latin American republics; bought Florida from Spain; and committed the United States to preventing European intervention in the affairs of the Western Hemisphere. His declaration, later named the Monroe Doctrine, was a cornerstone of American foreign policy well into the 20th century.

Via the partnership between the Google Cultural Institute and the museum, people all over the globe can peruse more than significant 70 artifacts from Monroe’s life and times—and that of his wife, Elizabeth—from the museum’s collection. Visitors will discover interactive stories curated by its experts.

The museum’s Bowley Scholar interns, Jackie Downes and Kelly Haynes, uploaded images of the artifacts and created exhibit labels, with technical support from Google staff. Its curator, Jarod Kearney, and director, Scott Harris, proofed the material before it was submitted to Google.

“This was another great learning opportunity for our interns, another cool thing to put on their resumes,” Harris said in an interview.

“Plus, the museum’s content is now on a worldwide platform that has great branding—the Google name,” he added. “That ain’t bad.”

Museum staff said some of the online exhibition’s most important items are:

The museum in Fredericksburg’s historic district holds the country’s largest collection of artifacts and documents related to the fifth president. It was opened in 1927 by Monroe descendants as a place to house their personal collections, which had been handed down through generations of the family.

“We are grateful to Google Arts & Culture for the opportunity bring the distinguished legacy of James Monroe to a worldwide audience, and for their generous technical and marketing support,” Harris said.

The other online exhibit, “Discovering the Home of President James Monroe,” focuses on the research in archaeology and architectural history at the Albemarle County site and includes more than 50 images from James Monroe’s home there.

“We are proud to be able to share our most exciting discoveries with the online community,” Highland Executive Director Sara Bon–Harper said. “The inclusion of James Monroe’s Highland in the Presidents’ Day Collection is even more relevant this year as we celebrate the bicentennial of James Monroe’s inauguration as the fifth president of the United States.”

Launched in 2011, the Google Culture Institute makes important cultural material accessible to everyone, aiming to digitally preserve it and educate and inspire future generations. It includes photos, videos and documents from hundreds of partner institutions in dozens of countries, and features many world heritage sites in its World Wonders Project.

Harris said the Google exposure is also timely for other reasons.

Nationally, commemoration of the 200th anniversary of Monroe’s presidency is getting underway in various communities, museums and historic sites. Elected in November 1816, Monroe took the oath of office for his first term on March 4, 1817.

Locally, Harris has found some parallels between the fifth U.S. president and the 10th president of the museum’s parent, the University of Mary Washington.

At this point in the careers, both Monroe and UMW President Troy Paino were “on the cusp of their presidencies, looking forward to the path of leadership before them,” he said.

Both men saw a strong link between education, citizenship and democracy.

“Nothing is more interesting to my own mind, & nothing can be more important to our common country, than the cultivation of science & liberal literature,” Monroe wrote John Kirkland on July 12, 1817. “The principal support of a free government is to be derived from the sound morals & intelligence of the people; and the more extensive the means of education, the more confidently may we rely upon the preservation of our public liberties.”

Paino, speaking to a UMW assembly on Jan. 19, said: “Our liberal arts education has to be relevant, because we are here to serve, and our fundamental purpose is the preservation and advancement of our representative democracy. And we’re at a time in our history when they need us more than ever.”

James Monroe ordered these dessert dishes from a Paris firm, part of the first official china service made for a U.S. president for the White House.

Family lore says President Monroe sat at this desk while he wrote the Monroe Doctrine in 1823.

Monroe dressed elegantly while a U.S. diplomat. He and his wife, Elizabeth, attended the coronation of French emperor Napoleon Bonaparte in 1804.

Maj. James Monroe wrote this furlough for a fellow officer while the Continental Army was camped at Valley Forge, Pa., during the American Revolution. It is Monroe’s earliest known signature on an official document.

Pietro Bonanni painted Monroe’s welcome back to Washington after his first regional tour as president in 1817. It sparked the ‘Era of Good Feelings.’