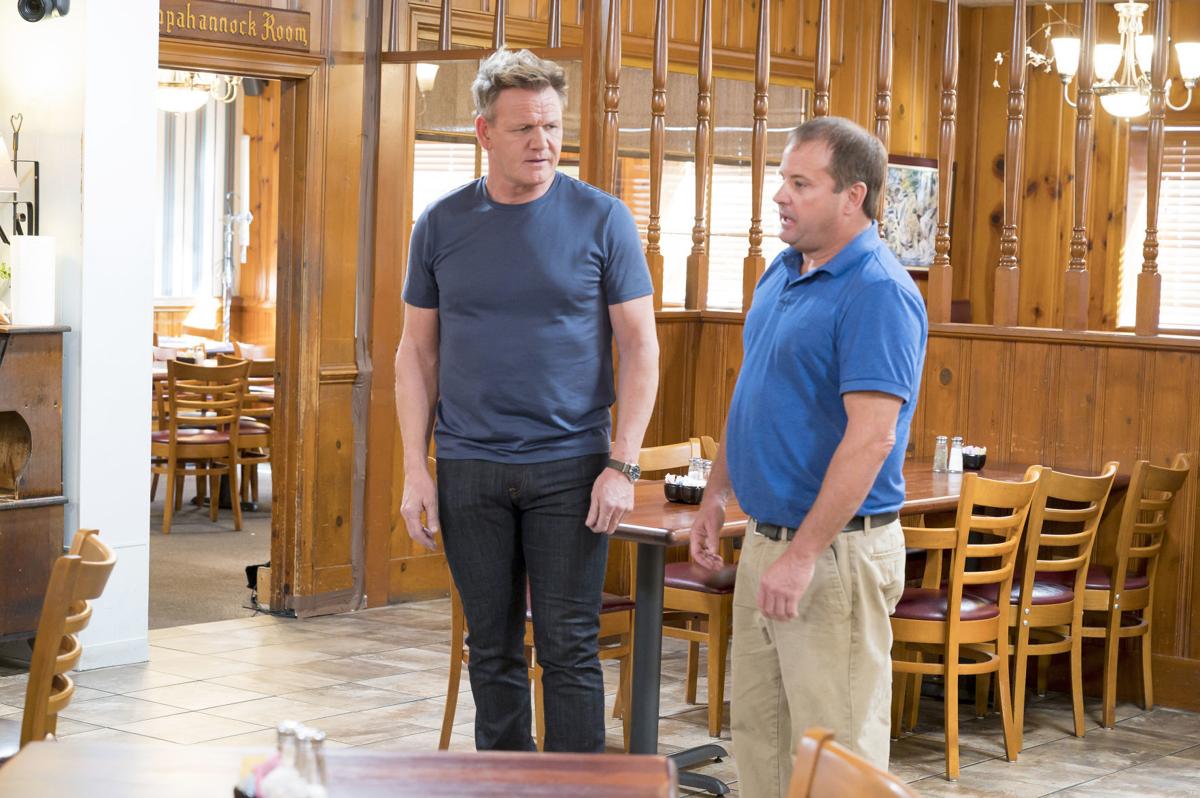 Gordon Ramsay meets with Duby Lowery, one of the owners of Lowery’s Seafood Restaurant.

In July last year, William “Duby” Lowery IV got an email at his seafood restaurant in Tappahannock. It was addressed to “restaurants seeking a little refresher, a second chance.”

Lowery’s is a family business that opened in 1938 and is now operated by Duby and his brother, Dave. The Essex County restaurateur didn’t have a clue who the anonymous email was from.

But on a lark, he responded. Soon enough, there followup emails, phone calls and Facetime sessions with his family. Eventually, scouts showed up at the restaurant a few blocks from the Rappahannock River in the Middle Peninsula town.

Lowery said the people responding never identified themselves as representatives of the Fox TV show “Gordon Ramsay’s 24 Hours to Hell and Back,” though as time went on, the Lowery family started to catch on.

Until some 100 members of a production crew descended on Tappahannock the last weekend in October, the name “Gordon Ramsay” still hadn’t been uttered to the Lowerys.

“We didn’t really know until they tried to hide their truck at the post office that Friday,” he said. “I told them that if they learn anything about living in a small town, it’s that you can’t do something like fencing off a parking lot at 3 in the morning without half the town finding out about it.”

At 9 p.m. Tuesday on Fox, viewers can see how celebrity chef Gordon Ramsay and his show’s crew spent “a whirlwind” few days at Lowery’s revamping the menu, updating the restaurant’s décor, retraining the staff and delivering some tough love to the managing brothers about how things should operate.

“Overall, it was a real shot of adrenaline for us, a positive thing,” said Lowery, who believes that paring the restaurant’s menu down from 65 to 20 entrees “will give us the time we need to give more attention to every meal we serve.”

He said he enjoyed interacting with Ramsay, who’s seen tossing an apple at him in a commercial promoting Tuesday night’s episode, which starts the third season of the show.

“I knew something was coming,” said Lowery, referring to the apple, “but originally thought it was going to be a tomato.

“Ramsay’s a down-to-earth, genuine person, and just has this persona to play to get the show started,” Lowery said. “We think things went well, but to be honest, none of us got much time to talk to him off camera. He’s there for 24 hours and a lot was happening for him and for us.”

Sharing one critical part of the makeover experience were about 30 residents and staffers from Chancellor’s Village in Spotsylvania County. Those residents and a handful of staff members were bused in to be diners at Lowery’s for the moment when a disguised Ramsay reveals himself and starts the clock on the restaurant renovation.

Krista Wells, the life enrichment director at Chancellor’s Village, said she’d gotten a call months before the October makeover to see if she could provide 30 or so folks to be filmed dining “at a restaurant in Tappahannock.”

“They just said it would be for a restaurant makeover show with a celebrity chef,” she said.

When the day came, show producers put cameras on the inside and outside of the bus. And when the bus got to a warehouse in Tappahannock where things were being coordinated, the group welcomed an anonymous Ramsay onboard in a disguise that included him sitting on a scooter.

Arriving at Lowery’s, the Chancellor’s Village visitors were instructed to go in and order what they wanted from the menu.

“It was fun for them, though some of the residents hadn’t seen the show and didn’t understand what was going on when Ramsay revealed himself and started yelling about what was wrong with his meal and the service,” she said. “I tried to share that this was just his TV persona and that he’s really a nice guy who would help the restaurant before the show was done.”

Wells said it was interesting to see how the show came together. She and a few other staffers were asked to come back the next evening when the changes that Ramsay inspired were revealed.

Lowery noted that a major change was the “freshening” the interior decorators and workmen gave to the entrance and dining rooms, something the restaurant staff worked for days afterward to finish up.

“Up front, there’s a much cleaner-looking, more modern nautical feel,” he said, noting that the new design includes boat props, including ship’s wheels, on the wall and in other spots.

More importantly, he said, was the trimming of the menu. Ramsay worked with the staff on dish preparation.

“We knew the winter menu was too large, but he helped us to do something about it, consolidating it so every plate gets more loving care,” he said.

As for the management counseling, he noted that Ramsay and the research his staff had done identified the fact that he and his brother disagreed on some things that needed to be worked out.

“We just needed a coming together,” said Lowery. “He got us to clear up who was working when, who was in charge and some other things. For a lot of reasons, we’re getting along better now.”

Perhaps an even bigger—though unplanned—bonus is that the TV show will prove that Lowery’s remains open.

“We put the restaurant on the market a while back, and a lot of people thought it meant we’d closed, though we never did,” said Lowery.

The eatery is no longer on the market.

“When they see this show, maybe folks will understand that,” Lowery added.

Gordon Ramsay meets with Duby Lowery, one of the owners of Lowery’s Seafood Restaurant.