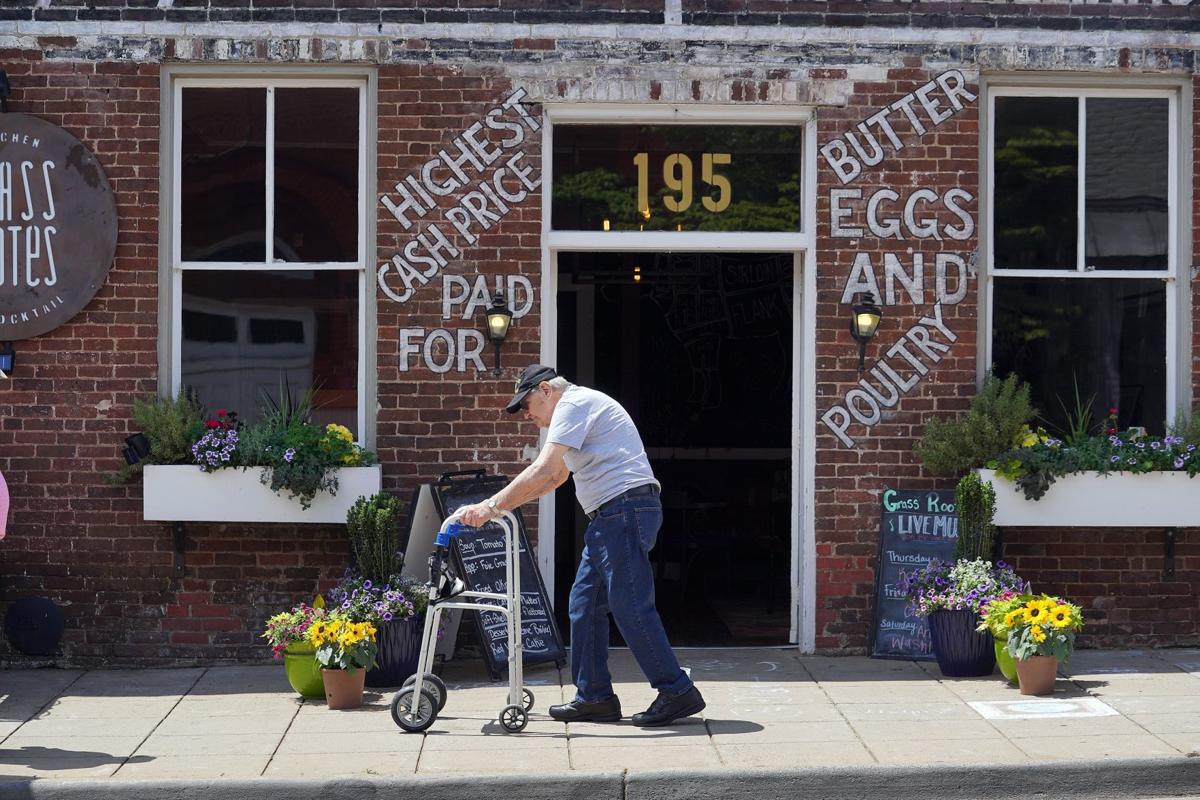 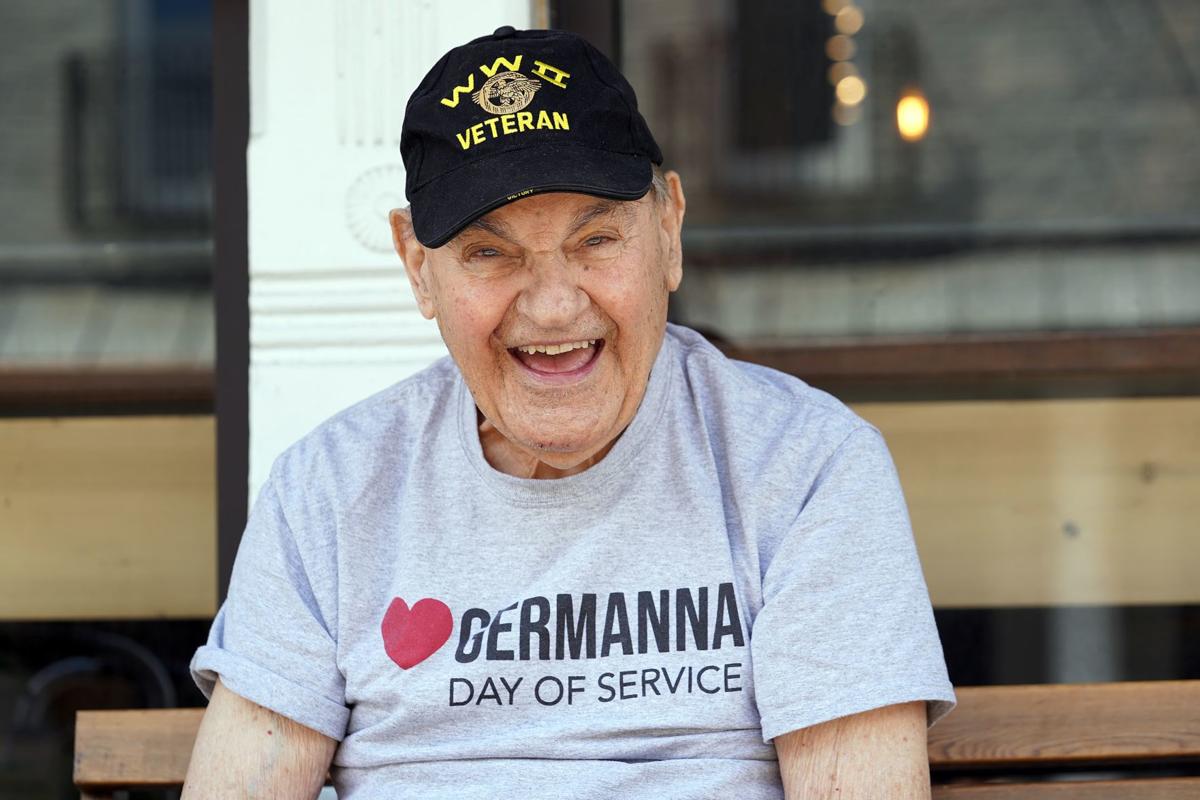 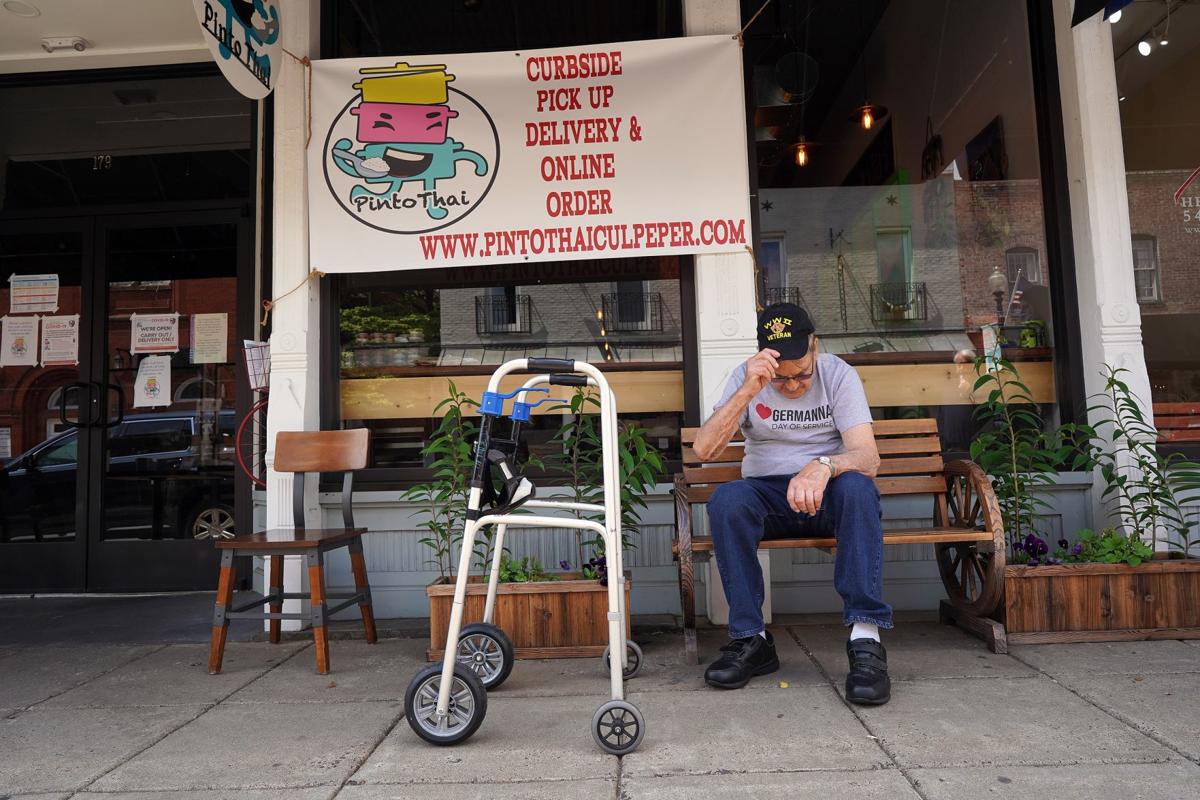 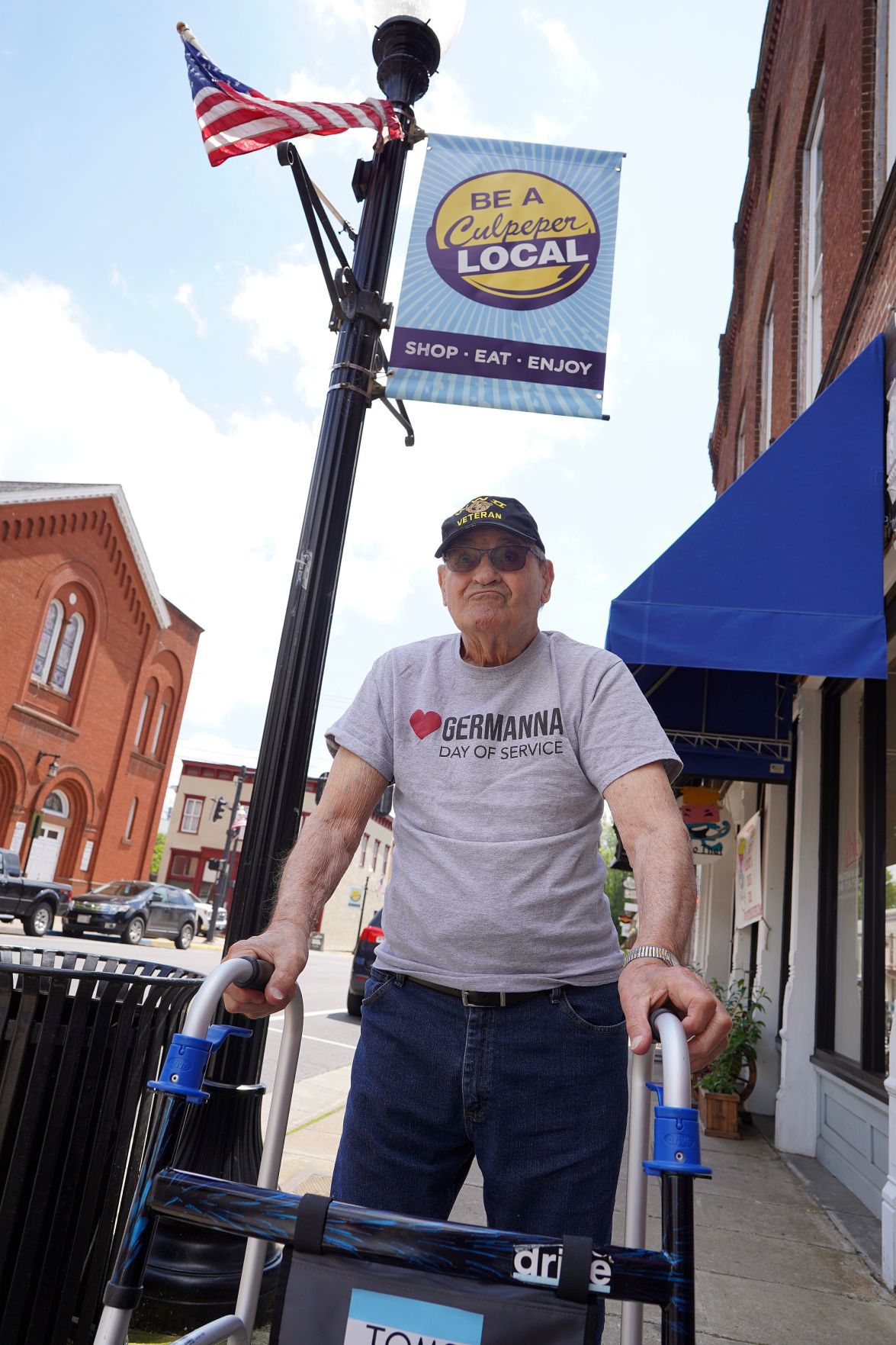 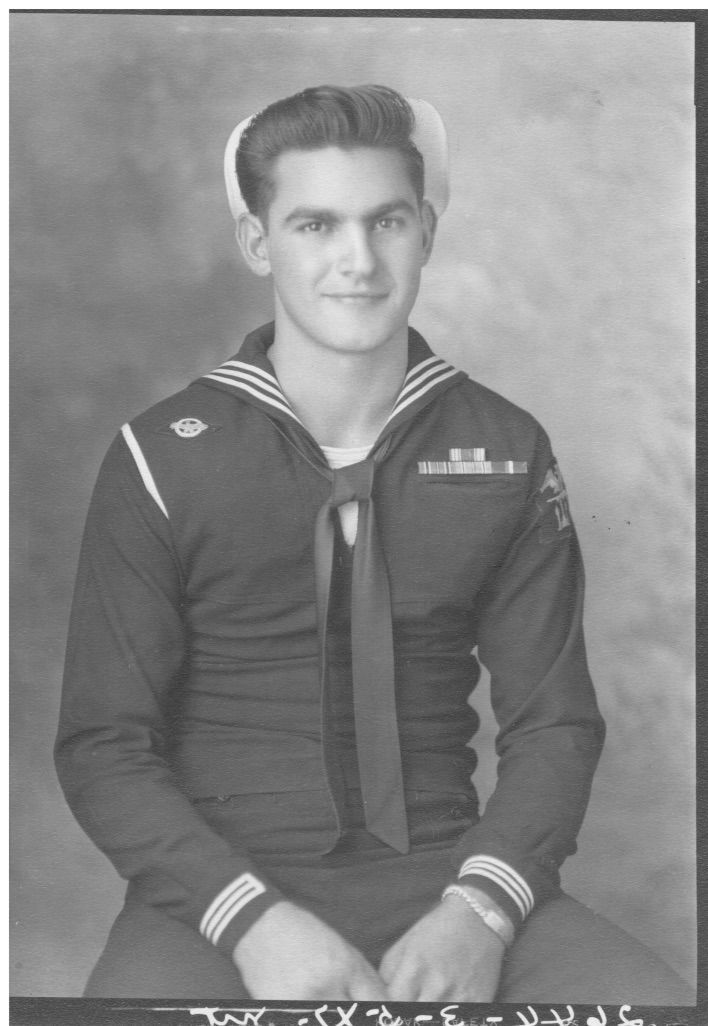 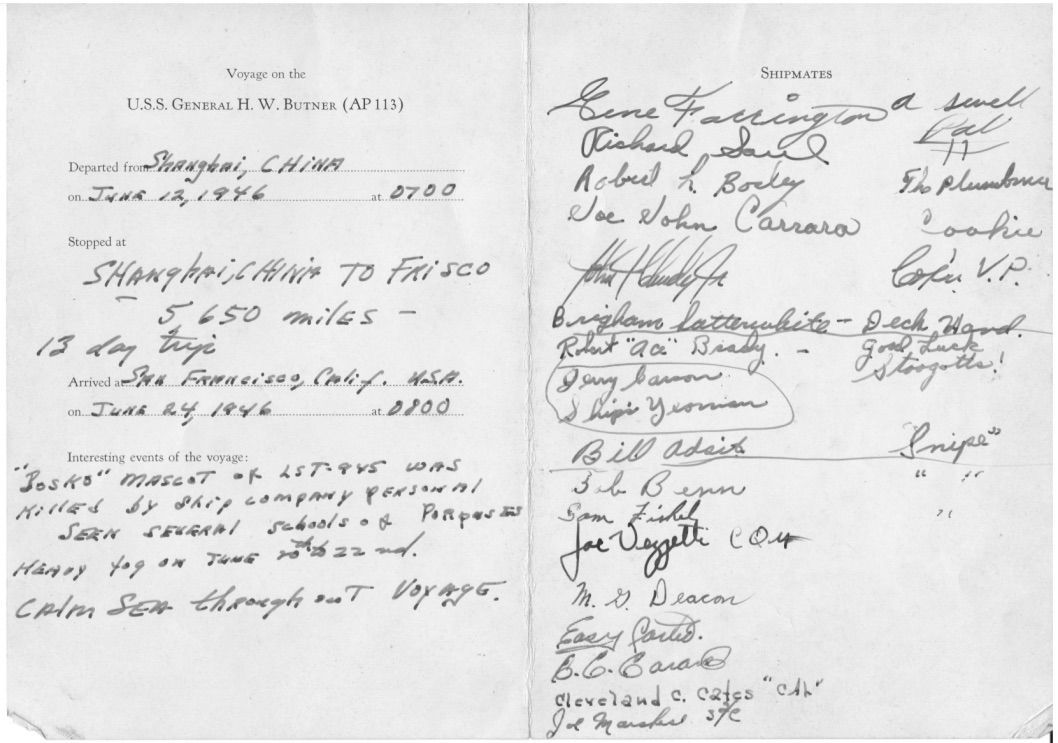 Thomas Paul Feorene jotted these notes about his 5,650-mile Navy voyage from Shanghai, China, to San Francisco in 1946.

By FROM STAFF REPORTS

Known to many simply as “Grandpa Tom,” he’s putting in thousands of steps on his walker, crisscrossing Germanna’s large service region in an effort to encourage area people to donate to the Germanna Cares program. It helps students who’ve lost jobs or are otherwise hurt by the pandemic—as well as those with other serious needs in this difficult time—to continue their education.

On Tuesday, he was sailing up and down the streets of downtown Culpeper with his walker.

The son of an Italian immigrant, Feorene knows what it’s like to go though challenging times as a young person and come out stronger and better.

“It’s understandable if students and their families are worried about the future at a time like this. Tom Feorene should give them hope,” said Mike Zitz, Germanna Community College’s spokesman. “He came out of high school during a war, his ship was targeted by kamikaze pilots, and he survived. After the war, he went from an entry-level job to owning the business. He faced challenges and despite of them made a wonderful life for himself and his family. Young people today will do the same thing.”

Feorene was born in 1926 in Fairmont, W.Va. Upon graduation from high school, he joined the Navy and served as a mechanic during World War II in the Asiatic-Pacific theater. His vessel, the USS LST-945 Beachcomber, a tank-landing ship, took part in the battle for Okinawa, a Pacific island prized by the Japanese.

Feorene wrote in his wartime diary that the Beachcomber “got two planes” during the naval engagements, one of the deadliest of the war. The U.S. invasion, which began Operation Iceberg (the Battle of Okinawa), saw Japanese 350 kamikaze pilots dive their planes into U.S. ships to take them out. Kamikaze suicide strikes were comparable to today’s cruise-missile attacks, except the planes were piloted by men.

"It makes you jittery," Feorene said of the kamikaze attacks, talking at supper Tuesday with his family.

U.S. ships also had to contend with the heavily armed and supposedly unsinkable Japanese battleship Yamato. It was eventually sunk by the Americans. But in the fighting, 36 U.S. ships were sunk, many by kamikaze strikes, and nearly 10,000 sailors were killed, drowned or wounded.

After the war, Feorene worked at a glass plant and went to night school to become an auto mechanic. He worked his way through school and wound up with a job as an automobile mechanic at a Sinclair gas station in his hometown of Fairmont. Eventually, he bought the station.

He worked until he was 86 years old, when he retired to take care of his ailing wife, Pauline. They had been married for 70 years when she passed away in 2017.

In February, Feorene came to Spotsylvania County to visit his daughter, Sandy Feorene Davis; son-in-law, Bruce Davis; and granddaughter, Hope Davis. The plan was for him to stay a couple of months. His visit was extended by the arrival of the COVID-19 pandemic.

“He takes a walk every day,” said Bruce Davis, who is assistant to the president for institutional advancement at Germanna. “He wants to use that walk as a way to raise money for the Germanna Cares program.”

The plan is for Feorene to take walks in each of the eight localities Germanna serves—the counties of Culpeper, Madison, Orange, Stafford, Spotsylvania, Caroline and King George, and the city of Fredericksburg, Davis said. His Tuesday walk in downtown Culpeper was the first one that has taken him outside the Davis’ neighborhood in Spotsylvania.

Those who wish to support Feorene’s effort can visit germanna.edu/donate or Germanna’s “Grandpa Tom” Facebook page. To see and hear more about Tom, watch his YouTube video, here: youtu.be/XCA945v4aW0.

The deadline for donations is Victory over Japan Day, aka VJ Day, which will be observed Sept. 2.

Thomas Paul Feorene jotted these notes about his 5,650-mile Navy voyage from Shanghai, China, to San Francisco in 1946.