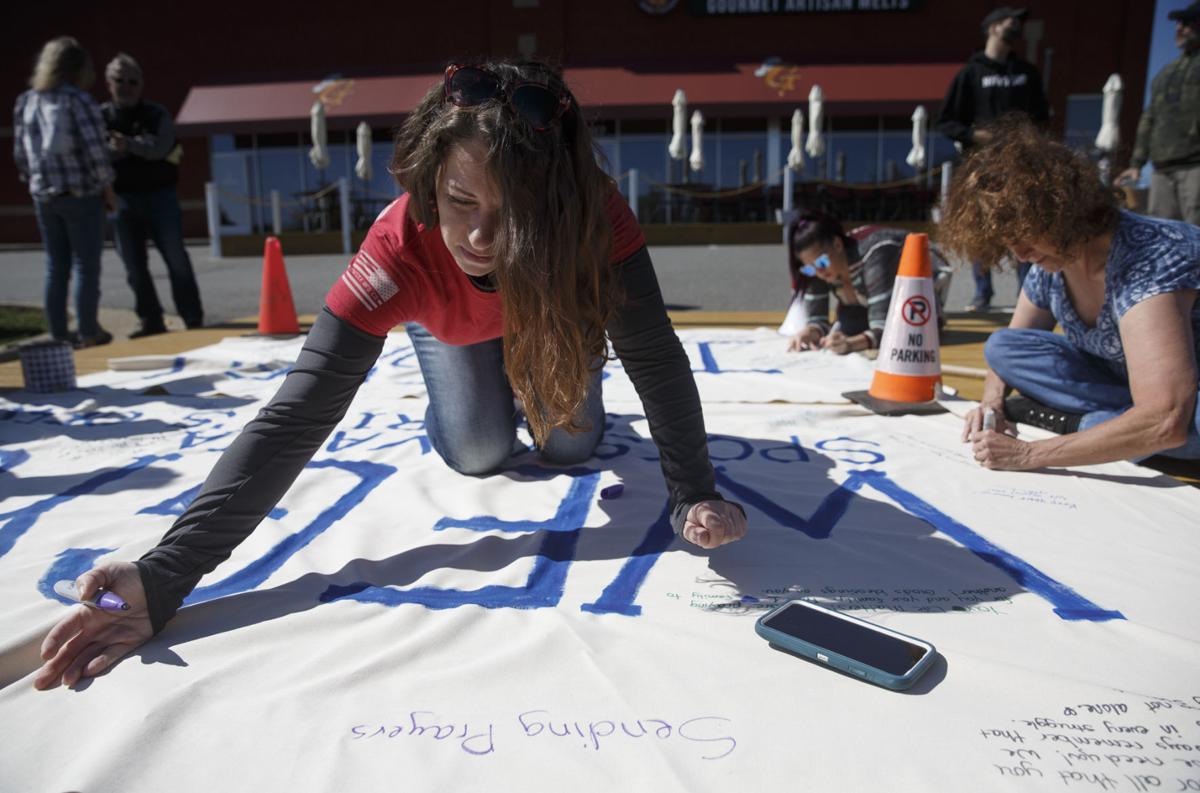 Back the Badge organizer Amy Sudbeck writes on banners for the Sheriff’s Office and Isiah Brown. 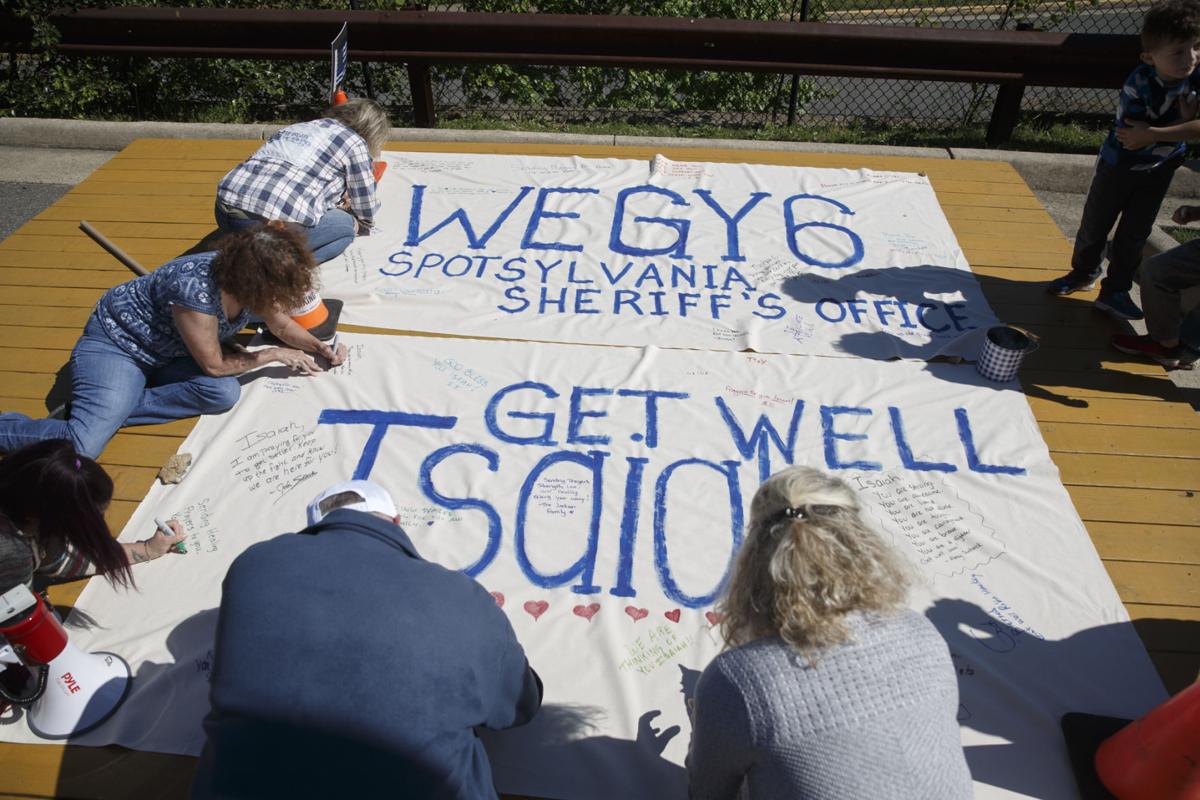 Back the Badge supporters sign banners for both the Spotsylvania Sheriff’s Office and Isiah Brown. 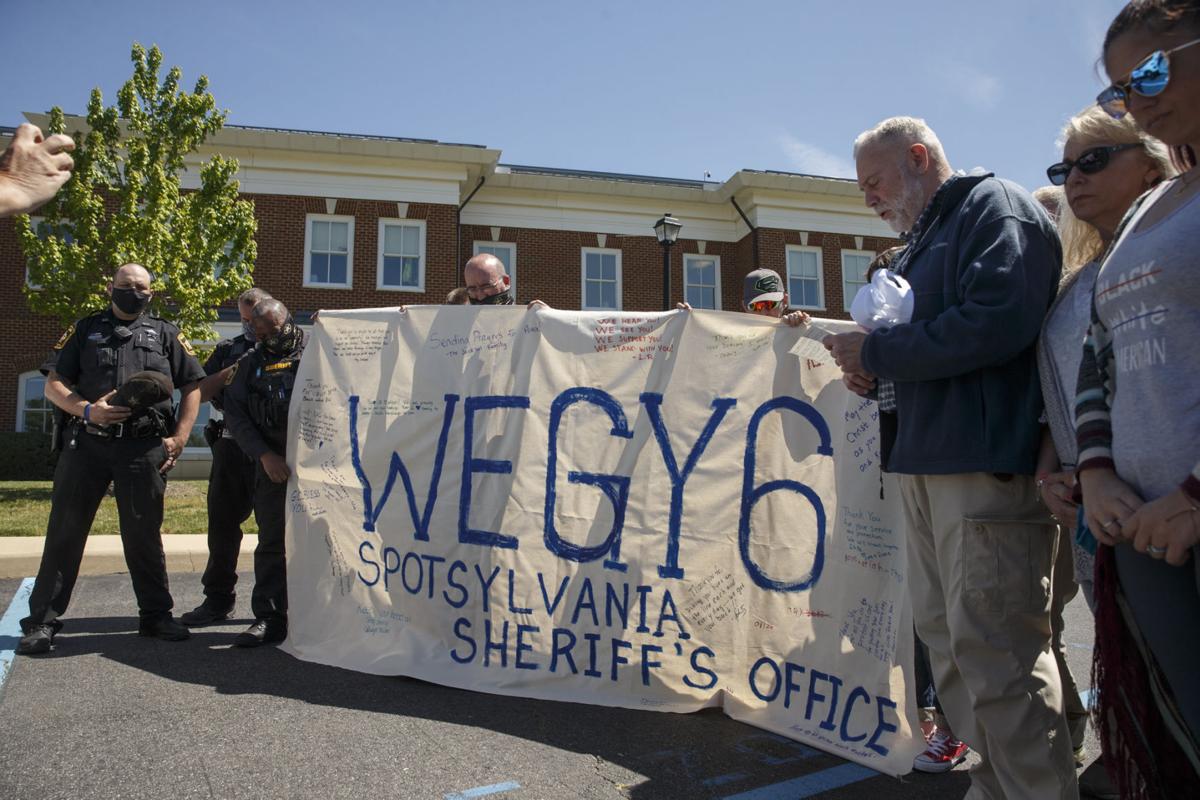 Tom Sudbeck (right) offers a prayer after a signed banner is delivered to the Spotsylvania Sheriff’s Office during an event on Saturday.

“There’s still so much divide and every time there’s an officer-involved shooting, you’ve got those on the left and those on the right,” said Sudbeck, founder of both Back the First Responders Foundation and Back the Badge, a “pro-blue” social media group of about 7,500 members. “In [Spotsylvania County’s Isiah Brown] incident, that’s not the case. I feel bad for both men, and I think a lot of people agree.”

On April 21, Spotsylvania Sheriff’s deputies were dispatched to a domestic altercation call in the early morning hours in the 12200 block of rural Catharpin Road. State police said a deputy, whose name has not been released by authorities, encountered Brown, 32, in the roadway walking away from his residence.

Virginia State Police Sgt. Brent Coffey said the deputy attempted to speak to Brown and it was during that encounter that the deputy fired his service weapon. Brown was shot multiple times and the deputy immediately rendered medical aid.

Brown was transported to Mary Washington Hospital, where he is still being treated for what authorities described as serious but non-life threatening injuries.

The Sheriff’s Office has released the 911 call and body camera footage of the shooting. The recordings indicate Brown was holding a cordless phone and the deputy may have mistaken the phone for a gun.

About 11 a.m. Saturday, Sudbeck led a small mobile caravan carrying two large white banners filled with messages of hope, prayer and sympathy in support of both the Spotsylvania deputy and Brown.

“This divide is only getting worse,” said Sudbeck. “The polarization is awful, no one’s thinking for themselves anymore, they just jump one side or the other and it’s just pure hate, and it needs to stop.”

Sudbeck said the actions of former Minneapolis police officer Derek Chauvin in the George Floyd case contributed significantly toward the animosity that’s evident today between law enforcement officers and the public across much of the country.

“We’re all disgusted by what Derek Chauvin did, but what one police officer did, it doesn’t represent police officers across the country,” said Sudbeck. “We need them and they need us. We don’t want to live in a world without law enforcement.”

Sudbeck’s mother-in-law, Annette, of Fredericksburg said Saturday morning’s event was all about raising awareness and promoting peace in one small part of America.

“We’re all fellow human beings, we still have to love and care for each other, we still have to abide by the law, yes we do,” she said. “It’s not about the left, or about the right, we’ve got somebody fighting for their life in the hospital and we have an officer and his family fighting to live their lives, too, with all of what’s going on in our society today.”

About 20 members of the Back the Badge group met Saturday outside Gourmeltz 90’s Music Bar & Draft House in Cosner’s Corner to set out the long banners for Back the Badge members to write encouraging messages of optimism for both men involved in the incident.

“We’re praying and hoping that Isiah recovers, we’re praying for his family,” said Jessie Leigh Bolinsky of Spotsylvania. “We’re also here in support of the police officers who are fighting and working every day for our safety. It’s very important for me to show my support here today.”

Sudbeck said support for law enforcement is critical now because agencies across the county are losing men and women each day.

“I think police departments are hurting, they’re losing people, they’re having a harder time recruiting people,” said Sudbeck. “And it’s frustrating, because a lot of the stuff out there isn’t true. Police officers have families, kids, parents—they’re human beings doing a job.”

For those who couldn’t make the event, Sudbeck solicited messages from her social media group ahead of the event then wrote the messages on each of the banners Saturday morning.

Once the messages were placed on the banners, a group of seven vehicles, some bearing the “thin blue line” and American flags, headed out together to deliver one banner adorned with the message “We Got Your Six” to officers on duty at the Spotsylvania Sheriff’s Office. That banner will be passed along to the deputy involved in the case. The second banner for Brown offering well wishes was taken by a sole driver to his family at the hospital. Sudbeck said she hopes the banners to each of the men will help bring some assurance that the public is behind each of them, praying for both men involved.

“We hope these banners will bring them some comfort and some healing,” said Sudbeck.

In the meantime, the Virginia State Police Bureau of Criminal Investigation’s Culpeper Field Office, Police Shooting Investigation Team, continues to investigate the incident. Once that investigation is completed, Fredericksburg Commonwealth’s Attorney LaBravia Jenkins will review the findings and decide whether charges are warranted.

Back the Badge organizer Amy Sudbeck writes on banners for the Sheriff’s Office and Isiah Brown.

Back the Badge supporters sign banners for both the Spotsylvania Sheriff’s Office and Isiah Brown.

Tom Sudbeck (right) offers a prayer after a signed banner is delivered to the Spotsylvania Sheriff’s Office during an event on Saturday.