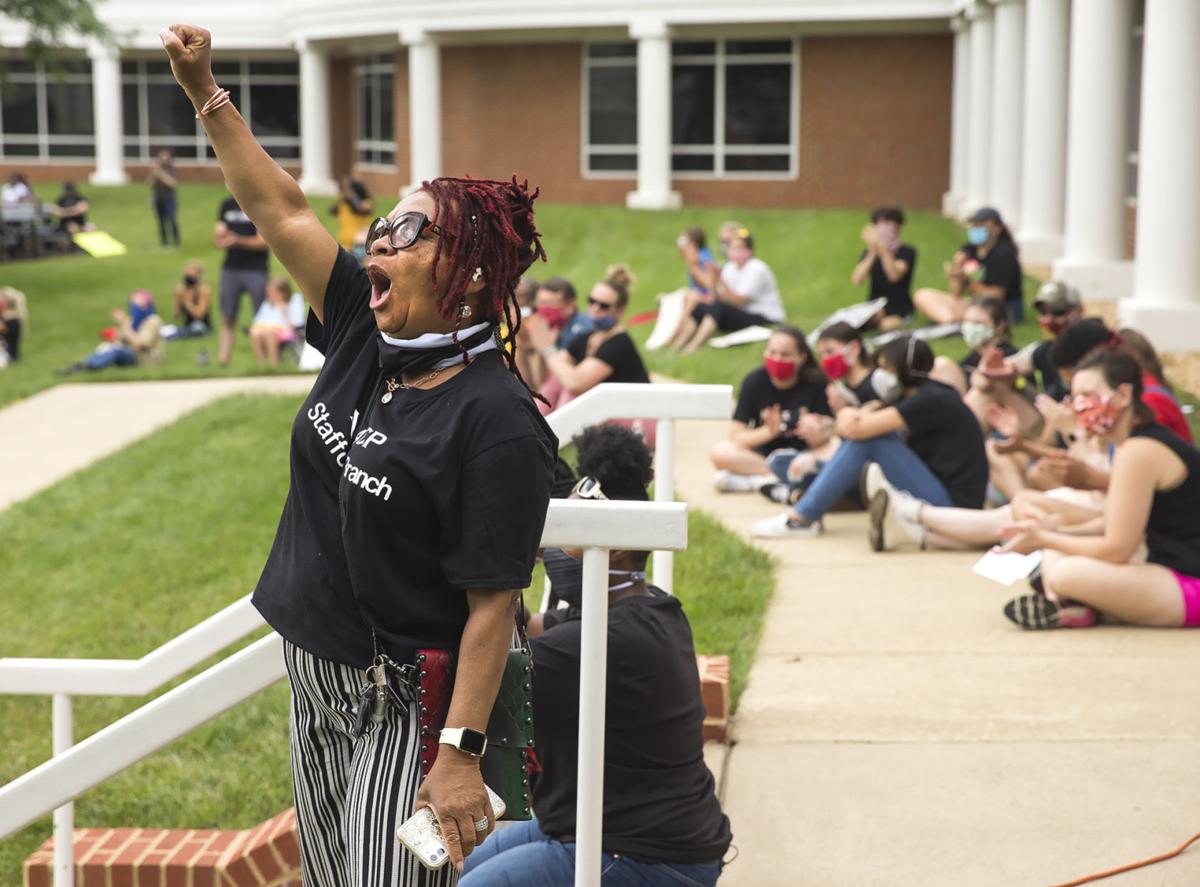 NAACP member Kimbra Staten reacts to a speaker during a Stafford NAACP Juneteenth rally at the Stafford County Courthouse on Saturday, June 20, 2020. 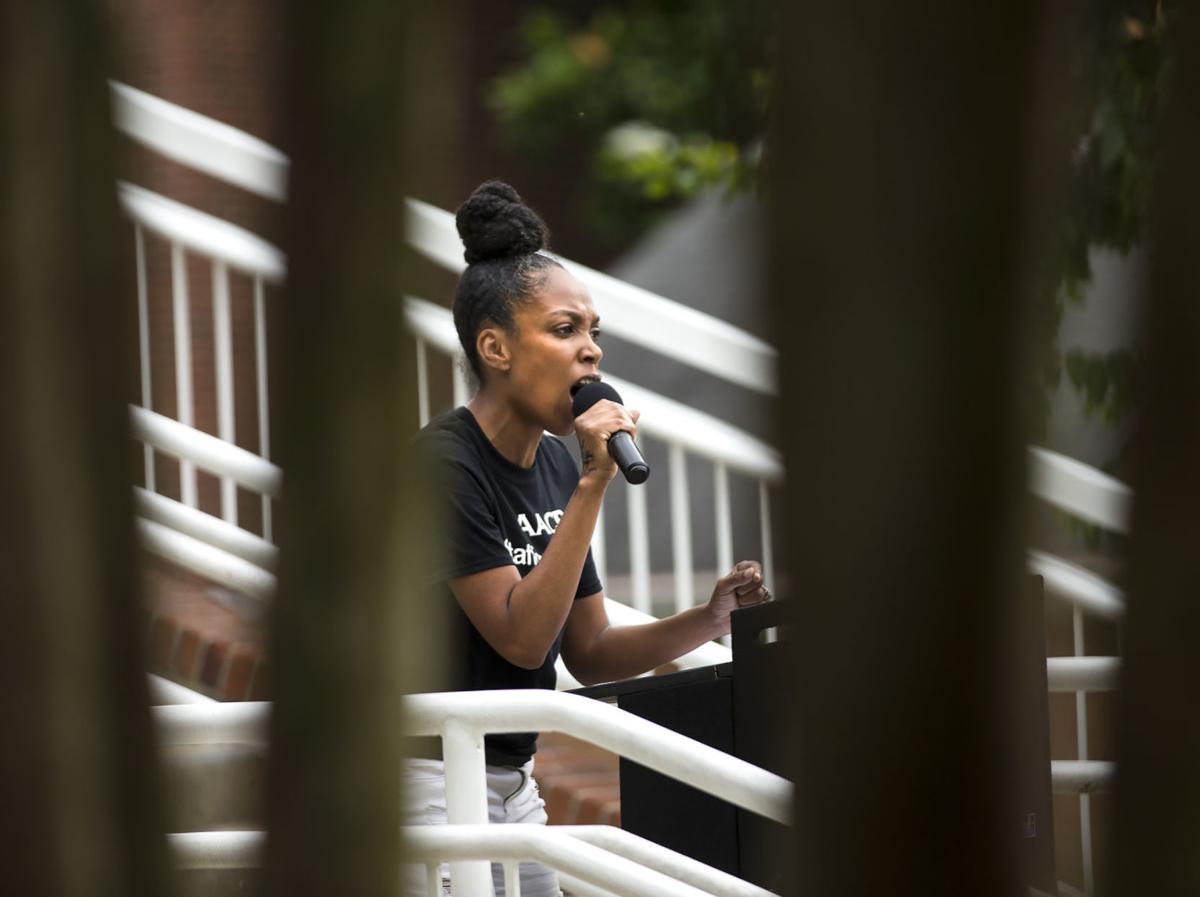 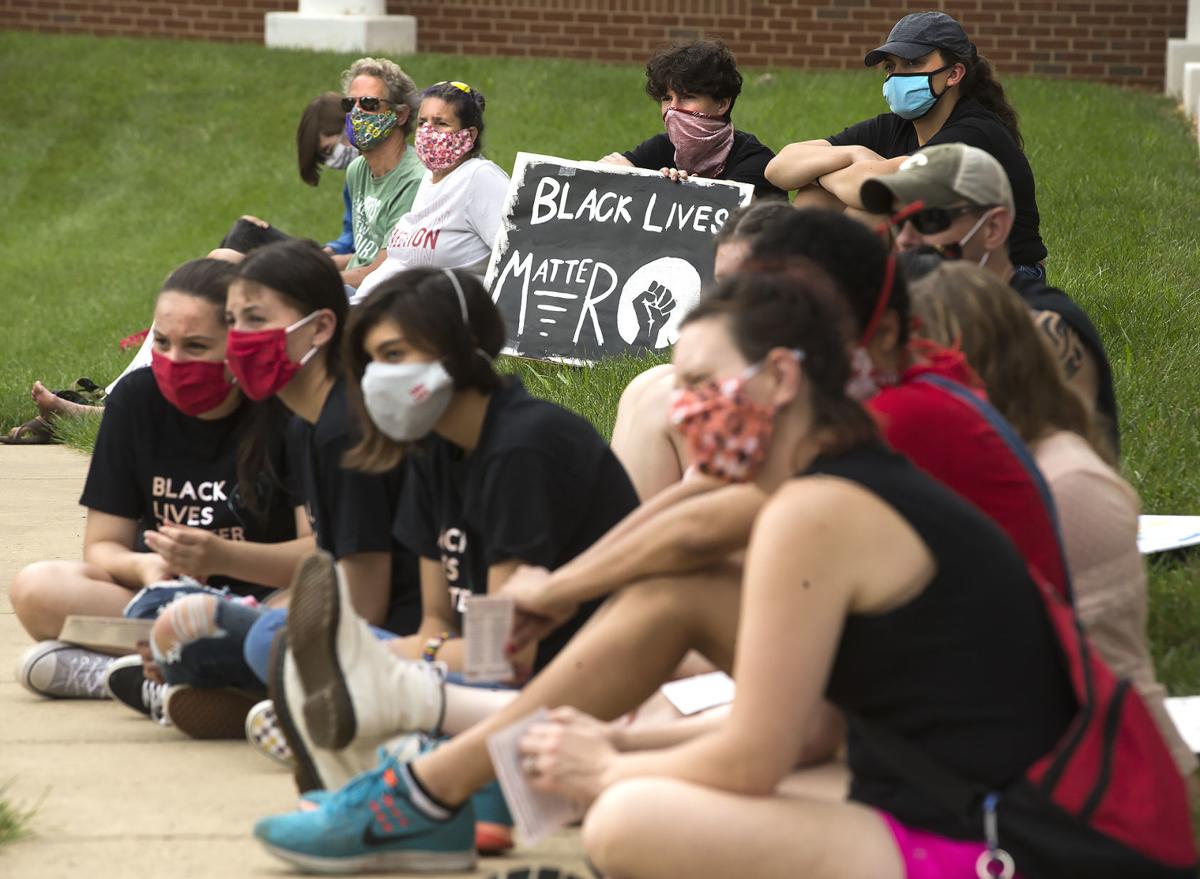 People listen to speakers during a Stafford NAACP Juneteenth rally at the Stafford County Courthouse on Saturday, June 20, 2020.

The crowd gathered at the Stafford County Courthouse Saturday afternoon seemed smaller and less boisterous than earlier Black Lives Matter protests that have sprung up in the area in recent weeks.

Music was played and more than a dozen speakers—adults, teens and children—addressed the gathering. Those speakers passed along messages that have become familiar since the killing of George Floyd in Minneapolis.

The speakers implored those who attended the late afternoon rally to keep pushing for change. They talked of staying vigilant and acting instead of just talking. They spoke about the importance of voting, and doing so for the right candidates.

The Stafford County NAACP sponsored the rally, and created a list of initiatives, many of which focus on limiting police powers, to change what speakers called the racist foundation of the American system. The list included such things as creating a civilian review board for the sheriff’s office, requiring deputies to wear body cameras and starting a police misconduct database.

The initiatives also call for renaming Jefferson Davis Highway and for dismantling or removing “symbols of hate.”

Several speakers also highlighted what is called the “school to prison pipeline,” in which African-American students are disproportionately punished.

The crowd also gathered as a celebration of Juneteenth, the June 19 holiday that originated in Texas and marks the end of slavery after the Civil War.

Most of the crowd lounged in the courtyard area. Several booths were set up for visitors to sign petitions and the register to vote. A small tent was set up in the back area and manned by a handful of Sheriff’s deputies, the only obvious police presence.

He told the crowd that the movement doesn’t stop with statues coming down or road names being changed, but rather with “our hearts, minds and mentalities.”

People with certain mentalities need to be called out, he said, and there need to be policy and life changes. Cole added that he is tired, and that he expects protesters are, too. He asked them to persevere.

Jenn Coolidge, a white Spotsylvania County resident and activist, also spoke, telling the crowd it is their “duty to speak out” to get rid of such things as the large Confederate flag displayed in Stafford so Interstate 95 traffic can see it. One of the petitions at the rally seeks to change a county ordinance as a way to get the flag removed.

Gary Holland, a Stafford resident and NAACP member, stood on the courthouse steps and wondered: “What better place to raise our voices” against injustices perpetrated by police and the criminal justice system against African Americans?

“Lady Justice is supposed to be blind,” he said, “but she isn’t color blind.”

Holland related racism to a leaky faucet he once had in his house. It dripped constantly.

“There has been a drip, drip, drip” of racism and injustice far too long, he said. That drip became a stream, followed by a flood rushing across the globe and “people are saying enough is enough ... Let’s stop this flood.”

He and other speakers focused on the younger generation, saying they need to step up, but also need support.

Holland challenged them “to roll up your sleeves and get to work. We need to put our hands to the plow.”

Nyesha Wilson—a U.S. Army veteran, activist, actress and comedian who lives in Stafford—told the crowd that young people were waiting for “a wakeup” and that “we are finding our voice.”

She warned them about people who want to silence them by distorting the ideas of such figures as Martin Luther King Jr., who she said was “consulting with God” and not seeking a photo op.

Wilson, like other speakers, said white people should prepare to be uncomfortable because “there is a disconnect.”

Wilson said the narrative is changing, and she asked the crowd to stick with the cause.

“We need you to bear with us,” she said.

After five days of waiting, Brenda Murray finally got mail delivered to her home last Friday.

NAACP member Kimbra Staten reacts to a speaker during a Stafford NAACP Juneteenth rally at the Stafford County Courthouse on Saturday, June 20, 2020.

People listen to speakers during a Stafford NAACP Juneteenth rally at the Stafford County Courthouse on Saturday, June 20, 2020.