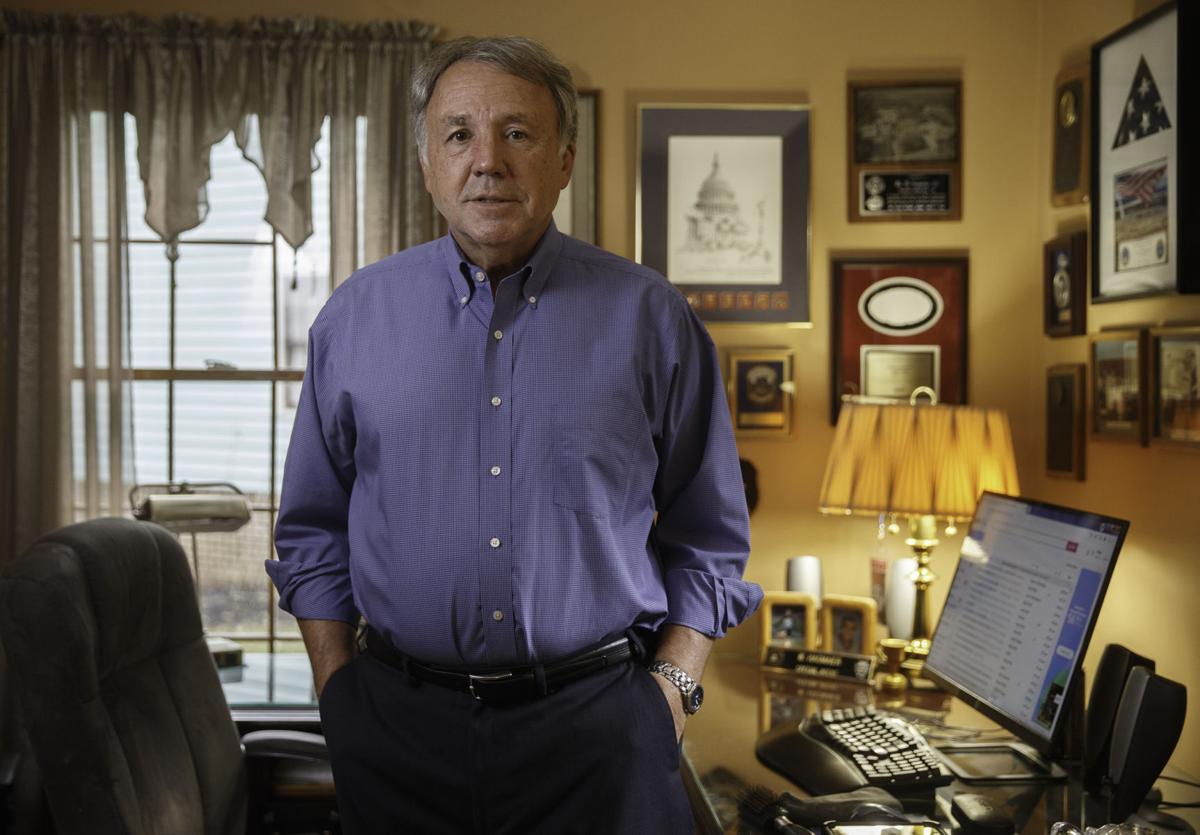 Bill Hagmaier, a retired FBI agent who joined the Behavioral Sciences Unit in 1983, will be portrayed by actor Elijah Wood in the upcoming film ‘No Man of God.’ 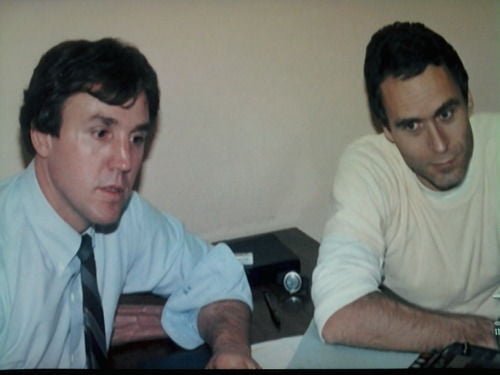 Hagmaier, who lives in Spotsylvania, interviews Ted Bundy in the late 1980s. The talks are the focus of the new film.

Elijah Wood plays former profiler Bill Hagmaier in the new film 'No Man of God,' while Ted Bundy is portrayed by Luke Kirby in the film that focuses on the talks the Spotsylvania resident had with the serial killer. 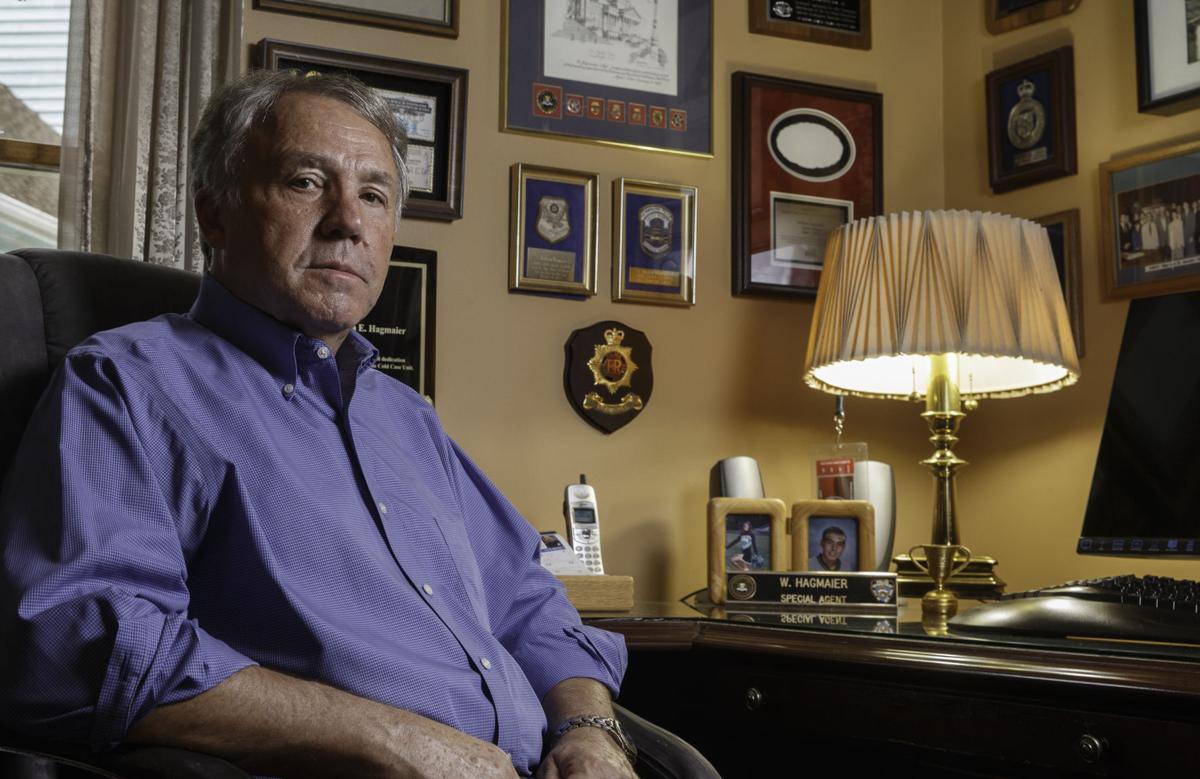 Bill Hagmaier, a retired FBI agent who joined the Behavioral Sciences Unit in 1983, will be portrayed by actor Elijah Wood in the upcoming film No Man of God that focuses on his interviews with serial killer Ted Bundy.

IT HAS been decades, but former FBI agent and profiler Bill Hagmaier remembers his first meeting with Ted Bundy with amazing clarity.

The young profiler had prepared for the meeting, learning all he could about the accused serial killer from every police report and book he could get his hands on. Hagmaier said he was in the midst of explaining who he was when Bundy pulled out a folder filled with papers published by the very Behavioral Science Unit that Hagmaier was part of at Quantico.

“He’s got stuff published by the BSU that I’ve never seen before, and I’m part of the unit,” said Hagmaier. “I knew then and there that this guy would be formidable.”

The connection Hagmaier developed with Bundy is the subject of a new movie, “No Man of God,” starring Elijah Wood and Luke Kirby, which will be released in theaters and on streaming services Aug. 27.

The Spotsylvania County resident, who retired years ago, said his first chat with Bundy came as a bit of a surprise. He was a relatively new member of the FBI Behavioral Sciences profiling unit at Quantico when he wrote to Bundy, though he had no high hopes the letters would lead to a meeting. The senior profilers in his unit also doubted Bundy would talk, noting that the killer made no secret of his distaste for FBI agents.

Hagmaier was making a perfunctory visit to a Florida State Prison on other business when he stopped by to thank the warden. Hagmaier tossed out the possibility of speaking with Bundy, who was on death row for murdering a 12-year-old girl in Lake City, Fla.

But because of his letters, and a prison official who vouched for him, the agent suddenly found himself sitting across a prison table from the man who’d later confess to killing some 30 women.

Hagmaier said he tried to stay cool, and knew that he’d have to pass whatever sort of tests Bundy gave him. But the agent had his own goal: to get Bundy to answer questions that would feed a new survey the FBI was compiling to help understand and catch serial killers.

“You think I killed people,” Bundy said to Hagmaier. “Why should I help you?”

Hagmaier promised to never ask Bundy if he killed anybody, and told the serial killer that his answers could help other people save lives.

The real test came later in the meeting, when Bundy locked on the agent and challenged him by saying, “You think I deserve to die, don’t you?”

Aware of how critical his answer could be, Hagmaier first said it wasn’t his call.

“Yeah, but if it was your job, would you pull the switch?” Bundy shot back.

“Well, if you deserved it and it was my job, you’re toast,” Hagmaier responded.

Bundy laughed and the agent realized his honesty had opened a door, confirmed when the killer added: “Maybe we can talk.”

So Hagmaier met several times with Bundy as the confessed murderer moved closer to his 1989 death in the electric chair.

That relationship—with Bundy eventually calling Hagmaier his best friend, and asking the agent to ghost-write a letter to his mother and daughter about accepting Christ before his execution—is something the former agent said he constantly struggled with.

And it’s the main focus of “No Man of God,” the movie that Hagmaier finally allowed to be made. For years, he’d refused Hollywood suitors and turned down serious money because he didn’t want to be connected to a slasher movie or a film that focused on the decapitations, rapes and necrophilia of Bundy’s notorious crimes.

He finally gave the OK for this film because the director said the sole focus would instead be the relationship that formed between the FBI analyst and the serial killer.

In the movie, the agent is played by Elijah Wood, and Luke Kirby portrays Bundy. Hagmaier said Wood called him to say it was a great honor to play him in the film, and sort of apologized that he is much shorter than Hagmaier, but said he would do his best to portray him accurately.

The former agent shared other breakthrough moments with Bundy.

“You and your buddies are like fishermen standing by the lake,” Bundy told him. “You throw simple bait and it sinks just a few feet before you catch the inexperienced ones, the ones who are new to killing.”

But experienced serial killers, Bundy said, live at the bottom of the lake where police can’t find them.

“From down there they watch everything that’s going on at the surface. But you’ll never catch them, because if you try to get down there in the dark, you’ll drown,” said Bundy. “But I’ve been down there under that water, and if I trust you, I’ll take you down there with me.”

Hagmaier noted that Bundy eventually did just that, grabbing his hand on the night before his execution and in one long stretch sharing horrific details of murders he’d committed. It still haunts Hagmaier.

On another occasion, he and Bundy were talking about how to catch serial killers when the inmate said letting a body sit as long as possible after a murder was a good way to catch someone.

“He told me 80 percent of them will go back, to see what they accomplished,” said Hagmaier, realizing that meant Bundy himself had gone back, something the killer confirmed later.

The former agent said there were times he wanted to punch Bundy or simply get away from him, “especially when he’d shake my hand. And I’d ask myself, why am I shaking the hand that cut some woman’s head off? Someone like my wife or daughter.”

In those moments, he would try to remember that the connection was providing valuable information about serial killers, and details about Bundy’s crimes.

Just before Bundy was executed, he said he wouldn’t talk to investigators seeking details in open cases unless the FBI profiler was present.

Hagmaier said he was apprehensive, and didn’t want to get in the way of those investigators. But when it became clear that Bundy wouldn’t do it without him, the agent relented and did all he could to help the investigators, who were able to close some cases.

He would go on to consult on cases ranging from the Green River and Nightstalker homicides to the Danny Rolling and Aileen Wuomos serial murders, as well as the local Lisk–Silva killings.

Hagmaier said his career of confronting evil has taken a toll.

“I don’t really sleep most nights,” he admitted. He said visions of the lost kids from his past cases will come into his thoughts, along with the people who did horrible things to them. People like the savage pedophile and murderer in Miami who he helped police interrogate.

That investigation centered on a 9-year-old named Jimmy Rice who was snatched walking to his school bus. The killer buried the boy in barrels filled with concrete.

“You deal with cases like that over a career, and it takes a piece of your soul,” said Hagmaier.

Bill Hagmaier, a retired FBI agent who joined the Behavioral Sciences Unit in 1983, will be portrayed by actor Elijah Wood in the upcoming film ‘No Man of God.’

Hagmaier, who lives in Spotsylvania, interviews Ted Bundy in the late 1980s. The talks are the focus of the new film.

Elijah Wood plays former profiler Bill Hagmaier in the new film 'No Man of God,' while Ted Bundy is portrayed by Luke Kirby in the film that focuses on the talks the Spotsylvania resident had with the serial killer.

Bill Hagmaier, a retired FBI agent who joined the Behavioral Sciences Unit in 1983, will be portrayed by actor Elijah Wood in the upcoming film No Man of God that focuses on his interviews with serial killer Ted Bundy.