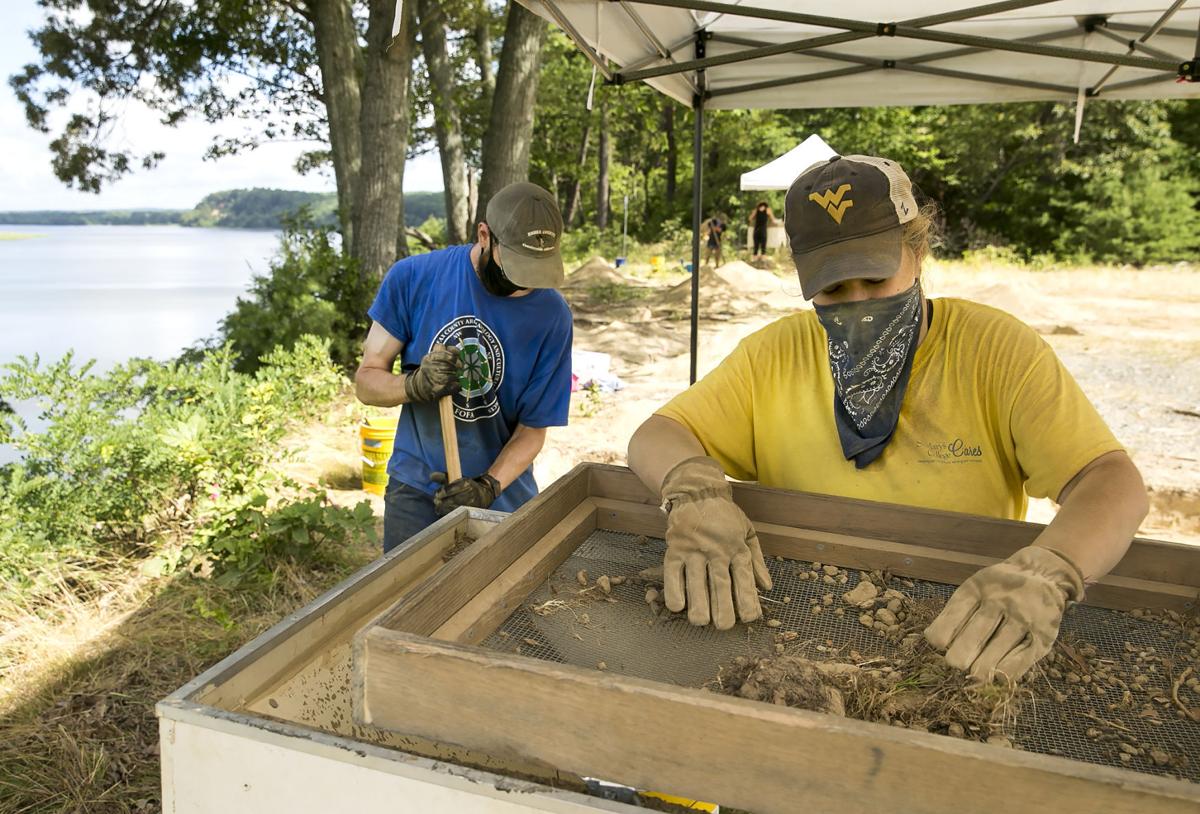 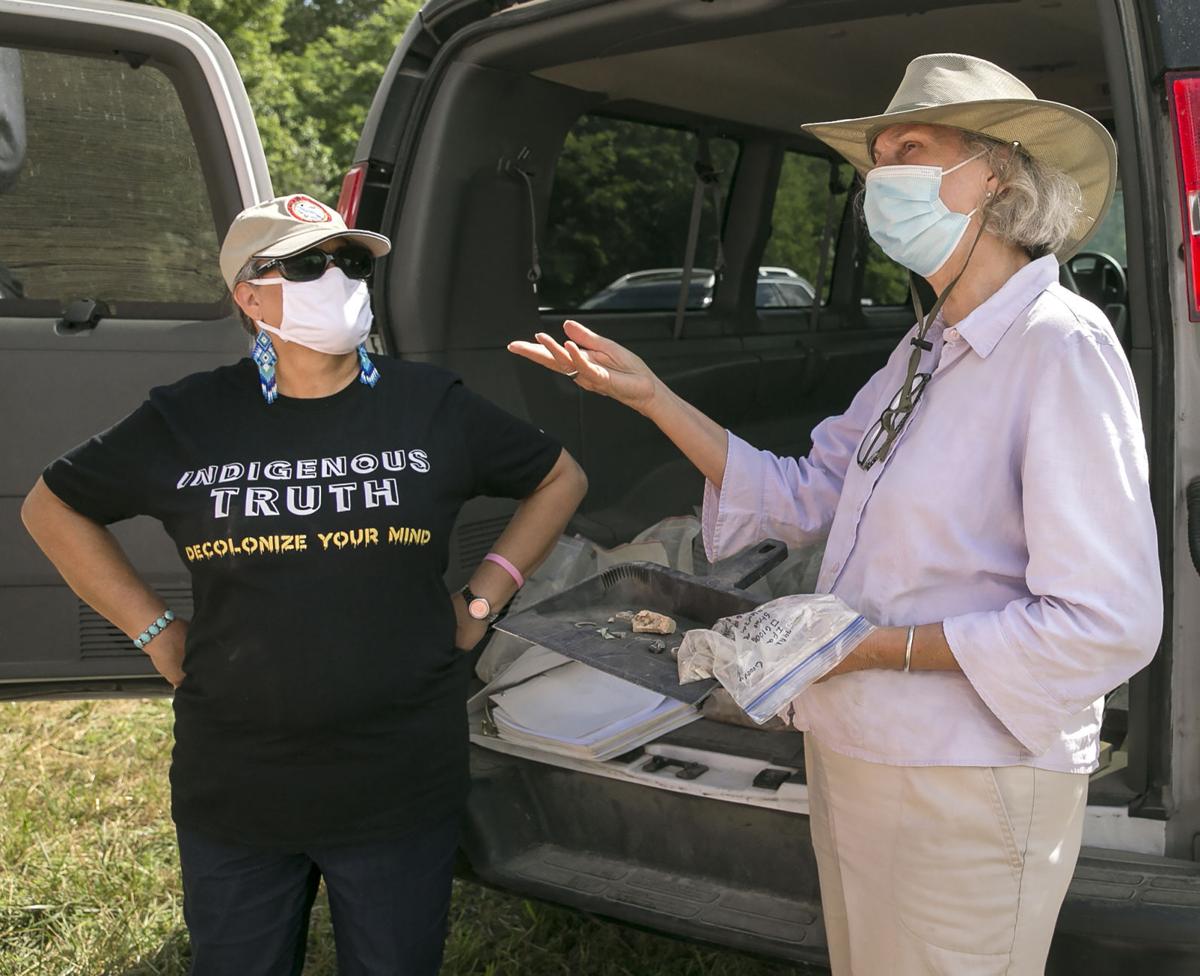 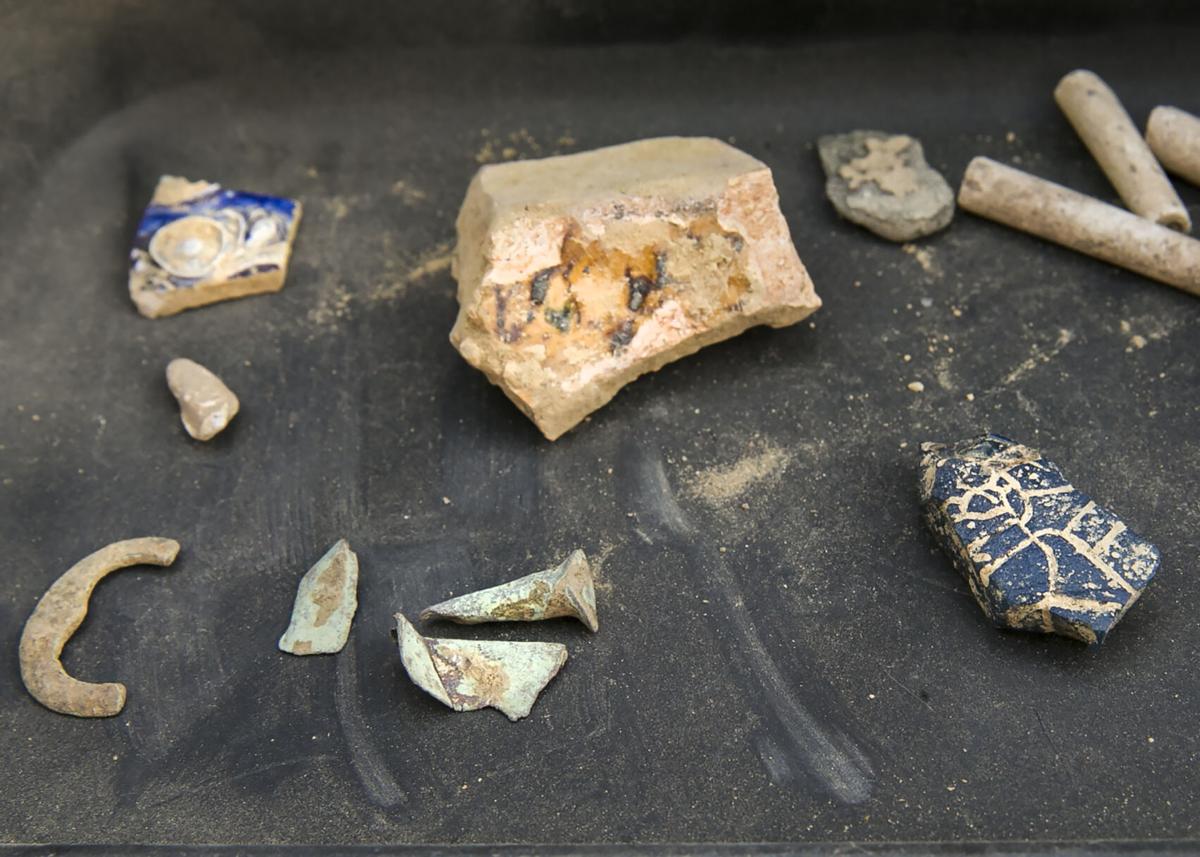 Copper buckles, glasswork and pipe stems are among items unearthed during an archeological dig on Fones Cliffs. 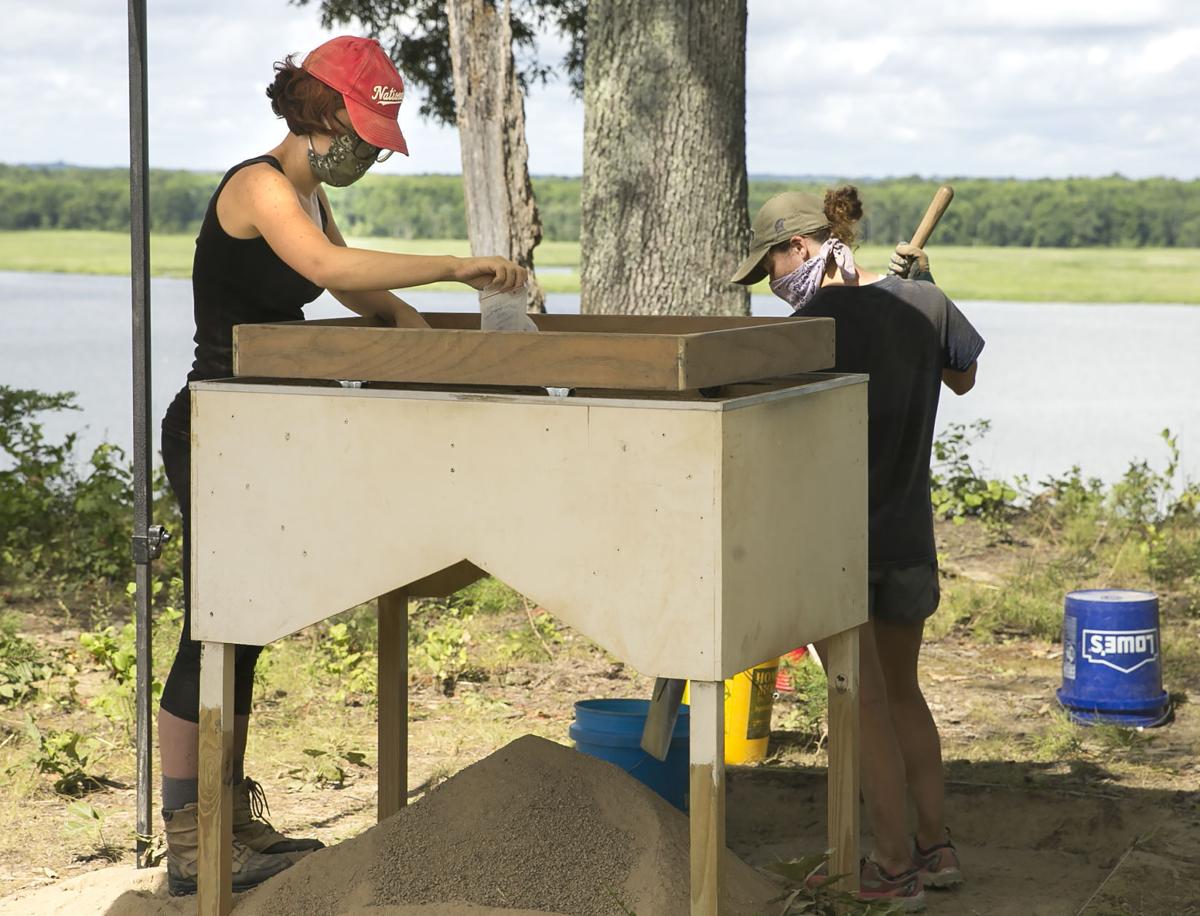 FONES CLIFFS—Julia King ducks under a cover that’s the only protection from the baking July sun for her team of archaeologists on this 250-acre property that’s now part of a federal refuge in Richmond County.

She uses a break in the ongoing excavation of several well-delineated discovery pits to share an array of Native American and Colonial artifacts unearthed near the edge of the cliffs that are exactly 82 feet above the Rappahannock River that rolls along below.

Stand near the edge of those cliffs—not too close, because it’s a dangerously immediate drop—and you are rewarded with a vista that’s breathtakingly beautiful, a 180-degree tableau of expansive marshland, stands of green hardwoods and a waterway filled with twists and turns upriver.

If there’s any place that can conjure thoughts of spirituality and the inspiring beauty of nature, it’s this spot at Fones Cliffs, now part of the Rappahannock River Valley National Wildlife Refuge. The area is not yet open to the public.

King and Rappahannock Indian Chief Anne Richardson say the stunning view helps to make sense of the crystals, hand-etched pieces of glass and other artifacts discovered in this area along the cliffs.

“Stand there and you can’t help but feel and see that this is a very spiritual place,” said Richardson, taking in the land that both the tribe and this archaeology team from St. Mary’s College in Maryland believe is near where a Rappahannock Indian village existed, and a spot where an individual named Indian Peter may have lived. “It’s a place where a connection would have been made with the spirit realm, a place the tribe may well have used for ceremony.”

King, an anthropology professor who’s been working for several years now with the Rappahannock Tribe on a project called “Indigenous Borderlands of the Chesapeake,” says her team is now focused on doing historical archaeology to find spots where Native American villages existed along the river. Learning more about historically noted figures like Indian Peter is also a goal.

“Archaeology can’t prove anything definitively, but the evidence we’ve found points to and supports the fact that this may well be where Indian Peter lived in the period from 1700 to 1730,” said King, who said a discovered will indicated that in 1697 the one-time slave was due to be freed in 1699. Initial research and theories have suggested that Peter may have been a descendant of Native American villagers who lived along Totuskey Creek in Richmond County.

King notes that an earlier round of exploration on the Fones Cliffs site was funded by the Conservation Fund, while this year’s two weeks of digging and exploration were paid for by the refuge, which last year acquired the tract that had been considered for development.

“The refuge wants to know more about this tract’s Native American history,” said King, noting the refuge and others interested in seeking archaeological clues feel a sense of urgency because land near the edge of the cliffs continues to be lost to erosion.

“Some of the artifacts we have in the collection were found by the staff of the refuge, the most interesting being crystals discovered from eroding earth of the cliffs,” said King, who echoed Richardson’s comments that Native Americans placed great spiritual significance in crystals and used them in rituals and ceremonies.

The archaeologist said other artifacts found this summer include Colonial-era ceramics of English and German origin, a copper buckle, a collection of nails and some other pieces of copper that may have been produced from deposits that exist in the area.

But the discovery that made King’s face light up is a piece of glass, probably the stem of a wine glass, that she and others on her team believe was skillfully prepared to give it glistening facets.

“This is amazingly intricate work, a beautiful flaking job, very fine, detailed and precise work,” she said, noting the item will be more closely examined back in the archaeology lab at St. Mary’s. “It was found in the same area where the crystals were. It seems to be the stem of a wine glass that was worked to look like a crystal.”

King said it makes sense that Colonial artifacts were found among the Native American artifacts in their excavations, as Peter and his family were likely to have come to the site with an array of items from his time as an enslaved individual and the time that followed.

And she said while her team of researchers and archaeologists will continue to pursue other records that could prove that Peter lived on this site, “It’s hard to find tax records of ... people who didn’t have money and means. They often don’t exist in the records except as property.”

One thing that gives credibility to the Indian Peter story: a creek that’s close, now known as Garland Creek, shows up on earlier maps as Indian Peter Creek.

King said the big push along the Rappahannock will continue to be finding the three large villages that exist in both the tribe’s oral histories and in Capt. John Smith’s account of coming up the river in 1608.

She said the ability of the team of students, paid archaeologists and staffers from St. Mary’s to find important artifacts often depends on getting access and permission to do archaeology on privately owned land. Chief Richardson said private landowners who do allow the team access can keep the artifacts that are found after they are photographed and studied to help piece together history. Earlier GIS work done by the St. Mary’s group—mapping places with a series of attributes Native Americans would have wanted for their settlements—has jibed well with locations from the tribe’s oral histories, she said.

“We’re thrilled that this work is happening,” she said of this summer’s efforts and others done by the team at St. Mary’s. “We see it validating all the things we thought and now we will have evidence of. It furthers our goals of being able to recover our history and restore it to the tribe, something that’s ongoing.”

The chief, who’s now overseeing the creation of new infrastructure and programs now that the Rappahannock Tribe has been federally recognized, believes this likely home of Indian Peter is probably fairly close to a Rappahannock Tribe village thought to be near Garland Creek.

She said villages were often known by the name of their chief at the time—the Native American word was Weroance. And she pointed out that the sprawling Beverly Marsh across the river from Fones Cliffs is where members of her tribe in 1608 initially hid from Smith as he came up the river, unsure of the explorer’s intentions.

As for the two weeks of sweat and toil at Fones, St. Mary’s student Sarah Kifer said the heat was a challenge, though she and the others working on the dig were glad to get permission to do it in the midst of the pandemic. They distanced, sanitized often and wore masks while digging down into packed earth and sifting soil through screens.

“There was one other small advantage to wearing masks,” Kifer said. “They filter the dust out of the air we breathe while we’re sifting and digging.”

Copper buckles, glasswork and pipe stems are among items unearthed during an archeological dig on Fones Cliffs.