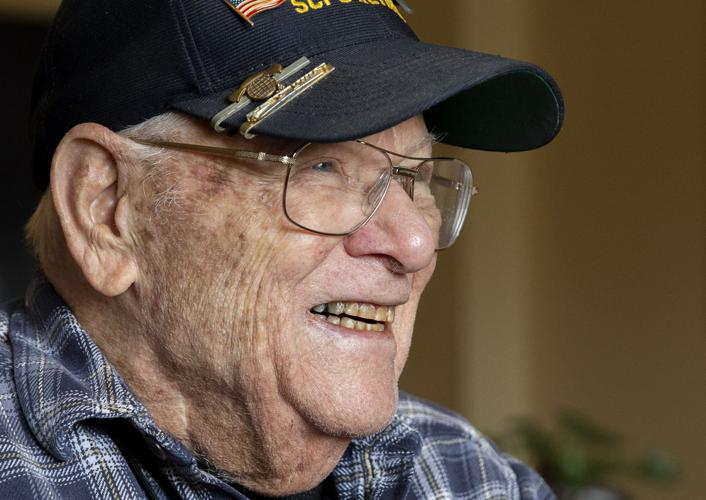 Miller ‘always has a smile on his face and is easy to please,’ said Gail Ford, Paramount’s activities manager. 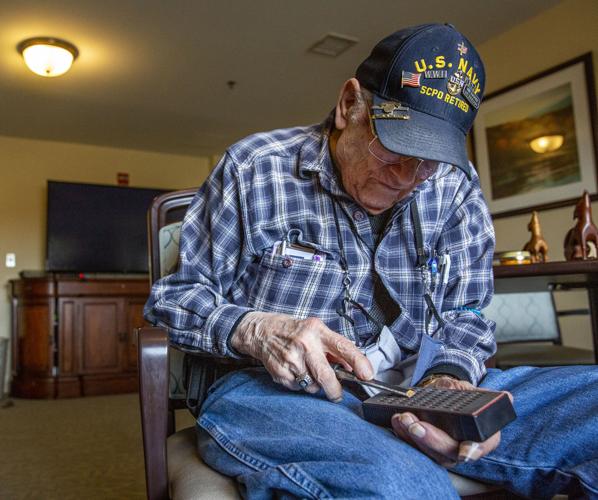 Vincent Miller sharpens a tool on his diamond hone at Paramount Senior Living in Fredericksburg. He spends hours making tiny, detailed carvings that he sells or gives away as a token of goodwill. 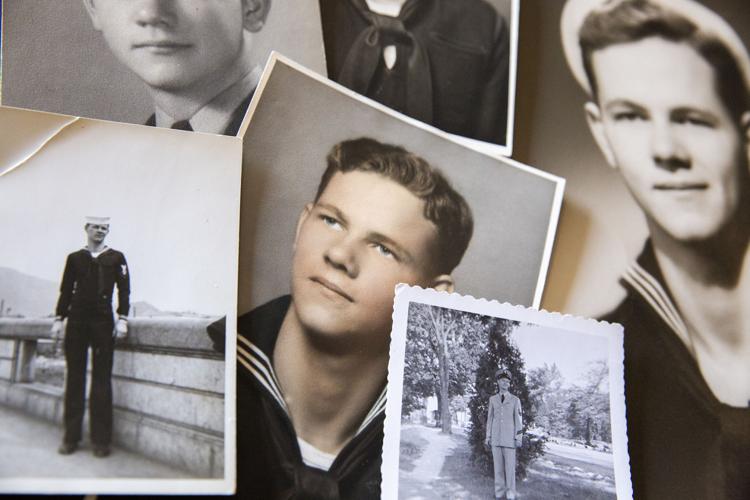 Vincent Miller was 16 when he joined the Navy during World War II. His mother had to sign for him to be able to enlist. 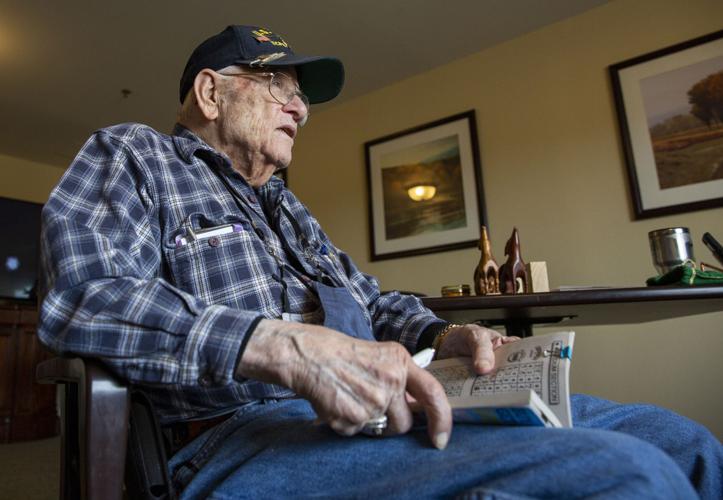 Vincent Miller usually keeps at least two Sudoku books in the tote bag he carries with him. 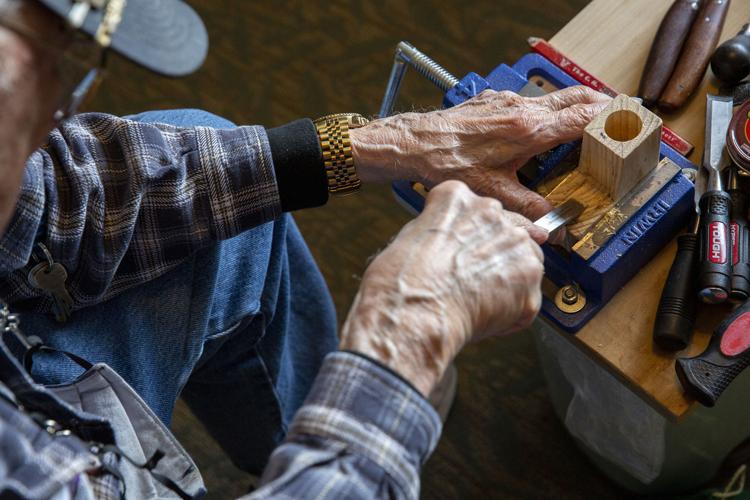 Miller prefers working with clear cedar but will take whatever he can get, including this piece of spruce, which is hard and difficult to chisel.

Was it his service during three wars and the need to learn about various electrical systems on ships that made Vincent Lawrence Miller’s mind so sharp—and kept it that way—all these years later?

Or was it his time as a Boy Scout leader, when he took to heart the motto, “Be Prepared?” He’s always outfitted with various pocket knives, nail clippers and pens with different tip sizes—and he knows how to use them.

At 94, Miller, whose family calls him Vince, continues to keep his hands and mind active. As a resident of Paramount Senior Living at Fredericksburg, he’s carved out several niches for himself, including being known for his wooden whittlings, his competitiveness in weekly trivia tests and his ability to complete expert-level Sudoku number puzzles in ink.

“Is there any other way?” he quipped, reaching into his shirt pocket and clicking a fine-tipped pen for emphasis.

The other critical element of his daily grooming is a black Navy hat that denotes his service in World War II, Korea and Vietnam. He’s most proud of the yellow capital letters, front and center, that designate him as a senior chief petty officer, retired.

“Our mother was very proud of him and all he accomplished,” said Bobbe Spicer, his half-sister who is 23 years younger. “When Vince entered the war, she had to sign for him and I remember her saying that was very hard for her. He was her baby.”

Miller was 16 in 1943 and a senior in high school in Bridgeport, Conn., when he joined the service. He purposely picked the Navy because he liked the appeal of a ship with warm bunks and three square meals a day.

“I didn’t want to be digging foxholes and freezing to death here and there,” he said.

Because he was underage, he was sent to boot camp and then training schools where he learned skills that lasted a lifetime. He focused on electrical work and interior communications such as intercoms, public address systems and magnetic tapes. He even worked on machines that recorded planes landing on aircraft carriers so pilots could review the tapes and correct their mistakes.

“They did a fine job of keeping your mind going,” he said, smiling when asked if that’s why he’s still sharp. “You might say that, considering my young age.”

Miller recalls more about assignments during the waning months of World War II than during the later portions of his 23 years of service. He spent time on aircraft carriers and ships with landing craft infantry rockets. Although members of the Viet Cong were known to drop grenades on ships at all hours of the night during the Vietnam War, Miller never got close enough to the action to be in harm’s way.

Asked if he was glad or disappointed by that, he said: “A little bit of both.”

Then, he shrugged his shoulders and added: “It was service. You didn’t give it a thought. I served and it kept me away from home a lot, but oh what fun when I was at home.”

He credits his “supportive wife of 70 years,” Glenna Peasley Miller, for taking care of things at home, including their three sons and one daughter. The couple visited 46 states in their motor home after both retired. She worked for the Fairfax County Police Department and after military service, he did electrical projects as a civilian at Walter Reed Hospital, various Army bases and the Pentagon.

She died five years ago and while she was in a facility, Miller faithfully visited her every day, his sister said. The veteran then lived with his son in Fairfax until he broke his hip and shoulder and moved to the assisted-living facility in Spotsylvania County.

He brought as many woodworking tools with him as Paramount would allow. For liability reasons, the facility had to draw the line at power tools, said Gail Ford, activities manager.

But Miller kept his cache of chisels and elf-size hammers, homemade knives and a diamond hone sharpener to keep the whittling tools on point. Spicer’s husband, Bill, cuts standard 2x4s into manageable chunks and devised a portable vice that holds each block in place.

The rest is up to Miller. He has even more chisels than pens, and the sharp tools are stored in green bags that once held Crown Royal. The whiskey is such a part of his routine that his son made sure his “prescription” for 1.5 ounces a day was written into his medical records.

He has a drink each evening, mixed with root beer, lemon juice and five ice cubes.

When he’s in the building, Miller is either carving a coyote howling at the moon or, as he did before Christmas, completing orders for work boots. Small enough to fit in the palm of a person’s hand, the boots look like they belong to the elf whose hammer he uses. They’re detailed down to the tiny nail holes along each side and tread on the bottom.

He can spend up to 60 hours on one boot.

He gives away some of the carvings—like a coyote he made for the nurse who took such good care of his wife. Others he sells for $60 to $100 each.

And if that doesn’t keep him busy enough, he sets his mind on winning ribbons in the weekly trivia games. Whether it’s filling in the missing word in a name—think Hans Christian Anderson or Camilla Parker Bowles—or identifying what product goes with a particular brand, Miller regularly scores high on the games. And of course, he writes his answers in a flowing cursive script.

“We give out ribbons to those who have the best score, and he is working for the ribbons. I’m sure he’s won lots of them,” said Ford, who also admires his ability to set and meet deadlines. “He has purposes and he completes his purposes every day.”

In addition, he comes to regular resident meetings—not to complain, but to point out the good job that staff members do.

“He’s such a sweet man,” Ford said. “Everybody loves Vincent. He just sparkles.”

Memories of World War II are disappearing as an average of 234 veterans from the era die every day, according to the U.S. Department of Veteran Affairs.

Of the 16 million men and women who served during the Second World War, 240,329 remain alive, according to the VA, which updates its projections each September. Based on those numbers, Virginia has 5,180 surviving veterans, according to the National World War II Museum in New Orleans.

Publix grocery store to be built on Route 3 in Spotsylvania

A new shopping center anchored by a Publix grocery store is coming to Spotsylvania County.

Three people wanted by police were arrested Tuesday following two simultaneous barricade situations at opposite ends of Spotsylvania County, a…

Spotsylvania detectives are investigating an incident last week in which a county man was brutally beaten and robbed of various items, includi…

Travelers in the Fredericksburg area can expect heavy congestion during the evening commute.

Spotsylvania authorities were busy Tuesday evening with unrelated barricade situations in opposite ends of the county.

A 39-year-old Spotsylvania County man was killed early Thursday when he lost control of his motorcycle and crashed, police said.

A privately owned construction and development corporation has acquired the historic Goolrick’s Pharmacy on Caroline Street in Fredericksburg.

A motorcyclist was killed in a crash early Thursday in Fredericksburg, police said.

A raging fire destroyed part of a Fredericksburg retirement community late Monday, but no one was hurt, officials said.

White House hits back at inflation criticism from Jeff Bezos

White House hits back at inflation criticism from Jeff Bezos

Miller ‘always has a smile on his face and is easy to please,’ said Gail Ford, Paramount’s activities manager.

Vincent Miller sharpens a tool on his diamond hone at Paramount Senior Living in Fredericksburg. He spends hours making tiny, detailed carvings that he sells or gives away as a token of goodwill.

Vincent Miller was 16 when he joined the Navy during World War II. His mother had to sign for him to be able to enlist.

Vincent Miller usually keeps at least two Sudoku books in the tote bag he carries with him.

Miller prefers working with clear cedar but will take whatever he can get, including this piece of spruce, which is hard and difficult to chisel.