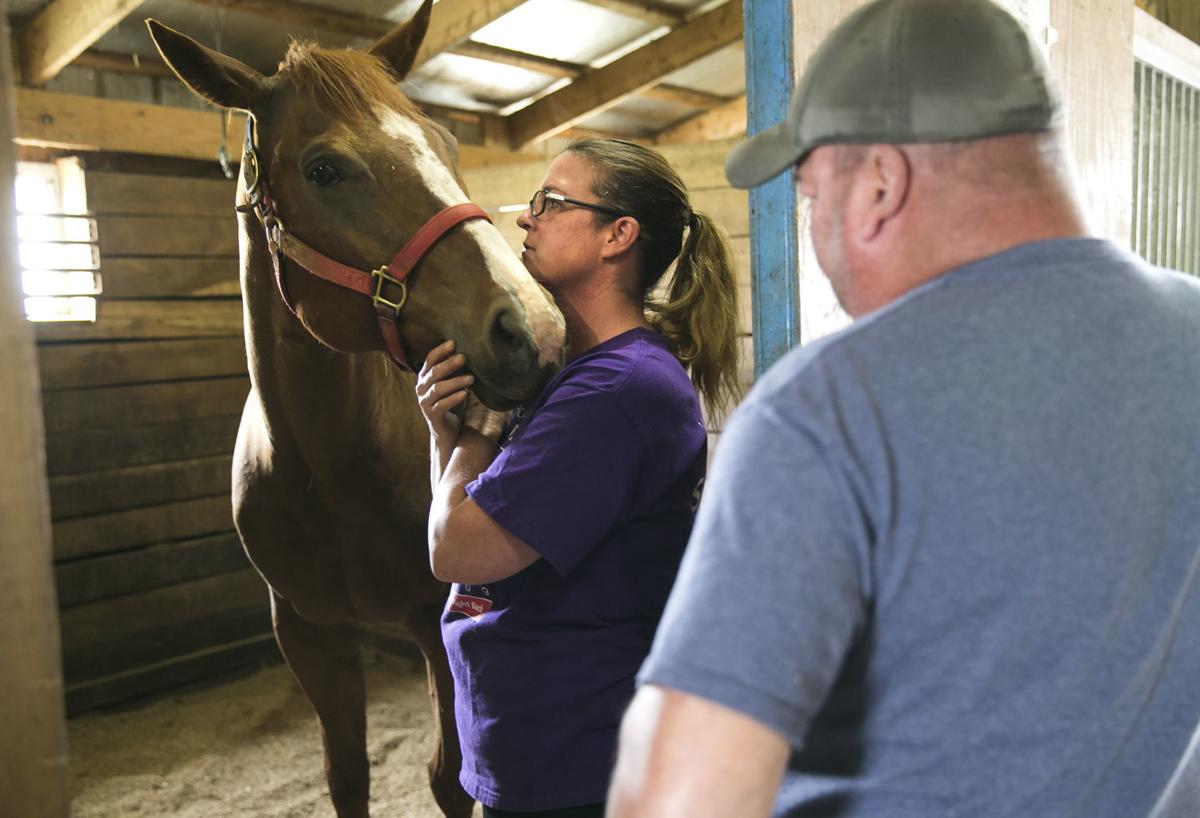 Tacy Moore calms Scarlett prior to a vet visit as Brad Burton watches at LaGrange Farm in King George County. The couple is working to rebuild the farm that’s been in Burton’s family for more than 100 years. 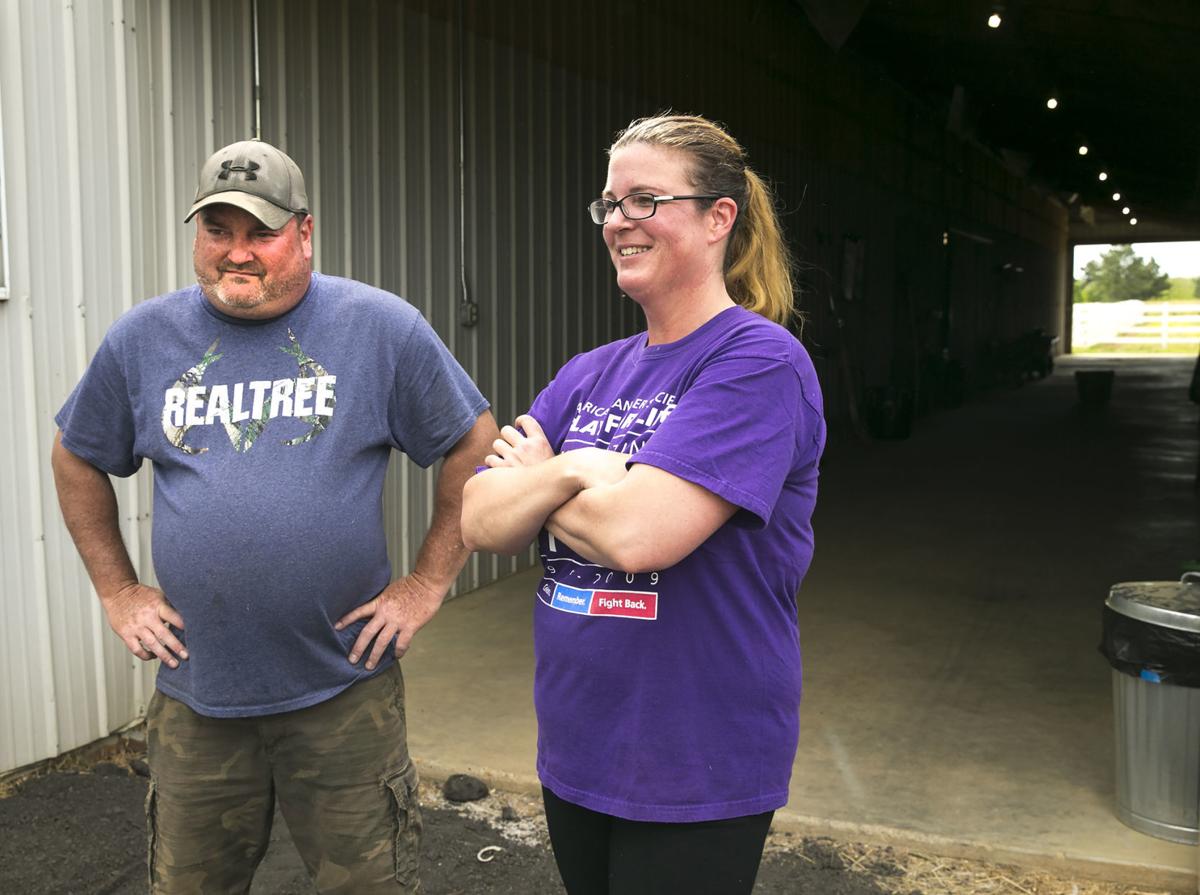 Brad Burton and Tacy Moore talk about some of the projects they intend to tackle on the farm. 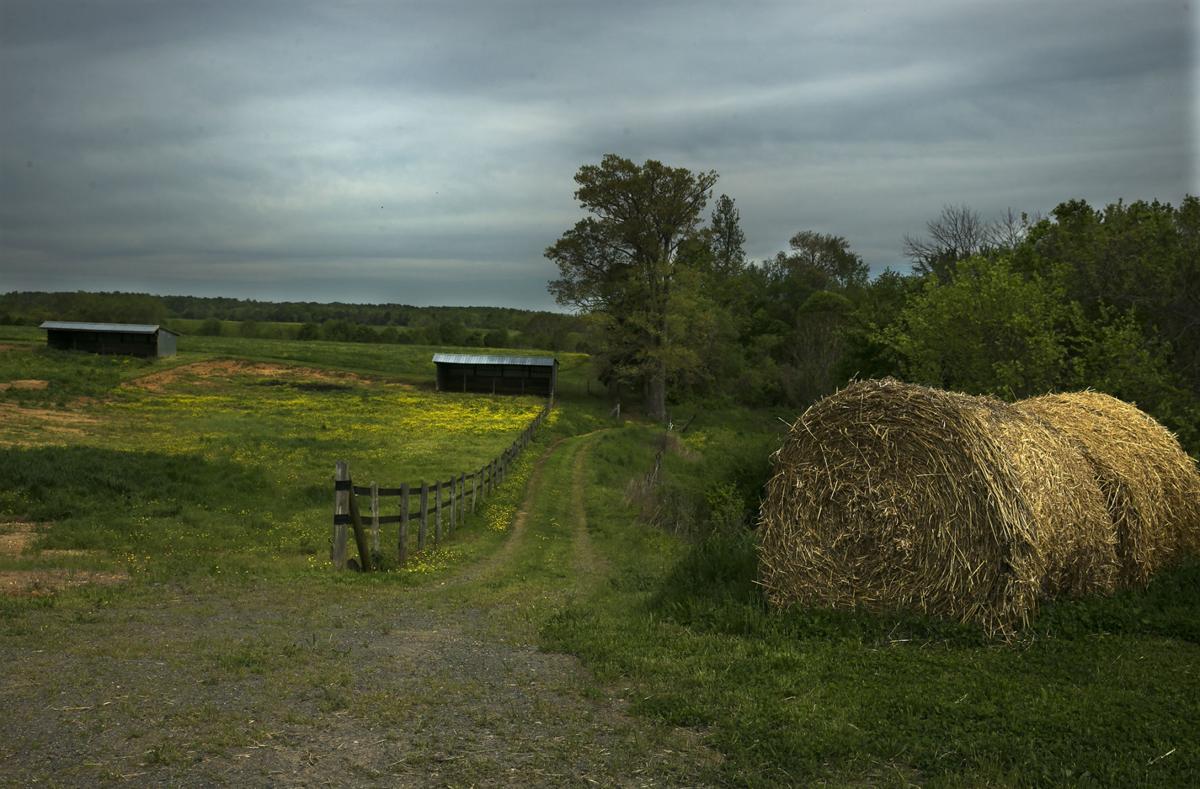 LaGrange has about 130 acres with pastures, woods and a creek running through it. 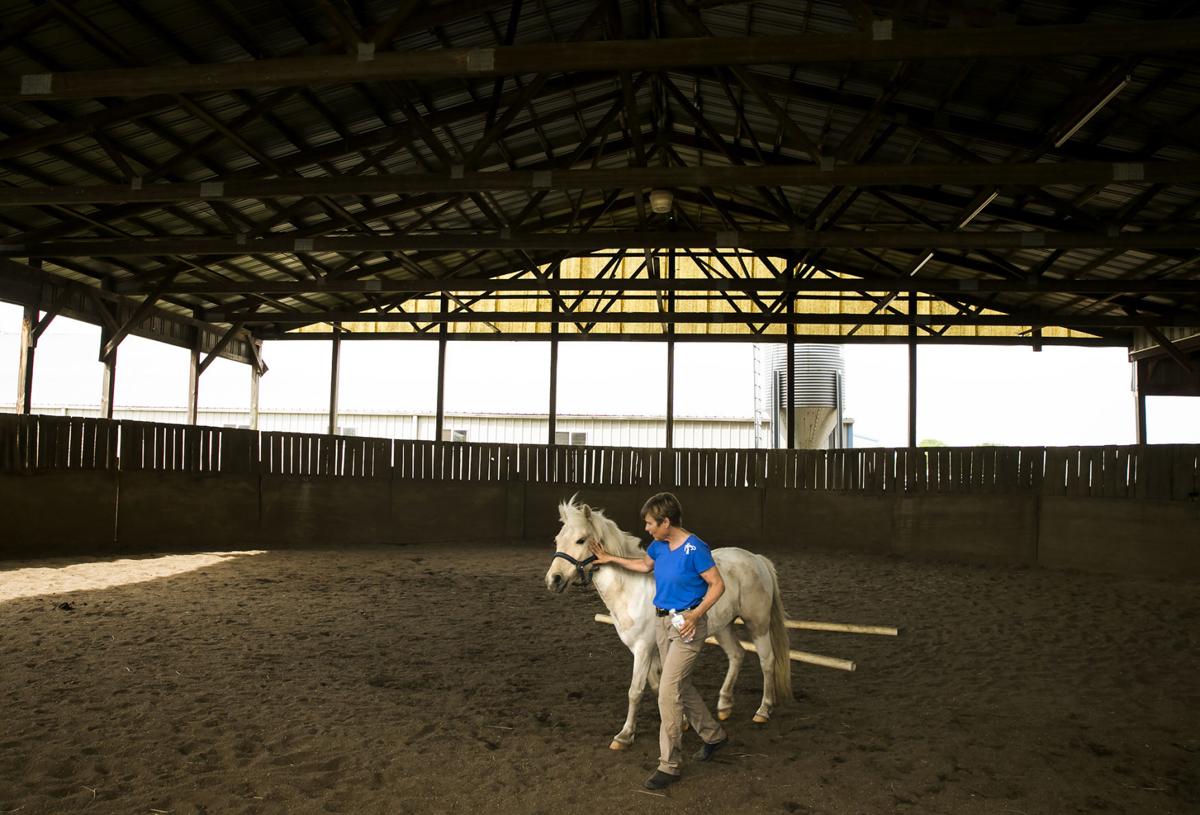 Pam Bramell walks Misty in the round pen at LaGrange. Bramell rents space on the farm to operate Hope Reins Ranch, a ministry she started for at-risk children and adults. 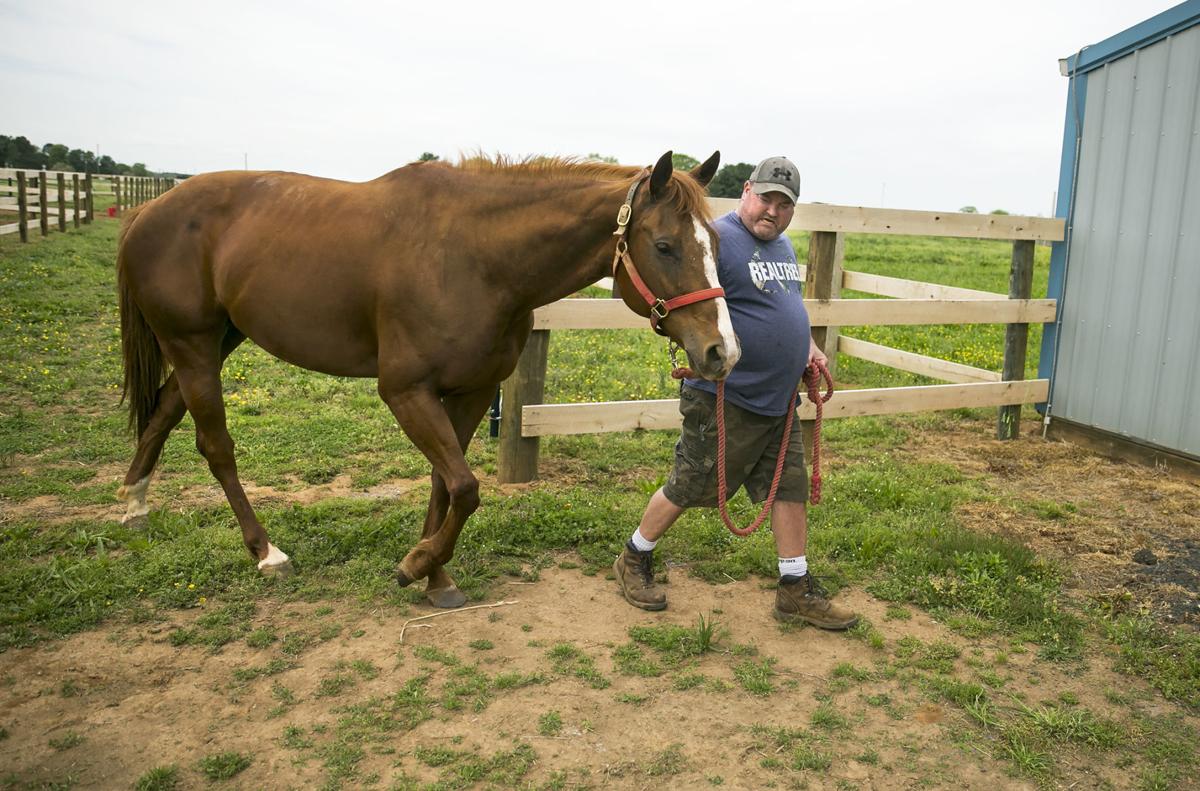 Brad Burton walks a horse into a barn. He likes horses, but prefers to keep his feet on the ground. 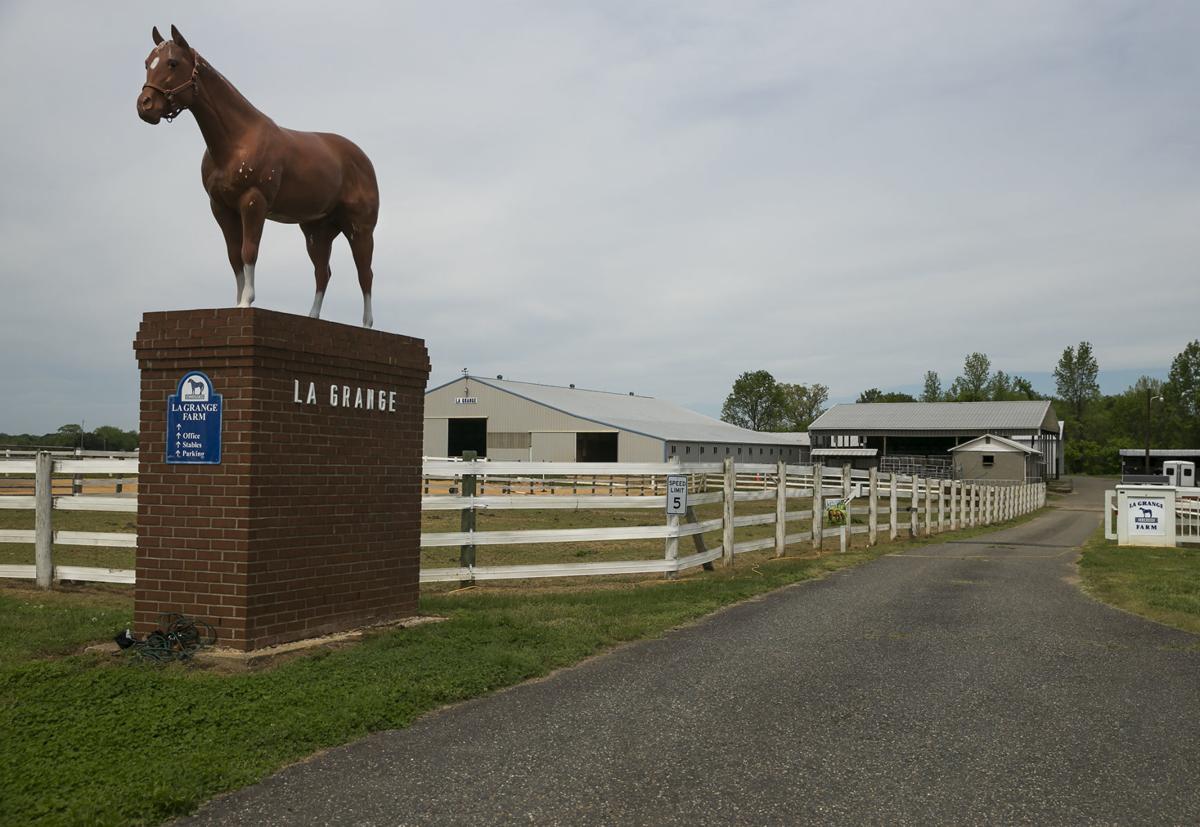 LaGrange Farm sits on State Route 3 in King George County, and stands out because of the horse statue at the entrance.

Members of the Purks family once more have taken over the reins of LaGrange Farm, which has been part of the King George County landscape for more than a century.

The 130-acre facility on State Route 3—the one with the horse statue out front— has never been owned by anybody but Purkses, but it had been rented out for the last decade. Fences weren’t mended or pastures tended, and things fell into disrepair.

Brad Burton and his partner, Tacy Moore, are champing at the bit to reverse the decline. He’s the grandson of the late Warren Purks, a former county revenue commissioner who owned the property until his death in 2006. He had a reputation for hard work and horse sense, and his grandson remembers how he labored from dawn to dusk to keep the farm looking good.

He wants to continue that legacy.

“It’s the family farm, and I don’t want it going away,” Burton said. “I guess that’s the best way to say it.”

His parents, Wayne and Ethel Burton, have shoveled retirement funds into the property, and he and Moore have put in money, as well, for a total investment close to $100,000, Moore estimated. She works full time at the NSWC Credit Union—and helps on days off and evenings—while he’s become the day-to-day manager.

“It’s all totally family now,” his mother said, adding it’s been such an emotional transition that she has trouble putting it into words. “Brad thought the world of his Pop-Pop, and he learned so much from him. It’s been his dream to do this, and he’s happy as can be.”

So is she. The daughter of Warren Purks, she’s certain her father would be pleased to see his grandson working so hard, partnered with a woman who loves horses.

“The farm looks like it’s alive again,” she said.

Charles T. Purks first owned the farm more than 100 years ago, and his holdings ran from the Rappahannock River to the shores of the Potomac. In 1932, he sold LaGrange to his son, Robert B. Purks, who ran a store and post office in the nearby community of Igo.

Warren Purks gave both his children land, on the other side of a field next to the main barn, for their homes, and both built brick ramblers that front Bloomsbury Road.

When Warren Purks died, his will spelled out the future of LaGrange. Bob Purks would own it until his death—which came in August 2018—then the property would pass to Ethel Burton. Because Warren’s widow is still alive—she’s 98—both she and her daughter have lifetime rights.

Upon their deaths, the farm will pass to the grandchildren—and then and only then can it be sold, according to the will.

Brad Burton doesn’t dwell on what may happen in the future; he’s got too much grass to cut. As he walked through the 21-stall barn, he said there’s always a breeze blowing on the property, which also has a creek running through it.

He likes horses—most days—but says he prefers to keep his feet on the ground. He’s like his mother in that way; she, too, prefers to “love on them” rather than sit atop them.

Moore grew up with horses, and she bought three for lessons when Brad Burton and his parents decided to refurbish the farm. Since last fall, they’ve worked on plumbing and electrical problems, repairing stalls and replacing dilapidated food and water troughs.

There wasn’t much activity from boarders when they got started, but spring has brought a resurgence in interest, both in the farm and among several groups that use the facility.

Carla Gardiner teaches lessons at LaGrange three days a week and leads a monthly 4-H club called King George Horsin’ Around. It’s for members who don’t own a horse—or may have never touched one—but would like the opportunity to do so.

She had worked with the group from the time her daughter, who’s in college, was young, and there hadn’t been a lot of activity in recent years. But 22 kids have signed up for the chance to come to monthly club meetings at LaGrange, where they’ll learn how to groom a horse and eventually sit in a saddle.

Gardiner, who rode at the farm as a kid, is thrilled to see it blossom again.

“When it did kind of lose its foundation, it was hard seeing it go downhill,” she said. “Every day it’s getting better and better. Brad and Tacy are putting their whole hearts into it, trying to bring it back to what it used to be.”

Waldon Jue of King George is president of a local chapter of the Old Peoples’ Riding Club. The 38 members ride under the banner of “Still Hot to Trot” and already have used LaGrange for a club clinic. He’s looking forward to more opportunities.

“We’re delighted to see them invest in the farm and continue keeping it in operation because it’s a wonderful asset,” he said. “The entire operation looks like it has a lot of synergy between a lot of groups, all horse-related, so that gives us an opportunity to work with different types of groups.”

Richard “Buddy” Payne, who lives across from LaGrange, said he already knew what great neighbors the Burtons were—always willing to help with any need. He’s glad to see the family’s farm buildings and fields kept neat again.

Robert Marshall, 78, remembered when Warren Purks tended a large garden and shared its bounty with others. He had been sad to see the results of his efforts deteriorate in recent years, but he’s glad the Burtons and Moore are running on a different track.

“With the big barns and the horse statue out front, I’m used to it being a horse farm,” Marshall said. “Now seeing the horses back, it’s just good to see.”

Pam Bramell rents a corner of LaGrange Farm for a nonprofit called Hope Reins Ranch. She said she felt called to offer a ministry to at-risk youth or adults who suffer from stress or anxiety or have been abused or bullied.

She invites them to come inside the red-fenced area and work with the rescued horses, who have similar backgrounds of neglect or abuse.

There’s no charge, and she’s looking for those who need the non-judgmental therapy that loving horses can provide—as well as those who’d like to help with all aspects of the animals’ care.

Bramell has one pony, two miniature horses and three horses she’s saved from slaughter or neglect. Some have physical disabilities; others, like a horse she named Job, suffered from mistreatment. His halter bore into his hide to the point it left a white outline on his face and no hair between his ears. A standardbred, an American horse best known for its harness-racing abilities, Job was skin and bones when Bramell got him. He’s gained at least 250 pounds from having proper nutrition.

Hope Reins relies on donations for its barn rental and horse feed. It’s launching a fundraising campaign called “40 for 50,” in which 40 people commit to a monthly donation of $50 to cover costs. More information is available by emailing Bramell at hopereinsva@gmail.com or on Facebook under Hope Reins Ranch Virginia.

Watch Now: Should my kid get the COVID vaccine?

FREDERICKSBURG AREA WEATHER: Is snow on the way?

A more active pattern will dominate this week’s weather in the Fredericksburg area.

Residents are upset about the increases and elected officials aren't happy with the way information was presented.

Tacy Moore calms Scarlett prior to a vet visit as Brad Burton watches at LaGrange Farm in King George County. The couple is working to rebuild the farm that’s been in Burton’s family for more than 100 years.

Brad Burton and Tacy Moore talk about some of the projects they intend to tackle on the farm.

LaGrange has about 130 acres with pastures, woods and a creek running through it.

Pam Bramell walks Misty in the round pen at LaGrange. Bramell rents space on the farm to operate Hope Reins Ranch, a ministry she started for at-risk children and adults.

Brad Burton walks a horse into a barn. He likes horses, but prefers to keep his feet on the ground.

LaGrange Farm sits on State Route 3 in King George County, and stands out because of the horse statue at the entrance.