Virus update: Fauci agrees 'right on the spot' to serve Biden; Thanksgiving travel numbers are in

King George man drives 60 miles, one way, to get DMV service
6 comments
Share this
{{featured_button_text}}
1 of 2 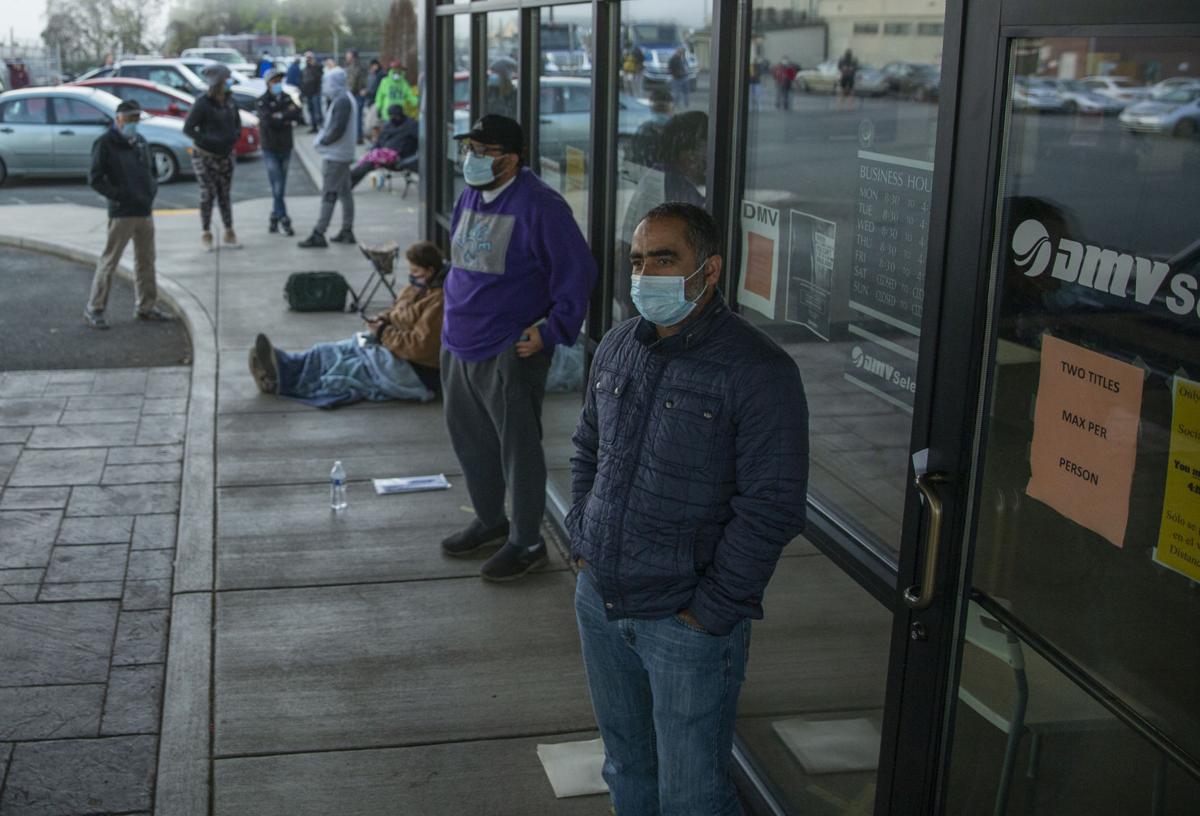 Najib Khilwatgar (right, in mask) arrived a few minutes before 5 a.m. to wait for the DMV Select in Orange, Va. to open at 8:30 a.m. on Tuesday, Oct. 20, 2020. Other DMV facilities are open by appointments only, and the Orange Select will begin limiting entrance to 75 customers per day. 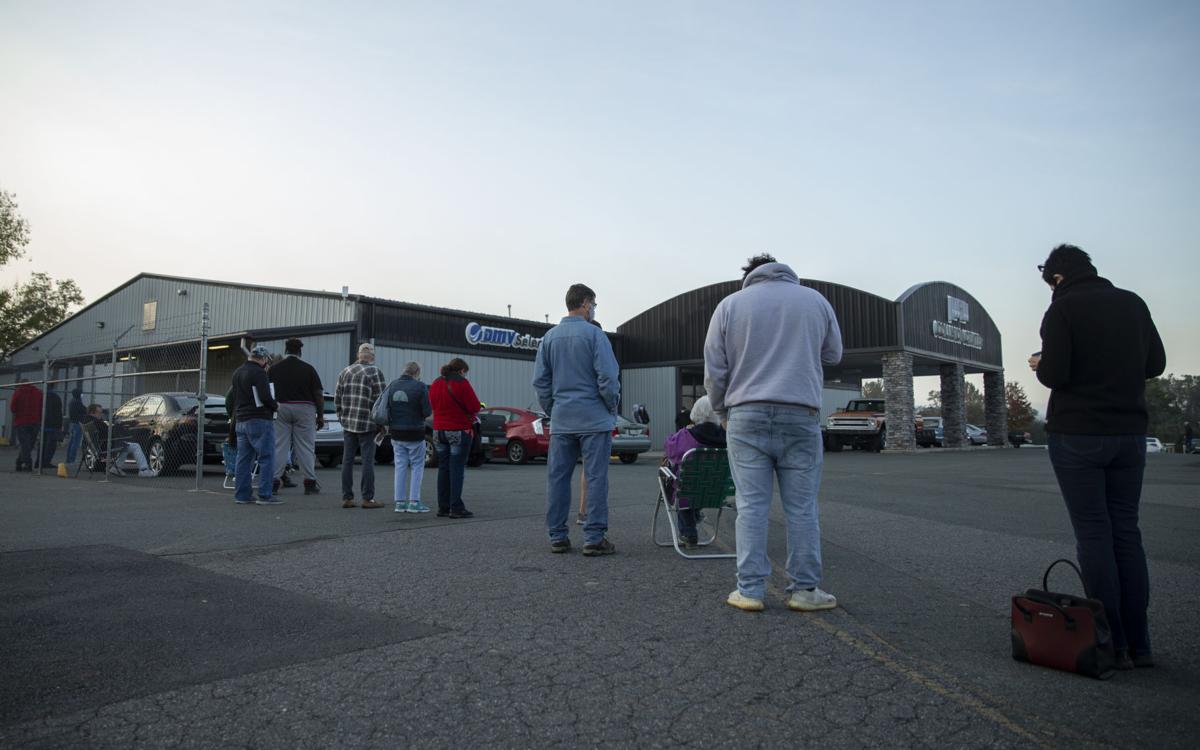 Customers wait outside the DMV Select in Orange, Va. on Tuesday, Oct. 20, 2020. Appointments are need at other facilities, and many sites are booked three months ahead.

Buying a car was the easy part; getting it properly registered in the midst of a pandemic took James Barrett of King George County on a long and winding road.

He would emphasize the “long” part of it, for sure.

The retired soldier, who’s spent almost 45 years in the service and government work, started looking on Friday for a way to get the new title, tags and registration for the fire-red 2005 Ford Mustang he bought from his neighbor. The transaction can’t be completed online, and since Virginia Division of Motor Vehicles sites shut down in the early days of COVID-19 and have reopened in phases, the facilities are taking customers by appointment only.

He went online and started looking at available openings, everywhere from Tappahannock to Massaponax, from the DMV Select in King George to DMV Mobile-Go sites in the region.

No appointments were available, anywhere, for the rest of October. Or November. Or even December. The earliest appointment Barrett could find was Jan. 5.

“It was really ridiculous,” he said. “What’s [my car] going to do, sit here until January and not be used?”

A neighbor told him the DMV Select in Orange County was open on a first-come, first-served basis. Barrett had already taken a day of annual leave from his government job and thought, what the heck, he’d drive the 60 miles to get the help he needed.

“I was shocked to see around 75 to 80 people in line waiting to go into the DMV,” he said.

He drove home, fuming so much he called a TV station in Washington and the governor’s office in Richmond to complain. Then he made a plan to return Monday at “0-dark-30,” as the ungodly hours of early morning are often described by military people.

He left his home at 4:15 a.m., arrived in Orange 90 minutes later and found 10 people in line ahead of him. When the doors opened at 8:30, he guesses there were at least 60 people behind him.

“It was ludicrous, really,” he said. “I cannot tell you how many times I thanked the staff there to allow their office to be open without appointments, and there were people from all over.”

As Barrett waited, he chatted with others in the line, which circled the small building’s parking lot and occasionally blocked traffic at nearby businesses. He found he wasn’t the only one who’d driven through six localities or more to get there.

People had come from as far away as Williamsburg, Hopewell and various points in Northern Virginia. Some had been there once or twice before and hadn’t been seen.

Of the 51 DMV Selects in Virginia, 10 of them, including the one in Orange, are operating without appointments, said DMV spokesperson Jessica Cowardin. She said a list of those sites is available on the DMV website.

The message on the answering machine at the Orange Select spoke to the busy circumstances the workers are facing. It detailed what transactions could be made there and ended with: “Due to the volume of customers, we’re unable to answer any phone calls. We hope the above message will answer your questions.”

A DMV worker who stepped outside on Tuesday, when a Free Lance–Star photographer was taking photos, said the facility will start using a numbering system and limit customers to 75 per day.

James Barrett’s experience reflects what Cowardin described as “the new normal at DMV.” She said customers “love the appointment system once they are able to use it,” and several people had posted smiley faces about the experience. One wished DMV would operate by appointments only all the time.

The appointments are in high demand, Cowardin added, “so naturally we hear from customers who are having difficulty scheduling.”

The DMV website encourages people to complete transactions through email or online whenever possible. It states that it’s taken “every precaution in planning a thoughtful, phased approach to safely reopening,” and that appointments are required to minimize the number of people at DMV offices and testing sites.

The facilities closed as a result of the pandemic from March 18 through May 18, creating an obvious backlog. Gov. Ralph Northam last month acknowledged long waits faced by customers and gave Virginians another 60 days to renew their driver’s licenses, learner’s permits and identification cards, if they expired by the end of October.

DMV also gave most people who had driver’s licenses and ID cards about to expire the option to renew them online or through the mail instead of visiting a DMV site. Those credentials are for two years only, not the typical eight years.

The governor also encouraged customers to renew their licenses and registration online whenever possible. The DMV website, dmvNOW.com/appt, details which transactions can be completed that way and which require an in-person visit.

DMV is booking appointments for the next 90 days. A check of the schedule for the Spotsylvania County DMV in Massaponax showed that no appointments were available through the end of January—which is as far as the calendar goes—for popular transactions such as renewing driver’s licenses or new vehicle registration, which is what Barrett had done.

The DMV site encourages customers to check back regularly for appointments and says that more offices will be opened in coming weeks. Statewide, DMV is averaging almost 11,000 appointments during the weekday and almost 5,000 on Saturdays at 73 customer service centers and DMV Connect sites.

Barrett acknowledges that going to the DMV was never a joy ride, but “the bottom line was you knew you were in there, and you were eventually going to be seen. Now it’s impossible to get an appointment, and so you’re stuck.”

To make an appointment with the DMV, visit https://www.dmv.virginia.gov/general/#appointments.asp

Two cases in the Fredericksburg region, one with a false negative and the other, a false positive, demonstrate the uncertainties involved with a relatively new virus like COVID-19.

A propane explosion in the kitchen of a Caroline County restaurant Thursday afternoon sent three people to the emergency room, including one w…

Two regional Christmas parades will take place this weekend, both with stricter personal safety precautions as a result of the recent surge in…

The Spotsylvania Planning Commission is recommending that supervisors approve a rezoning to allow  a mix of apartments, offices and businesses in a section of the industrial park on State Route 2/U.S. 17.

A Maryland man was arrested Tuesday morning shortly after a burglary was discovered at a King George County business, authorities said.

The park will feature Wi-Fi and security cameras in the first phase of implementation of “smart” technology.

A 10-year-old hunter was shot in the forearm Saturday during a group hunt in Westmoreland County, according to the Virginia Department of Wild…

The increase in cases and the district's 99th death from COVID-19 are part of a trend that started over the weekend and is expected to continue in the wake of the Thanksgiving holiday.

GETTING THERE: U.S. 1 gets name change up north

Prince William County will change the name of U.S. 1 from Jefferson Davis Highway to Richmond Highway.

Najib Khilwatgar (right, in mask) arrived a few minutes before 5 a.m. to wait for the DMV Select in Orange, Va. to open at 8:30 a.m. on Tuesday, Oct. 20, 2020. Other DMV facilities are open by appointments only, and the Orange Select will begin limiting entrance to 75 customers per day.

Customers wait outside the DMV Select in Orange, Va. on Tuesday, Oct. 20, 2020. Appointments are need at other facilities, and many sites are booked three months ahead.