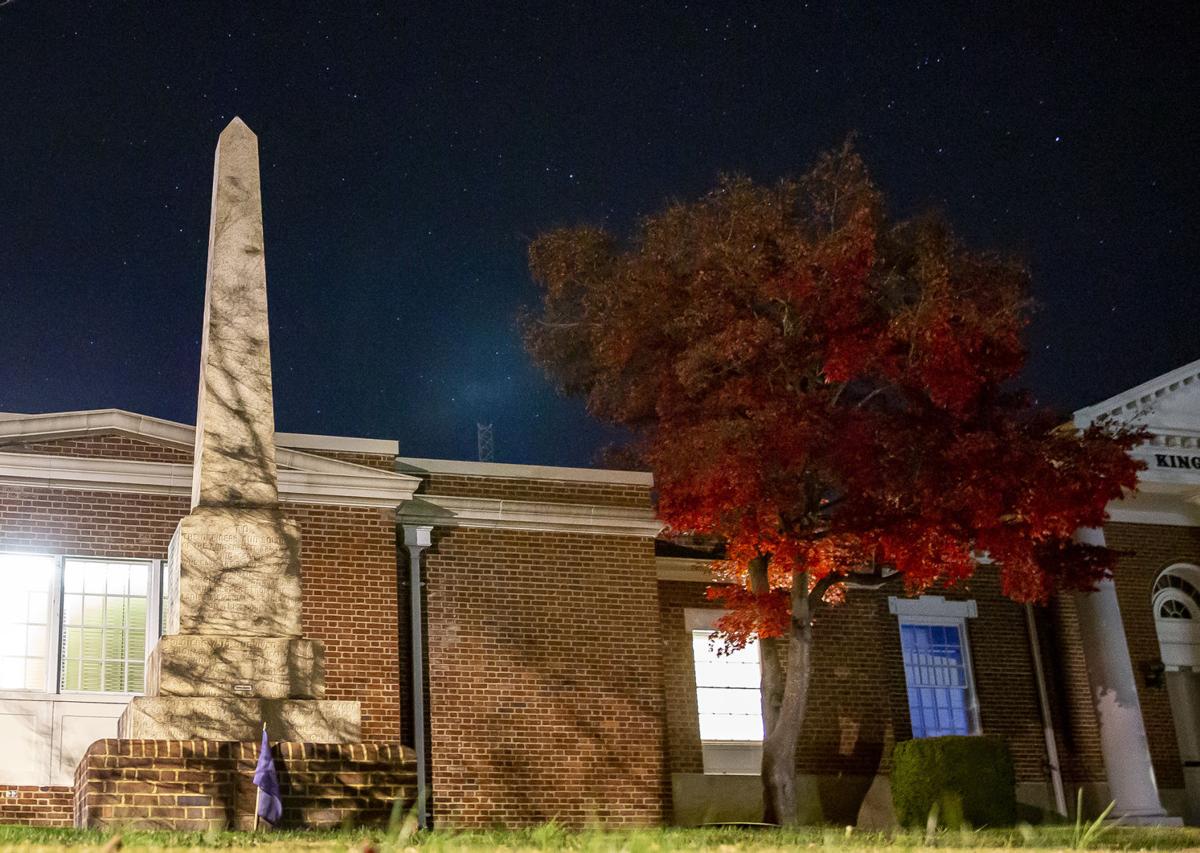 King George County Board of Supervisors voted 3-2 to remove a Confederate memorial from the courthouse lawn. 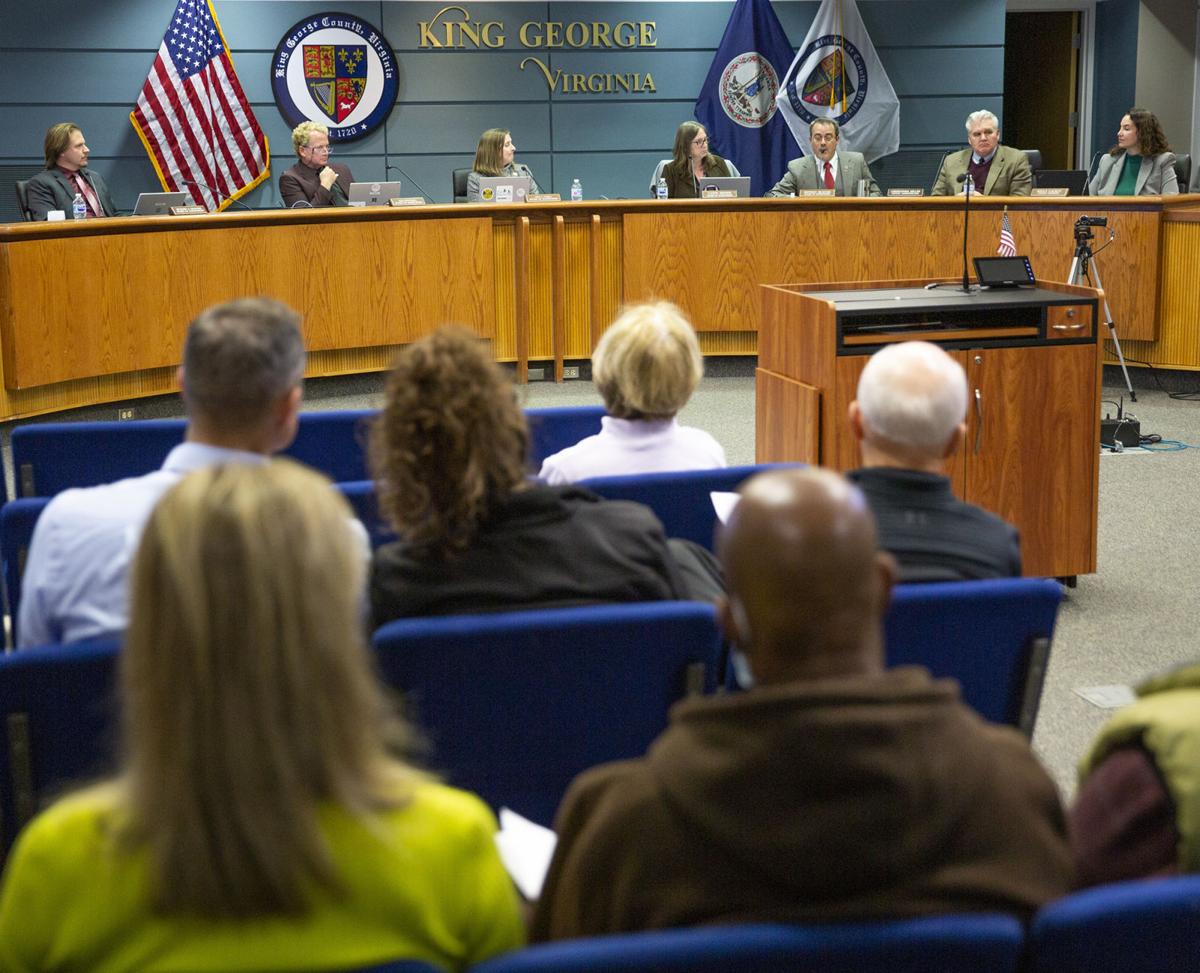 About 20 people attended the TRISTAN LOREI / THE FREE LANCE–STAR King George Board of Supervisors’ public hearing Tuesday on moving the Confederate memorial off county property. 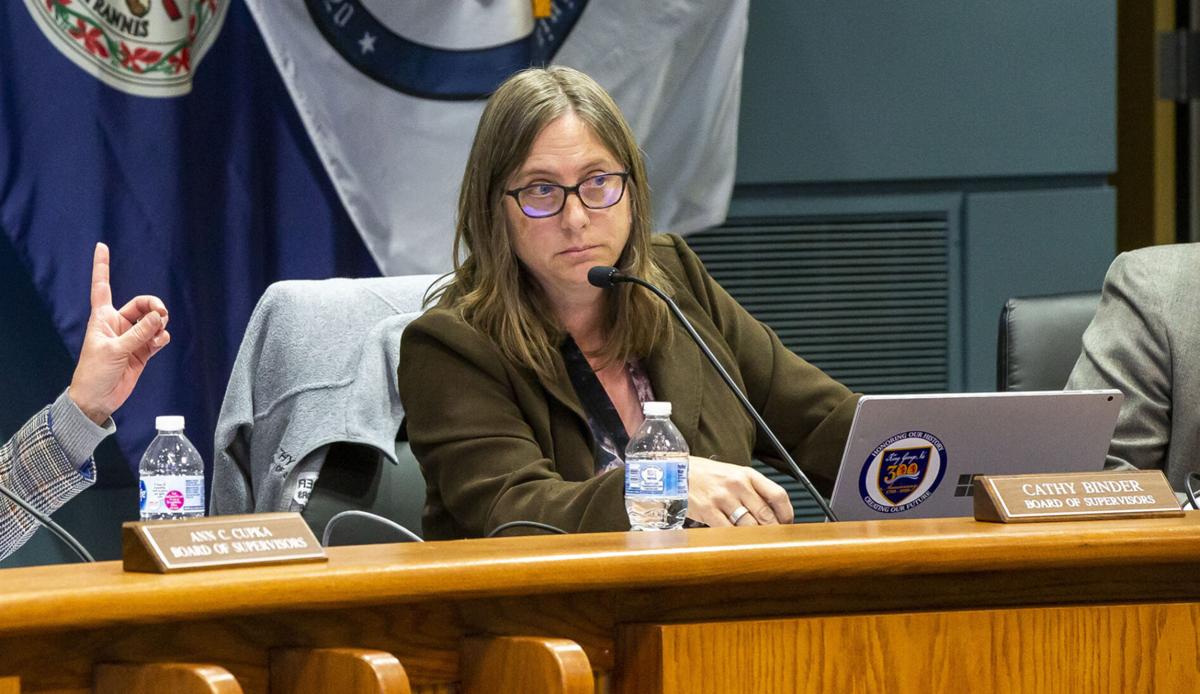 Supervisor Annie Cupka holds up a finger to Supervisor Cathy Binder as the two express different viewpoints about moving a Confederate memorial from the county courthouse lawn. 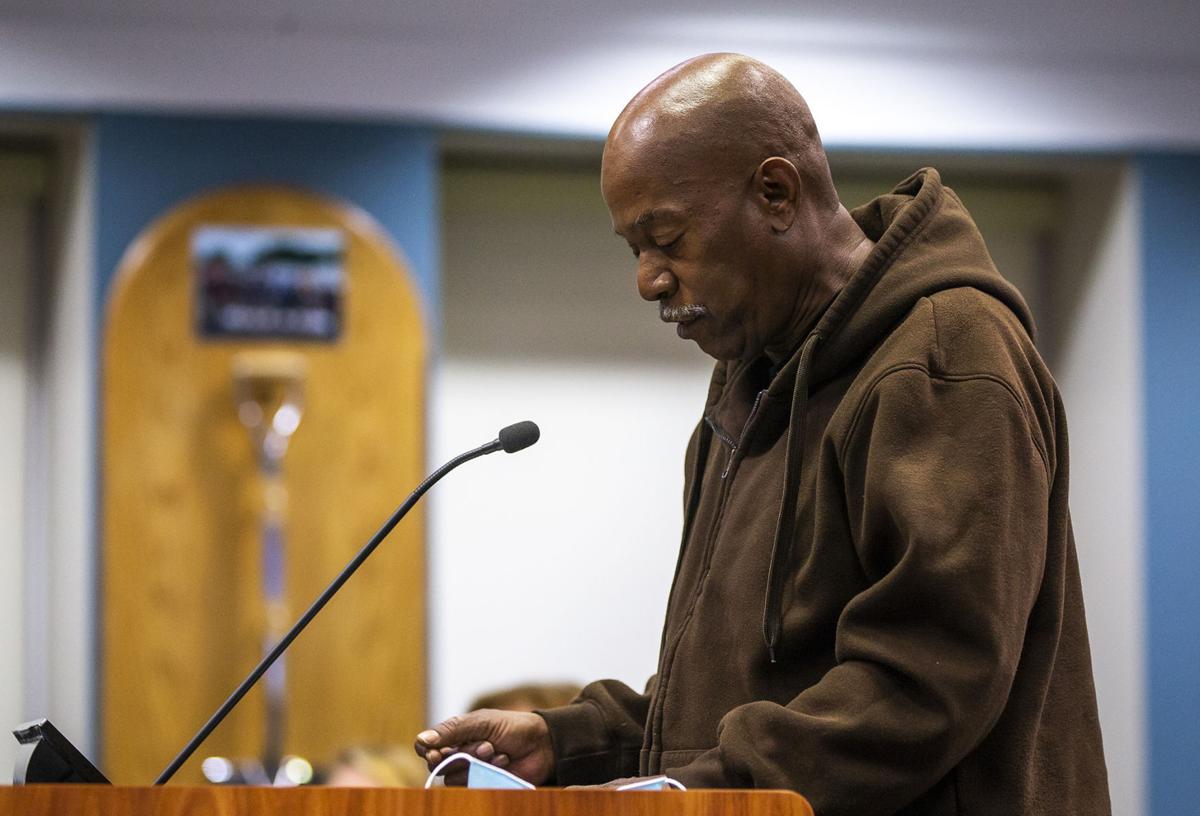 Robert Ashton, the vice president of the King George chapter of the NAACP, asks the supervisors to move the monument. 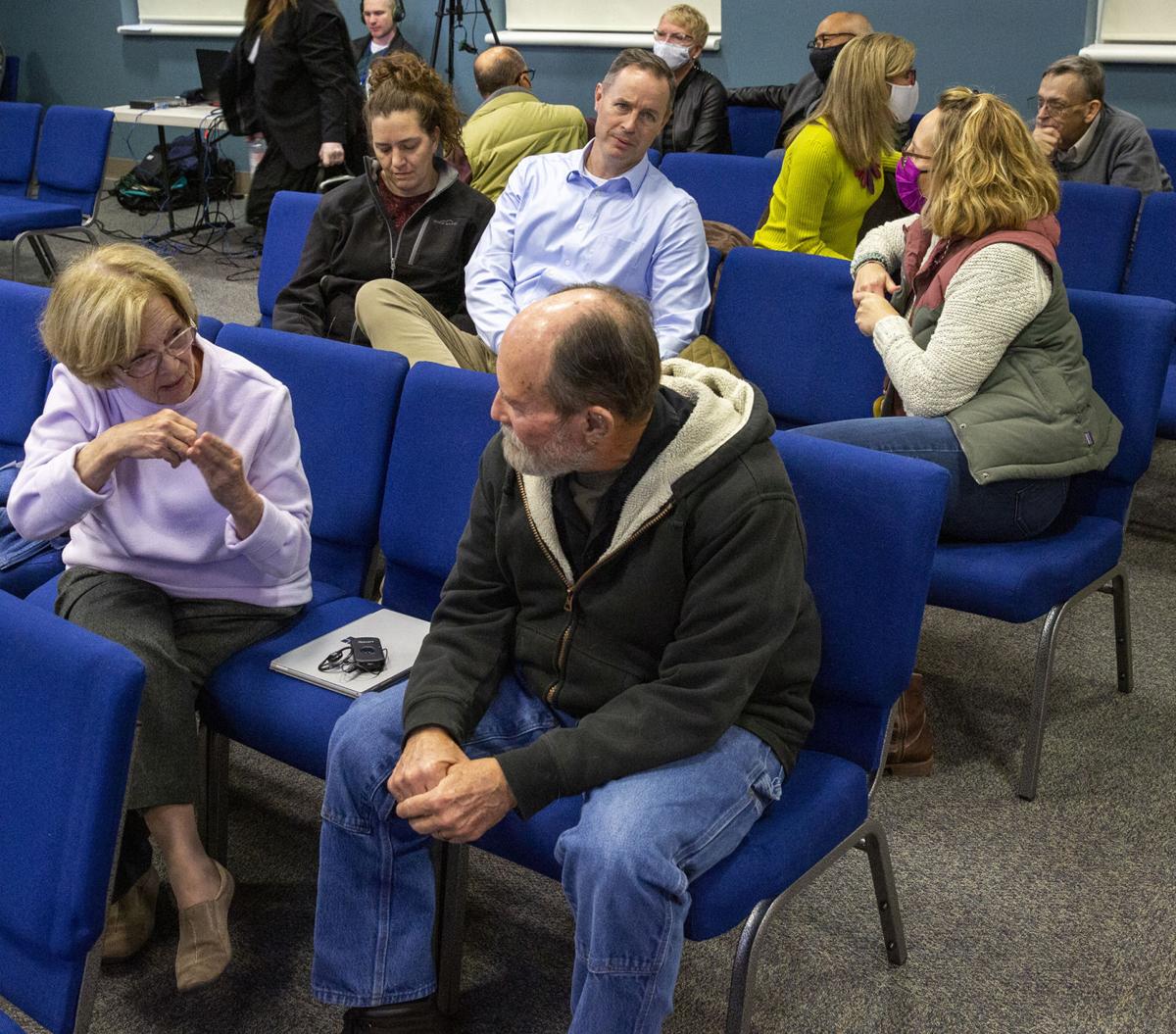 On a 3–2 vote, the King George County Board of Supervisors voted this week to move a monument that honors Confederate soldiers off the courthouse lawn.

The action was applauded by members and friends of the King George chapter of the NAACP who’d been asking the county to move the obelisk from public property for more than 18 months. On Tuesday, Robert Ashton, NAACP vice president, asked the supervisors once more to “stop the politics and do the right thing by moving the monument to a cemetery where it belongs.”

“The Confederacy was a racial institution,” Ashton said, “therefore any statue or monument honoring the Confederacy endorses racism.”

David Jones, who is white, was the first to publicly bring the issue before the board in July 2020, and on Tuesday, he again called the monument the “Confederate traitors’ memorial.” His great-great-grandfather was among those who fought for the Confederacy, and while Jones said he respects his ancestor, he would never support his decision to take up arms to keep Black people enslaved. He noted the dozens of times the preservation of slavery was cited in secessions documents for Southern states, including Virginia.

Other King George residents, such as Steve Davis, were opposed to removing objects they deemed historical.

“It saddens me to see the history of this country erased,” Davis said, adding that modern-day residents won’t be able to teach about injustices to the African-American community if all traces of its existence are gone. “How can we find our way in the future if we don’t know where we’ve come from?”

Opinions from members of the Board of Supervisors reflected the divisive nature of the matter that’s been debated in communities across the nation. The issue was brought to the forefront in May 2020, after a white Minneapolis police officer arrested—and killed—George Floyd, a Black man.

While Confederate monuments in other cities, including in Virginia, were defaced and torn down, King George residents never asked for the monument to be destroyed, only moved to a private cemetery, where those who wished to visit it could do so.

As supervisors explained their positions Tuesday, it became clear that Chairwoman Annie Cupka represented the tie-breaking vote among her colleagues.

Supervisors Richard Granger and Jeff Stonehill favored moving the monument to Historyland Memorial Park, a cemetery off U.S. 301. A contractor submitted a bid for $38,000 to relocate the single obelisk to the cemetery, where owner David Storke said the county could have space free of charge.

Supervisor Cathy Binder is active with the King George Historical Society, whose leaders wanted the monument to stay in place, and she said on Tuesday that she preferred letting the voters decide. She supported a referendum, particularly because the public hearing on the monument was held during Thanksgiving week and not well-attended. About 20 people were in the audience.

Supervisor Jeff Bueche preferred moving not only the Confederate memorial, but other monuments at the county courthouse—a World War I monument and gun from the Navy base at Dahlgren—to a place together in a memorial park. If all the monuments weren’t moved in an orderly fashion, he said he opposed moving the Confederate monument.

Cupka acknowledged the argument raised by some residents, that when the new courthouse opens in 2023, farther down State Route 3, the Confederate monument no longer will be on the courthouse lawn. But unless King George disposes of the property—which probably won’t happen because of a need for office space—the land will remain in county hands, she said.

“If that type of object,” she said, referring to the Confederate memorial, is on “the front lawn of where we do business … to me, it is not a good look. It does not say we are open for business with everybody in our community.”

Cupka also said she didn’t want any defendants or victims to feel like they weren’t getting fair treatment by judges or juries who didn’t look like them “because of what’s out front on the lawn.”

Earlier in the evening, King George resident Collin Blake, who has four ancestors named on the monument, said he didn’t want it “taken down because a minority of people in this county, by numbers, are trying to get it moved.”

“I don’t want to see a handful of people that are over represented in our politics today, a very vocal minority, stopping a very silent majority,” Blake said.

Cupka checked the 2020 Census figures and noted that 22 percent of King George residents identified themselves as “not white.”

“I am not willing to overlook 22 percent of our citizens for the other 78 percent,” she said. “To me, if one of us, any one of us, is diminished, all of us are diminished and we should want so much more than that for our community.”

While the supervisors voted to move the monument from public property, they did not award the relocation contract or specify where the memorial is going. Part of a new law adopted by the Virginia General Assembly last year states that if a governing body votes to remove or relocate a memorial, it first has to offer the monument to a museum, historical society, government or military battlefield for 30 days.

After that, the Board of Supervisors has the sole authority in determining the final outcome.

As Bueche noted, King George may be facing a budget shortfall because its new cigarette tax is not bringing in as much revenue as expected. The difference between what the county budgeted and may actually receive might be more than half a million dollars, Bueche said. If that’s the case, he said the county would have to carefully consider all expenses, including the $38,000 to move the Confederate memorial.

What do we know about the Omicron variant?

WHO designates new COVID strain Omicron as ‘variant of concern’

WHO designates new COVID strain Omicron as ‘variant of concern’

King George County Board of Supervisors voted 3-2 to remove a Confederate memorial from the courthouse lawn.

About 20 people attended the TRISTAN LOREI / THE FREE LANCE–STAR King George Board of Supervisors’ public hearing Tuesday on moving the Confederate memorial off county property.

Supervisor Annie Cupka holds up a finger to Supervisor Cathy Binder as the two express different viewpoints about moving a Confederate memorial from the county courthouse lawn.

Robert Ashton, the vice president of the King George chapter of the NAACP, asks the supervisors to move the monument.