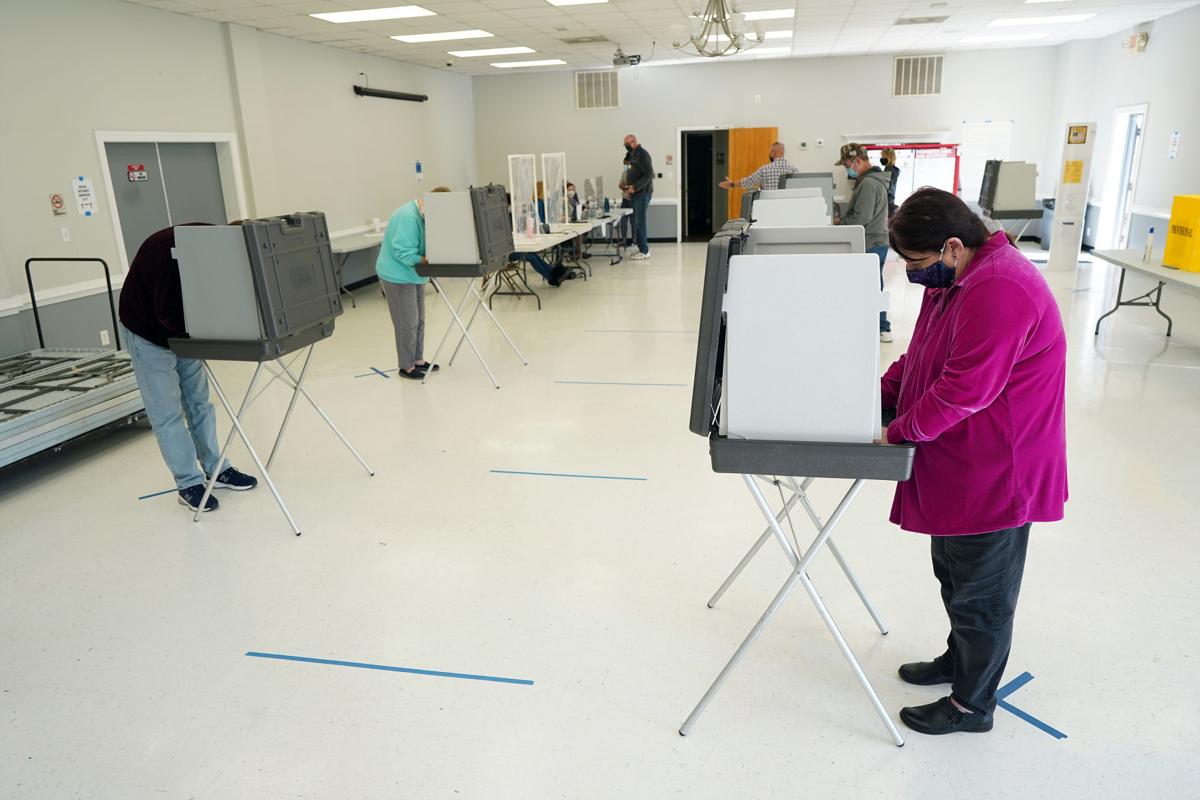 Voters cast their ballots at the White Oak Fire Department in Stafford, Va. on Nov. 3, 2020. 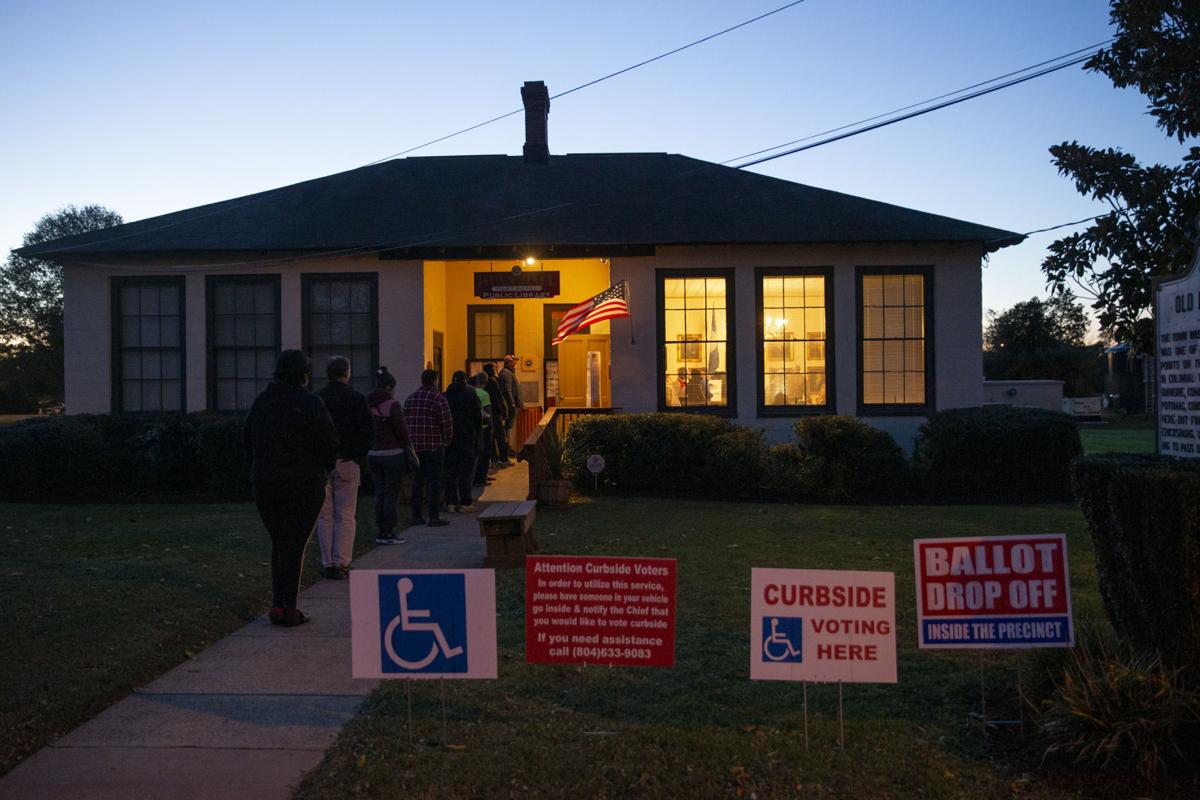 Voters wait to cast their ballots on Election Day at the town hall in Port Royal, Va. on Tuesday, Nov. 3, 2020. 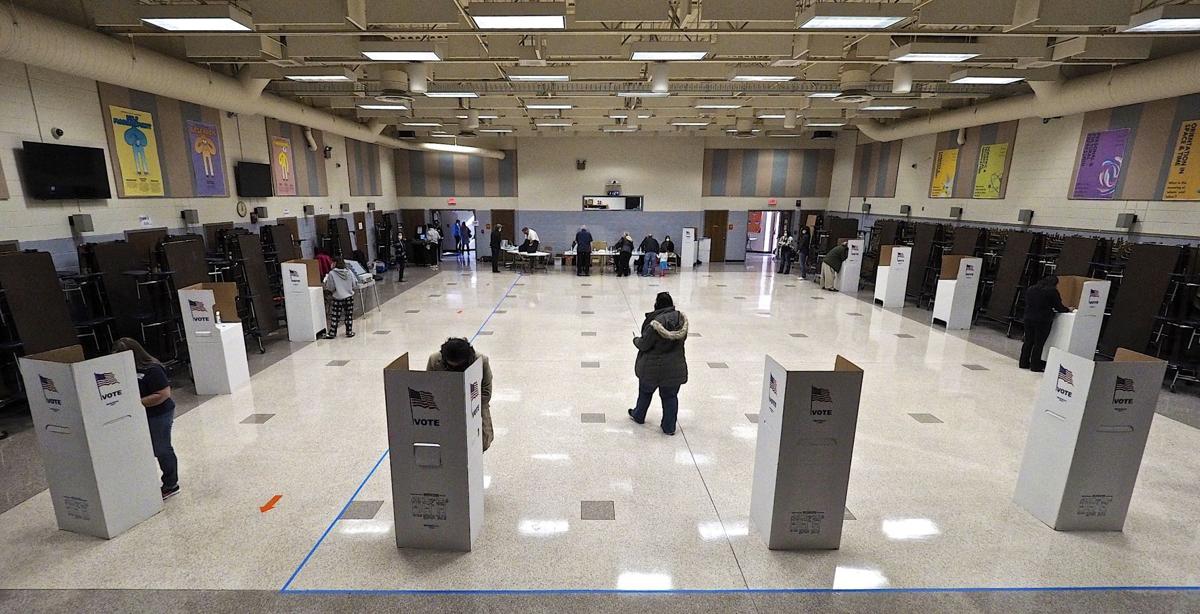 Voters cast their ballots at Walker–Grant Middle School in Fredericksburg on Election Day. 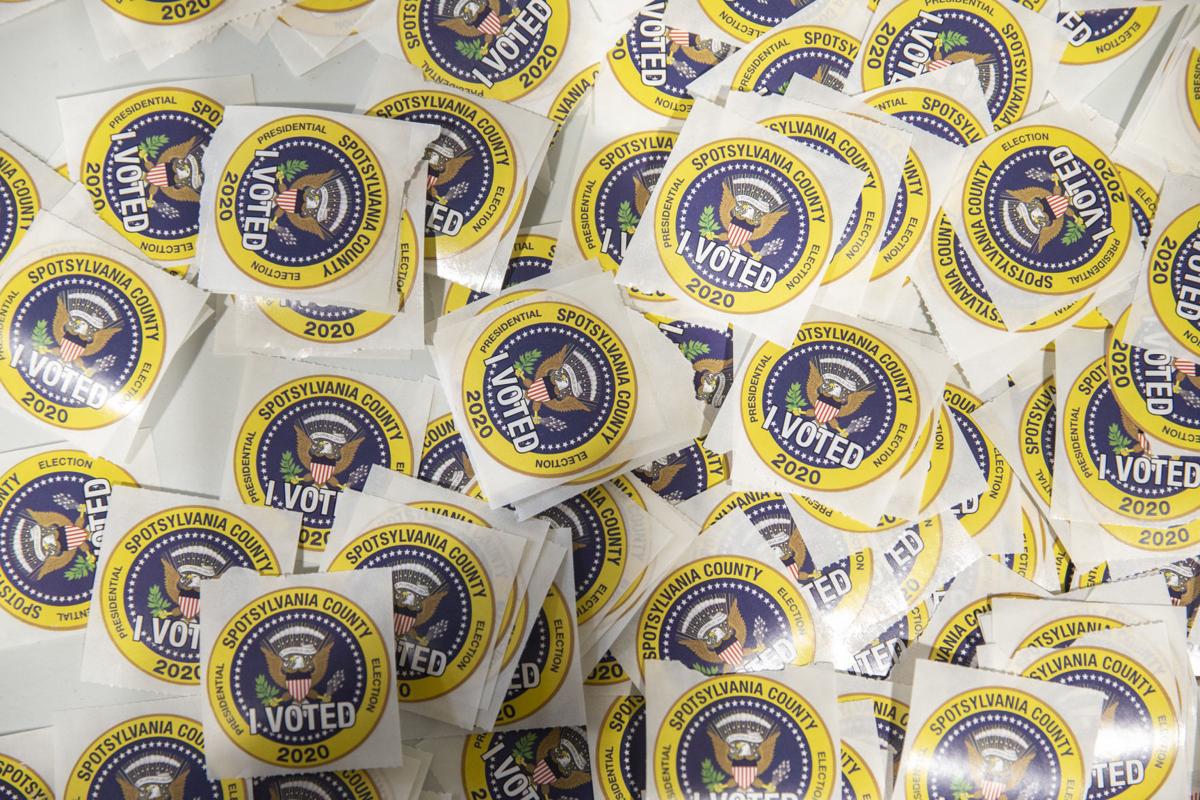 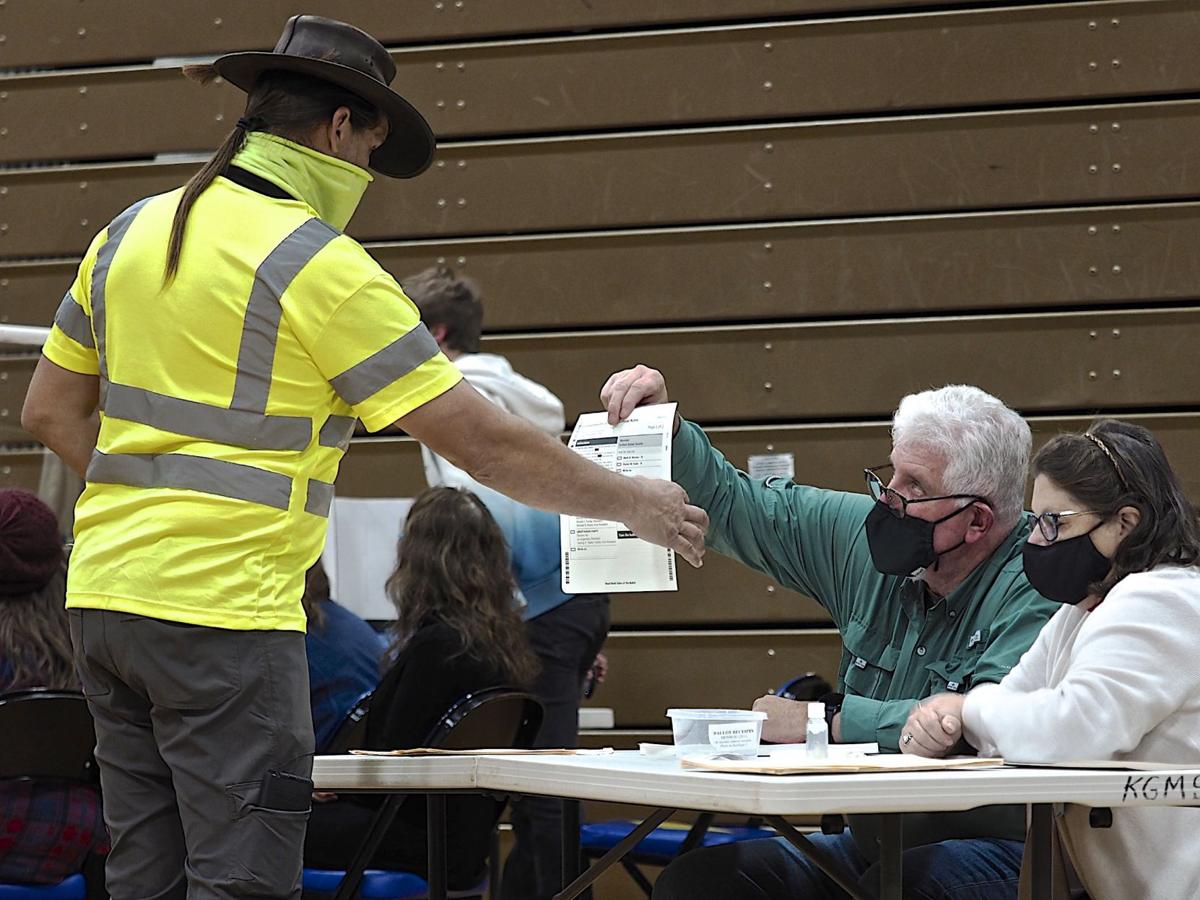 Ken and Lora Pierson assist a voter at the polls at King George Middle School on Election Day. 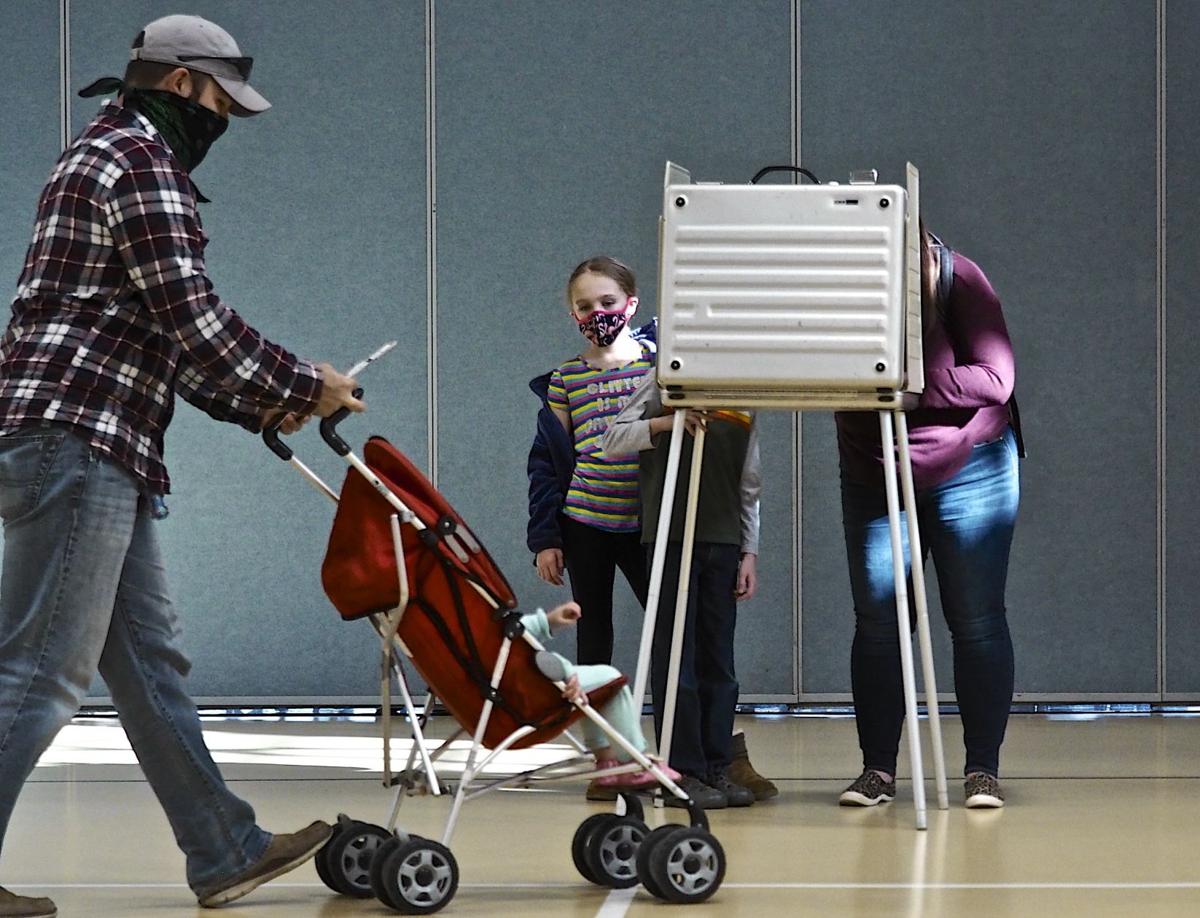 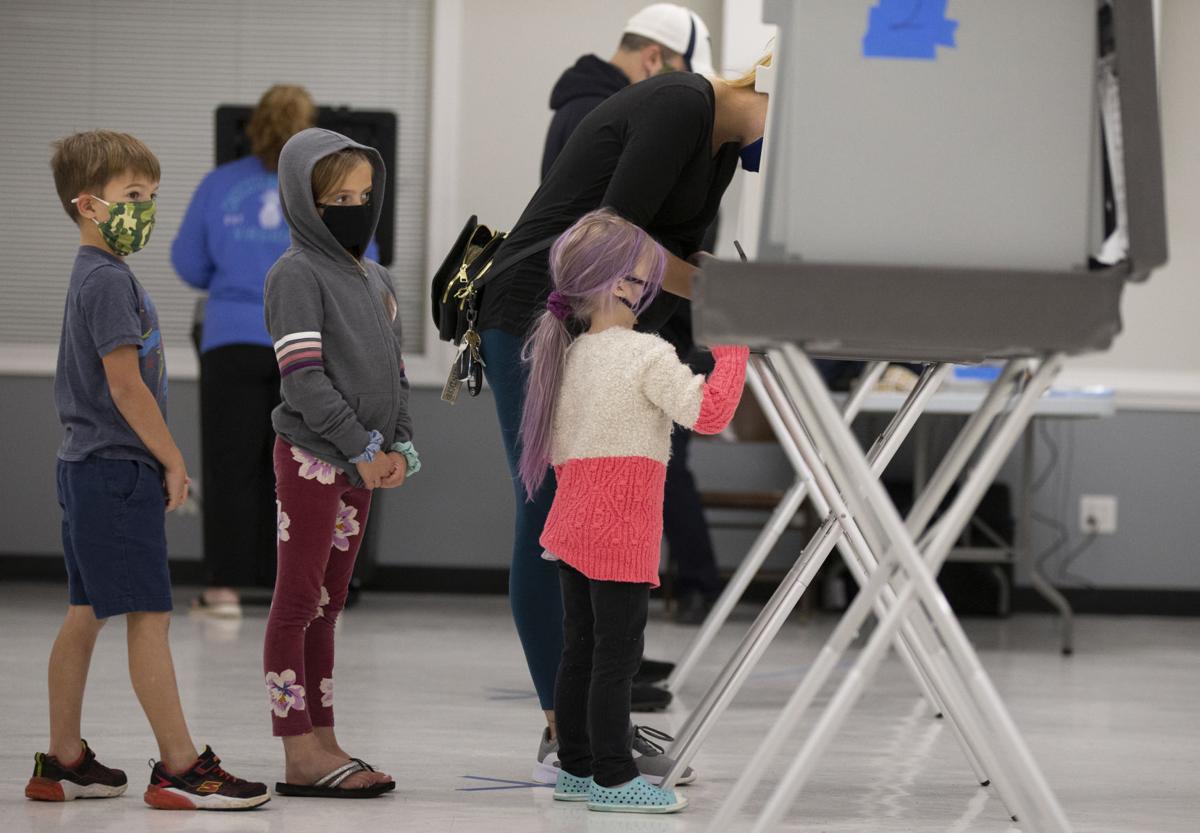 Donna Stivers fills out her ballot while her children (from left) Michael, Aubrey and Alayna wait at the White Oak FIre Station on Election Day in Stafford, Va. on Tuesday, Nov. 3, 2020. 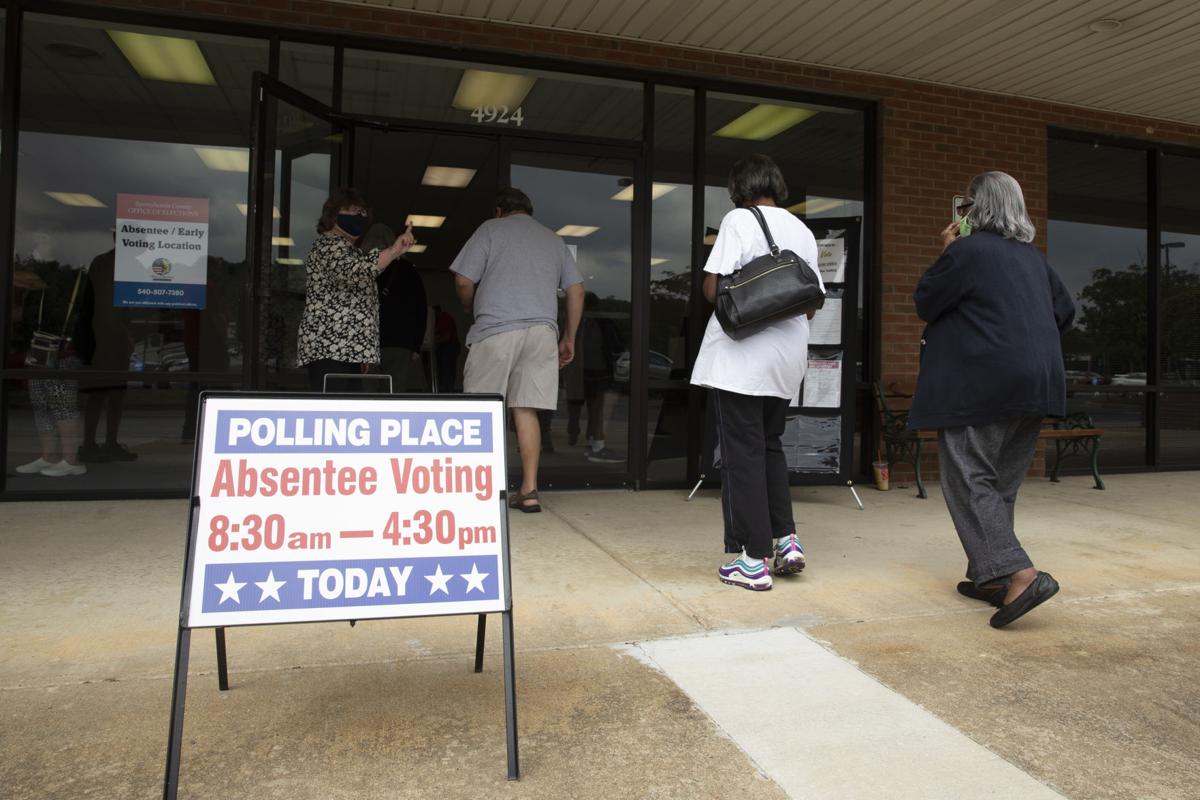 Voters arrive on the first day of early voting at the Office of Elections satellite location in Southpoint in Spotsylvania, Va. on Friday, Sept. 18, 2020.

In a year when everything else has been turned on its ear, it’s only fitting that the 2020 presidential election would be like none other.

Results in the Fredericksburg region mirrored what’s happened in the rest of the state and nation: There essentially were two distinct elections for president.

“One took place on Election Day and involved people who overwhelmingly favored President [Donald] Trump,” states the Virginia Public Access Project website. “The other involved those who voted early and were equally emphatic about Joe Biden.”

Locally, more people cast ballots for the two major parties before Nov. 3 than on Election Day.

In Fredericksburg and the counties of Caroline, Culpeper, Fauquier, King George, Orange, Spotsylvania, Stafford and Westmoreland, six of every 10 voters opted for absentee ballots, which were mailed in or dropped off, or they voted early at designated voting stations. All told, almost 60 percent of early voters favored Biden while 70 percent of Election Day voters preferred Trump.

The number of people voting before Election Day might have been even higher “if both parties had encouraged early voting,” said Stephen Farnsworth, a political science professor at the University of Mary Washington. “I think that President Trump made a mistake in discouraging his supporters from voting early.”

Joseph Hastings acknowledged some of those issues after he voted Tuesday at King George High School.

“I’m not particularly concerned about same-day versus early voting,” he said. “I know some people think the whole early voting is filled with fraud. I understand that, but don’t think that’s really a problem.”

Farnsworth called voters the real winners this year, as record numbers of Virginians—and Americans—made their choices. Statewide turnout was about 73 percent, just under what VPAP describes as the “high water mark” for voter participation in Virginia—the 2008 election of President Barrack Obama, when voter turnout reached 74 percent.

Turnout for the region averaged 76 percent and ranged from a low of 69 percent in Fredericksburg to a high of 80 percent in Fauquier County.

“It’s become easier than ever to vote in Virginia, and the turnout numbers speak to intense voter enthusiasm about the election, as well as the increased ease of casting a ballot,” Farnsworth said. “There’s no doubt about it, if you make the process of voting easier, more people will participate.”

As in past presidential elections, the majority of the region voted Republican. The president did best in the rural areas of Culpeper, Orange and King George, where he claimed about 60 percent of the vote. In the Woodford precinct of Caroline County, almost three of every four people who voted on Election Day picked Trump.

Fredericksburg and Stafford County were the only two localities won by Biden, who got 66 percent of the city vote and 50.5 percent of Stafford’s tally. The margin was a slim one—only 2,625 votes separated Biden and Trump in Stafford, which has 105,711 registered voters.

While concerns about COVID-19 may have been the reason more people chose to vote early rather than on Election Day, future voters will have the same early options, pandemic or no pandemic.

“Early voting is here to stay,” said Lorrie Gump, voter registrar in King George, where more than half of the county’s registered voters made their decisions ahead of Election Day.

In April, Virginia Gov. Ralph Northam signed legislation allowing state voters to cast their ballots up to 45 days before an election, without having to give a reason for why they can’t get to the polls.

As a result of the measure, voter registrar offices throughout the region were busy well before the candidates made their final campaign pushes. In King George, Gump said her office dealt with its longest lines on Oct. 31, the last day of early voting, when 586 people voted.

As a result of all the early balloting, those who went to the polls on Election Day got through them at record speed.

“It’s been the quickest day of voting I’ve ever had,” said Andrew Burge after he cast his ballot at Sealston Elementary School in King George.

Like others across the country, Burge called the 2020 presidential race “one of the largest elections of our time,” saying it’s “important whatever side you stand on that you come out and vote, every year.”

Stafford County voter Carl Zoolkoski was so moved by the weight of this year’s election that he got emotional after he voted at White Oak Fire Department in Stafford County. He apologized for his tears, but said it was such an important day, and he hoped good would prevail.

“I really believe we need it,” he said.

Source: Virginia State Board of Elections, based on votes in 2020 presidential election.

As case numbers rise, so do the number of people hospitalized for virus symptoms. Rates are higher than they've been since the pandemic began.

New COVID-19 cases are being reported in record numbers across the area and state.

A local man was killed Friday night in a single-vehicle crash in Caroline County, police said.

Every person in the path of Billy Demarest did what was needed to save his life after he suffered a massive heart attack and sudden cardiac arrest.

A pair of Fredericksburg-area house cleaners have been charged in the theft of wedding rings, according to the Stafford County Sheriff’s Office.

Voters cast their ballots at the White Oak Fire Department in Stafford, Va. on Nov. 3, 2020.

Voters wait to cast their ballots on Election Day at the town hall in Port Royal, Va. on Tuesday, Nov. 3, 2020.

Voters cast their ballots at Walker–Grant Middle School in Fredericksburg on Election Day.

Ken and Lora Pierson assist a voter at the polls at King George Middle School on Election Day.

Donna Stivers fills out her ballot while her children (from left) Michael, Aubrey and Alayna wait at the White Oak FIre Station on Election Day in Stafford, Va. on Tuesday, Nov. 3, 2020.

Voters arrive on the first day of early voting at the Office of Elections satellite location in Southpoint in Spotsylvania, Va. on Friday, Sept. 18, 2020.