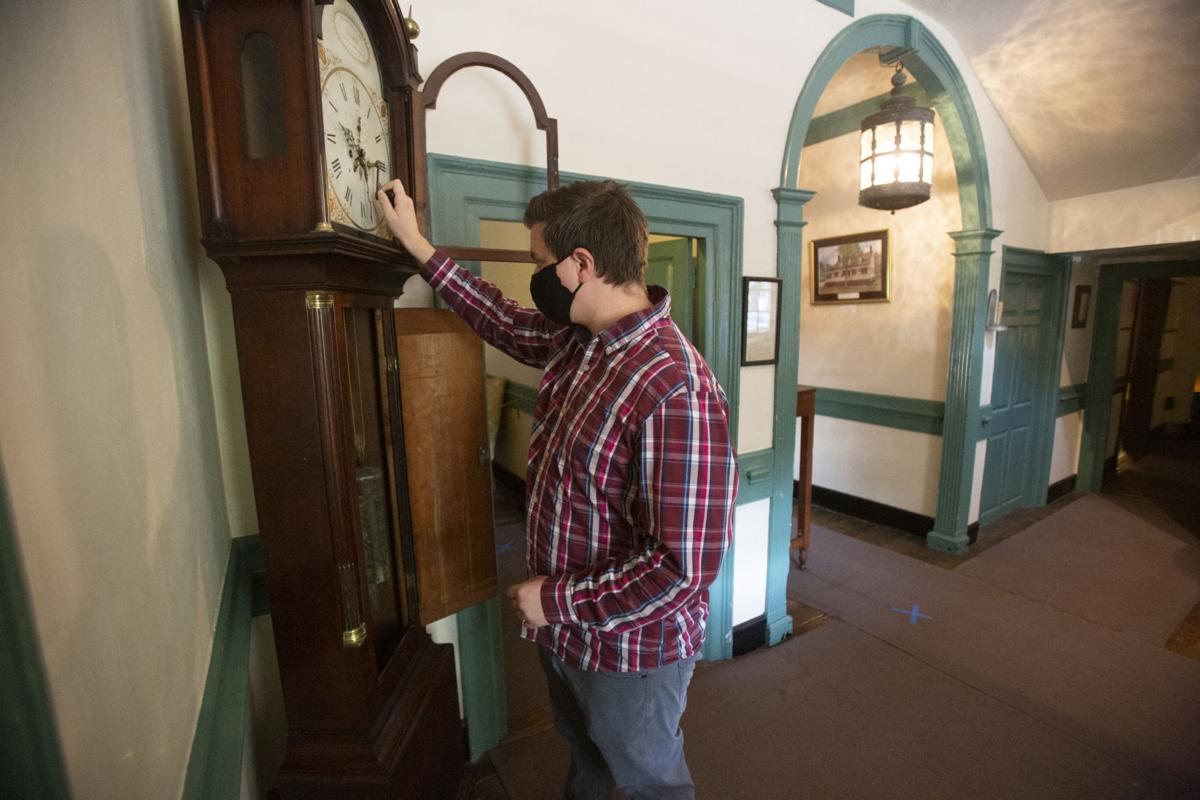 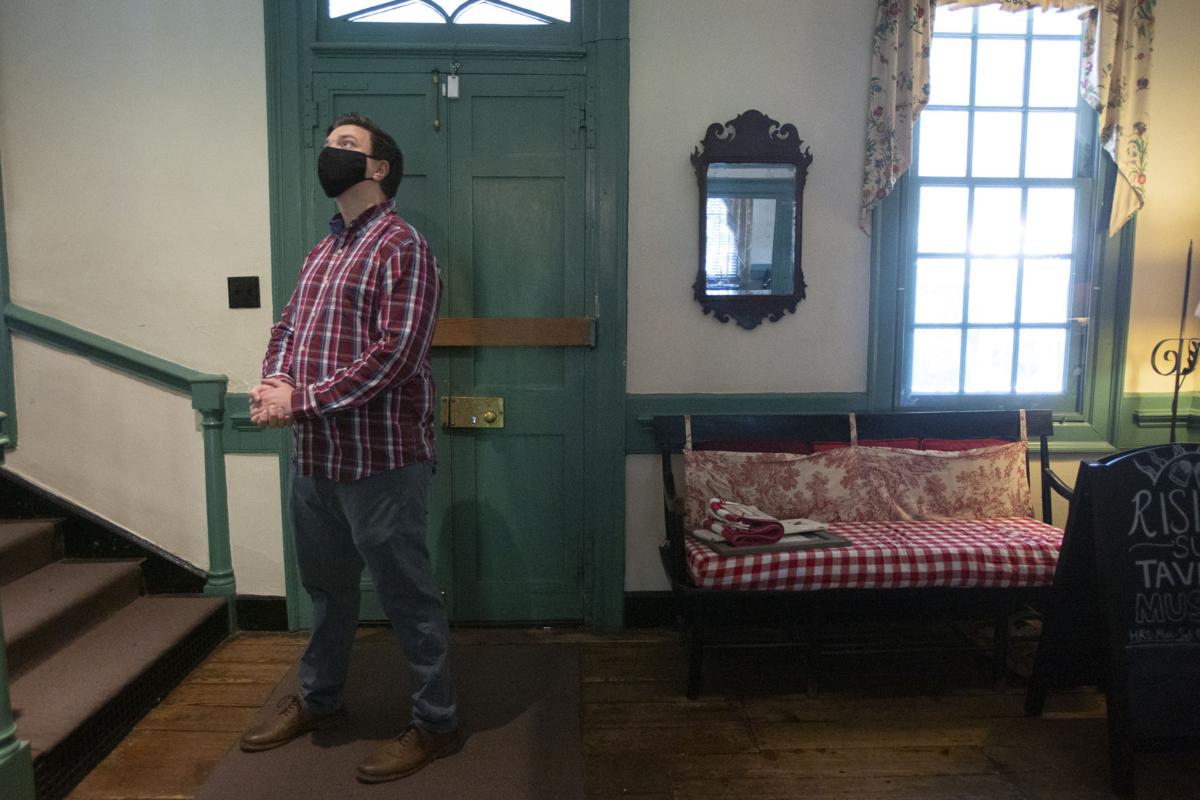 Daniel Hawkins, manager of the Rising Sun Tavern, inspects the property in Fredericksburg. 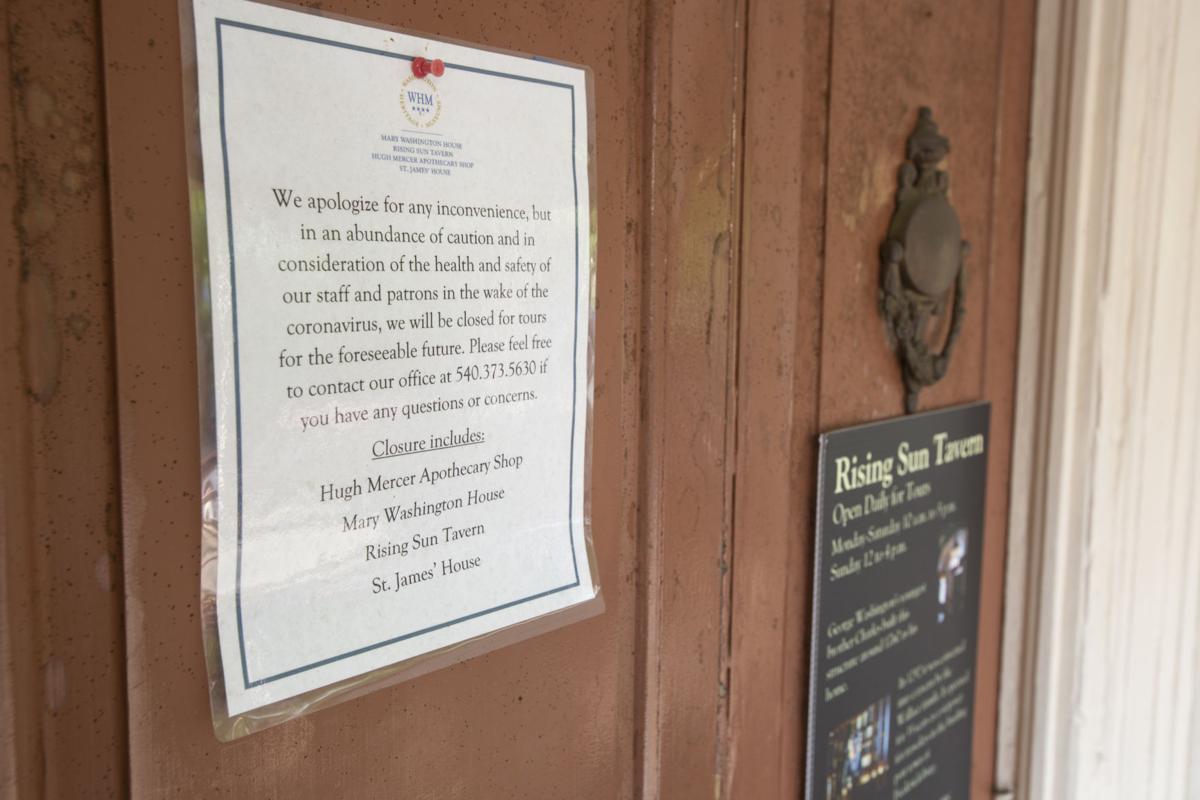 A sign is posted on the front door of the Rising Sun Tavern. 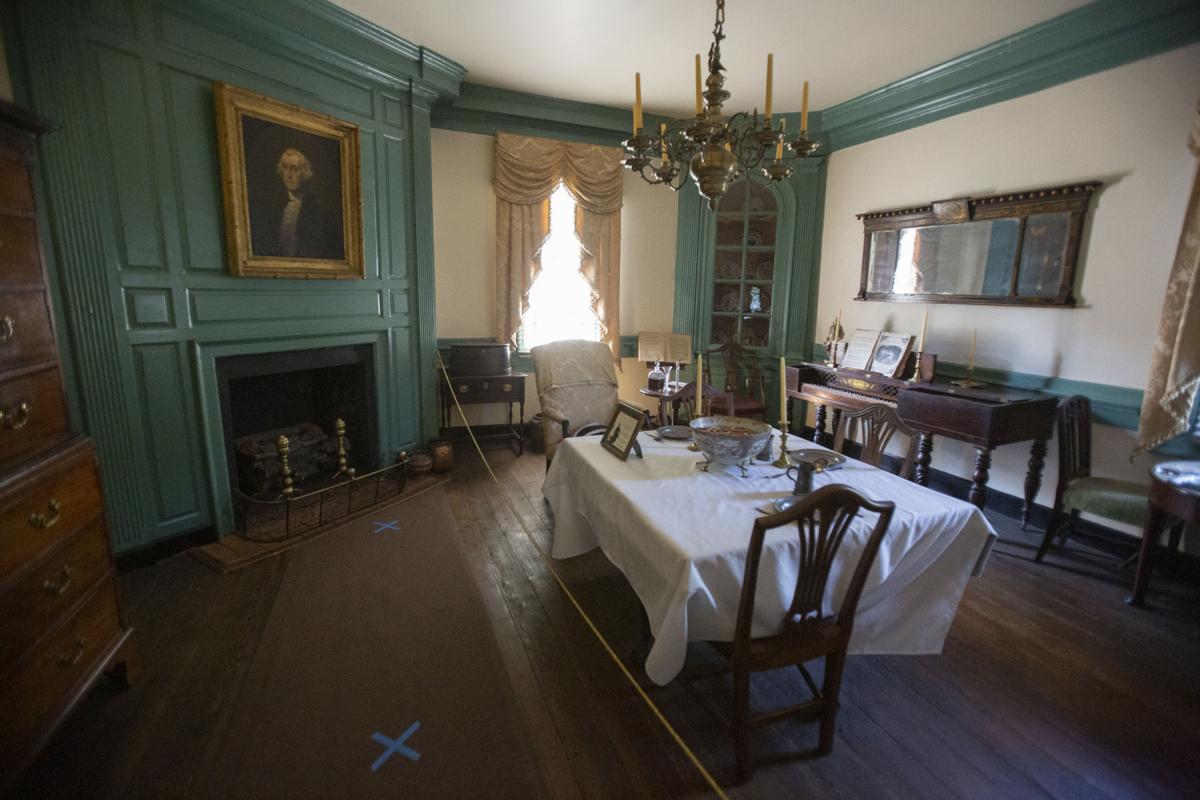 Blue tape denotes proper spacing for social distancing on the floor of the Rising Sun Tavern on Caroline Street. 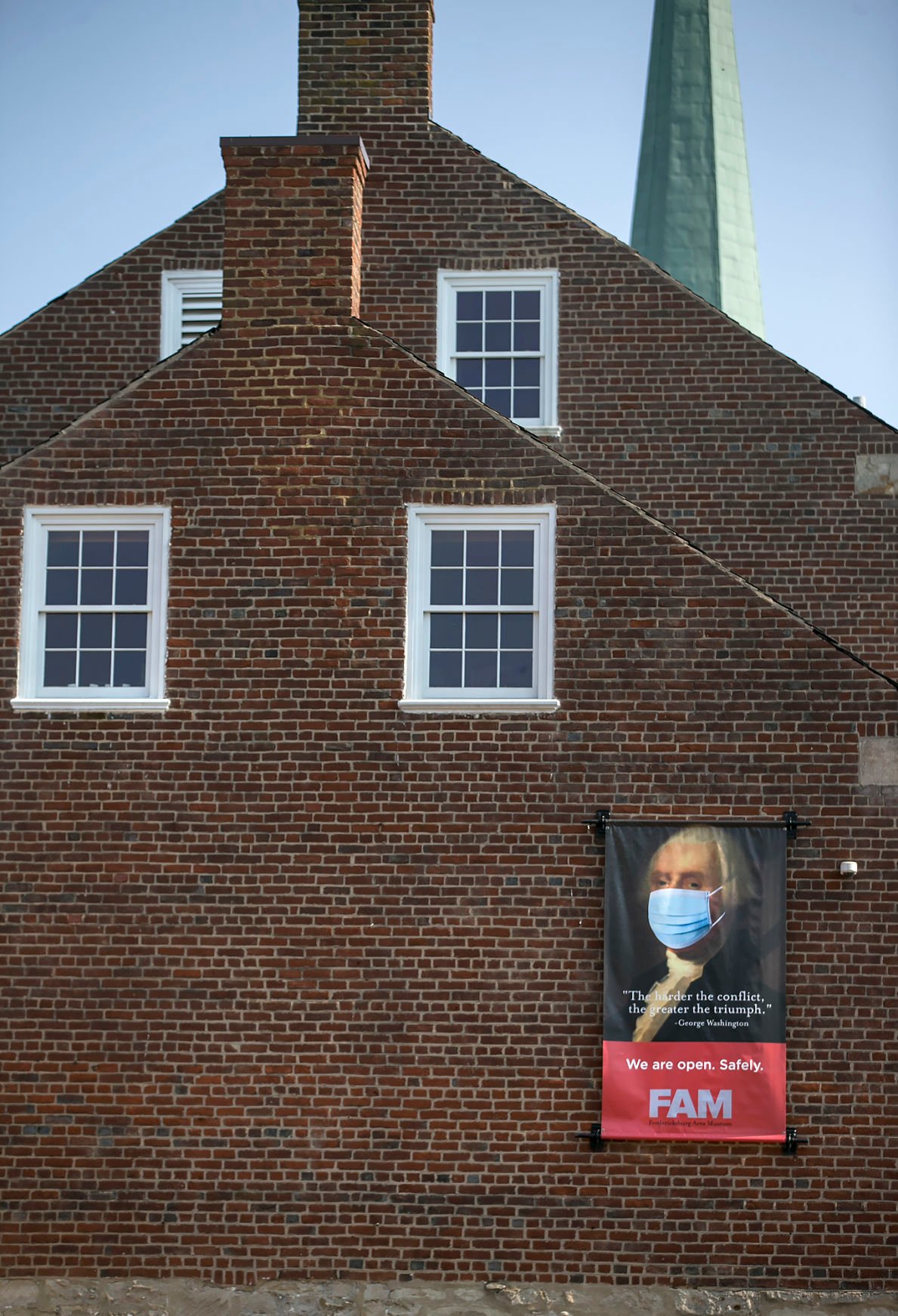 George Washington wears a face mask on the side of the Fredericksburg Area Museum, at William and Princess Anne streets.

In a normal year, the Fredericksburg Area Museum uses funds raised during its summer programming—such as the Sounds of Summer outdoor concert series—to pay staff salaries for the months of October, November and December.

This year, because of COVID-19, there was no summer programming.

“Programming is a very big chunk and that’s gone,” said Sara Poore, president and CEO of the museum. “We are scheduling fall programming as we can, based on the state guidelines.

“It is very, very tricky. The programming we can do will by no means cover our costs, but rather hopefully just cover our general operating bills such as utilities.”

The museum reopened Aug. 1 after being closed since mid-March. Visitors purchase timed tickets—preferably in advance of arriving at the building—and can enter in 15-minute intervals. Only one floor of the museum is open and masks are required for entry.

During the four-month closure, the museum stepped up its virtual presence, with daily Facebook posts and some virtual programming. It also held “Camp in a Bag”—a week’s worth of summer camp activities that families could pick up and complete at home—as well as a four-session outdoor archaeology camp with limited space to preserve social distancing.

Poore said the museum received a payroll protection loan to cover staff salaries for April, May and June. Though none of the “small and mighty” staff have had to be let go, Poore said the way forward for the area museum—and all museums—is murky.

“We have taken a severe financial hit because we were not able to be open,” she said. “That’s four months’ worth of community outreach that we’ve lost. Our membership is down, our revenues are down. The local museums really need support.”

According to the results of a July survey conducted by the American Alliance of Museums, one-third of museums are in danger of closing permanently due to coronavirus-related closures and financial disruptions. More than half of museum directors surveyed said their endowments or other financial reserves would not last more than six months and 87 percent said their reserves would hold out for a year, but not longer.

“It’s mind-boggling,” American Alliance of Museums President Laura Lott told the Los Angeles Times in July. “For hundreds of years, museums have been there to collect, preserve, interpret and share what our culture determines is important for future generations to be able to experience and be inspired by and learn from. And the prospect of [so much] of that going away is really devastating to a culture.”

None of the local museum officials The Free Lance–Star spoke to said their venues are in immediate danger of closing, but all said they are working hard to figure out how to reopen or stay open safely and stay financially viable.

“Every museum is sort of on the cusp anyway,” said Meghan Budinger, curator at the George Washington Foundation, which oversees Historic Kenmore and George Washington’s Ferry Farm. “Even a good year for a museum is not really what most businesses would call financially stable.”

The foundation’s sites reopened July 1 after being closed since March 13. Visitors are encouraged to buy tickets for tours online in advance.

Tour groups are limited to seven people at Kemore and nine people at Ferry Farm, and the amount of time tour groups spend inside buildings has been shortened.

“It was rough,” Budinger said. “We definitely took a hit. Our development office especially took a huge dive into grant applications and did a lot of increased work trying to keep in touch with our donors.”

Anne Darron, executive director of the Washington Heritage Museums—which oversees the Mary Washington House, the Rising Sun Tavern, the Hugh Mercer Apothecary Shop and the St. James House—said admission proceeds make up a little less than a quarter of the organization’s annual budget.

The sites are still closed and have been closed since March. In addition, the organization’s largest fundraiser, the Bourbon and Boxwood gala usually held in September, has also been cancelled this year because of COVID-19.

Though members are continuing to renew, the loss of revenue has “obviously been detrimental,” Darron said.

“It has caused us to reevaluate our budget and make cuts where necessary, and delay some other things we had hoped to take on this year,” she said.

Darron said she hopes the downtown properties can reopen on Sept. 11, though she stressed that this is only a hope.

“The rooms in our properties are very small,” Darron said. “The largest of our rooms can accommodate only six people that aren’t related to each other. So given state guidelines, we’ve been having to work hard to figure out exactly how to do all this. It’s not an easy process.”

Docents at the three sites have not worked since mid-March. The managers of each historic site are still employed, checking on the collections and planning for reopening, Darron said.

Washington Heritage Museums, like the Fredericksburg Area Museum, has relied heavily on volunteers in the past to assist at the front desk, help maintain the garden at the Mary Washington House, set up before events and clean up afterwards and assist with programming.

Social distancing requirements and virus fears will limit the number of volunteers available to help with those activities, Poore said.

“Volunteers make up a very large percentage of our workforce,” Poore said. “Although several volunteers are returning, the impact this loss will also greatly impact what we can do.”

Scott Harris, director of the University of Mary Washington Museums—which oversees the James Monroe Museum and the Gari Melchers Home and Studio at Belmont, as well as the Papers of James Monroe—said the loss of admissions and event revenue since March has been “a very large financial hit” for the two museum sites.

“[The financial loss] is only partially offset by savings from not paying hourly wage employees, such as front desk and interpretive staff, and some other savings of on-site costs, such as catering at events, regular trash service, etc ... ,” Harris said.

He said membership renewals at both the James Monroe Museum and the Gari Melchers Home and Studio have been “fairly steady” and some members have increased their giving levels.

“It remains to be seen what General Assembly actions will do to our state appropriations,” Harris said. Both UMW museums belong to the state of Virginia and receive funding from the assembly.

Both sites have a “benchmark” reopening date of Sept. 14, when UMW students begin their fall semester, he said.

Local National Park sites have had a slightly different experience as a result of the coronavirus pandemic.

Buildings and visitor centers were closed, but trails and landscapes were open and were heavily used in April, May and June, Hennessy said.

“Many local people discovered the park as a place of quiet, a place they could just get away to—out of their house, without having to worry about crowds,”Hennessy said. “It was a time that revealed to many people that these places—yes, they’re historic, they’re important, but they’re also quiet places of refuge from the world around us. And the world around us has been more tumultuous than we’ve ever known.”

Park staff returned to work in June and with fewer out-of-state visitors travelling to the sites than in previous years, rangers have had more time to engage people, he said.

“So it’s been a different summer, but I think lots of the folks who have worked on the landscape interacting with people have said they’ve had a great many meaningful conversations with people because it hasn’t been as busy,” Hennessy said. “So that’s been a boon.”

COVID-19 has forced all museums and cultural organizations to expand and diversify their online content in order to continue engaging with visitors while physical sites have been closed.

“It has definitely made us think about taking our message out rather than waiting for people to come to us,” Budinger said. “I think maybe we have reached a lot more people than we used to. I guess that’s the bright side.”

For local museums, this engagement has meant live Facebook events, such as curator chats; virtual programs such as upcoming joint event between the James Monroe Museum and the Washington Heritage Museums titled “Fabrics of History;” and daily Facebook posts.

“It’s been very interesting because when you don’t have visitors in, you notice things in your collection or in your buildings—small details, say, on a chair or a chest—that you didn’t particularly notice before,” Darron said. “So we’ve been sharing that on our Facebook page.”

The UMW museums compiled printable activities, links to videos and other educational resources on their websites and Harris said the response to these has been “very positive.”

Both sites also received grants from the Community Foundation for the Rappahanaock Region to create 3D tours.

Kenmore and Ferry Farm did daily social media posts sharing archival images of the sites from the 1920s through World War II, as well as peeks into the collection.

They also asked their social media following to take Flat George Washington and his sister, Flat Betty Lewis, around town and share pictures of them.

“We got lots of pictures of George and Betty all over town, doing different things,” Budinger said. “Our views and interactions and managements on social media really skyrocketed during the closure.”

Darron said the push to find new ways to engage with visitors has been “a silver lining” to the COVID-19 crisis, as it may help museums figure out how stay relevant to new audiences.

This work is crucial to museums’ ability to survive, Poore said.

“The future of museums is on shaky ground all across the country,” she said. “This has really made us think about our future and how to keep ourselves relevant. How do we come outside of our four walls?”

Daniel Hawkins, manager of the Rising Sun Tavern, inspects the property in Fredericksburg.

A sign is posted on the front door of the Rising Sun Tavern.

Blue tape denotes proper spacing for social distancing on the floor of the Rising Sun Tavern on Caroline Street.

George Washington wears a face mask on the side of the Fredericksburg Area Museum, at William and Princess Anne streets.