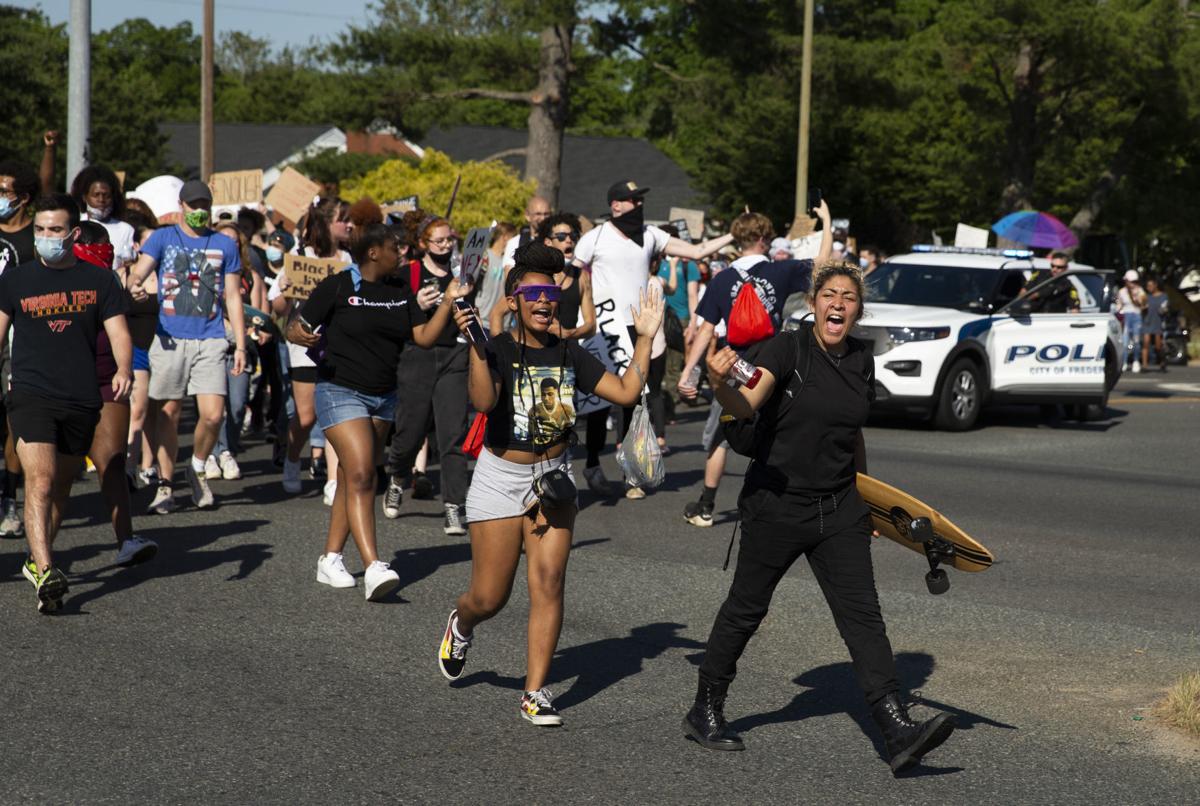 Eddie Banks leads a group of protesters on U.S. 1 as they march from City Hall to the police station in Fredericksburg. 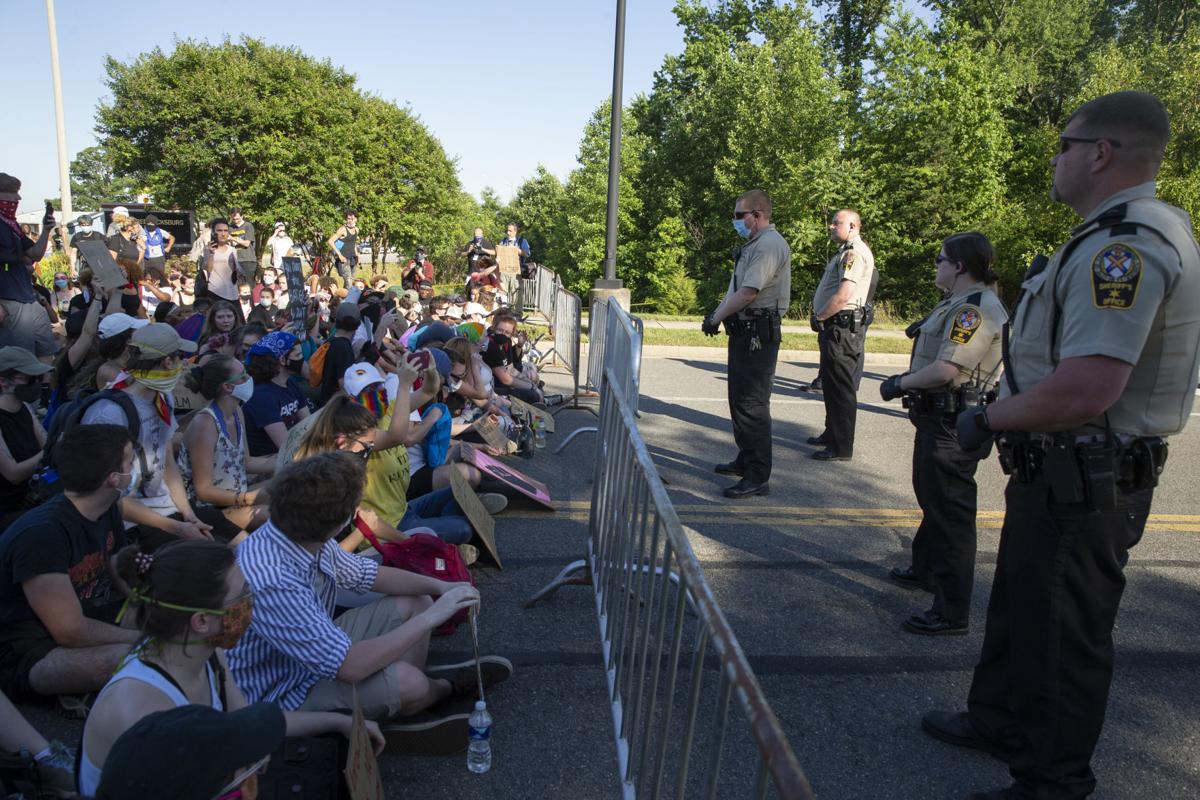 Demonstrators sit in front of the Cowan Boulevard entrance to the police station in Fredericksburg, 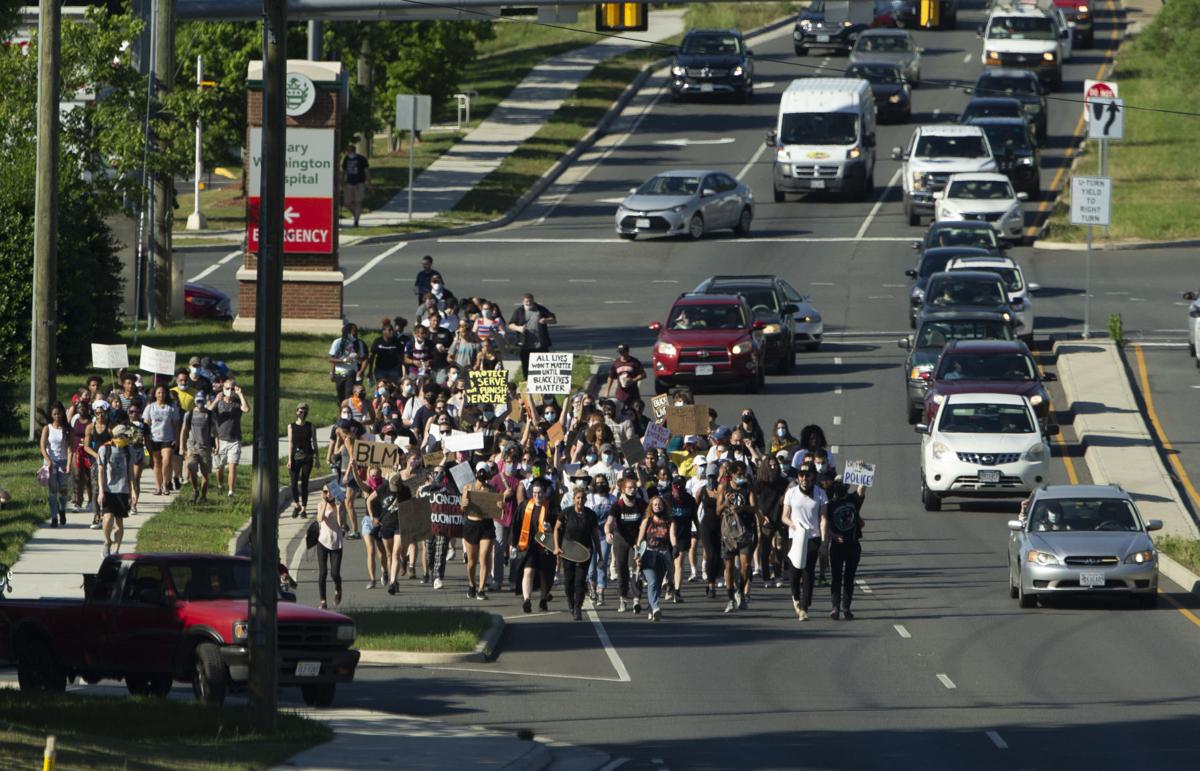 Black Lives Matter demonstrators march toward the police station on Cowan Boulevard in Fredericksburg, where they found metal barricades. 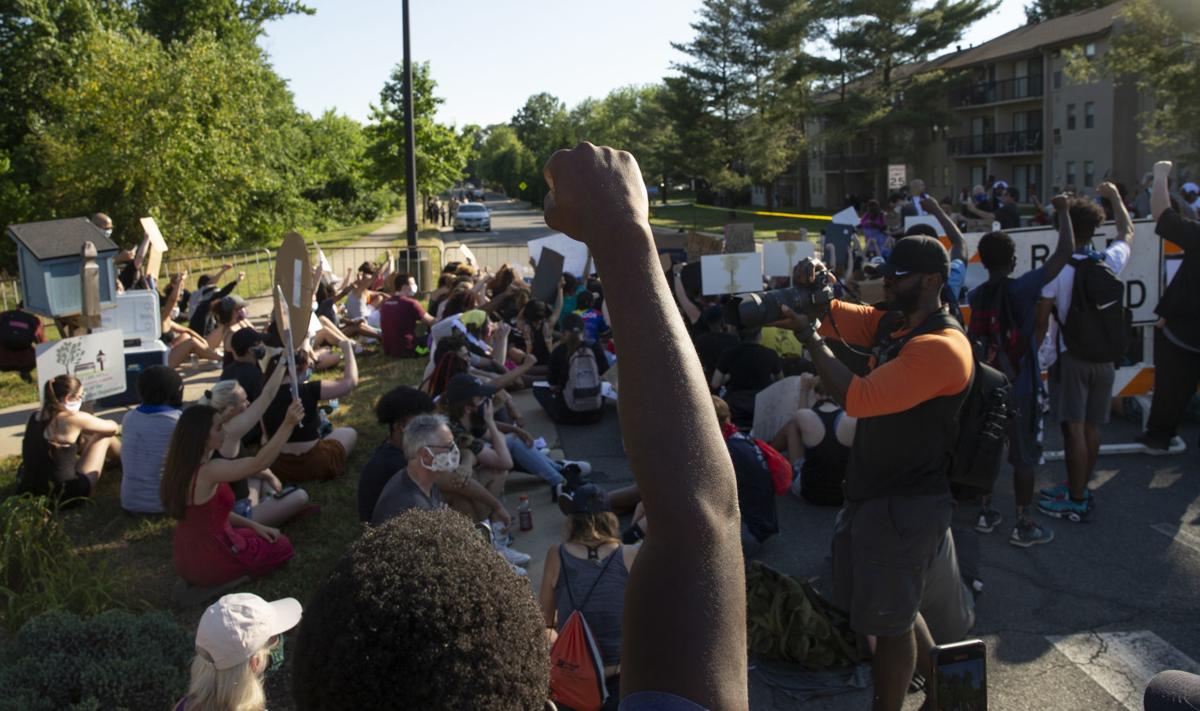 A group of Black Lives Matter protesters had a lot to say Monday as they again marched through Fredericksburg, and none of it was favorable to police.

The group marched from the downtown area to the police station on Cowan Boulevard, carrying signs advocating the defunding of police and shouting such things as “no justice, no peace … [expletive] those racist-assed police.”

Police officers followed the group through downtown and south along U.S. 1 until the marchers reached the area of the police station on Cowan Boulevard. Police at one point ordered the protesters to get off the roadway and onto the sidewalk along Caroline Street, but the group ignored the directive and kept chanting.

After the march reached Cowan Boulevard, an officer warned members of the group they were risking arrest by continuing to march in the street. The group responded with what protesters called the “white wall,” which meant placing the white protesters between the police and the protesters of color.

After arriving at the police station, the group staged a lengthy silent protest in front of barricades that blocked demonstrators from getting close to the building. Several law-enforcement officers were in the distance, but never came close to the protesters.

The group broke the silence with a series of speeches about police brutality and racism. Many protesters were angry about a confrontation during a protest more than a week ago during which tear gas was used against them.

Police Chief Brian Layton apologized for those actions last week, but his apology clearly had little effect on Monday’s protesters.

“It was a peaceful protest and all of a sudden people were being gassed and shot with rubber bullets,” a tearful Eddie Banks said. “They shot at us before we even touched anything. And we still haven’t touched anything.”

Speaker after speaker condemned police in general and said that if law enforcement isn’t defunded totally, the money that goes toward police should be cut considerably.

Protesters said city police do not need tanks, riot gear and military-grade equipment and the money for such items could better be spent elsewhere.

Cam Coates, a recent University of Mary Washington graduate and one of the leaders of Monday’s group, said the protests will continue until acceptable progress is made. There has been at least one protest march in the city every day for more than a week.

He said protest leaders have been talking with city and local leaders about getting together to discuss grievances and possible solutions, but it remained unclear Monday when those talks might take place.

It was a peaceful protest and all of a sudden people were being gassed and shot with rubber bullets. —EDDIE BANKS

What comes next in NY's investigation of Trump

Black Lives Matter demonstrators marched from City Hall to protest in front of the police station in Fredericksburg, Va. on Monday, June 8, 2020.

Eddie Banks leads a group of protesters on U.S. 1 as they march from City Hall to the police station in Fredericksburg.

Demonstrators sit in front of the Cowan Boulevard entrance to the police station in Fredericksburg,

Black Lives Matter demonstrators march toward the police station on Cowan Boulevard in Fredericksburg, where they found metal barricades.