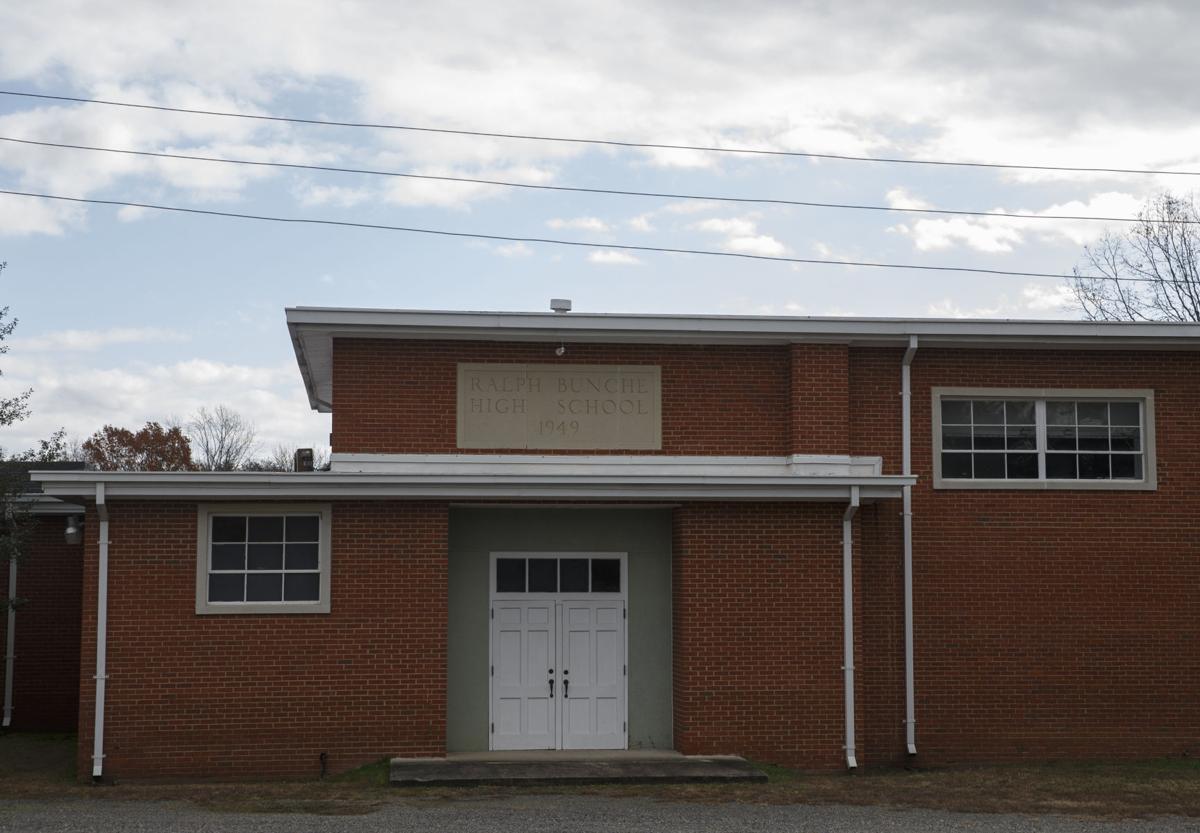 A $500,000 grant from the National Park Service will be used to replace the roof on the aging Ralph Bunche High School in King George. 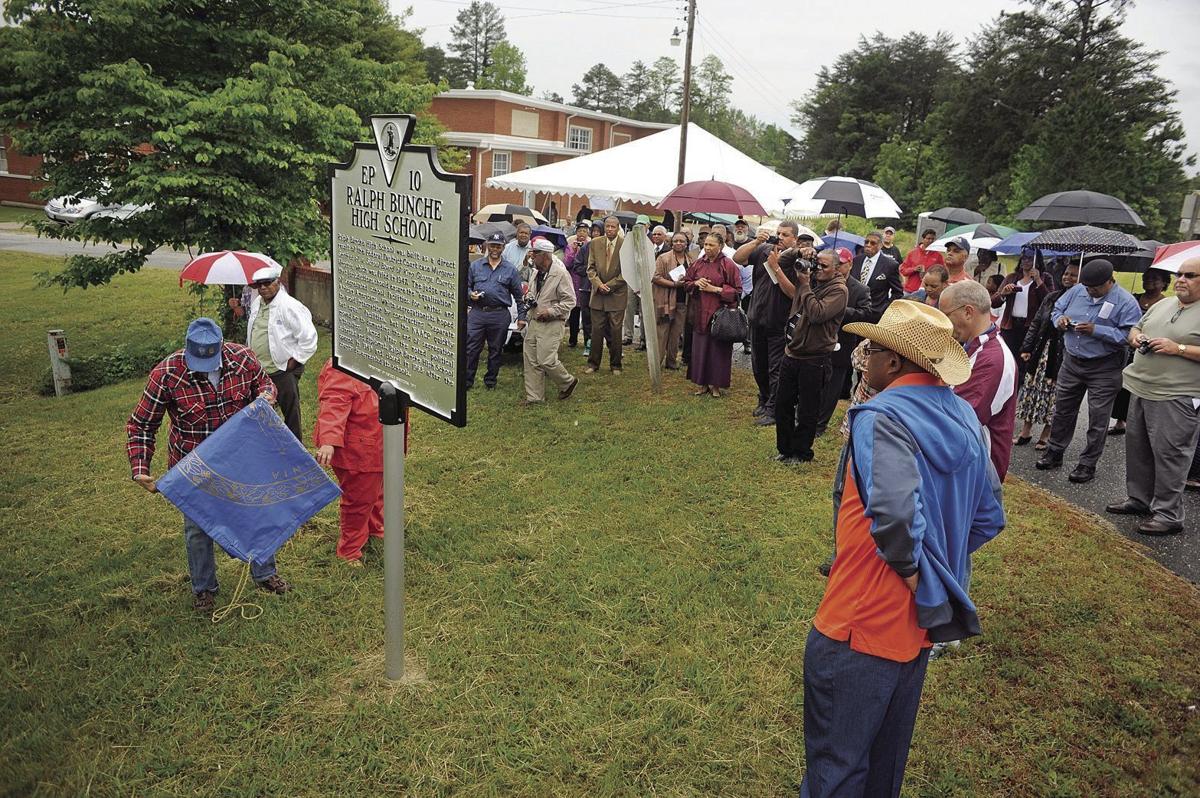 In 2013, a marker was unveiled to commemorate the history of Ralph Bunche High School.

After several failed attempts in recent years to find a private developer or nonprofit group to renovate the aging Ralph Bunche High School, the project got a boost last week from the federal government.

The National Park Service’s African–American Civil Rights Grant Program awarded $500,000 to King George County, which owns the property, to replace the school’s roof. The grant was one of 53 awarded in 20 states to help preserve sites and history related to the African–American struggle for equality, according to the NPS news release.

Annie Cupka, chairman of the Board of Supervisors and a former grant writer for the county, brought the awards program to the board’s attention last fall and got approval to submit an application. She said the county is thrilled the NPS “chose to recognize the historical significance of Ralph Bunche High School in this fashion.”

Repairing the roof is a “critical step towards mitigating further damage” and will aid in the efforts “to preserve and ultimately restore the building for the benefit of our community,” Cupka said.

“This is a momentous award to help preserve the school,” she said. “We’re all winners.”

The mission of the grant program seems similar to the county’s attempts to highlight the role the former school for Black students played in desegregation. When Virginia refused to integrate schools, Black families in King George sued for the county to build a separate-but-equal facility. Their actions brought about the 1949 opening of the high school, which served the county’s Black students until 1968.

The building was used for other purposes before it closed in 1998, and in recent years, its leaky roof has caused several problems, including mold.

Funds from the park service grant will be used to replace the roof and either replace or repair any damaged and deteriorated roof decks and overhangs. The grant also will cover the disposal of rooftop HVAC units and mechanical equipment, according to the application, as well as plans to mitigate any hazardous materials in the building.

While preserving the school is a “testament to how far we have come as a community state, and nation,” according to the county’s press release, finding the funds to stabilize the deteriorating building has been difficult. The county has entered into several partnerships with private entities, only to see efforts stall or fail, Supervisor Jeff Bueche said in June.

“It was not due to King George County’s actions, it was investors or something, whoever had the interest in it, either pulled out or found out it was not feasible, profitable, etcetera, etcetera,” he told fellow board members.

Earlier this year, the county notified the latest group attempting to renovate the building—the Ralph Bunche Arts and Humanities Center—that it hadn’t met the benchmarks spelled out in its May 2019 agreement with the county.

Speaking on behalf of RBAHC, Marsha Stonehill has spoken regularly during the public comment portion of Board of Supervisors’ meetings this spring and summer. She’s said her group is ready to move forward with fundraising but needs something more solid from the supervisors than a letter of intent to secure funds from donors.

Supervisors decided in June not to extend the agreement with RBAHC but to move forward with a new request for proposals “and see where we can go from there,” said Supervisor Richard Granger. He said the board “is really trying to find a way to get something done with the school,” but so many efforts have been unsuccessful.

Supervisor Jeff Stonehill, the husband of Marsha Stonehill, spoke to the ongoing frustration of failed attempts to renovate Ralph Bunche.

“We need to come up with a solution for this piece of property. I mean, it’s been going on and on, . . . the alumni are there and they’re not getting any younger,” he said.

Robert Ashton, the vice president of the county’s NAACP, wondered in April why the county has found funding for other capital projects but not the renovation of Ralph Bunche High School.

“Route 301 is a major thoroughfare and the sight of the Ralph Bunche High School building sitting there, just deteriorating, should say something to the leadership of the county,” he stated in an email. “What makes it a little unsettling on this issue is that surrounding counties have fixed up and completed their historical schools. We are in 2021 and King George County is still showing resistance.”

Supervisor Bueche said in June that it’s a matter of more pressing financial needs. He cited recent discussions with the School Board about the need for a preschool and elementary school—and that the preschool alone came with a $16 million price tag.

“With that in mind, I would say that right now, any county investment into something that isn’t serving our current population and our current students would be folly,” Bueche said.

The county will accept proposals for the renovation of the Ralph Bunche High School until Sept. 8.

A $500,000 grant from the National Park Service will be used to replace the roof on the aging Ralph Bunche High School in King George.

In 2013, a marker was unveiled to commemorate the history of Ralph Bunche High School.