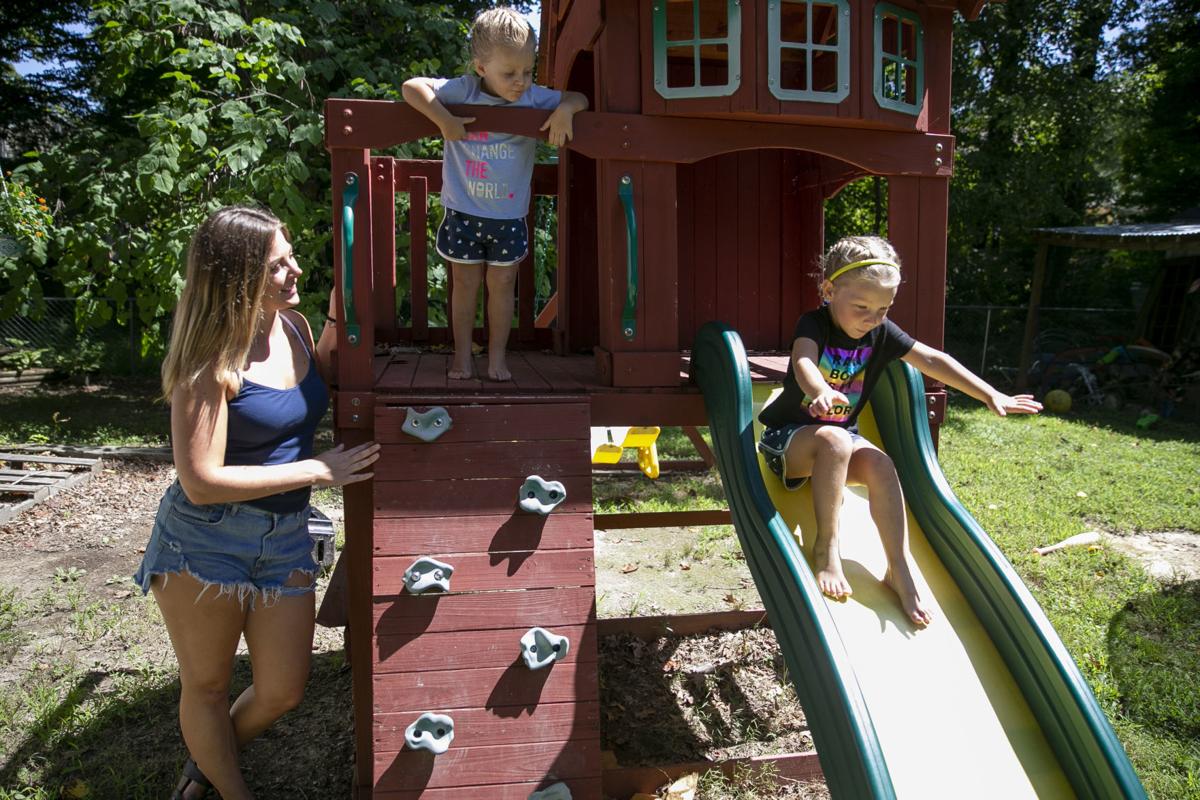 Smith, whose husband died in a car accident, supports her three kids with the help of her parents. 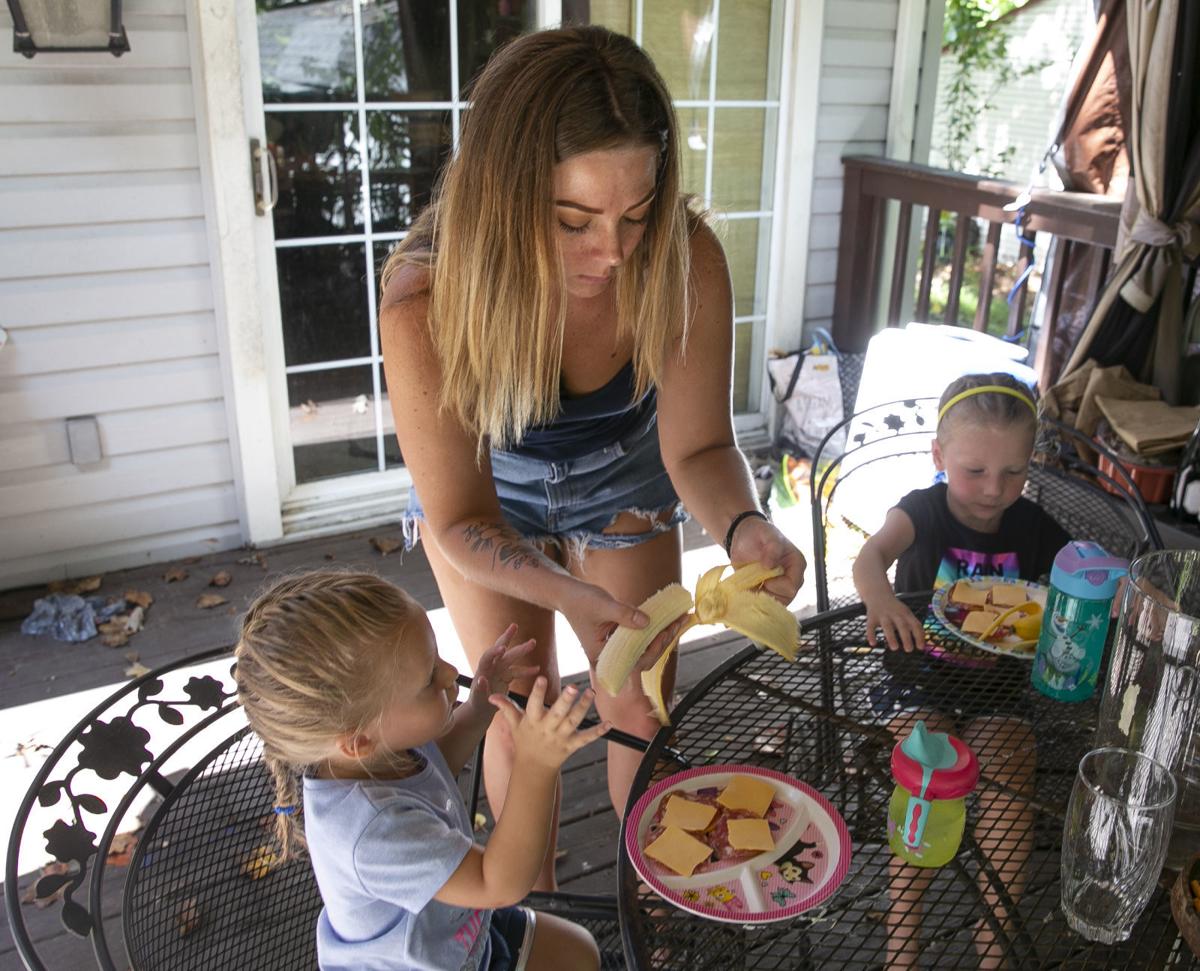 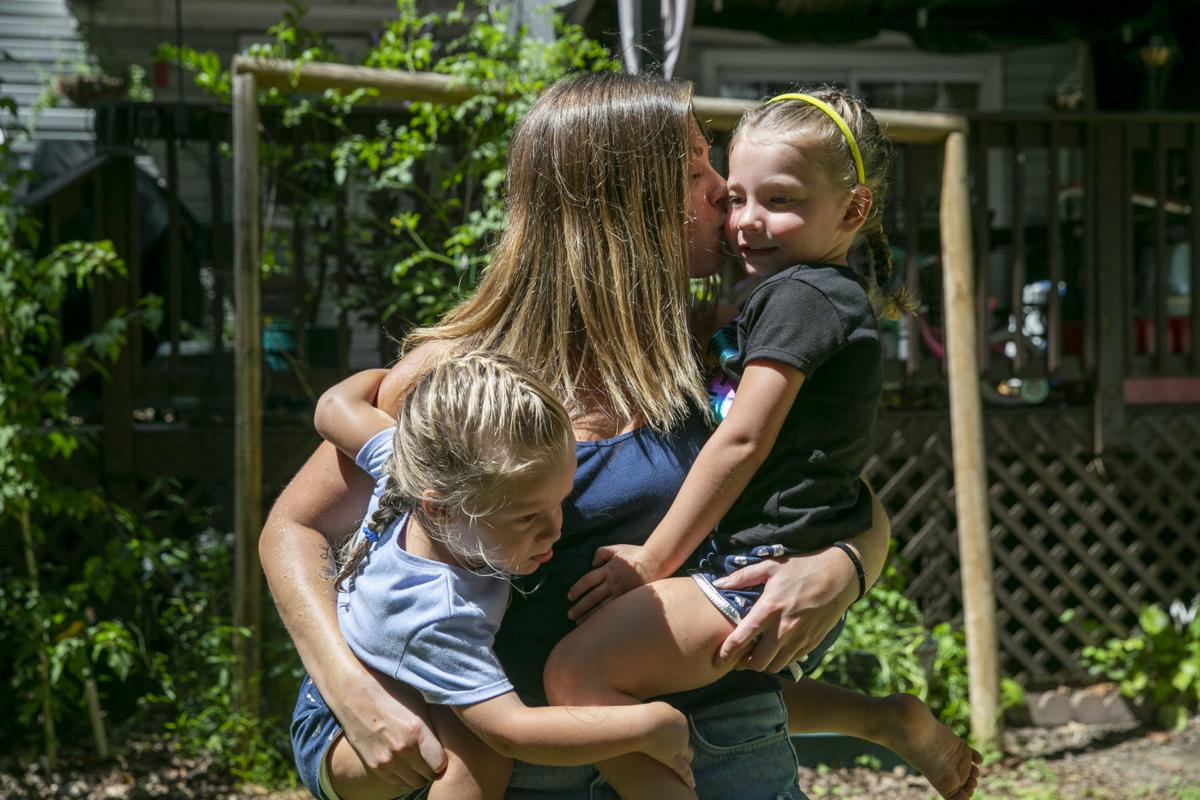 Cortnee Smith with daughters Arianna Wolfe (left), 2, and Aubree Wolfe, 3, at her parents’ Stafford County home. The 28-year-old moved back in with her parents after her husband died. 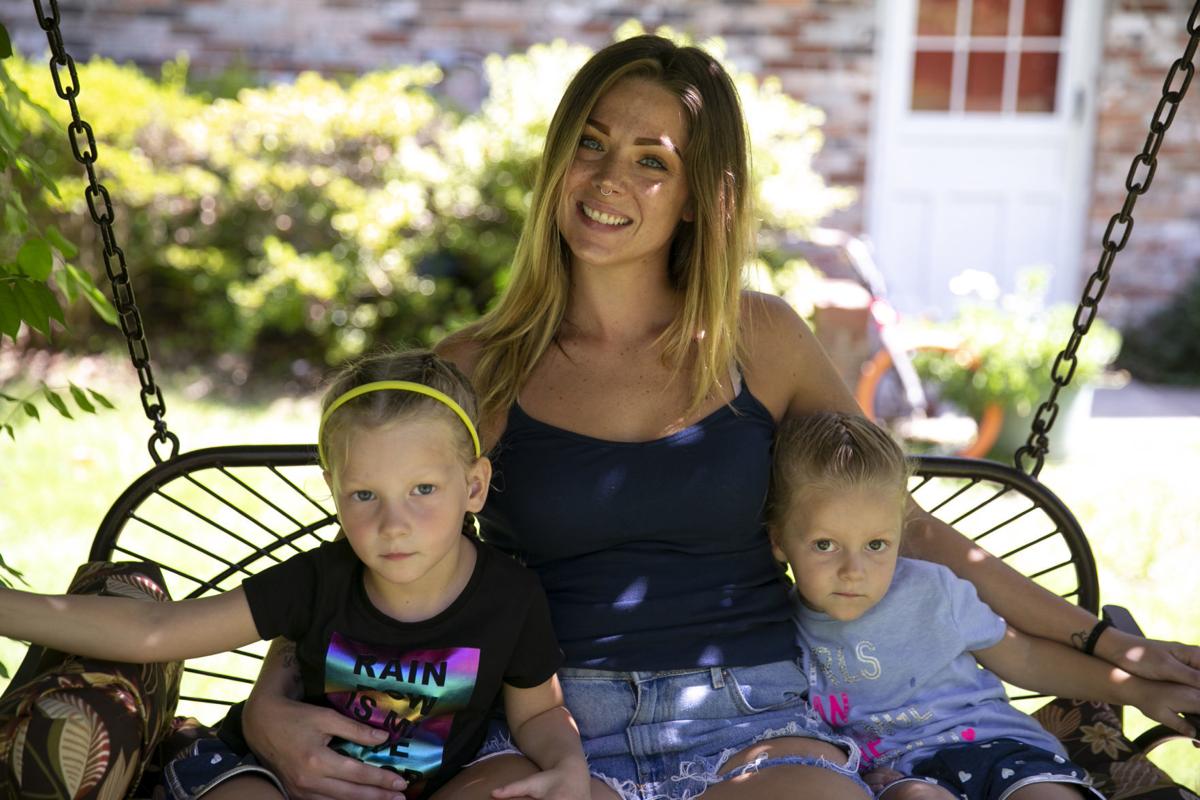 Cortnee Smith, with her daughters Aubree (left) and Arianna Wolfe, moved back in with her parents in Stafford, Virginia after her husband died in a car accident and her salary couldn’t support the daycare expenses for her three children. Her son Brady Smith, 7, is in elementary school.

Cortnee Smith’s monthly salary as a part-time event associate at a Fredericksburg wedding venue is $1,200.

The cost of full-time, home-based child care for the Stafford County resident’s three children—ages 7, 3 and 2—is $1,550.

After the death of her boyfriend and daughters' father in a car accident two years ago, Smith, 28, moved back in with her parents because, “without my parents, I can’t afford to put our own roof over our heads.”

Smith said she is looking for a full-time job, but added, “If it wasn’t for my family and their assistance, I would not be able to even afford to go to work.”

“Between the rate of pay in the region, the cost of living and the cost of day care, it is almost impossible for a single mother to provide on her own in this area,” she said. “As day care costs increase, it becomes even less forgiving. In this day and age, it’s a double-edged sword, a ‘damned if you do, damned if you don’t.’ ”

A recent report released by the National Women’s Law Center found that the cost of child care has grown by 37 percent to 39 percent over the past decade—while women’s wages have only grown by 5 percent in that time.

The report, “From Shortchanged to Empowered: A Pathway to Improving Women’s Well-Being in Virginia,” also found that the gender pay gap has narrowed by only 4 cents in the past 20 years. Women today are paid about 81 cents to every dollar paid to men, while in 1998, women were paid about 77 cents per dollar, the study found.

“The loss of earnin fish gs that results from the wage gap has real effects on women’s lives and the economy, as well as on the families that rely on women’s earnings,” the report states. “In Virginia, 61.3 percent of all mothers are primary or co-breadwinners in their families, meaning that mothers’ incomes are critical to their families’ economic security.”

The approximate dollar amount of the median gender wage gap in 2017 was $12,000, an amount that could pay for 10 months of center-based child care, according to the report.

The wage gap is bigger for women of color, with black women making 60 cents for every dollar paid to white men. Nationally, black women are more than twice as likely as white women to be the primary breadwinners in their families.

For a Virginia woman making an annual salary of $44,000, full-time child care for an infant would take up almost a third of her gross earnings.

“The cost of child care can cost more than a year of college and without the availability of low-cost loans,” said Carol Clark, executive director of Smart Beginnings Rappahannock Area, a local nonprofit agency that works to support early childhood education in the Fredericksburg area.

Full-time child care can be difficult to access and afford. Home-based child care is usually cheaper than center-based care, but the number of home-based providers in the area is dwindling, Clark said, due to HOA and licensing requirements.

The high cost of child care forces parents—and usually mothers—to ask whether they can afford to work.

“The prohibitive costs of child care force parents to make impossible choices between paying for care or paying for other necessities such as housing and food,” the report states. “In many cases, low-wage working parents may have to turn to lower-cost care, which may be lower quality and less stable and may not sufficiently nurture children’s growth and development or protect their health and safety.”

The report’s lead author, Julie Kohler, a fellow-in-residence at the National Women’s Law Center, said the cost of child care is not just a women’s issue, it’s a societal issue.

“For so many women who are the primary bread-winners and co-breadwinners, the cost of child care is just critical in order for them to maintain the employment that they need in order to support their families,” Kohler said. “If we believe that we need to support women’s employment and the ability of families to support their children, they need to be able to access child care that is both high quality and affordable.”

Clark said the high cost of child care is driven by staffing ratios required for certification. Child care providers are required to employ one caregiver for every four children between the ages of birth and 16 months. For toddlers ages 16 to 20 months, the staffing ratio is five children to one caregiver.

And because many people in the Fredericksburg area commute to Washington and Northern Virginia for work, local day care centers often must be open up to 14 hours a day, from 5 a.m. to 7 p.m.

“There is a lot of cost involved,” Clark said. “People who open preschools, even with full day care, often won’t provide infant or toddler care. If they do, that’s a break-even if a program is lucky, and usually it’s a financial loss. Basically they are providing a service to the community.”

“The other crisis alongside the affordability crisis is the fact that this is an industry that is really staffed on the backs of low-paid workers who are disproportionately women and women of color, and many times immigrant women,” Kohler said.

“We should not be trying to drive down costs and wages,” she said. “It just really speaks to a broken business model in child care. We can’t just be passing along costs to families. We really need to be looking at solutions for public investment.”

The National Women’s Law Center and other national advocates for affordable, accessible child care such as Child Care Aware and the After School Alliance, recommend that policymakers at the federal level increase public investment in child care by increasing support for funding streams such as the Child Care and Development Block Grant, the Social Services Block Grant, Temporary Assistance for Needy Families, Head Start and Early Head Start.

At the state level, solutions include increasing payment rates for child care providers serving families who receive child care assistance and providing tax credits to families, to teachers to increase credentials, to programs to increase quality and to businesses that support eligible child care expenses at child care centers.

However, the recent report found that state funding available for child care assistance was “woefully inadequate relative to need.” Only 5.1 percent of eligible children—and 1.3 percent of Latino or Hispanic children—receive assistance, the report states.

The Fredericksburg Department of Social Services provides assistance to 93 families representing 149 children each month, Executive Director Christen Gallik said. There are 16 families on the waiting list. The program paid $941,000 to child care providers in fiscal year 2017.

Smith said she has been on the waiting list for child care assistance in Stafford “over and over again since my oldest child [now 7] was a year old.”

Muse said there are 11 families representing 22 children on the waiting list right now.

Head Start and the Virginia Preschool Initiative provide preschool to eligible 4-year-olds, but Clark said fewer than half of those who qualify are actually enrolled.

Another problem, Clark said, is a lack of available space for holding these programs.

“Our public schools are overflowing due to the ever-growing population and the construction and building in our area,” she said.

Stafford County last year paid $7.2 million to purchase a shuttered Christian school and renovated it to house the school division’s early childhood education program for 3- and 4-year-olds with disabilities, and Head Start students from North Stafford.

Clark said she feels hopeful because there is bipartisan support in Virginia for supporting early childhood education.

In 2016, the General Assembly approved establishing a fund that would distribute six two-year grants each year of the 2016-18 biennium to “urban, suburban and rural community applicants” for supporting preschool services in their communities.

During this year’s session, the Senate passed a bill that would require the state superintendent of public instruction and the commissioner of social services to “convene a stakeholder group to consider the development of a statewide unified public–private system for early childhood care and education in the Commonwealth.”

The bill, SB 1095, was left in the appropriations committee of the House of Delegates at the end of the session.

Both houses did pass an expansion of the Education Improvement Scholarships tax credit program to include children whose parents were unable to obtain services through the Virginia Preschool Initiative. It will allow eligible pre-kindergarten children to obtain scholarships to attend preschool.

“I think that our state government has been focusing seriously on early childhood for the past few years,” Clark said. “Everyone recognizes that early care and education is fundamentally important for the development of our future work force.”

Two cases in the Fredericksburg region, one with a false negative and the other, a false positive, demonstrate the uncertainties involved with a relatively new virus like COVID-19.

Since March, 7,861 residents of the Rappahannock Area Health District have tested positive for COVID-19.

Fredericksburg health district ramps up for vaccine roll out

Fredericksburg restaurant delivering 225 free Thanksgiving meals to those in need

The Spotsylvania Planning Commission is recommending that supervisors approve a rezoning to allow  a mix of apartments, offices and businesses in a section of the industrial park on State Route 2/U.S. 17.

Black Friday may not be dead yet, but amidst the pandemic of 2020, the traditional day of huge sales and door-buster bargains seems a shadow o…

Smith, whose husband died in a car accident, supports her three kids with the help of her parents.

Cortnee Smith with daughters Arianna Wolfe (left), 2, and Aubree Wolfe, 3, at her parents’ Stafford County home. The 28-year-old moved back in with her parents after her husband died.

Cortnee Smith, with her daughters Aubree (left) and Arianna Wolfe, moved back in with her parents in Stafford, Virginia after her husband died in a car accident and her salary couldn’t support the daycare expenses for her three children. Her son Brady Smith, 7, is in elementary school.