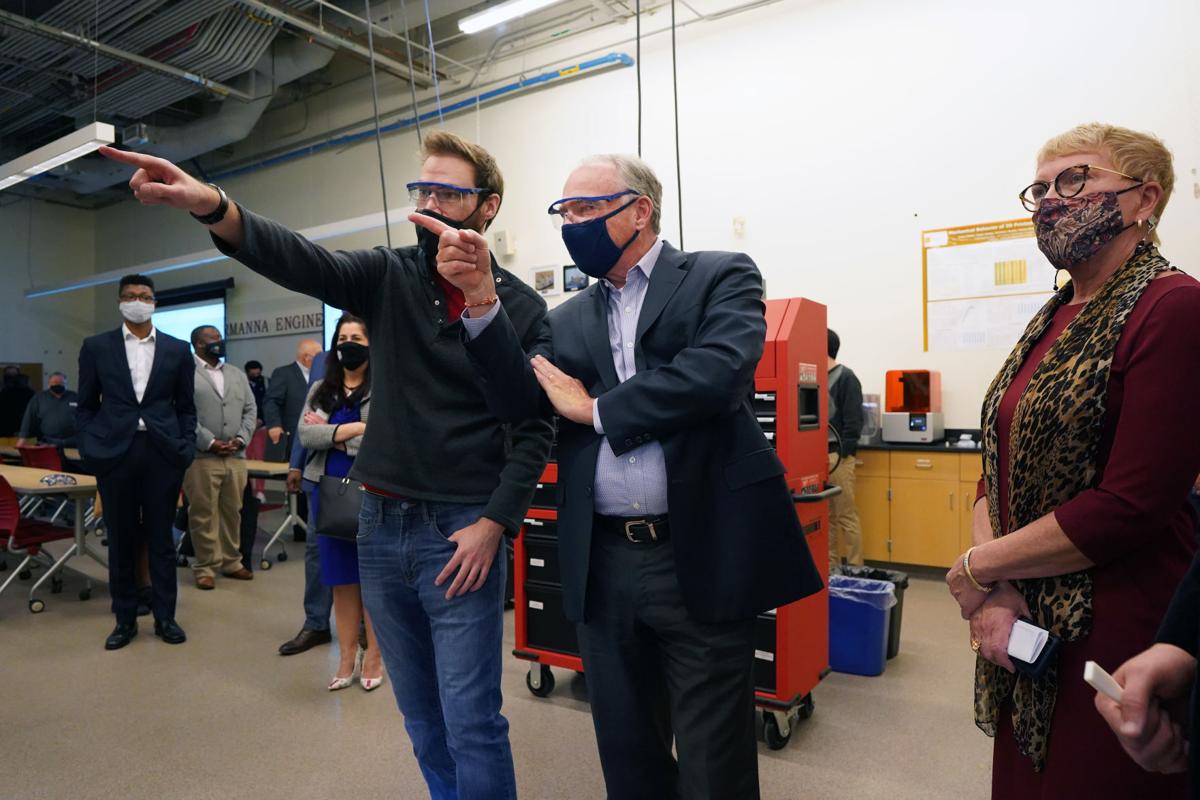 Kaine talks with Brooking Henshaw, an electrical engineering student from Stafford. GCC President Janet Gullickson is at right. Kaine says workforce training is a key part of the Build Back Better bill. 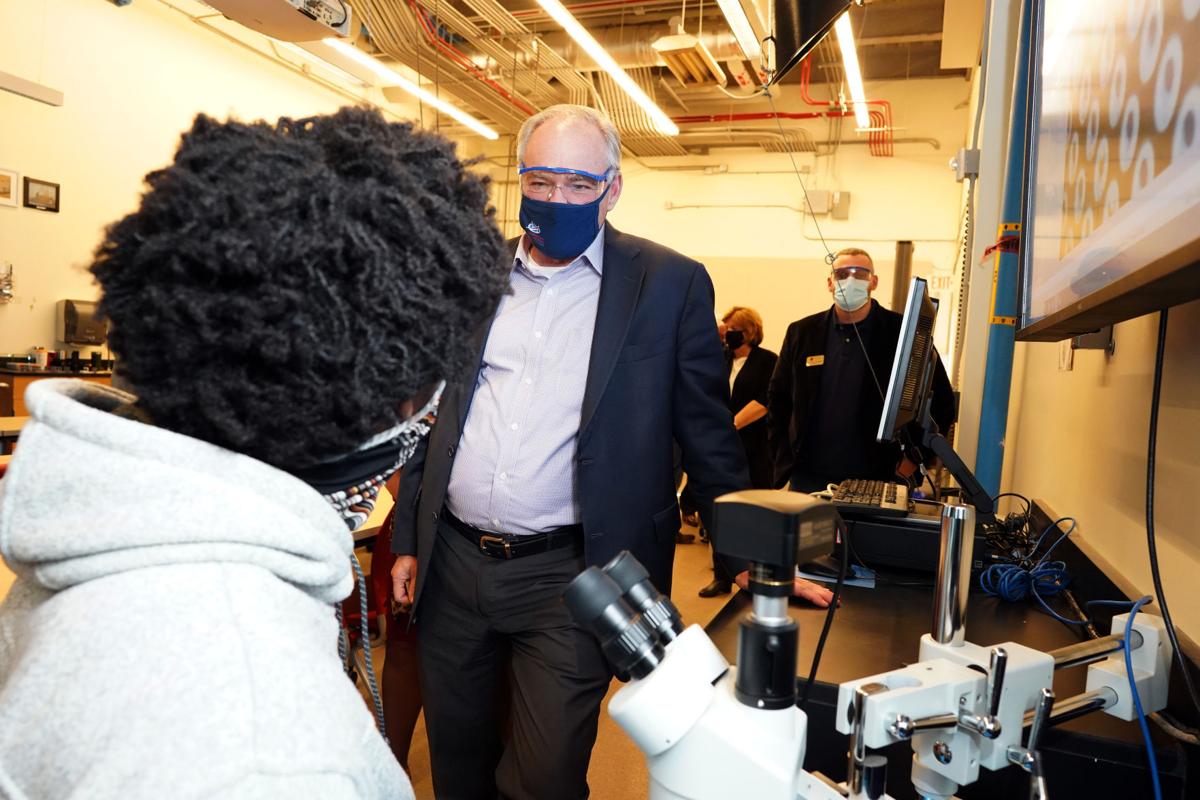 Sen. Tim Kaine talks with an engineering student at Germanna Community College Monday before a roundtable discussion there. 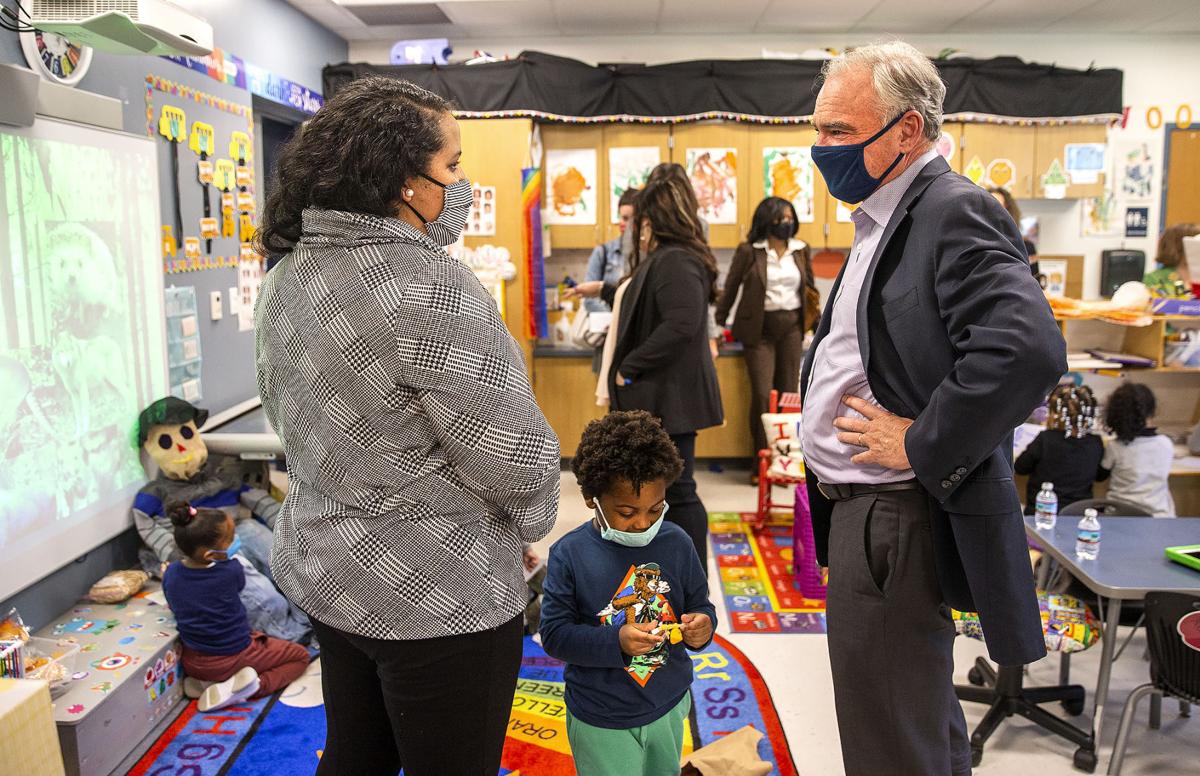 Sen. Tim Kaine talks with preschool teacher Scarlett Walker during his visit to the Walker–Grant Center in Fredericksburg to tout the Build Back Better Act. 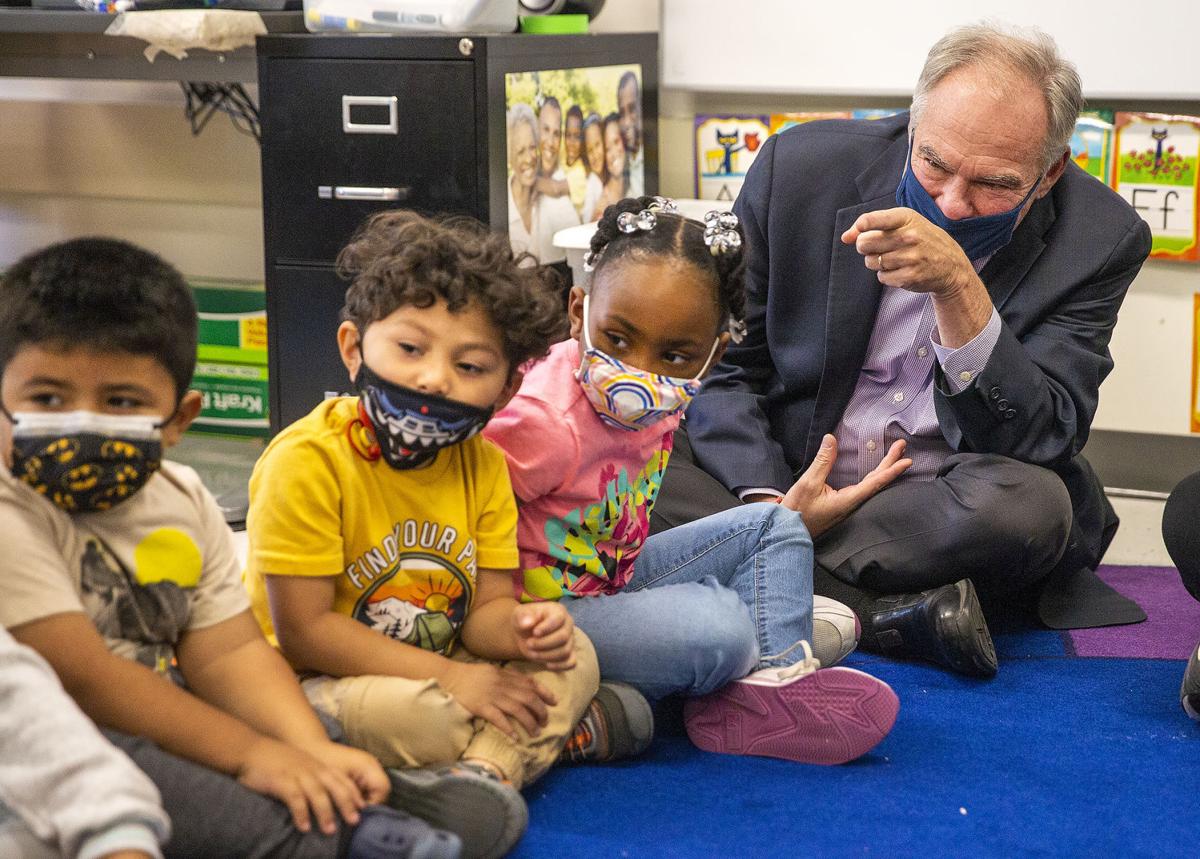 Sen. Tim Kaine visits with preschool students at the Walker–Grant Center. He was in town to talk about the benefits of the Build Back Better bill.

About 30 percent of the children in the city of Fredericksburg have no preschool experience before entering kindergarten because their families can’t afford it.

By the time they get to kindergarten, those children are already behind their peers and that deficit is difficult and costly to make up.

“This has been a concern of ours for many years,” Fredericksburg City Public Schools Superintendent Marci Catlett told U.S. Sen. Tim Kaine Monday during the senator’s visit to the city school division’s preschool programs.

If Congress passes the Build Back Better Act, which Kaine said Monday he expects will happen in early December, all children in Virginia will have access to free, quality preschool.

As a member of the Senate budget and health, education, labor and pensions committees, the Virginia Democrat has worked on crafting the Build Back Better Act, which would make significant investments in child care, early childhood education and workforce development.

Kaine visited the Walker–Grant Center, which houses the FCPS preschool programs, on Monday to talk about the investments in preschool and child care with division staff and leadership. He then traveled to Germanna Community College to discuss how the Build Back Better Act will fund more workforce training.

“I’m really excited about this,” Kaine said of the bill. “These are the two pieces that I have worked on the most.”

The early childhood component makes up 25 percent of the bill’s price tag, which is $1.75 trillion over 10 years, Kaine said. It will include funding to enable the states to offer free preschool to all 3- and 4-year-olds.

According to the Virginia Department of Education, 45 percent of kindergartners enter school without the literacy, math and social-emotional skills needed to be successful. Children from economically disadvantaged families and those with special needs are even less likely to be ready for kindergarten.

The states will have flexibility in how they broaden access to preschool, Kaine said. It could be through public programs such as Head Start and Virginia Preschool initiative, through private providers that meet quality standards, or a combination of both.

Kaine said the preschool funding is not a mandate and states can decide not to accept the money, but he expects Virginia will take it because of the demand.

In addition to preschool funding, the Build Back Better Act aims to make child care more affordable for families by capping the amount families spend on it at 7 percent of their income. Families up to a certain income level would receive any child care expenses that exceed 7 percent of income back in the form of a tax refund.

“What is keeping labor force participation down, especially for women?” Kaine asked. “Often, it is the lack of child care.”

According to the Economic Policy Institute, the average annual cost of infant care in Virginia last year was $14,063, and the average cost of care for a 4-year-old was $10,860. Even in places where child care is less expensive, it still eats up far more than 7 percent of a family’s income, Kaine said.

The child care funding will also “allow child care providers to pay higher salaries without passing the cost along to the parents,” he said.

Together, the investments in preschool and child care that are part of the Build Back Better bill will amount to “the biggest pro-child and pro-family investment Congress has ever made,” Kaine said.

“This will do for children what Social Security did for seniors,” he said.

Kaine said the delay in passing the infrastructure bill and the Build Back Better Act have been “frustrating,” but he believes the results of Virginia’s recent election, which handed the governorship back to Republicans after a decade in Democratic control, will “light a fire” for his colleagues in the Senate.

“The Virginia election result told my colleagues that we have to stop talking and do something,” he said.

He said there will be further negotiations, but he believes the early child hood component of the bill is safe and that he expects it to reach President Joe Biden’s desk early in December.

Kaine also took a few moments Monday morning to thank School Board members, for whom he said recent months have been hard.

“It has been a challenging, anxiety-producing time for families and it’s going to come out somehow,” he said. “I think School Board members have been bearing the brunt of that. I think all of us in public service will realize that 2020–22 was the hardest and also the most rewarding part of our careers.”

Monday afternoon, Kaine toured Germanna’s Fredericksburg area campus in Spotysylvania County and talked to cybersecurity and engineering students and with GCC faculty and staff. Local business people and who partner with GCC then joined faculty and staff at a roundtable discussion, where Kaine said the bipartisan infrastructure bill that passed last week means needed transportation investment for the Fredericksburg area and improved and more affordable access to broadband for people in the area who don’t have it.

“But if we just did the infrastructure bill, we would leave something out, because it doesn’t build itself,” Kaine said during the roundtable. “There’s got to be a workforce education component, and that’s the second bill, called Build Back Better, or reconciliation. I just call it the ‘education workforce bill,’ because the core of the bill is investment in education and workforce.”

Asking “if you’re going to do a lot of road work, who’s going to do it?” Kaine said funding is being proposed for training in workforce skills necessary to build bridges, fix roads and expand broadband. If approved, the bill would provide funds to train people for careers in high-demand fields such as cybersecurity. Kaine said both will be “very focused” on community colleges, with some funds channeled through the state and others through direct federal grants to the colleges.

He also talked about speeding up security clearance processes to help get cybersecurity students into jobs as interns.

“When young people have a clearance, it gives them something to hold onto,” said Vernon Green Jr., CEO of GCubed Inc., a business consulting company in North Stafford. “They say ... ‘I’m not going to get into trouble’ because they understand the value of that clearance to their future and they don’t want to lose it.”

Joe Caliri, president of Simventions, a defense contractor in Stafford, told Kaine he would hire 20 cybersecurity students “tomorrow” as interns working on software if grants were available to help students get training and the red tape involved with security clearance was lessened.

“Every year, thousands of people leave the military in Virginia with various levels of security clearances,” she said. “Many of them are underserved educationally. I would love to pilot a program in Virginia that would put them into certification programs and get them out into the workforce ASAP. Why are we letting service members with security clearances [leave Virginia]?”

Tweed proving itself as a sustainable fabric in high demand

Tweed proving itself as a sustainable fabric in high demand

Kaine talks with Brooking Henshaw, an electrical engineering student from Stafford. GCC President Janet Gullickson is at right. Kaine says workforce training is a key part of the Build Back Better bill.

Sen. Tim Kaine talks with an engineering student at Germanna Community College Monday before a roundtable discussion there.

Sen. Tim Kaine talks with preschool teacher Scarlett Walker during his visit to the Walker–Grant Center in Fredericksburg to tout the Build Back Better Act.

Sen. Tim Kaine visits with preschool students at the Walker–Grant Center. He was in town to talk about the benefits of the Build Back Better bill.