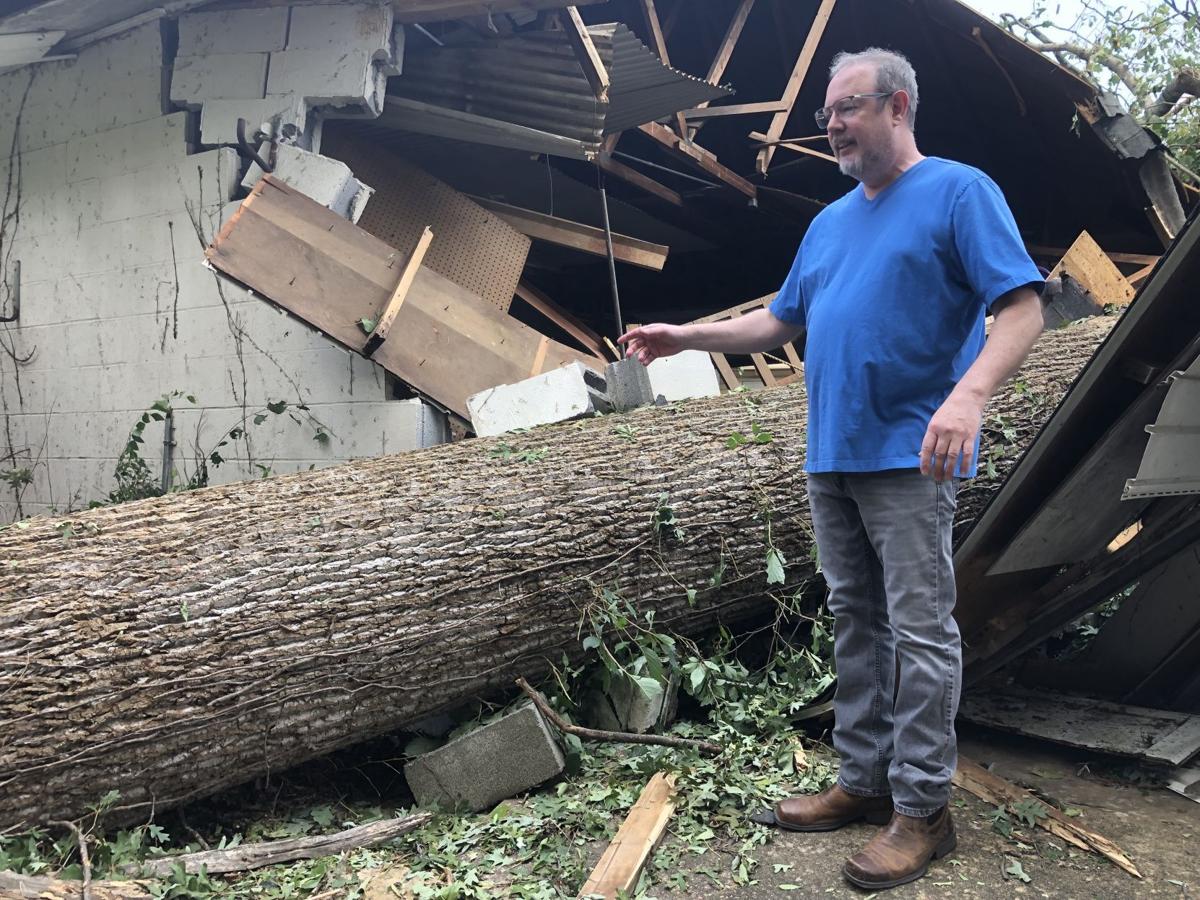 Mike Musatow examines a poplar tree that crushed his garage in southern Stafford. 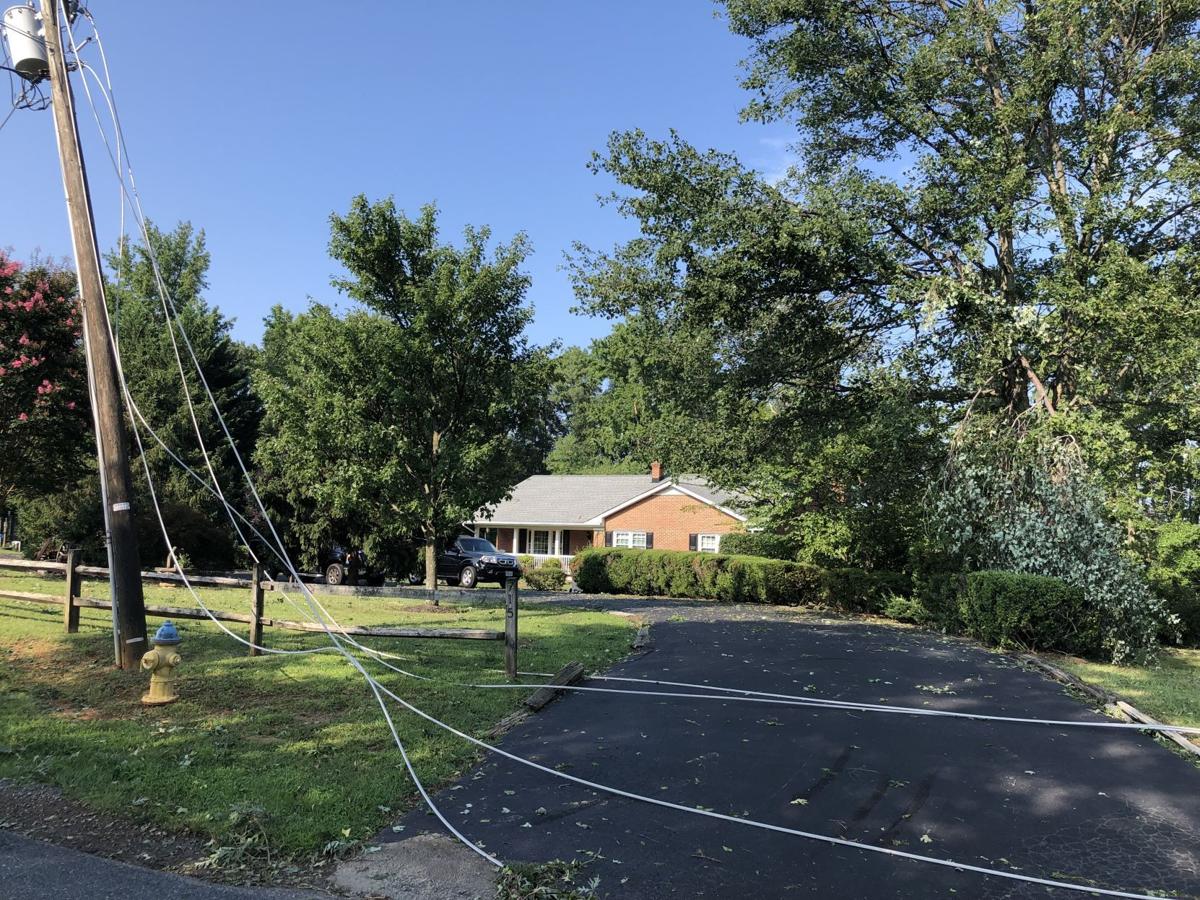 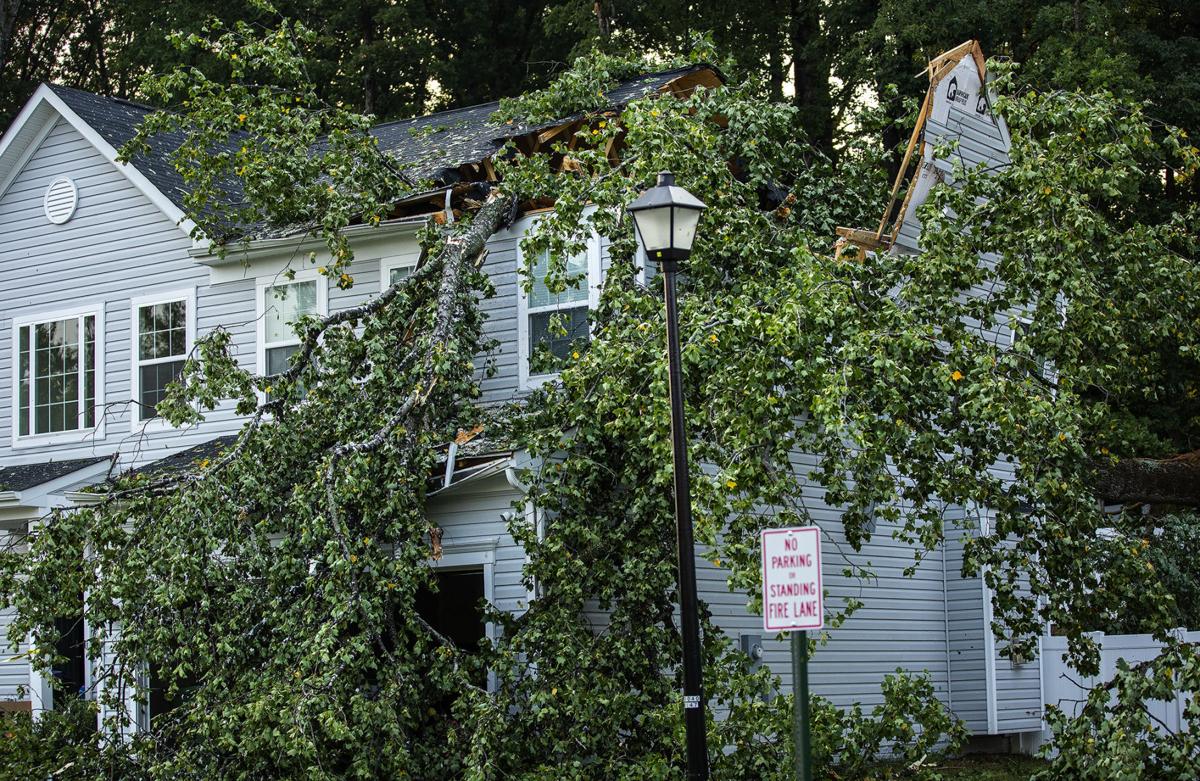 A large tree, felled by high winds from a powerful thunderstorm, crashed through the home where Shay Stapleton and her children were sheltering. 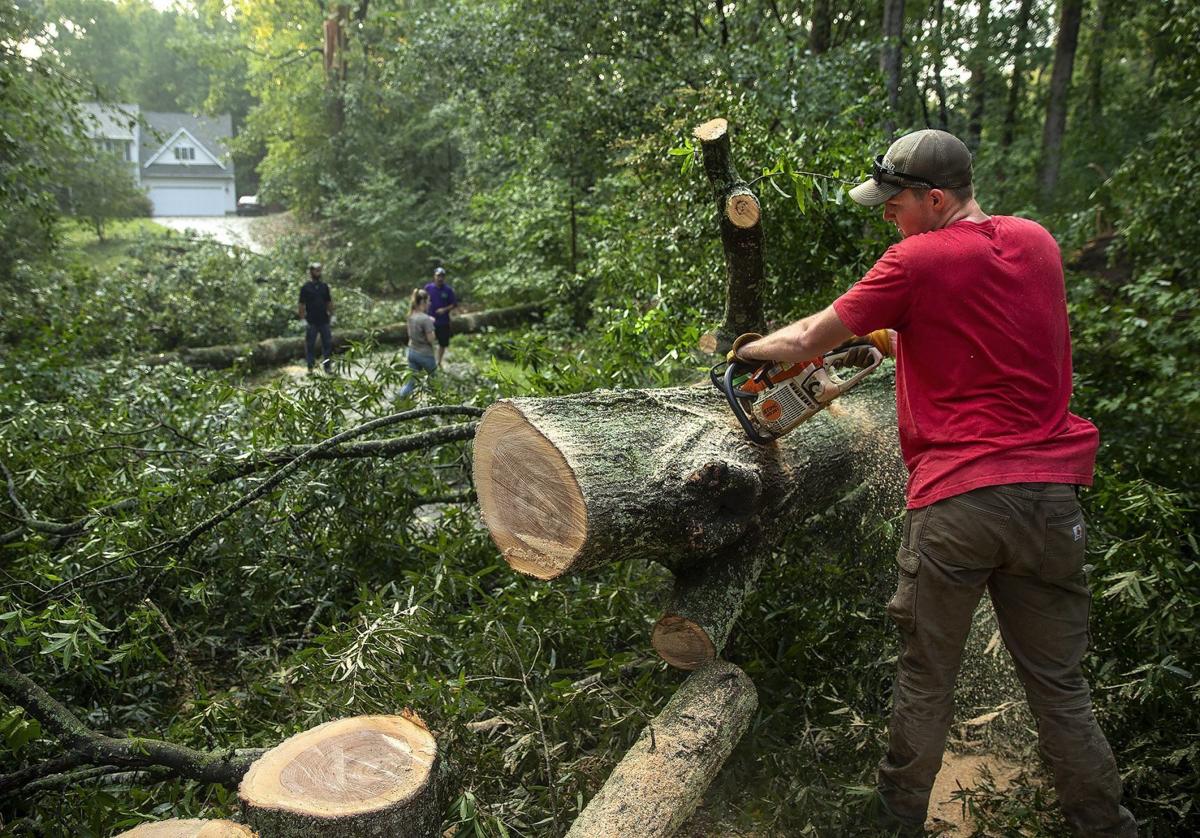 Charles Sterne, a deputy with the Stafford Sheriff’s Office, clears one of several limbs block the driveway of a home on Beagle Road in south Stafford on Thursday, July 29, 2021. 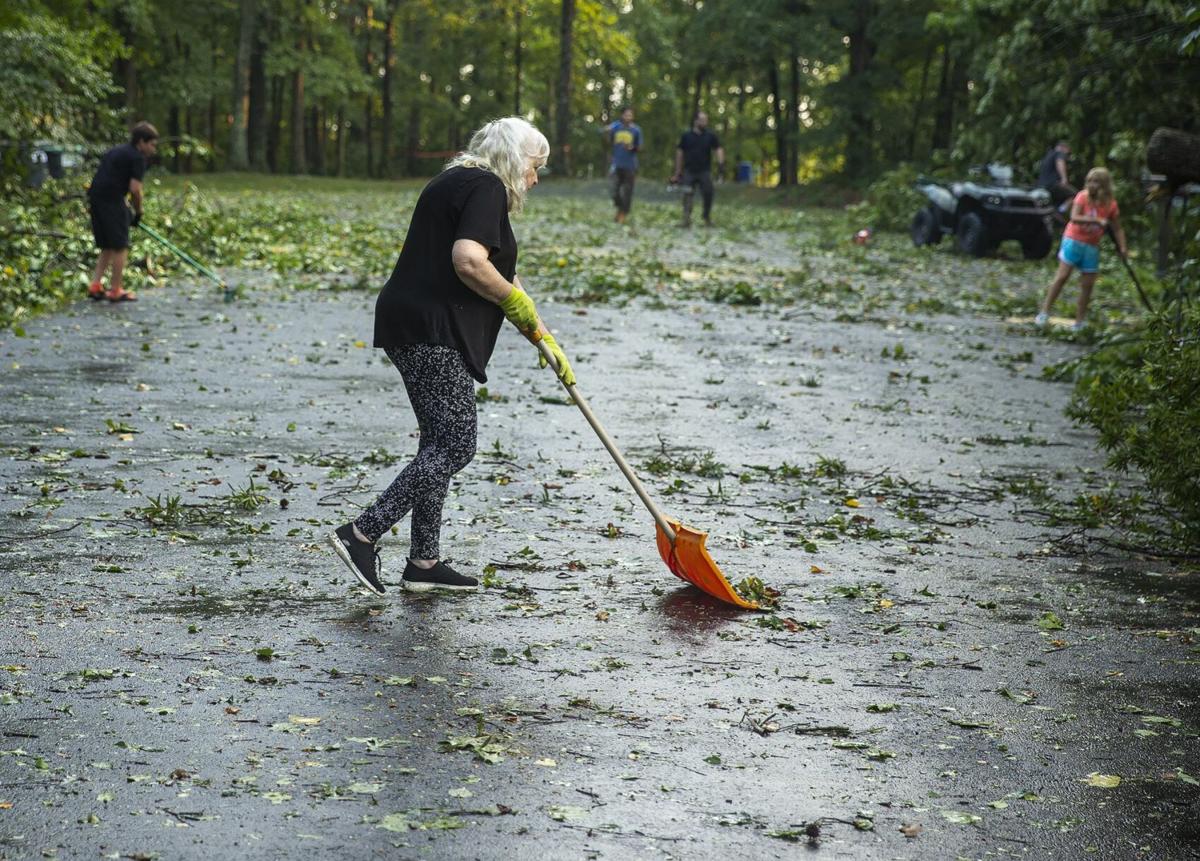 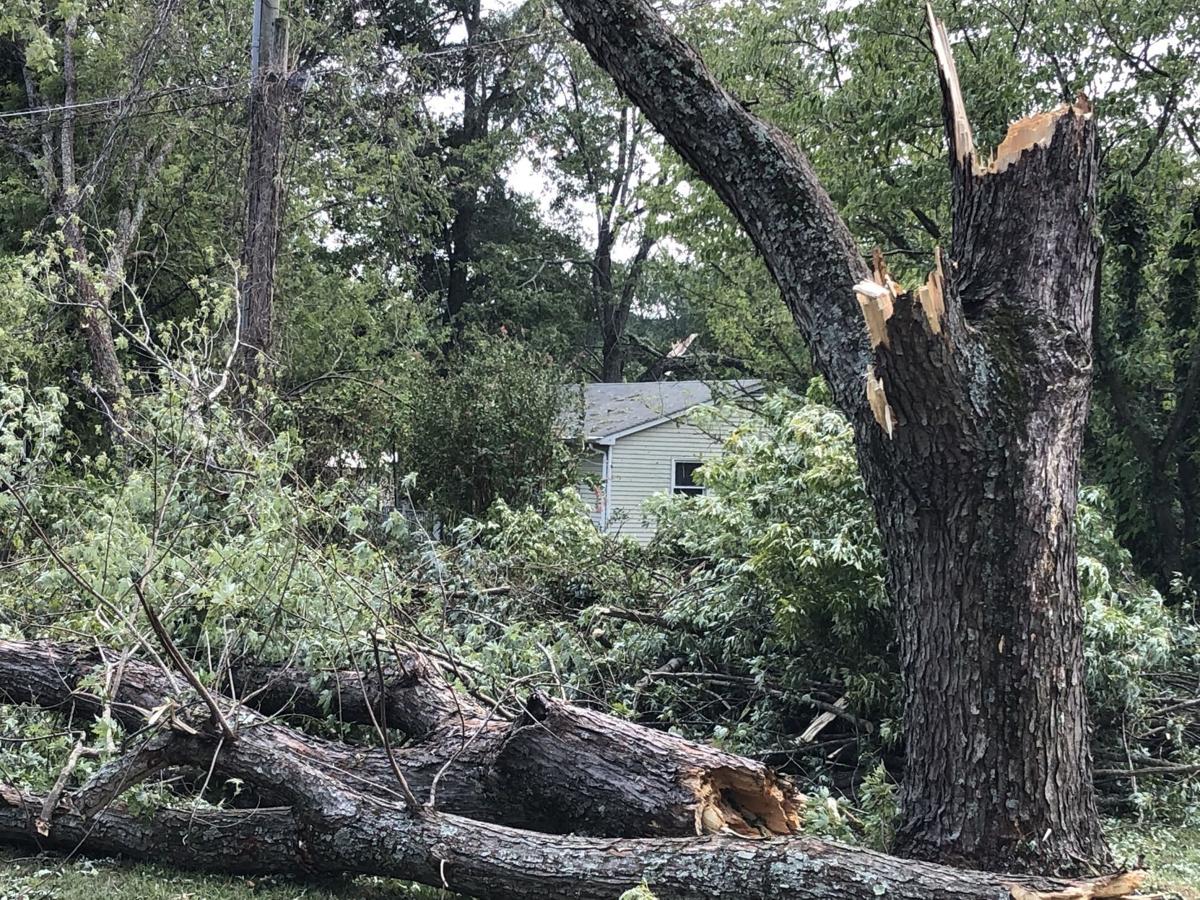 “There is a possibility there was a tornado,” said Jeremy Geiger, a meteorologist at the National Weather Service office in Sterling. “It hasn’t been confirmed yet.”

The storm initially left thousands of residents without power, which was partially restored for many by midnight. By 1 p.m. Friday, Dominion Energy reported 135 customers near Falls Run Drive and some homes along Truslow Road and near Falmouth Elementary School were still without power, along with much of the Widewater peninsula.

Thursday’s storm came shortly after 6 p.m. in Falmouth and moved along the U.S. 17 corridor. Stafford officials said they received reports of “significant impacts to residential structures” in an area stretching from Truslow Road to Enon Road near U.S. 1. No significant injuries or deaths were reported, but there was property damage.

“Spring Valley, Truslow, Beagle Road, those are the majority of the places that got hit,” said Billy Kelly of Tree Times Tree Service in Stafford. “This is the worst storm locally since Hurricane Isabelle.”

Kelly said had 16 crewmen working as the sun came up Friday. By midday, he said the crew still had a full day of work ahead of them.

“We’ve got 16 claims at homes and we are now on number 9,” said Kelley. “The phone’s been ringing off the hook all day.”

Geiger said two meteorologists from the weather service spent most of Friday in Stafford assessing the aftermath of the storm and gathering photos. He said a detailed report of their findings is expected late Friday or Saturday to determine if a tornado touched down in the area.

“I would say there could be 75, 80 mph winds potentially that went through that area,” said Geiger.

Geiger said winds were clocked at 40 mph at the Stafford Regional Airport around 5:30 p.m., but as the storm progressed, winds rapidly reached strong gusts that ushered in about 1 1/2 inches of heavy rain mixed with hail directly over Falmouth. It all happened quickly.

Ginger Wible, who lives in the 700 block of Truslow Road, had a large tree fall on her home and also had significant damage elsewhere on her property.

“The tree caved in my front door and flipped my husband out of his chair onto the floor,” said Wible, who raises horses and grows Christmas trees on her property.

“Every single one of our 50-foot Christmas trees are over there on their side,” said Wible. “My 50-foot round-ring for my horses is completely caved in and all of the cushions from my [outdoor] furniture ended up at my neighbors.”

Mike Musatow, who lives near Wible in the 600 block of Truslow Road, discovered he had a mature poplar tree fall through the roof of his detached garage. He said he took all the necessary personal safety precautions before the carnage began.

“I got the warning over my phone, so I took the dog and we went downstairs,” said Musatow. “I was looking out the window and the hail got bigger …. It was like we were underwater, you couldn’t see anything.”

Although he sustained significant property damage, Musatow has a positive outlook on what lies ahead.

Stafford first responders said they had a hectic evening that lasted well into Friday, but kept pace with the flurry of calls that poured in. Fire Chief Joseph Cardello said his crews determined the storm left four Stafford homes uninhabitable, while damage varied at many others.

“The damage path was almost 2 square miles, and that’s pretty significant,” said Cardello. “There’s lots of property damage–sheds, fences, cars were hit with branches and trees—but no one got seriously injured, and there was no loss of life.”

Geiger said cooler temperatures and rain will make their way back to the area over the weekend.

“The next two days, we’ll see temperatures dropping down to the lower 80s, a big change of pace compared to the last month,” said Geiger. “On Sunday, from morning until early afternoon, we could get some steady rain.”

Mike Musatow examines a poplar tree that crushed his garage in southern Stafford.

A large tree, felled by high winds from a powerful thunderstorm, crashed through the home where Shay Stapleton and her children were sheltering.

Charles Sterne, a deputy with the Stafford Sheriff’s Office, clears one of several limbs block the driveway of a home on Beagle Road in south Stafford on Thursday, July 29, 2021.