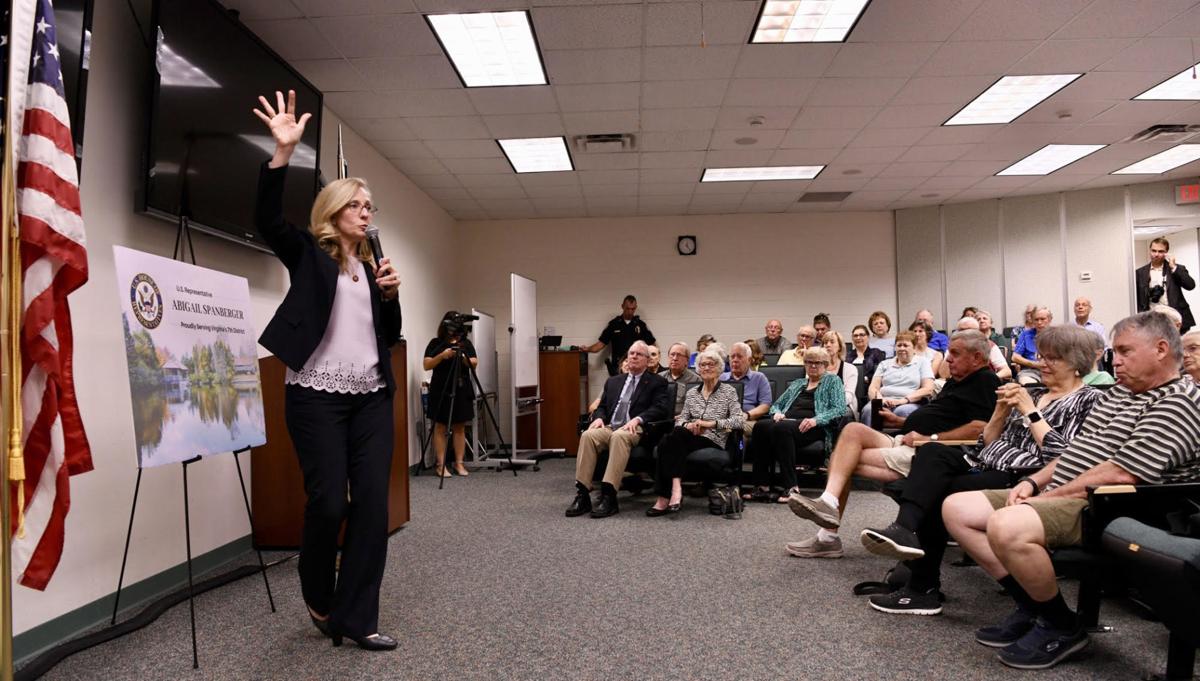 Rep. Abigail Spanberger gestures toward a constituent during a town-hall meeting in eastern Orange. 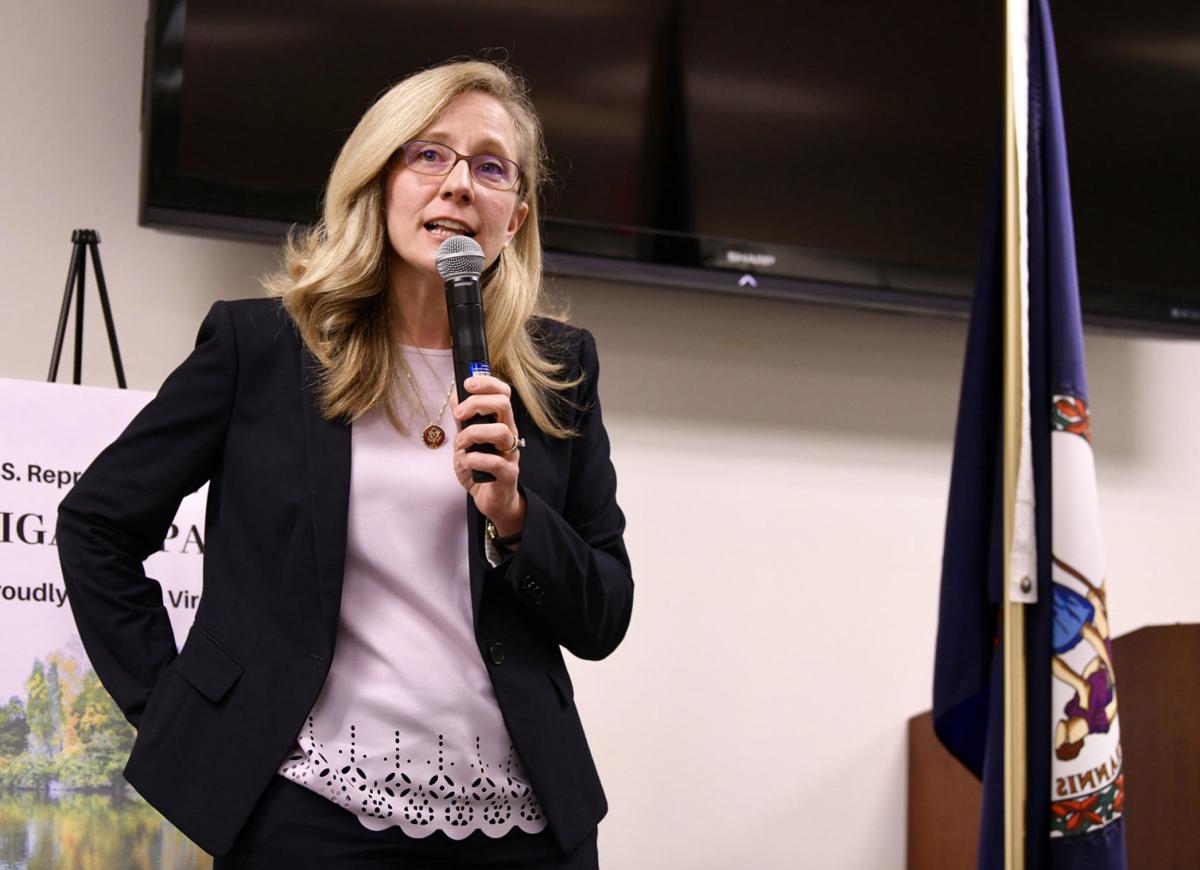 Marty Caldwell of Orange County asked her, in so many words: What’s it going to take to get you to back the U.S. House of Representatives’ impeachment inquiry of President Donald Trump?

“This is an area where there’s been a lot of confusion,” Spanberger replied, after a big sigh. “Some of that is because there isn’t a lot of clarity coming out of Washington.”

Nadler said that request was in connection with an investigation that could lead to articles of impeachment. Last week, he affirmed that position, Spanberger recounted. Now, members are waiting on the results of the committee’s subpoenas for documents and witnesses.

“My position is that I support the process,” she said. “It is a long and slow process, which I know is challenging for many people. But ... members have a responsibility to follow that process.”

“The House of Representatives must do the full due diligence possible to ensure that every piece of evidence—for or against, supporting or not—is available for every member of Congress that may take that vote [on impeachment].”

After Caldwell challenged her stance, Spanberger said she doesn’t think it is up to her, as a member of the House’s Agriculture and Foreign Affairs committees, to push the Judiciary Committee on the issue.

House members who have publicly advocated for the inquiry have also urged impeaching the president, she noted.

“I think it is irresponsible for any member of Congress—without all of the evidence, without even knowing what articles (of impeachment) might be put before them—to advocate for such a significant step,” Spanberger said.

The next questions brought the conversation back to less incendiary concerns: conflicts of interest, prescription drug prices, immigration policy, election security, and so on.

“You’re a refreshing change from most of our politicians, actually interacting with us,” Brown told Spanberger. “I strongly encourage you to focus on real issues that affect real constituents’ lives, as opposed to this ridiculous impeachment thing.”

Brown then asked the representative her position on campaign-finance reform and Washington’s revolving door, through which congressional and presidential staff can jump to well-paid corporate jobs.

“A member should not be able to leave Congress and go straight to a lobbying job,” Spanberger answered Brown. “That is a significant conflict of interest. It’s undeniable that one would hold great sway over one’s former colleagues and friends.

“There are major provisions we can put in place, many of them are in H.R. 1, affirming that those we’ve elected to office should be held to the highest ethical standard. They should be willing—through financial disclosures and through their employment opportunities—they should demonstrate that they are putting service to country above anything else.”

Spanberger said she has long advocated for campaign finance reform, even before she was elected. From her travels across Central Virginia, it’s clear that many people question the motivations of the officials who represent them, she said.

As a House member, she voted for Congress’ largest-ever such measure, H.R. 1, a package including provisions to ensure transparency on where dollars are spent and to protect U.S. elections from foreign interference.

“Election security is a priority issue for me,” Spanberger said.

She noted that she introduced an amendment—passed and incorporated into H.R. 1—that would require the director of national security to report to states on external threats to upcoming elections. But it doesn’t appear H.R. 1 will be allowed to come to a vote in the Senate.

So Spanberger introduced a standalone bill to carry forward her DNI provision, which she called a “vitally important” proposal. That bill—her Securing Elections through Intelligence Act—has been included in the House Blue Dog Coalition’s proposed election-security package.

This weekend near the Orange-Culpeper line, Spanberger kept the vow she made soon after taking the oath as a member of the 116th Congress. She held her 10th town-hall forum, one in each of the sprawling 7th District’s 10 counties, which are mostly rural but include some suburban locales.

While campaigning against GOP incumbent Dave Brat, Spanberger had pledged to be more engaged with the 7th’s residents, open to conversation with them, and active on issues they say matter to them. Then, during her first town hall, on Feb. 19 in Goochland County, she promised to hold similar forums in all of the Central Virginia district’s localities.

On the college campus in eastern Orange, the self-described “passionate pragmatist” kept her promise. And afterward, said she plans to continue meeting regularly with constituents, perhaps in more forums focused on one issue.

Starting out Sunday’s meeting, four members of local Girl Scout Troop 7395 led the audience in standing and reciting the Pledge of Allegiance. Afterward, the young scouts briefly plugged their campaign to educate people about the risk of food dyes, which they said can trigger food allergies. Their advocacy has earned them bronze and silver scouting awards, Spanberger noted.

She thanked the 100-or-so people who attended from Orange, Culpeper and Spotsylvania counties despite commitments to church services or football games. A majority were senior citizens, a mix of Democrats, independents and some Republicans.

Lake of the Woods, a gated subdivision near the forum’s venue, Germanna’s original site in Locust Grove, is home to thousands of retirees; it is Orange County’s largest single community.

Asked by a Spotsylvanian about reining in the national debt and federal government’s deficit spending, Spanberger displayed some fiscal hawkishness.

“I am deeply concerned about the fiscal trajectory of our country, she said. “As a former CIA officer, to me, our debt and rising deficit are national security risks.”

The largest holder of U.S. debt is China, the U.S. government continues borrowing from foreign lenders, and is making no plans to stop, she said.

Spanberger noted that she voted against the budget compromise crafted by House Speaker Nancy Pelosi and Minority Leader Kevin McCarthy.

“It was a bit of a backroom deal” that didn’t reduce the national debt, she said. “We were just putting more money on the credit card without so much as a conversation with those of us who prioritize fiscal responsibility and long-term strategic planning on how we dig ourselves out of this hole. ... We’re making our kids and our grandkids pay for it.”

Two constituents asked her about immigration and gun control.

“We can recognize that these are really difficult issues and, for many people, very emotional issues,” she replied to one questioner. “Then we stop and take the emotion out of it, and have a rational conversation about how our legislation can impact people’s lives.”

Spanberger said she grew up in a firearms-owning family, carried a firearm as a federal agent, and respects responsible gun ownership. But most Americans favor gun-purchase background checks and red-flag laws, she said.

She called for comprehensive immigration reform, and noted she cosponsored a bill to keep migrant families together when they’re taken into federal custody at the border. Spanberger said she supports upholding U.S. laws on immigration, but “with American values.”

Even on such tough issues, Americans and their representatives “can find more commonality,” she said.

But she said she recognizes many of the challenges posed by climate change and sea-level rise—their impacts on the economy; young children’s respiratory health; Virginia tourism; and national security, as communicated by the Navy.

The Conservation and Forestry Subcommittee Spanberg chairs has held a hearing on carbon sequestration through farm practices. She said she favors strengthening the electrical grid, improving battery storage, and supports more use of wind and solar energy, and opposes drilling off Virginia’s coast.

“It is clear to me after sitting through this town hall that Abigail Spanberger is out of touch with the voters in her district,” Horne said on behalf of the Ramirez campaign.

Rep. Abigail Spanberger gestures toward a constituent during a town-hall meeting in eastern Orange.