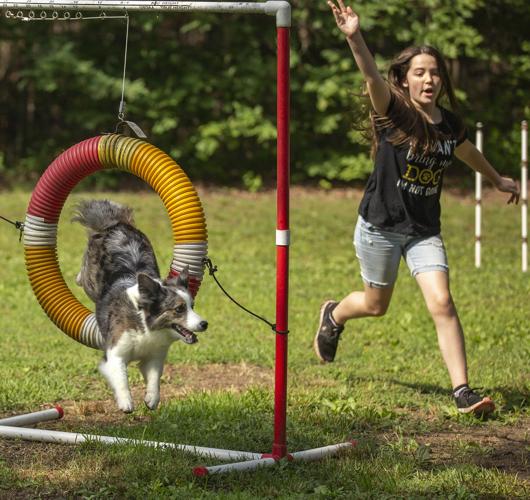 Chloe Bales, 12, guides Nova through an agility course at her family’s Spotsylvania County home on Wednesday. 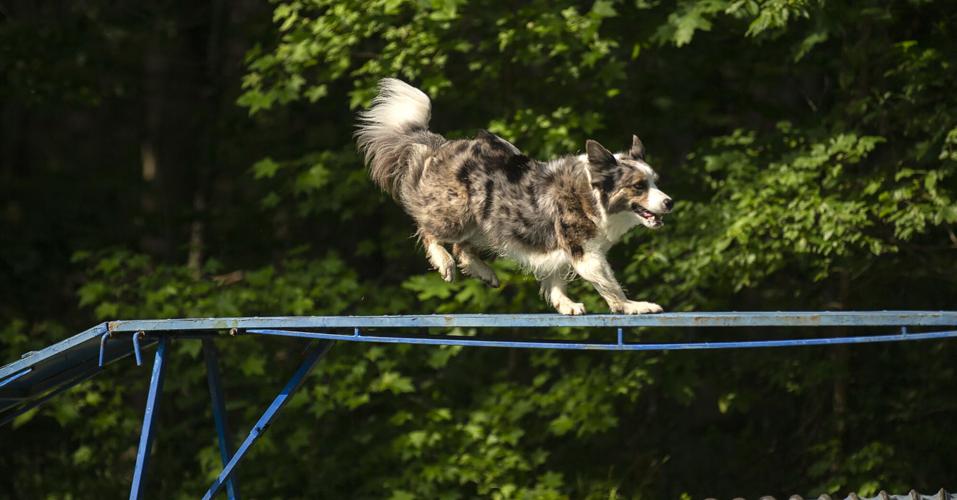 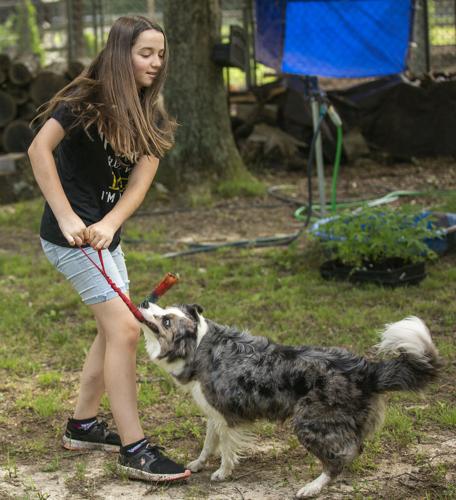 Some dogs are rewarded with food; Nova prefers to tug on a toy with her handler, 12-year-old Chloe Bales. Here, they play in the family’s backyard. 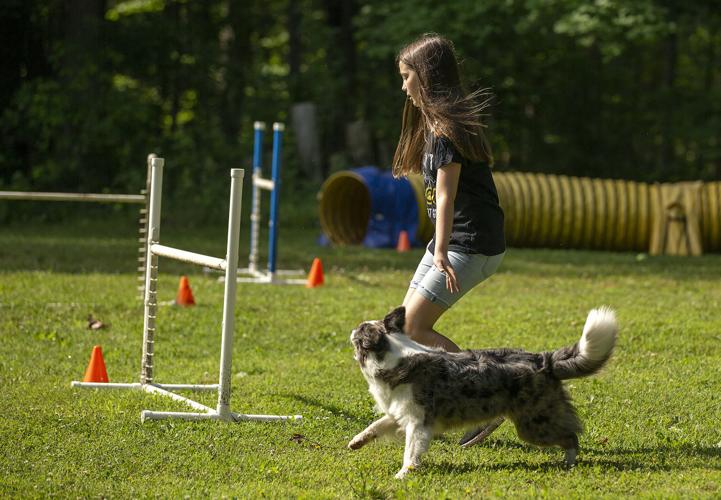 Chloe Bales, 12, does agility training with her dog Nova at her family's Spotsylvania County home on Wednesday, June 15, 2022. Bales has been selected to be on the American Kennel Club's 2022 Junior Agility Team and will travel to Finland next month to compete in an international agility event.

Shown here at a competition when she was 5, Chloe has been around border collies her whole life. 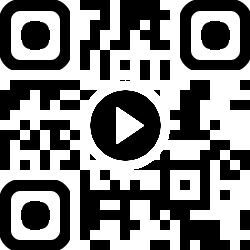 VIEW: To watch Chloe Bales train with Nova, point your smartphone camera at the QR code, then tap the link.

Chloe Bales is a low-key kid with a high-energy border collie named Nova, and the pair will compete in an international contest next month that’s “kind of like the Olympics for dog sports.”

But the mom never undertook the kind of trip she, Chloe and Nova will make on July 10. They’ll travel from their Partlow home in Spotsylvania County more than 4,300 miles to the Junior Open Agility World Championship in Vantaa, Finland.

There, Chloe and 22 other junior handlers and their dogs will compete against teams from across the world. Chloe’s dad, Bret, and 7-year-old sister, Baylee, will stay home because the family already must raise more than $6,000 to cover travel expenses for Chloe, her mom and Nova.

The American Kennel Club’s USA Junior World Agility Team doesn’t have sponsors, but members of the group—the only such team in the country—do their own fundraising.

“There is no such thing as dog agility at the Olympics, but to the 23 junior handlers and their K-9 companions who have been selected to represent the USA in Finland, this is just as spectacular,” according to the AKC.

When the team was picked in February, Chloe was 11—the youngest member selected. She’s since turned 12, and while the rising seventh grader at Post Oak Elementary School looks forward to the adventure, she’s not one to gush.

“She’s very modest, she doesn’t get excited,” her mother said.

The family suggested selling magnets with a photo of Chloe and Nova as a potential fundraiser, and the preteen preferred a picture of the dog only.

“I’m like, no, I don’t want to be included,” she said. “The only pictures I like are the really weird ones.”

But in terms of noticeable levels of excitement, maybe Nova—short for Supernova, a powerful stellar explosion—is electrified enough for both of them. That was clear this week when the 5-year-old collie with a white, brown and gray coat pattern known as blue merle was raring to go.

Chloe’s parents set up a practice course in the backyard—near pens of chickens and geese, peacocks, a llama and emu—and Nova wanted to run through the obstacles, over and over. She circled Chloe’s feet, darted toward the course, ran back to see if her handler was following her, all in a matter of seconds, then repeated as necessary until Chloe was ready.

The jumps and ramps, rings and raised walks are similar to what’s shown on international dog agility competitions. The difference is what order they’re placed in, and the course components are lined up in a different sequence at each event. They’re even changed from preliminary rounds to the finals to make the course more challenging, Stephanie Bales said.

Handlers get about 8 minutes to walk the course before they run it with their dogs and must decide in those moments where to position themselves so they’ll be one step ahead of their canine partners. They’ve got to be able to direct them to the next jump after the dogs climb up and down the ramp of a mini A-frame house or pivot from completing the wooden teeter-totter to jumping over a bar that’s 2 feet off the ground—no small feat for Nova, who’s 18 inches high.

The handler’s positioning is especially crucial with fast-thinking, high-energy border collies that react so quickly, it’s almost as if the dogs are reading their humans’ minds.

“They’re so fast, you flinch or you turn your shoulders just a little bit in the wrong direction, they’ll pull off a jump or knock a bar down” because they think that’s how they’re being directed, Stephanie Bales said. “You have to be aware of how you’re positioned, leaning, even if your feet are pointing a certain way, the dog’s gonna go that way, to that jump over there.”

Chloe has been going to agility shows since she was a baby and competing since she was 5, and her mother says she’s able to read the course better than most adults. When she was 8, Chloe showed off her skills in Los Angeles, where she was filmed as part of a segment of “Little Big Shots” with Steve Harvey.

Chloe and Nova have trained together for three years and “their relationship ensures that they understand, trust and are responsive to each other,” said Debby Dubay, manager of USA’s junior team.

“Chloe may be the youngest member, but her determination, along with her relationship with Nova, make them a wonderful and competitive team,” Dubay said.

Those selected must have earned several agility titles and the dogs must meet age, vaccination and health requirements. The juniors submit videos of themselves completing various courses, and the selection team zeroes in on those who will represent their country with “integrity, good sportsmanship, respect and love for their team and partner,” Dubay said.

Dubay noted in the bio she wrote about Chloe on the team’s Facebook page, how insightful she was for an 11-year-old when asked her advice.

“I would tell other juniors to never give up and enjoy the time you have with your dog,” Chloe responded.

During a recent interview, Chloe wore a black shirt that proclaimed: “If I can’t bring my dog, I’m not going.” She preferred to have her mother answer most questions about the process, then thought for a minute when pressed to say in her own words why she enjoys agility events.

“I find it’s much better than most other sports,” she said, “because I can actually do a sport with my dog.”

Chloe Bales of Spotsylvania County and the 22 other members of the AKC’s USA Junior World Agility Team are raising money for their trip to Finland next month, when they’ll represent their country against teams from across the world. Donations can be made for specific members at PAYPAL.me/AKCEOJ18.

The team’s Facebook page provides profiles of the team and tracks their progress.

Chloe Bales, 12, guides Nova through an agility course at her family’s Spotsylvania County home on Wednesday.

Some dogs are rewarded with food; Nova prefers to tug on a toy with her handler, 12-year-old Chloe Bales. Here, they play in the family’s backyard.

Chloe Bales, 12, does agility training with her dog Nova at her family's Spotsylvania County home on Wednesday, June 15, 2022. Bales has been selected to be on the American Kennel Club's 2022 Junior Agility Team and will travel to Finland next month to compete in an international agility event.

Shown here at a competition when she was 5, Chloe has been around border collies her whole life.

VIEW: To watch Chloe Bales train with Nova, point your smartphone camera at the QR code, then tap the link.