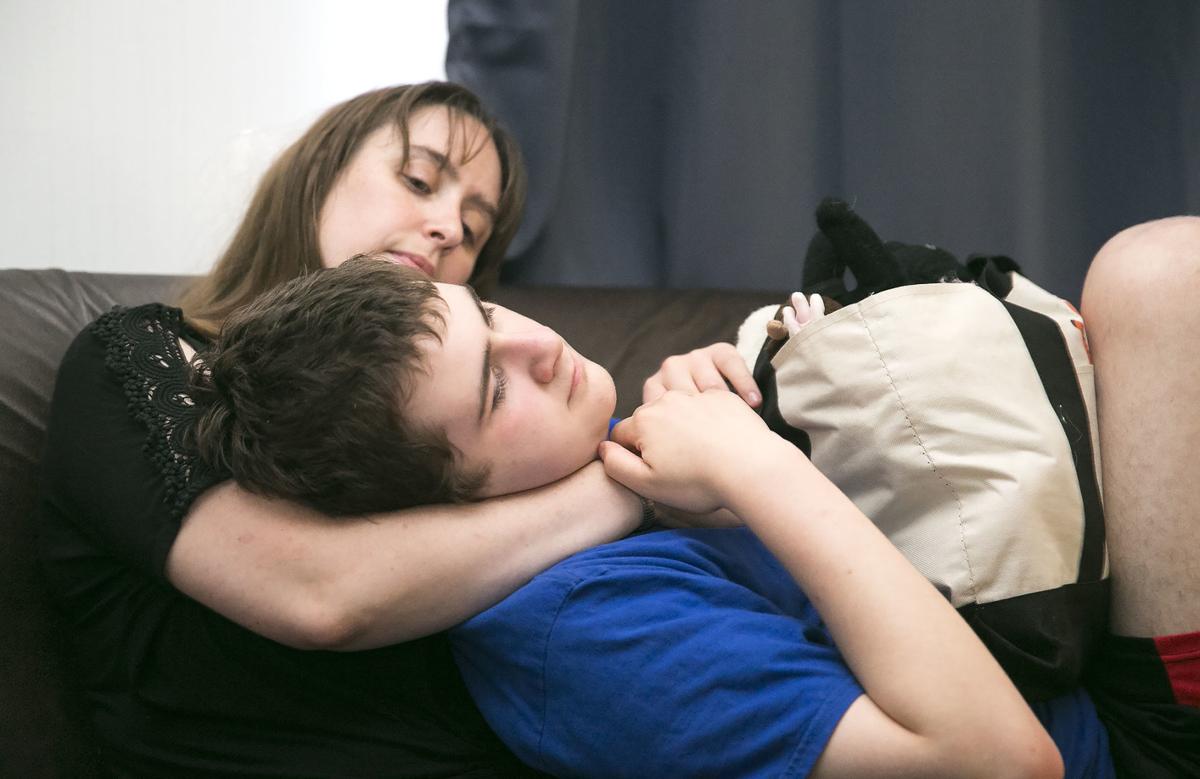 Jessica Porter and 15-year-old son Sam watch a movie at their Spotsylvania home. She’s cared for him since he was 7. 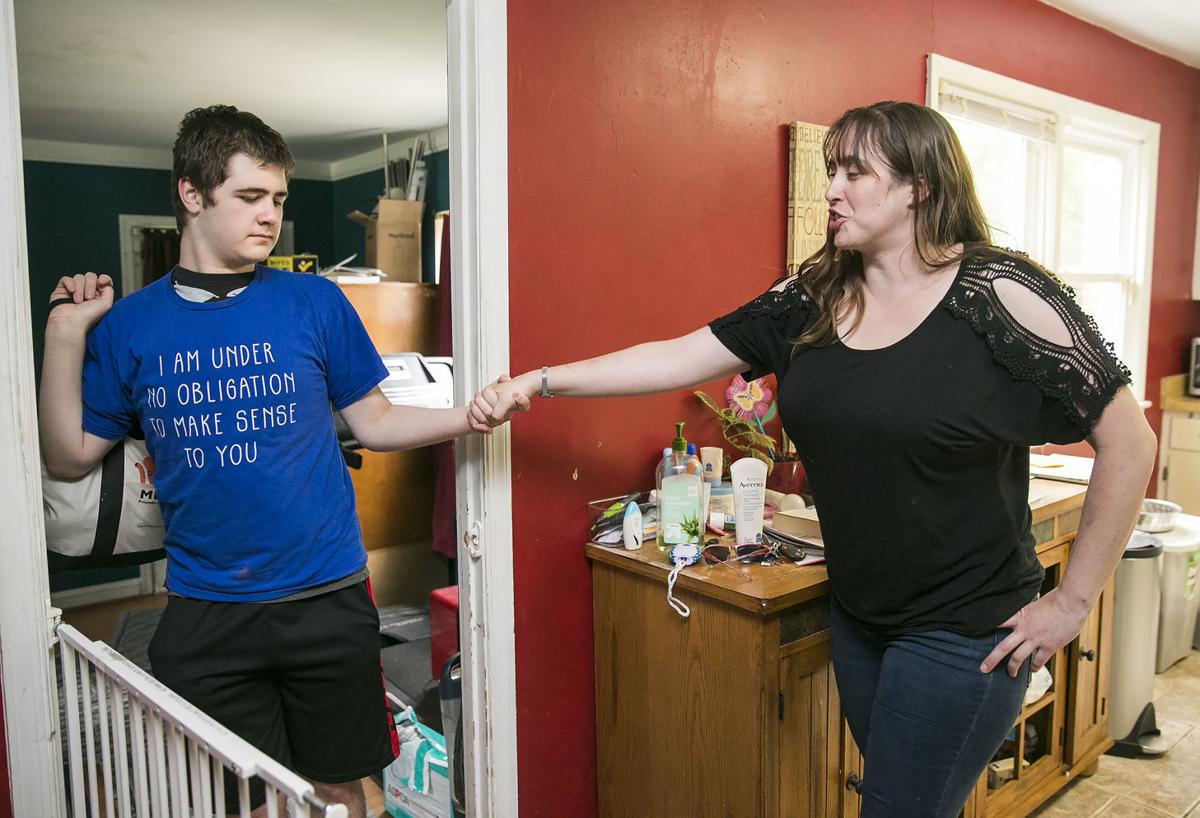 Sam Porter, 15, tries to lead mom Jessica to an outer door of their Spotsylvania home so they can get Chipotle for dinner. She says Sam has made great strides in their eight years together. 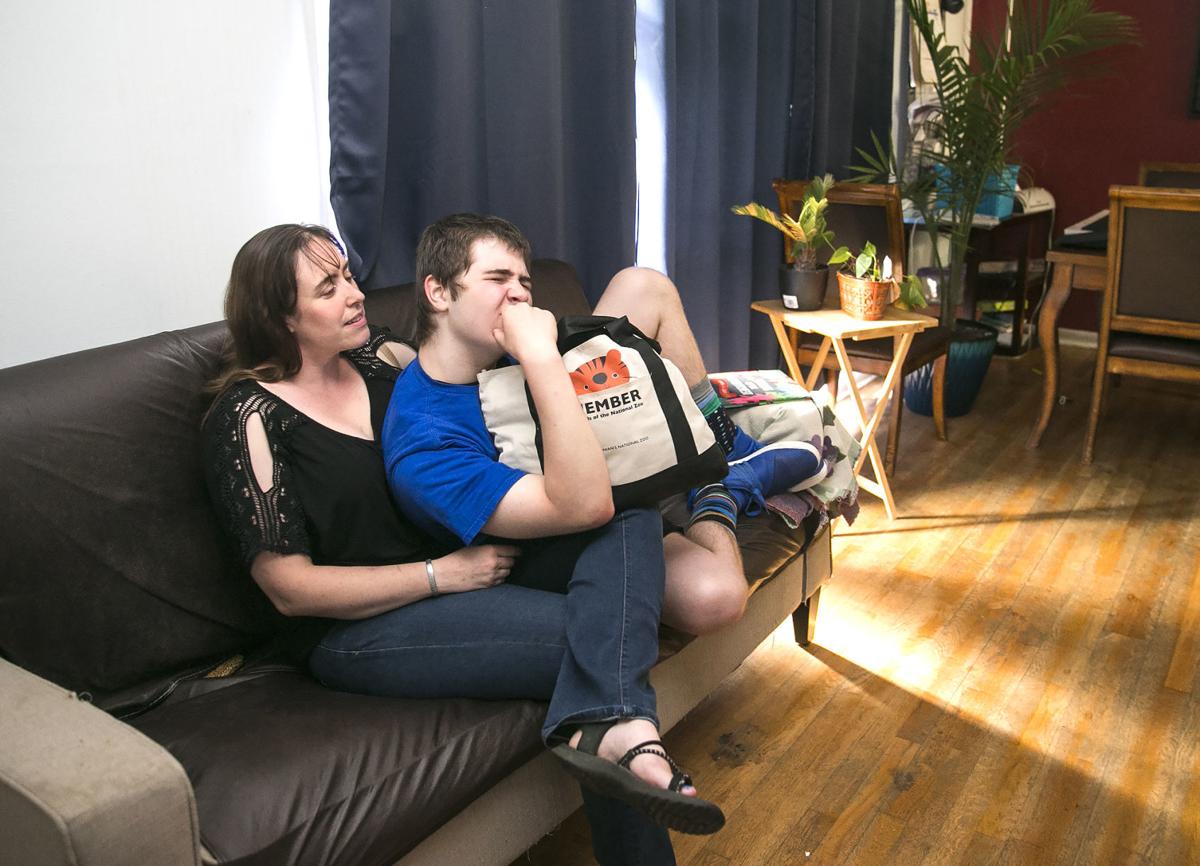 Jessica Porter became a foster mother to Sam shortly before his eighth birthday and adopted him four years ago.

Jessica Porter and 15-year-old son Sam watch a movie at their Spotsylvania home. She’s cared for him since he was 7.

Sam Porter, 15, tries to lead mom Jessica to an outer door of their Spotsylvania home so they can get Chipotle for dinner. She says Sam has made great strides in their eight years together.

Jessica Porter became a foster mother to Sam shortly before his eighth birthday and adopted him four years ago.

After Jessica Porter finished her foster care certification through the Spotsylvania County Department of Social Services, she thought, “They’re never going to call me.”

“There were stay-at-home moms in the class with me,” Porter said. “There’s no way they’re going to call me, a single woman who works full-time.”

But only about four months after she completed the licensing requirements, Porter got a call from Spotsylvania DSS.

“I had capped [the age of foster kids she would accept] at 8, and the first thing they said was, ‘We have a boy here and it’s two weeks before his 8th birthday,’ “ Porter said.

Then the social worker went on to tell her more things about Sam—he was autistic, nonverbal and not potty-trained.

“They were very sweet about it. They said they would call a few other families. But I knew in the back of my mind that was probably a lie. They hadn’t been able to place him with anyone,” Porter recalled. “So I just said yes.”

Though she worked as a preschool teacher for children with autism, she hadn’t intended to foster children with special needs, but, “it was one of those things where I couldn’t really think of a good reason to say ‘no,’ ” Porter said.

She drove to the department and a social worker brought her to the room where Sam was.

“Here was this 8-year-old boy who had long shaggy hair sitting in a preschool play sink,” Porter remembered. “I sat down on the floor next to him and he jumped on top of me and then I took him home.”

She didn’t know it then, but her home would become Sam’s forever home. She finalized her adoption of him four years ago—and she has provided long-term foster care to two other children with autism and one without.

“I had not planned on focusing on kids with special needs at all,” Porter, now 35, said. “Sam started that trend.”

A January 2018 study published in the Journal of Autism and Developmental Disorders found that children with autism are 2.4 times more likely to enter foster care than neurotypical children. One of the study’s authors, David Mandell, director of the University of Pennsylvania’s Center for Mental Health Policy and Services Research, wrote that the researchers see three reasons for this.

“First, raising a child with autism is stressful for families, as the condition is unusually difficult to manage effectively,” Mandell wrote in a January 2018 article in Spectrum, an online source for news and opinion on autism research. “Some parents may simply not have the skills and resources to do so. This may result in neglect or abuse—and placement in foster care.”

Mandell also suggests that parents may voluntarily place their autistic children in foster care because they can’t handle their behavioral problems and that they might relinquish custody so their children can obtain Medicaid-funded or residential care the parents can’t afford.

Finding foster homes for children with autism is a challenge. Michael Muse, director of Stafford’s Department of Social Services, said only one of the 54 children in the county’s foster care program exhibits behaviors associated with autism, but has not been officially diagnosed. He cited a previous case involving a child with autism, who was “nonverbal, very challenging to manage and required constant supervision.”

He said it was difficult for the agency to find placement for this child—though the child was eventually adopted by a foster parent.

Porter’s second foster placement had been pulled from his biological home and his residential school.

“The social worker called me and said, ‘We’re driving with him in the van and we literally have no idea where to put him.’ Can you just keep him for the night?’ ” Porter remembered. “Again, there wasn’t a good reason to say ‘no.’ I knew I would do everything I could to get him to a better place.”

That boy ended up living with Porter for two years. Social workers ultimately found a pre-adoptive placement for him and Porter thinks he was adopted by that family.

“He did really well with me. He had a chance [of being adopted], whereas when he was initially dropped off at my doorstep, he really wouldn’t have,” Porter said.

Porter fostered a third nonverbal child with autism and was successful in seeing him reunited with his birth family after trying to help them connect with resources and support to help them.

“[He] was loved very much and his family had worked hard to learn more about the best ways to care for him and themselves at the same time so that they could be a family again,” she said. “It was rewarding to see it work. I know they are a stronger family for having gone through the foster care system.”

Porter said the first two years with Sam were “pretty rough.” He didn’t sleep, was aggressive towards her, had self-injurious behaviors and was found to have severe allergies to some of his favorite foods.

She described one occasion when she took Sam to the Baltimore Aquarium because he loved sharks and ocean animals.

“I thought, ‘He’ll love it’ but we walked in and he lost his mind,” Porter said.

Sam started screaming and hitting her and refused to move. Eventually she got him into the cafeteria area, where she crouched on the floor and tried to hold him as he scratched and bit her and himself.

“I was bawling and he was bawling,” Porter remembered. “I thought, ‘Who can do this?’ ”

At that moment, a man came across the room, bringing napkins to help her clean up. That simple gesture of support gave her confidence.

“I thought, ‘I can do this. There are people to help. This is just a moment.’ ” Porter said. “He calmed down and he went through the aquarium and we had fun.”

“Just knowing there are those few people to help is enough,” she added.

Porter tries to be that voice of support to other foster parents, attempting to dispel misconceptions about foster care and autism.

“People think [autistic children’s] needs are so vastly different from any other kid,” she said. “But when I think about it, it’s maybe a more intense level, but they’re all the same needs.”

In addition to safety, shelter, food and love, Porter said kids in foster care who have experienced trauma and kids with autism both need consistency.

“Once they all knew that they were safe and that things were consistent, they were like, ‘OK. I can adjust to this,’ ” Porter said.

Sam is now almost 16 and is verbal.

“People who know him now don’t believe the stories I tell about him then. He’s a completely different kiddo,” Porter said.

In the end, kids with autism are “just kids,” she said.

“Sometimes they do just need that one safe, supportive person,” she said. “Even if it was only temporary, they have to have that memory or that experience of that one person. You never know what the ripple effect will be.”