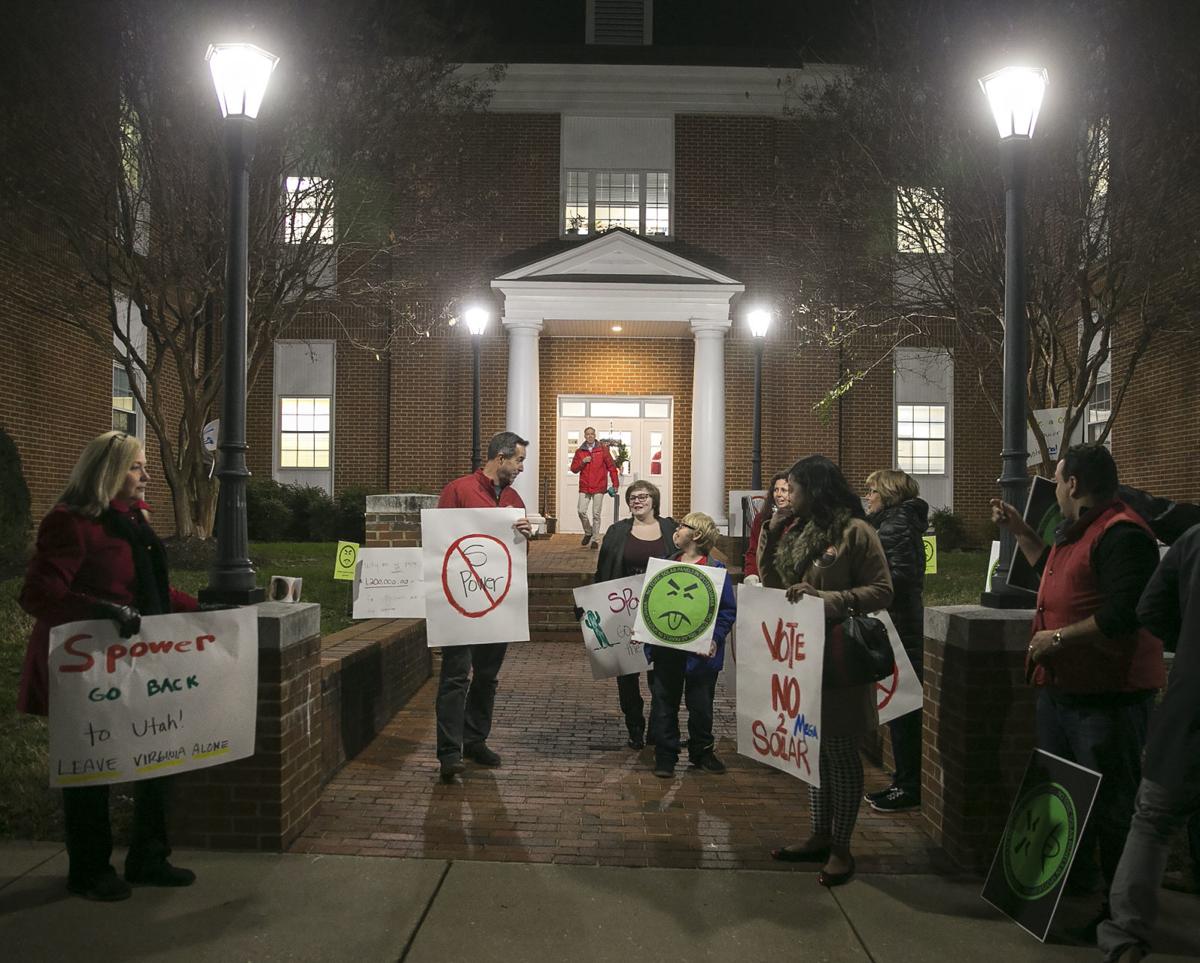 A group opposed to a solar power facility being considered in Spotsylvania County gathers before a public hearing on the issue in front of the Richard Holbert Building on Wednesday. 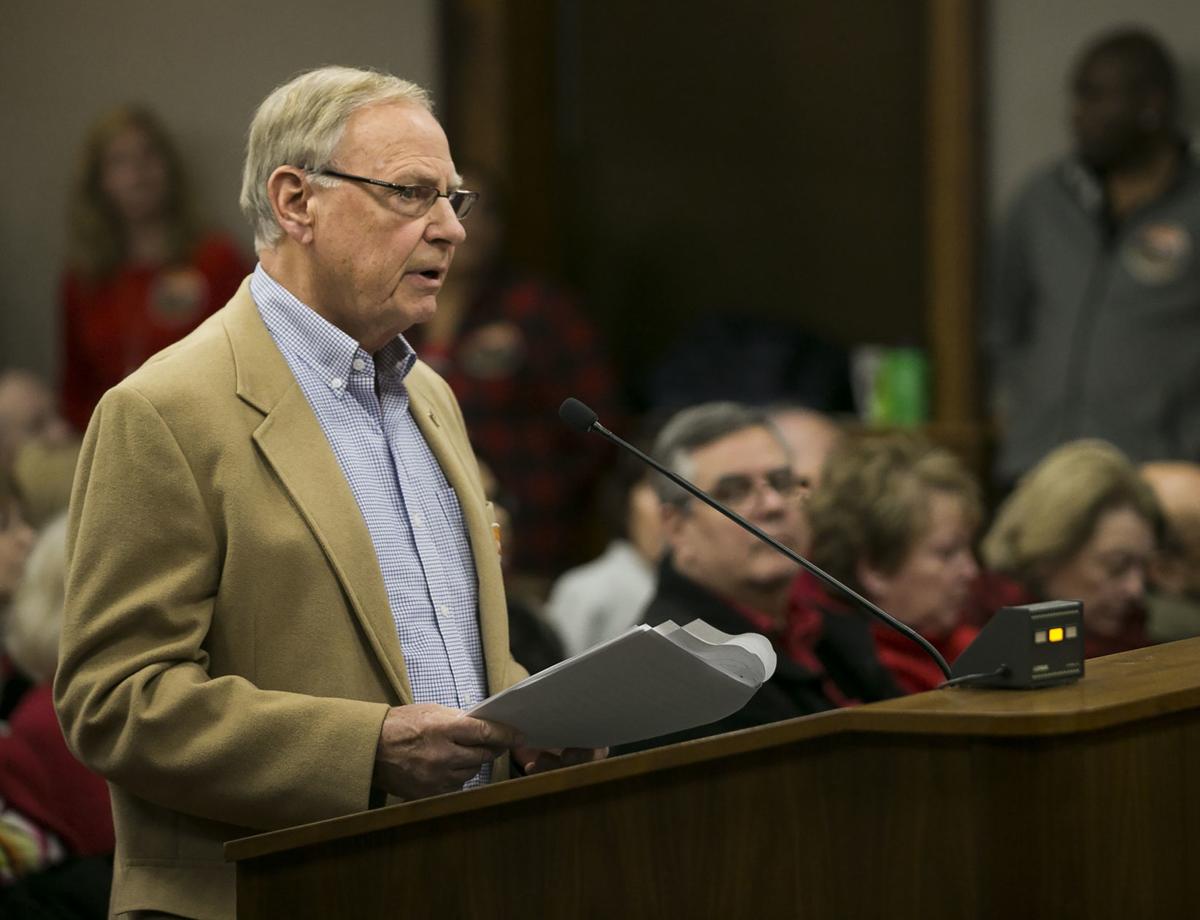 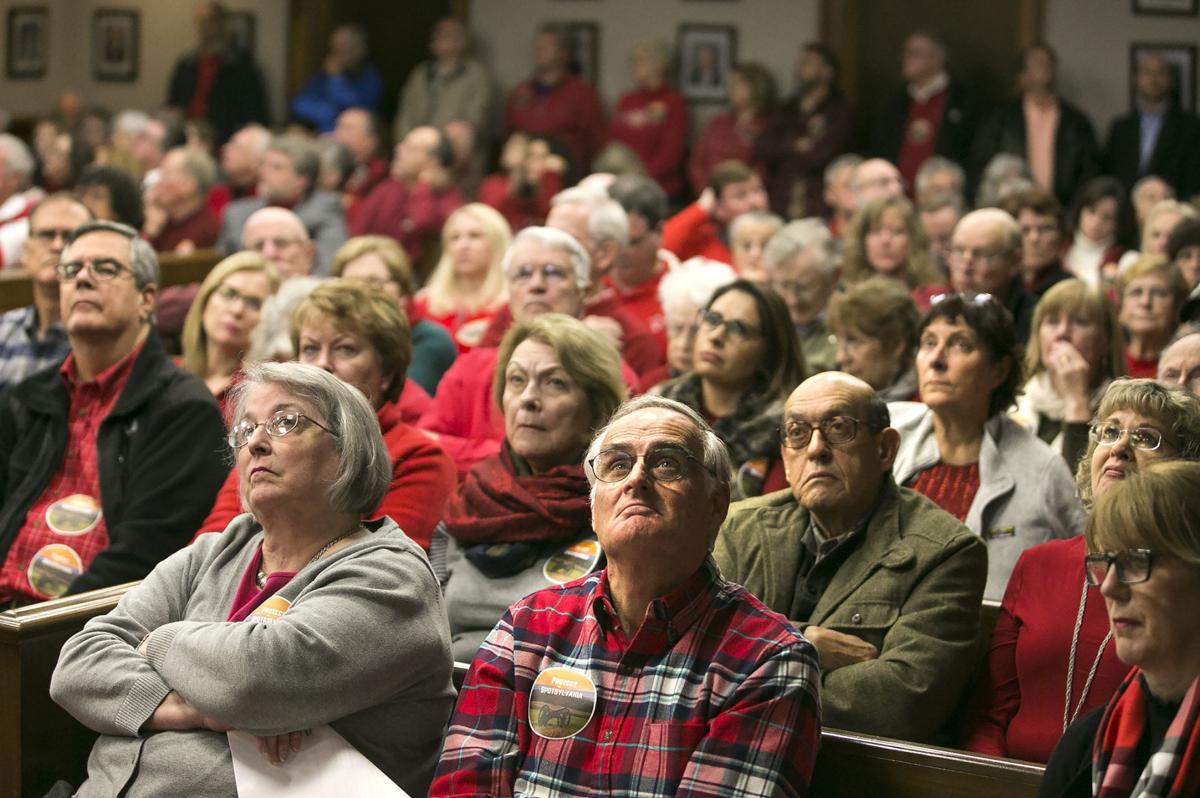 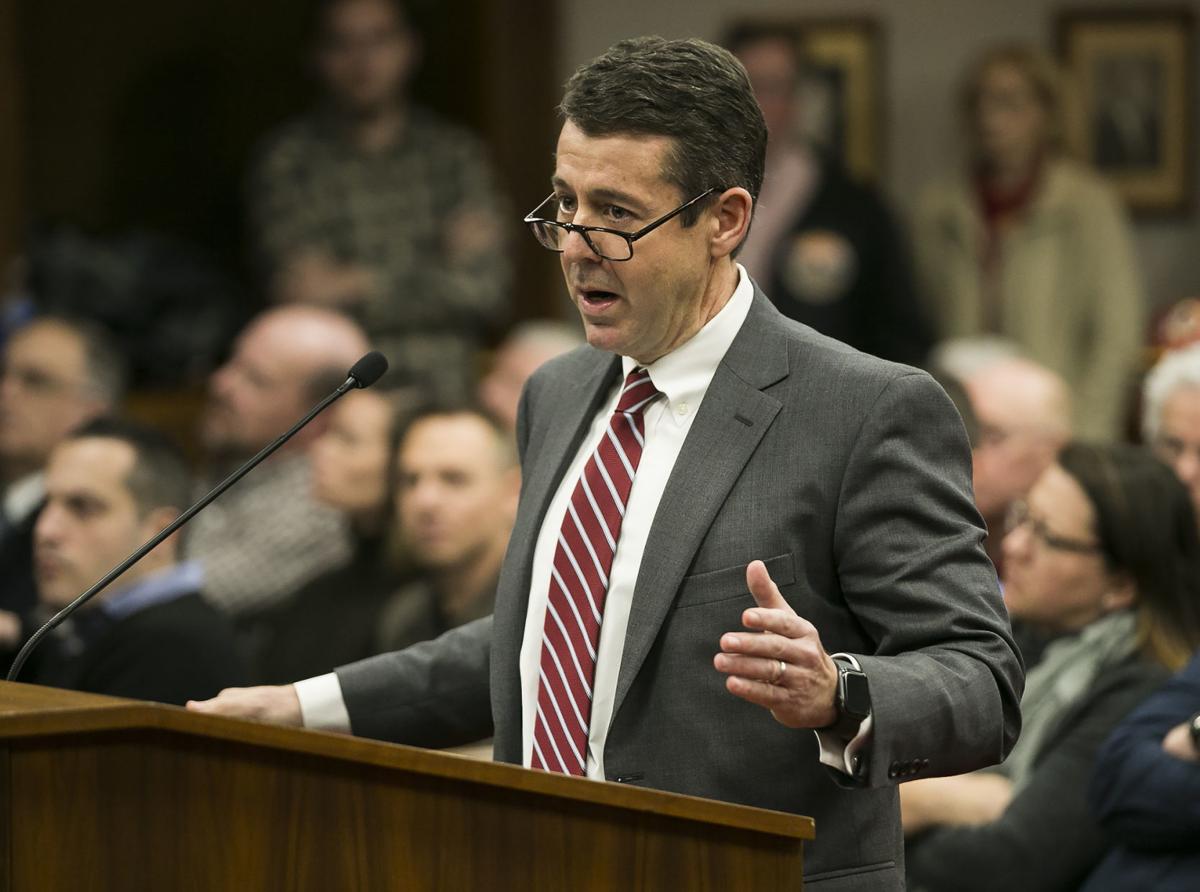 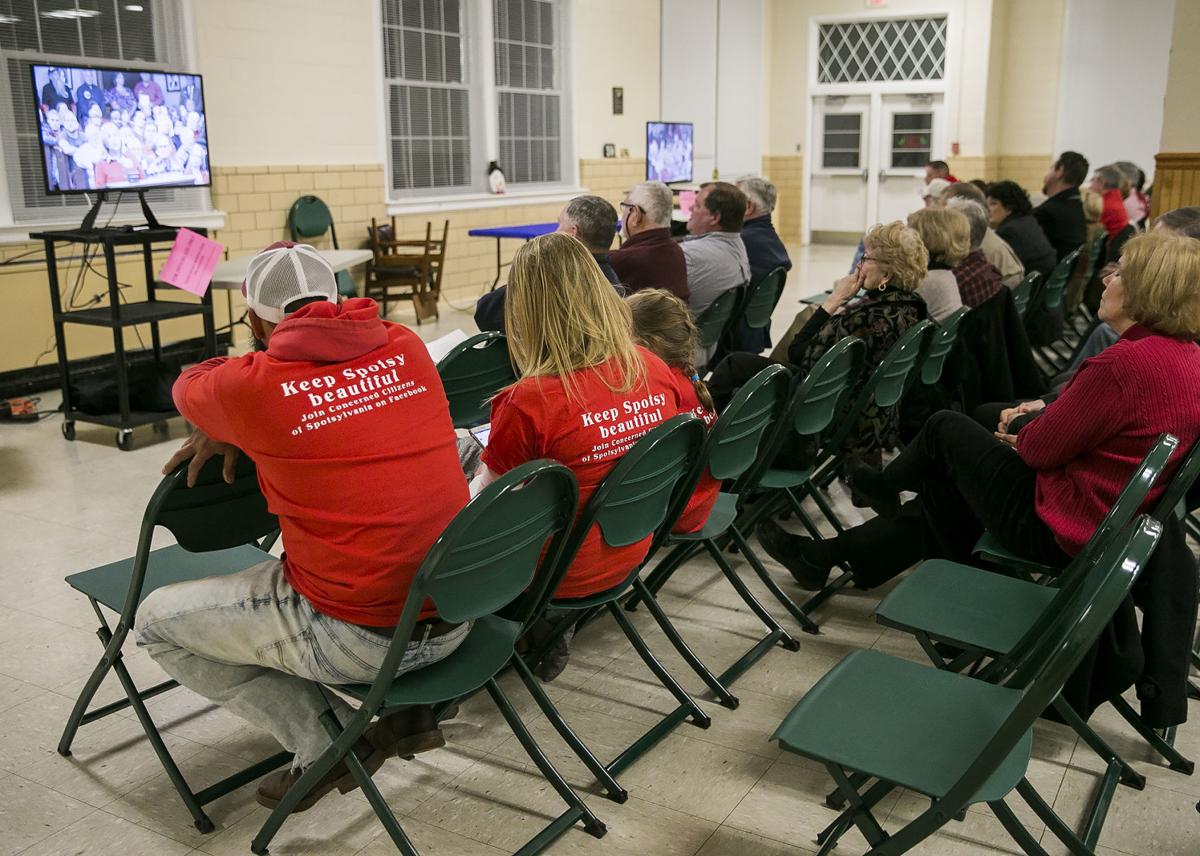 An overflow crowd watches a public hearing on a proposed solar power facility in Spotsylvania at the county’s Marshall Center on Wednesday, Dec. 5, 2018.

People showed up early—some to find a seat and some to protest—for Wednesday night’s public hearing on a proposed solar plant in western Spotsylvania County.

The turnout of about 300 people for the public hearing at the Holbert Building was the most for a Planning Commission meeting in at least the past 15 years, said county spokeswoman Michelle McGinnis.

The room couldn’t hold all the attendees. Some had to watch the hearing on televisions in the lobby and others from the nearby Marshall Center, where the remaining meetings on the proposal are scheduled to be held.

The Planning Commission listened to nearly five hours of residents’ comments and testimony from county staff and the applicant regarding the first of three special-use permits for the proposal.

The commission made no comments on the proposal and did not vote on a recommendation. Instead, it voted to hold a follow-up hearing Jan. 2 to give the applicant a chance to address issues raised by county staff. A public hearing on the other two special-use permits will be held at 7 p.m. Dec. 19.

The county Board of Supervisors has the final say on the project and also will hold public hearings on the proposal.

Utah-based Sustainable Power Group Inc., also known as sPower, submitted a proposal in January to build three solar-panel sites on more than 6,300 acres of forested land that has been partially cleared of timber.

The 500-megawatt facility would include 1.8 million solar panels erected on the three sections of the property, which once was farmed but in recent years has been used for timber harvesting. The solar panels would cover just less than half of the property. The company has promised to conserve more than 2,000 acres.

The facility is the largest such proposal in the country, which is experiencing a solar-energy boom that has moved from the West Coast to the east. In order for the proposal to become reality, the county must approve a special-use permit to change the zoning from agricultural to industrial.

Critics, mostly residents who border the site, say the facility’s scale and impact is out of character with the rural area, as well as the county’s comprehensive plan. And they say there are too many negative impacts—or at least unknown risks—to approve the permit.

The company, a major player in the renewable energy industry with more than 150 projects in the U.S., says it wants to build a quality project that will prove beneficial to the county and its residents.

Charlie Payne, a local attorney representing sPower, told the commission the project is a “unique opportunity” for the county.

“This is the future,” he said.

Payne said sPower has been working with the county in addressing issues and concerns raised throughout the process. The company has made adjustments to such things as planned water use and grading of the soil to avoid erosion and sediment problems.

He said the project would generate economic benefits from tax revenue and jobs. The company also has offered to invest in the county by, for instance, installing solar panels on schools and other county buildings, which he said could save Spotsylvania millions in energy costs.

Payne also pointed out that the project is heavily regulated by government agencies.

“This is a safe, reliable project,” he said.

Payne gave the commissioners a packet with updated information and letters of support from local residents and businesses. The packet also contained a letter from the city manager of Lancaster, Calif., where sPower has built numerous solar projects.

Mark Bozigian wrote that sPower has built more than 20 projects in Lancaster, accounting for more than 550 megawatts, with more on the way. He touted the economic benefit of the projects and noted the lack of negative impact to what he described as a rural area.

“It is important to know that the disturbance, risk, and construction impact has been little to none for our local community,” Bozigian wrote.

Spotsylvania residents who live near the site made the most of the public comment time on Wednesday.

A majority of the speakers said they did not want the project. If it is approved, they implored the commission to at least gather more information and make sure requirements protect the county and residents.

Proponents of the project, outnumbered by about 3–1, touted green energy and the economic benefit to the county.

Critics repeated many issues they have raised in the months since the proposal was submitted in January.

Their key issues include toxic materials inside the solar panels; water usage; buffers from the facilities; property value decreases; and the risk of what happens if the project fails and the site is abandoned.

Sean Fogarty—one of numerous Fawn Lake residents who formed a group to look into the project, which borders the gated neighborhood—said the proposal and staff reports both are incomplete and that much work remained to be done.

Two Realtors, one of whom lives in Fawn Lake, told the commission that the project would lower property values around the site and that some prospective homebuyers already are shying away from the neighborhood.

Supporters of the project included the family that owns the property. They said their family farmed the land for many years and now it’s time to move on. They like the solar project and said they should be able to do what they wish with their property.

Sarah Meadows was one family member to speak, and said opponents are “elitists” who simply don’t want the project near them. Brad Meadows said the family just wants to hand off “our property correctly.”

Victor Meadows asked the commissioners: “Whatever happened to property rights?”

David Wilson, another resident whose property borders the site, spoke in favor of the project. He said the solar facility would be an improvement over the timbering work he has endured for years. Some critics said Wilson and other supporters have financial ties to the company and project.

County staff laid out the project details and major facets of the proposal and potential impacts, good and bad, to the county.

Planning Department Director Wanda Parrish said the facility could be one of the county’ top 10 tax revenue producers. Critics have said sPower should pay much more than what current figures show.

Patrick White, who works in the county planning department, summarized the project and issues with it. He eventually told the commission that staff could not recommend the project because it does not fit in with the county’s comprehensive plan or all of the standards required by special-use permits.

Staff has produced recommendations to address the key issues: traffic mitigation during construction; a more detailed buffer and landscaping plan; soil testing and remediation of any soil impacted by toxic materials, such as cadmium telluride, inside the panels; and the decommissioning plan, which staff said needs more details.

The decommissioning plan is a critical focus of critics, who suggest the county could be left with a toxic site and financial loss if the project fails or when it closes.

County resident Stephen Kerr said there is no guarantee the project would work and warned the commission to look into the project hard.

“If this thing’s a loser,” he said, “you’re gonna be living with it for a long time.”

King George has had multiple students at the Naval Academy before, but never four at the same time, with one representing each year's class.

Guinness World Records has to certify the results, in which Navy corpsman Ben Katzman broke all kinds of personal records.

A group opposed to a solar power facility being considered in Spotsylvania County gathers before a public hearing on the issue in front of the Richard Holbert Building on Wednesday.

An overflow crowd watches a public hearing on a proposed solar power facility in Spotsylvania at the county’s Marshall Center on Wednesday, Dec. 5, 2018.