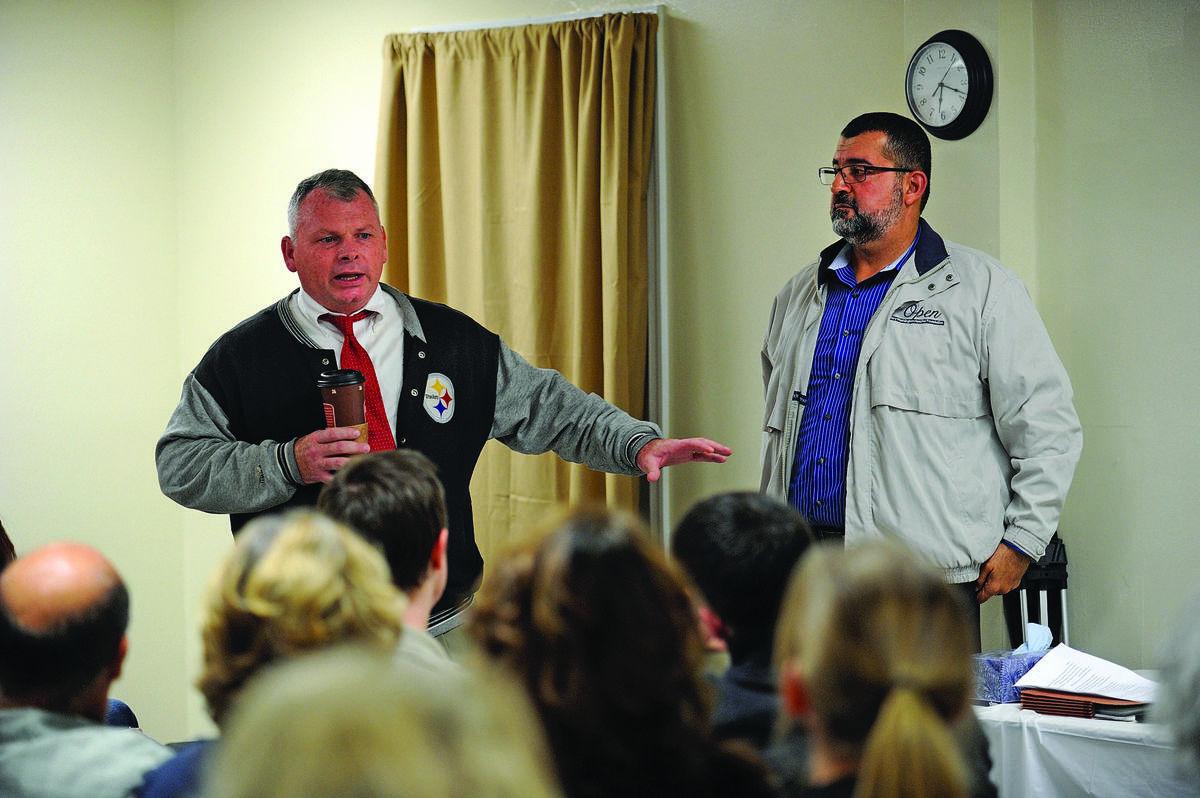 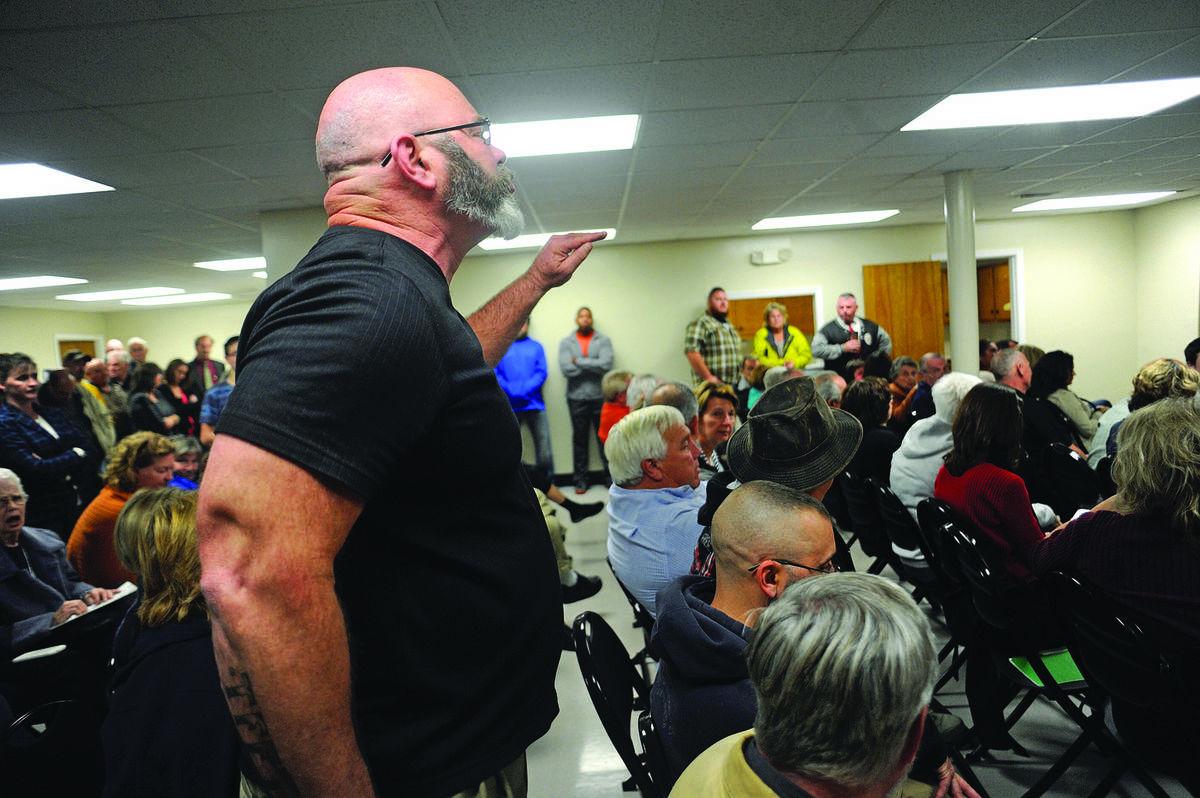 A member of the audience raises concerns about plans to builda mosque at the corner of Andora Drive and Old Plank Road. 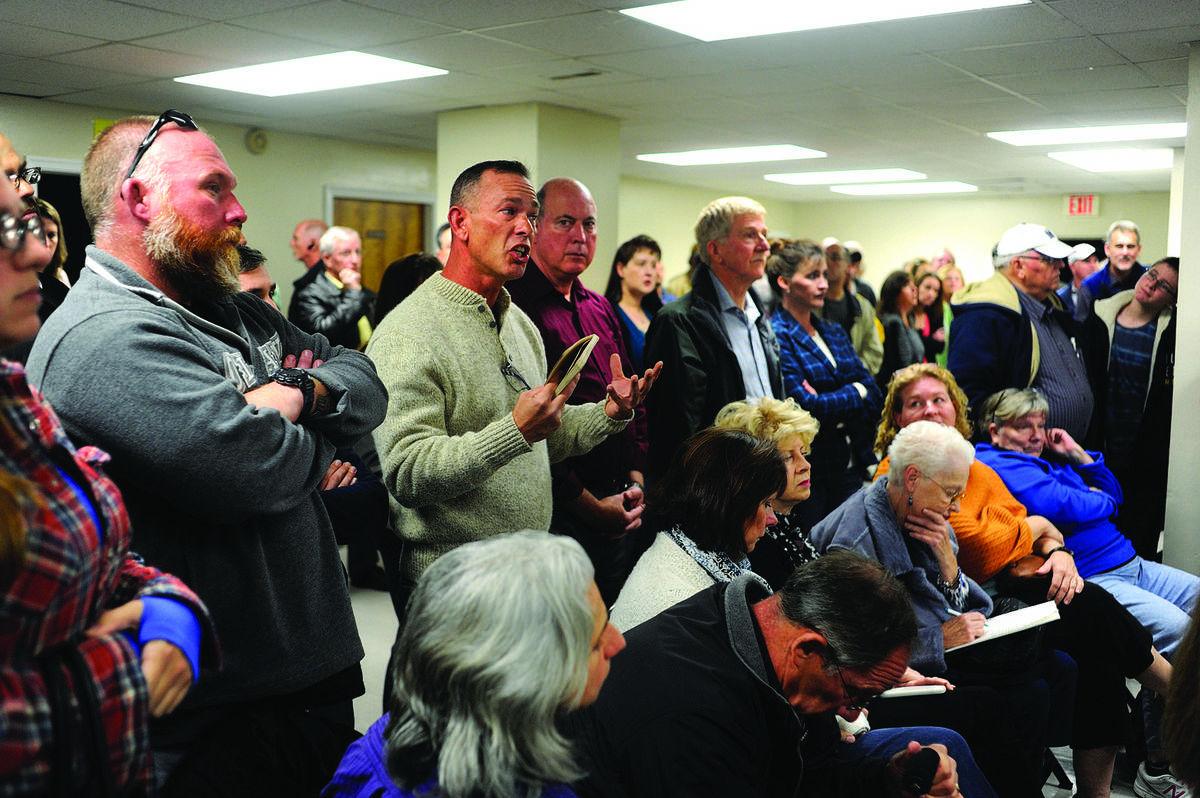 A packed house turned out to hear a presentation and voice concerns about a proposal to build a new mosque in Spotsylvania. Any future hearings may be held at a larger site.

A Muslim congregation will continue pursuing plans for a new mosque in Spotsylvania County despite strong opposition — and some anti-Muslim statements — at a meeting this week, a trustee of the Islamic Center of Fredericksburg said.

Samer Shalaby said the timing of Tuesday’s forum, four days after the terrorist attacks in Paris, did not help their cause. But he says his religion does not condone murder, and that he and other Muslims are just as upset as everyone else about what happened in France.

“You keep hoping that, as we evolve in this country, that we will not completely put a blanket designation on any group . . . especially for religion,” Shalaby said.

He said he hosted Tuesday’s meeting to present the Islamic Center’s plan to seek a special-use permit to build an 8,000-square-foot mosque at the corner of Old Plank Road and Andora Drive. It would replace the existing mosque on Harrison Road.

Shalaby said he thought about canceling the meeting in light of the Paris attacks, but decided to go ahead with it because people had already made time in their schedules to attend. The mosque sent a letter Oct. 20 notifying nearby landowners of the meeting at Chancellor Community Center.

A sheriff’s deputy halted the forum after about an hour after tempers in the packed room flared and some attendees made anti-Muslim statements.

Shalaby said he would be open to another meeting, but not if it is to bash Muslims.

“That’s not going to accomplish anything,” he said.

He said he wants any future meetings to have more security and a moderator.

Islamic Center trustees have not submitted a formal proposal for the project, which will require separate public hearings in front of the Planning Commission and Board of Supervisors. Shalaby said he’s not sure when he will send an application to the county.

He has been through the process before as the president of Development Consulting Services. He said he was a consultant for a Baptist church that requested a special-use permit to build a 6,400-square-foot facility on West Catharpin Road.

Supervisors approved that proposal in September with little discussion after a nearby homeowner expressed concerns about traffic.

Shalaby acknowledged that some people at Tuesday’s meeting had legitimate traffic worries that he will try to address. But their voices often were drowned out by what he called “belligerent attacking.”

He noted that Islamic Center members have monthly potlucks and support the homeless shelter like many other places of worship. On Sunday, the mosque is holding a “farm fun day” featuring horse rides, a petting zoo and pizza.

The mosque has been at its current location for 15 years, and nothing bad has happened there, Shalaby said. A lot of the meeting’s attendees probably didn’t even know the mosque existed, he added.

“We’ve been law-abiding citizens,” he said.

The Rev. Don Rooney, senior pastor at St. Mary Catholic Church in Fredericksburg, attended the meeting with the hope of “speaking a little bit toward peace,” but said he didn’t think the crowd was ready to hear that message.

“It’s really wrong, I think, to paint with such a broad brush,” Rooney said of the anti-Muslim comments. “Their emotions were riding very high.”

He noted that not everyone came to the meeting to express distaste for Islam. Some attendees respectfully raised concerns about traffic, he said, and signaled their disagreement with others who attacked the religion.

The mosque would include 200 parking spaces next to the Ashleigh Park subdivision.

“These are people’s homes,” Rooney said. “Traffic is such a nightmare.”

Similar scenes have played out across the country, with localities facing lawsuits for blocking mosque projects. Last year, for instance, a Muslim congregation filed a lawsuit against Bensalem Township, Pa., claiming it violated the congregation’s constitutional rights by denying a proposed mosque.

Asked whether he thinks it will come to that in Spotsylvania, Shalaby replied: “I sure hope it will not. We’ve been here in a peaceful fashion for many years. I hope that calm minds will prevail.”

“We’ve been here in a peaceful fashion for many years. I hope that calm minds will prevail.” SAMER SHALABY, ISLAMIC CENTER

Where does Donald Trump stand now?

A member of the audience raises concerns about plans to builda mosque at the corner of Andora Drive and Old Plank Road.

A packed house turned out to hear a presentation and voice concerns about a proposal to build a new mosque in Spotsylvania. Any future hearings may be held at a larger site.