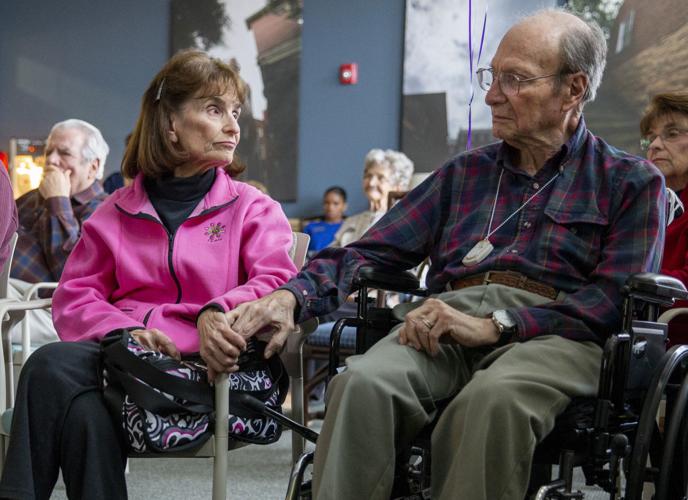 Bernard Cohen and his wife, Rae, watch a documentary about Richard and Mildred Loving. Cohen argued the landmark Loving v. Virginia case before the Supreme Court in 1967, which ended the ban on interracial marriage. 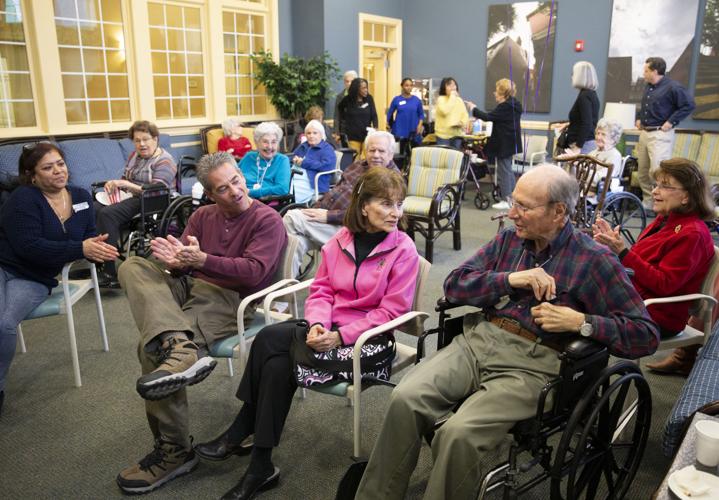 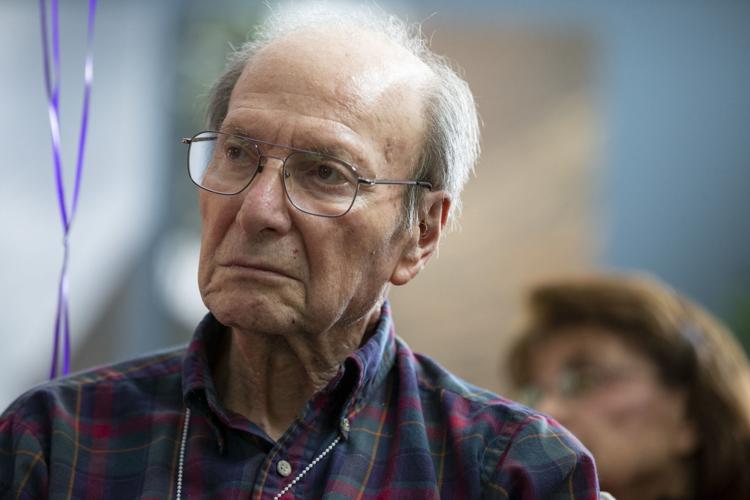 Cohen remembers the Lovings as a ‘nice and gentle couple’ who didn’t want to go to the Supreme Court. 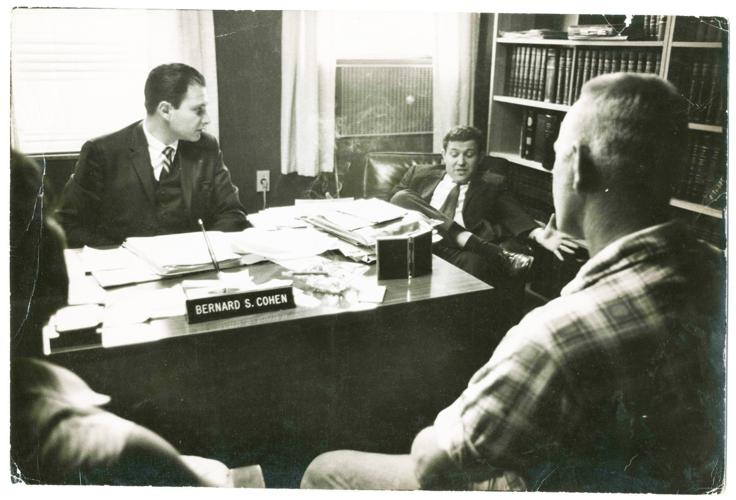 The Lovings confer with Cohen and fellow attorney Philip J. Hirschkop about their lawsuit in 1967.

Seated in a wheelchair decorated with purple balloons in the sunroom of Spring Arbor, an assisted living and memory care facility in Fredericksburg, Bernard Cohen watched the television.

On the screen he saw himself, more than 50 years ago, brimming with excitement, with shiny black hair and wearing a dark suit with a red carnation in the breast pocket.

In the 1967 footage from the 2011 HBO documentary, “The Loving Story,” Cohen reads aloud the letter from Mildred Loving that was forwarded to him by then-Attorney General Robert Kennedy.

“Five years ago, my husband and I were married here in the district. We then returned to Virginia to live,” Mildred wrote. “My husband is white, I am part negro and part Indian. At the time, we did not know there was a law in Virginia against mixed marriages. Therefore we were jailed and tried in a little town of Bowling Green.”

The couple were charged with violating Virginia code prohibiting interracial marriage and miscegenation—a felony offense. They were sentenced to one year in prison, which was suspended on the condition that they leave the state and not return for 25 years.

But the couple missed their family and friends, who all lived in the Caroline County community of Central Point, where they’d grown up, met and fell in love.

“We have three children and cannot afford an attorney,” Mildred wrote. “Please help us if you can. Hope to hear from you real soon. Yours truly, Mr. and Mrs. Richard Loving.”

In the documentary, Cohen looks up after reading these words and smiles.

“And it was that simple letter that led to this not-so-simple case,” he says.

In 1967, Cohen, just a few years out of Georgetown University’s law school, was a volunteer attorney for the Virginia ACLU. He and a fellow attorney, Philip Hirschkop, took the case, eventually appealing the Loving’s conviction all the way to the U.S. Supreme Court, which found that it violated both the due process and equal protection clauses of the 14th Amendment.

The unanimous decision of June 12, 1967, in Loving v. Virginia struck down laws against interracial marriage across the country.

“I always knew it would go to the Supreme Court,” Cohen said Thursday in his room at Spring Arbor. “That’s why I took it on.”

“When I told Richard [Loving] that, his jaw about dropped,” he continued.

Cohen is now 85 and beginning to suffer from the effects of Parkinson’s, which was diagnosed when he was 70, his wife, Rae Cohen, said.

In November, he moved into Spring Arbor. When Ana Robles, the facility’s director of activities, found out the background of the new resident, she was fascinated.

She had seen the 2016 film “Loving” and wanted to do something special for the man who won the case for the Lovings and made it possible for all interracial couples to marry.

“He is real shy,” Robles said. “I asked him if he wouldn’t mind me organizing a celebration for him. He said, ‘Not at all, but I want to be sitting in the middle, not in front.’ ”

Robles organized a screening of the documentary, “The Loving Story,” with popcorn and other refreshments, on Thursday. She invited Cohen’s neighbors at Spring Arbor, as well as his friends and family.

Later, she learned that Jan. 17 also happened to be Cohen’s 85th birthday.

The morning of the event, she said, Cohen’s nurses came to her and told her, “You have to go see Mr. Cohen. He won’t eat, he’s so excited.”

She took him balloons and reassured him.

“I told him, ‘The only thing you have to do today is enjoy your day,’ ” Robles said.

Cohen’s wife of 60 years, Rae, attended the celebration along with her twin sister, Rita Apter, and her children, Karen and Bennett Cohen.

Karen Cohen followed her father into a career as a lawyer, but she said his impact is bigger than that.

“It’s more the impact it’s had on us as a family, how proud we are of his legacy,” she said, with tears in her eyes. “My son is learning about civil rights in school and the Loving case came up. He was able to raise his hand and say, ‘My grandpa argued that.’ And my daughter had that same experience. For them to have that in their lives is so special.”

Cohen’s brother-in-law, Ronald Apter, said one of his “rewards” for winning the case in 1967 was having someone pour sugar in the gas tank of his car.

“Not many people know that,” he said.

After the Loving case, Cohen went on to serve in the Virginia House of Delegates from 1980 to 1996. He continued to argue for civil rights, introducing a bill in 1980 to decriminalize homosexuality. That bill failed, but the 2015 Supreme Court decision guaranteeing the right to marry to same-sex couples cited Loving v. Virginia.

In 1983, the General Assembly passed Cohen’s “Death with Dignity” bill, which allows terminally patients to choose to be disconnected from life support.

He described them as “a very nice and gentle couple.”

“They were very quiet, private people,” he said. “They didn’t want to go to the Supreme Court. Totally the opposite.”

The couple told him they didn’t want to come to listen to his arguments before the Supreme Court. He asked if there was anything they wanted him to convey to the justices, and Richard Loving said, “Mr. Cohen, tell the Court I love my wife, and it is just unfair that I can’t live with her in Virginia.”

Cohen included the message in his arguments.

The Cohens kept in touch with the Lovings for the rest of their lives. When Richard was killed by a drunken driver in 1975, in an accident that also left Mildred blind in one eye, they attended his funeral.

And when Mildred was dying in 2008, her former lawyer was on her mind.

“She asked for Bernie right before she passed,” Rae Cohen said.

After watching the documentary Thursday, Spring Arbor resident Ruth Roesler told a story about having dinner with Cohen soon after he moved in.

His career came up in conversation.

“He asked if I had heard of this case and I said, no, I’m not from this area. So he told the story,” Roesler said. “And I have appreciated him. I have a granddaughter who is married to a black man, and just to think of what they would have gone through ....”

She trailed off, shaking her head.

Bernard Cohen and his wife, Rae, watch a documentary about Richard and Mildred Loving. Cohen argued the landmark Loving v. Virginia case before the Supreme Court in 1967, which ended the ban on interracial marriage.

Cohen remembers the Lovings as a ‘nice and gentle couple’ who didn’t want to go to the Supreme Court.

The Lovings confer with Cohen and fellow attorney Philip J. Hirschkop about their lawsuit in 1967.