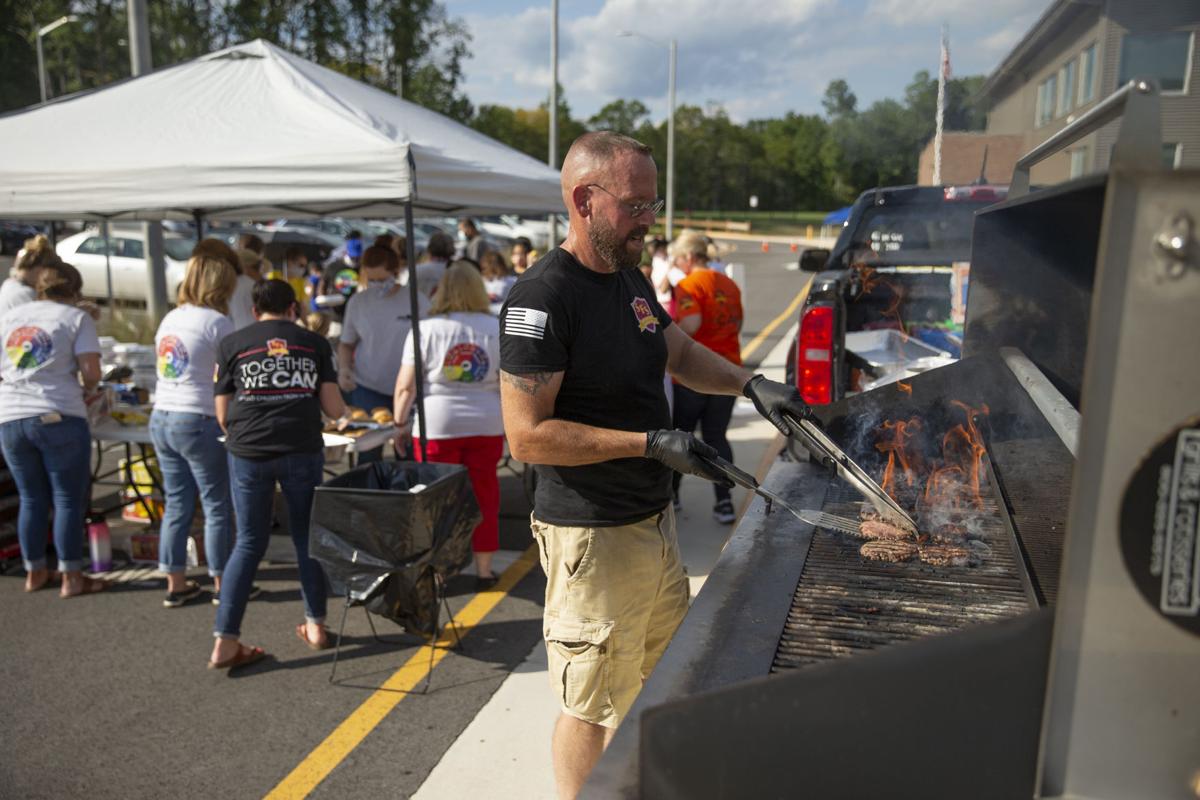 Tim White of Stafford Food Security Inc. grills hamburgers to give away during registration night at Anne E. Moncure Elementary School in Stafford on Aug. 18. 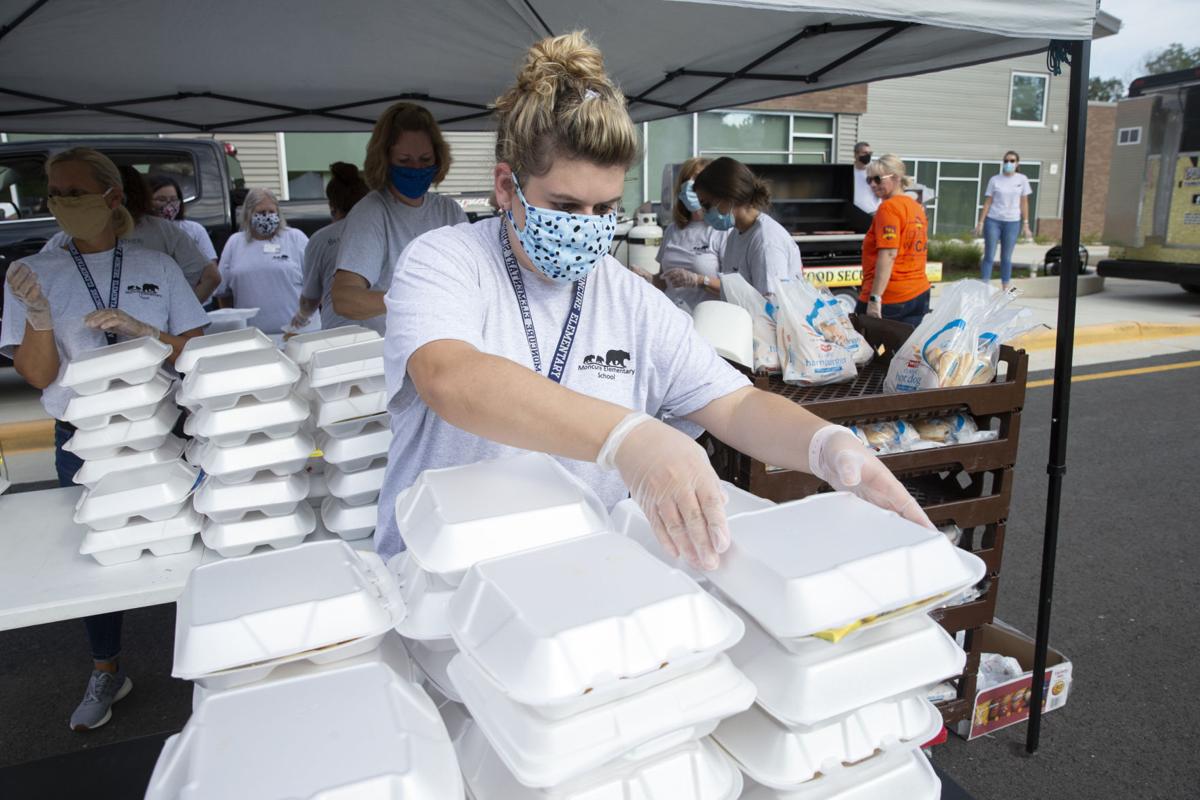 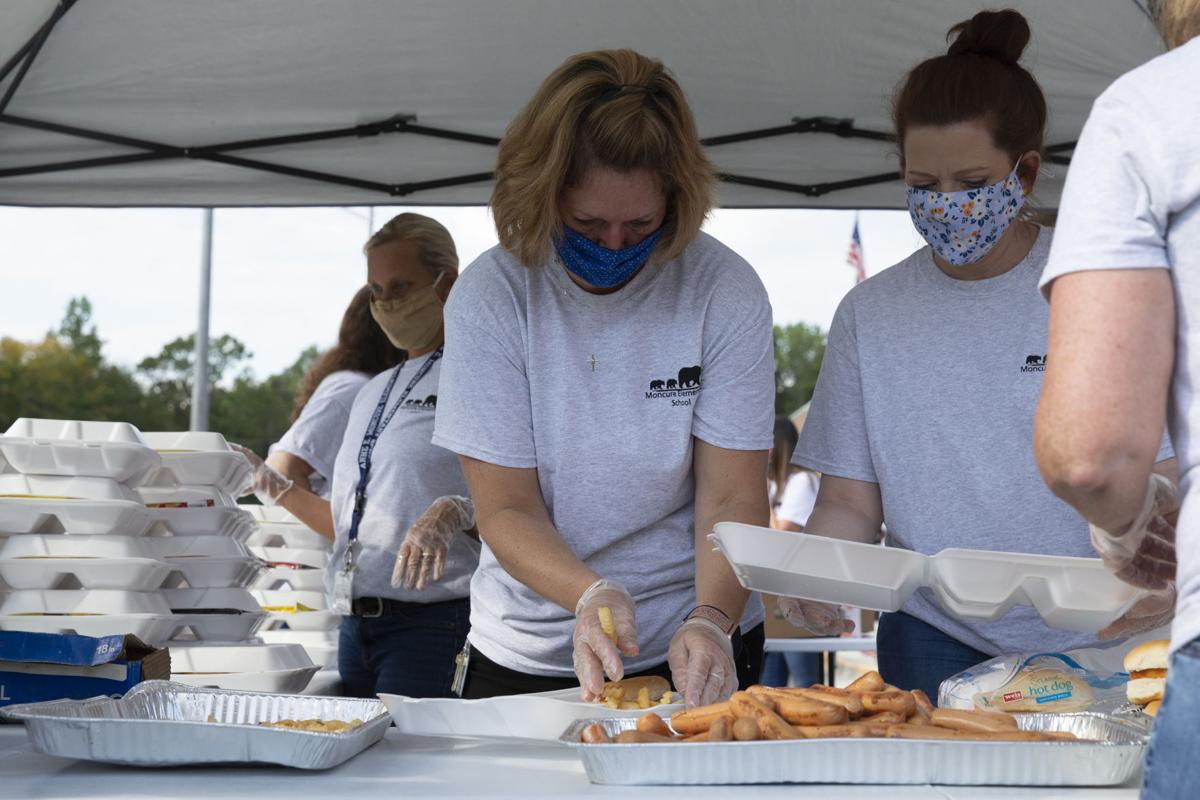 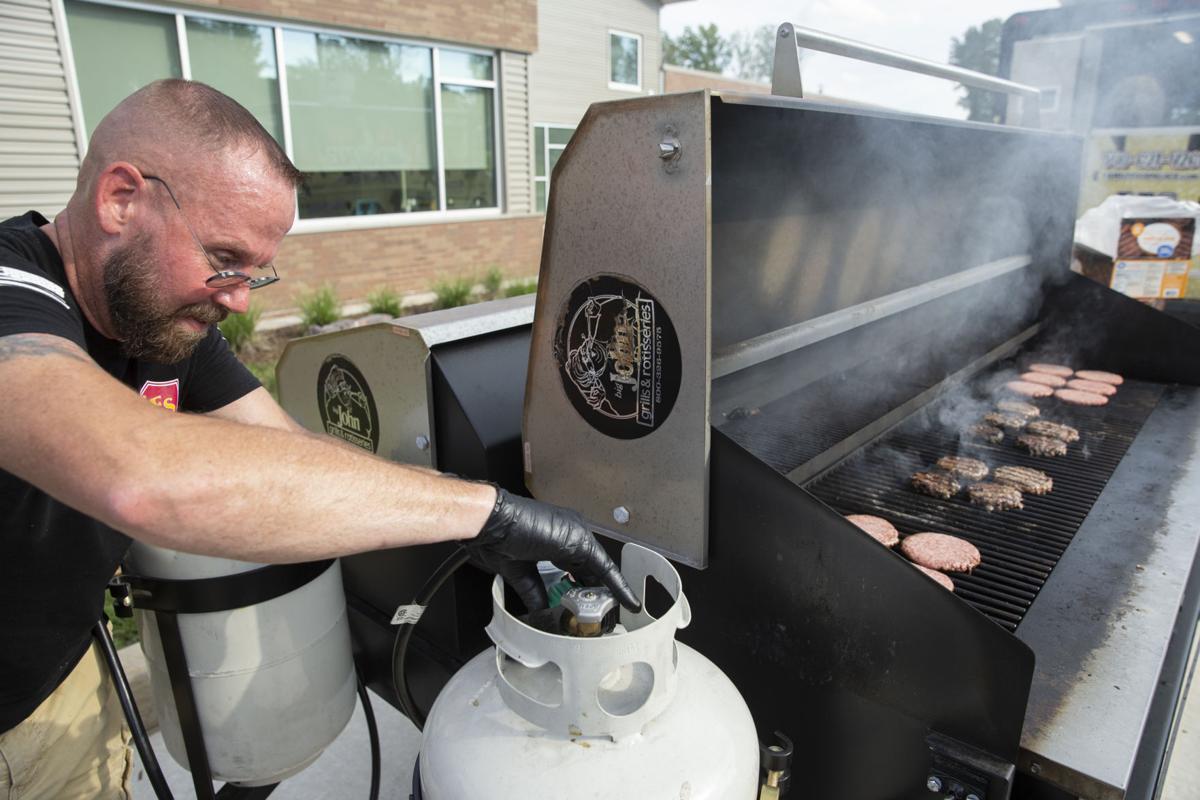 Tim White of Stafford Food Security switches a propane tank on his grill.

Tim White said he does it to help bring the community together.

“There are neighbors who need help and we have enough resources in this community that if we share them, we can take care of each other,” White said.

White runs Stafford Food Security on Deacon Road in southern Stafford County. In three years, the nonprofit organization has grown to feed more than 15,000 schoolchildren and their families spanning 66 schools in Stafford, Spotsylvania and King George counties, as well as Fredericksburg.

“I grew up hungry as a kid,” said White, a Marine Corps veteran, who enlisted immediately following Sept. 11, 2001, and remained on active duty until 2013, after tours in Iraq and Afghanistan. “I definitely know what it’s like not being able to eat.”

In March 2017, White started a small food distribution service out of his home. By the fall of that year, he had moved into Stafford’s New Hope United Methodist Church to help feed students at Conway Elementary School. White’s daughter attended the school and his wife still works there in the school office.

White, who teaches leadership at Naval Surface Warfare Center Dahlgren, said he wanted to find a way to give back to the community.

“Even in our own school, we have hungry kids. I decided to focus on that,” he said.

White put together all the ingredients necessary to feed an entire family. With five entreés to choose from, he placed the food items in backpacks that he delivered to the school.

“These were complete meals,” he said. “All the ingredients for a family of four … enough to feed everyone.”

White’s service eventually grew to preparing 200 backpacks a week and a flock of volunteers came to help him prepare the meals for delivery. In March, White moved his operation to Deacon Road, where about 70 percent of his volunteer force is made up of current or former educators who White relies on for referrals.

“The teachers are my recon scouts,” said White. “They’re the ones who are identifying hungry families and connecting us as a resource. I tell people, don’t call me directly, talk to your counselor, talk to your teacher, and they’ll ask for the resources and we’ll get them to you.”

When the COVID-19 pandemic swept the nation in March and closed businesses and schools, White lost the schools as drop-off points for his meals. Today, he goes door to door delivering them.

“If a family member calls a teacher or counselor in need of help, they’ll push that to the principal and the principal will contact me,” said White, who delivered a week’s worth of groceries to three local families on a recent Tuesday. With school scheduled to resume next week, White said he expects business to once again increase significantly, but said, “We’re still missing the mark.”

“We’re feeding the kids, but there’s a need for more,” he said.

White said Stafford has a lot of wealth among its residents, but underneath that layer, there are “little pockets of poverty” where he says people are having difficulty just hanging on. While making his food deliveries, White has discovered many of those pockets in the region.

“I thought, if there are four people [hungry] in this trailer park of 300 trailers, there have to be more of them,” said White. “Instead of waiting for them to ask us for help, I went out and bought a grill, and every Tuesday and Thursday, I go to a different neighborhood and grill for anyone who needs a meal.”

“We’ve fed over 12,000 people since March, either by delivering meals or at these barbecues,” said White, who grilled April 18 at Moncure Elementary School, where he fed about 300 people.

White said when the coronavirus pandemic began, most of the local food pantries shut down, with the exception of SERVE and the Fredericksburg United Methodist Church, which opened a new pantry.

White said his organization is not trying to compete with food pantries. He said he works with a number of them in the region and sends extra food to them along with referrals for their services. White said his services are aimed primarily at students and their families who simply cannot make a trip to a food pantry.

“People are working or they don’t have transportation,” said White. “We’re taking the extra step by bringing the food to them.”

Funding for Stafford Food Security comes entirely from donations and grants. White promotes his services by speaking to church groups and at civic events and has a social media presence, where he conducts fundraisers. Several retailers—including Wawa and Weis Markets—have made food, gift card or monetary donations, and both the Community Foundation of the Rappahannock River Region and the Rappahannock Electric Cooperative have provided significant grants as well.

“Lupi Orthodontics in North Stafford gave us $10,000 at the beginning of last school year,” White said.

“We don’t need government solutions to help everyone,” said White. “We just need to take care of each other.”

White hopes to someday turn his organization over to the right person so he can pursue other community projects.

“Right now, I’m happy just getting people fed,” said White. “Now, I’m on a mission to get a food truck … I want to feed even more people.”

To find out more about Stafford Food Security, or to volunteer, visit staffordfoodsecurity.org.

Tim White of Stafford Food Security Inc. grills hamburgers to give away during registration night at Anne E. Moncure Elementary School in Stafford on Aug. 18.

Tim White of Stafford Food Security switches a propane tank on his grill.