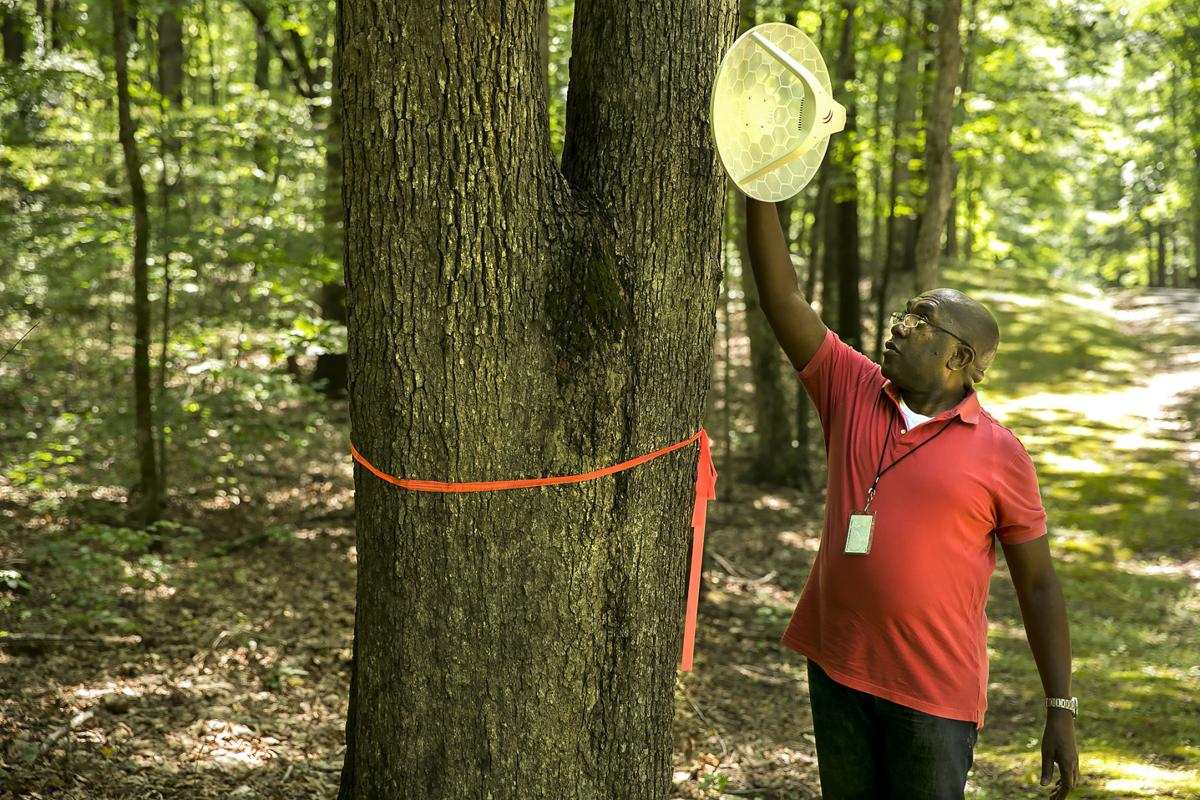 Keith Walker, founder and CEO of Aer Wireless, explains the technology designed to bring wireless broadband service to some homes in Hartwood. 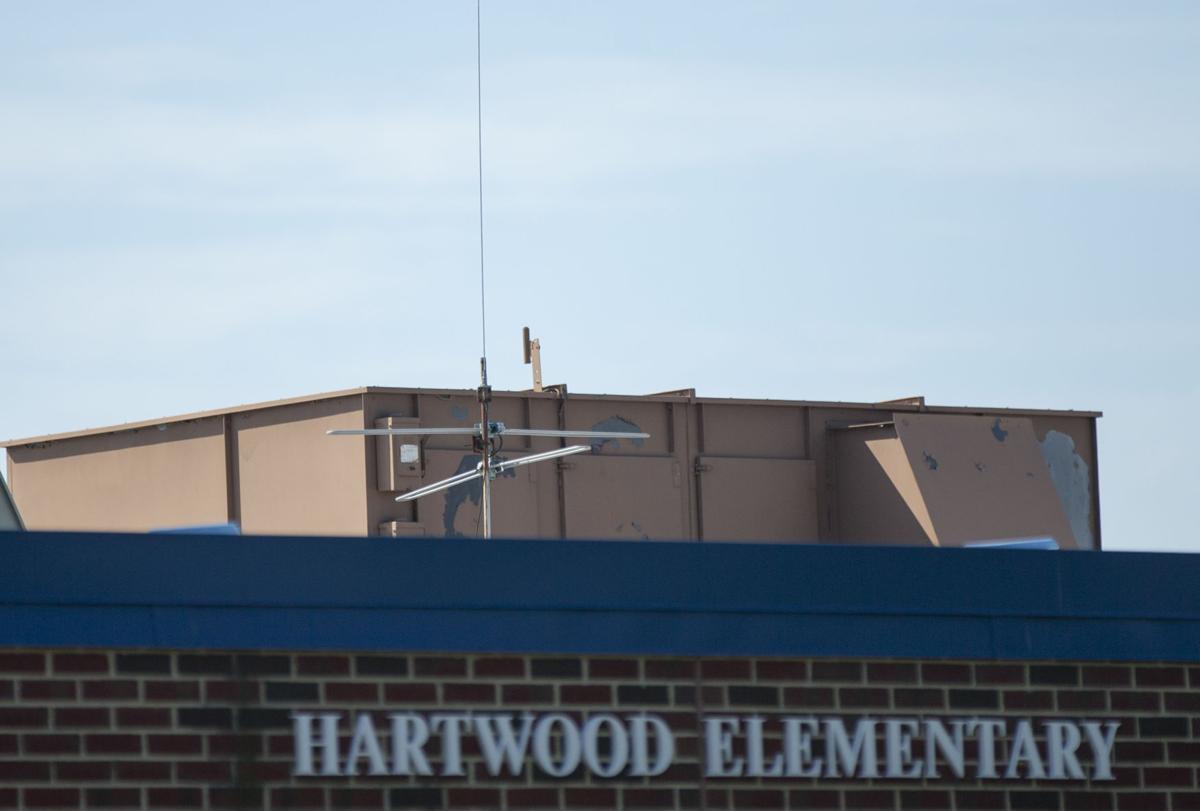 A broadband antenna is on the roof at Hartwood Elementary School in Stafford County.

The Walden Ten subdivision in Stafford County will be one of the first in the area to use wireless service provided by Aer Wireless.

According to Keith Walker, founder and CEO of Aer Wireless, trees and foliage do not interfere with wireless signals provided by Aer. The service will be installed in the Walden Ten subdivision in Stafford County.

The broadband network that connects Stafford County schools will soon be used to bring high-speed internet to about 130 private homes in the Hartwood area as part of a new program slated to begin next month.

Up to 30 of those homes are part of a county pilot project that will bring free broadband to homes where public school students live. The company providing the connection between the county’s fiber optic network and residences has so far signed up more than 100 additional households that will pay for broadband service.

Cooke is part of a small team of information technology and engineering professionals who saw an opportunity to leverage some of the strength of the county’s network to bring broadband to a rural community. That team is now poised to offer up to 12 months of free broadband to some families with children in Stafford schools.

In the early 2000s, Cooke helped engineer and build the wide area network for Stafford’s schools.

Cooke said work on that project—originally funded by a state technology grant—began in 2008. The job was completed 10 years later, and succeeded in bringing broadband all the way from the center of the county to rural Hartwood Elementary School.

“It’s all in-ground fiber, and it’s not just for schools,” said Cooke. “The sheriff, fire and rescue, county officials, they all use the network.”

In May, Michael Cannon, the county’s chief technology officer, sent a WRC television story to an associate, David Ihrie, who is the chief technology officer of the Center for Innovative Technology. The news story focused on students living in rural parts of Stafford County struggling to do schoolwork without a broadband connection.

Herndon-based CIT is leading the technology side of the Downtown Stafford project, a high-tech development planned in the courthouse area. The company also focuses on economic development and “accelerates innovation” by working with early start-up companies.

“We can provide access to school kids, and that’s a big deal. We have all the tools we need,” he said.

Ihrie said he was familiar with another project that Aer Wireless of McLean was working on, and thought the Hartwood area of the county would be a prime testing location for a broadband pilot program featuring Aer’s equipment and technology.

“It’s challenging from a broadband point of view,” said Ihrie. “The county has used hotspots, there’s not a good cellular connection, and traditional fiber doesn’t work. It looked like all the pieces were there.”

Keith Walker, founding chairman and chief technical officer of Aer Wireless, said with students being home during the COVID-19 pandemic and during the summer months, a great deal of bandwidth sits idle at Hartwood Elementary.

“We worked with the county and with the schools and went out to identify who needs connectivity and those homes were selected,” said Walker.

Walker said fiber at Hartwood Elementary will be used as the ingress point for the broadband, which will then be distributed to homes by specially formatted equipment mounted to poles and other structures.

“Our plan is to hop along the poles and drop off connectivity to the homes,” said Walker.

Walker said the mounted devices on homes will receive 1 gigabyte of bandwidth “symmetrically.”

“That means up[load] and down[load], not even a company with fiber can do that,” he said.

Walker said his technology has a 4-mile range and offers a more consistent connection than traditional Wi-Fi “mesh” networks. He said the equipment is lightweight, inexpensive and can be mounted on a pole, fence, or even a tree. Some of it is even solar-powered.

“In Walden Ten, we had to find a way to power equipment … so we’re using special solar panels with trickle-charged batteries,” Walker said. “If there’s no meaningful light, the battery charge will run equipment for two weeks.”

Walker said the Hartwood network could be operational by mid-August if there are no delays in obtaining approval to mount equipment on utility poles.

“Walden Ten will have equipment on their homes in two weeks. … Then onto the other two developments,” he said.

Cannon said the pilot project will cost the county nothing and did not require approval by supervisors.

Cooke said Aer has already placed a small wireless antenna on top of the elementary school in Hartwood. A 15-foot pole on Hartwood Road will host a pair of radio devices that will extend the broadband signal to residential homes, which will have equipment mounted on them.

After the initial group of homes are hooked up, Aer hopes to deploy services in the Rock Hill area, as well as make services available to those customers along Hartwood Road who are underserved or not satisfied with their current providers, Walker said.

With the pilot program underway in Hartwood, Walker said his company already has their sights set on improving broadband in other parts of the county.

“It’s our intention to offer the services on a permanent basis,” he said. “From there, we’ll expand in the county or wherever the services are needed.”

Keith Walker, founder and CEO of Aer Wireless, explains the technology designed to bring wireless broadband service to some homes in Hartwood.

A broadband antenna is on the roof at Hartwood Elementary School in Stafford County.

The Walden Ten subdivision in Stafford County will be one of the first in the area to use wireless service provided by Aer Wireless.

According to Keith Walker, founder and CEO of Aer Wireless, trees and foliage do not interfere with wireless signals provided by Aer. The service will be installed in the Walden Ten subdivision in Stafford County.