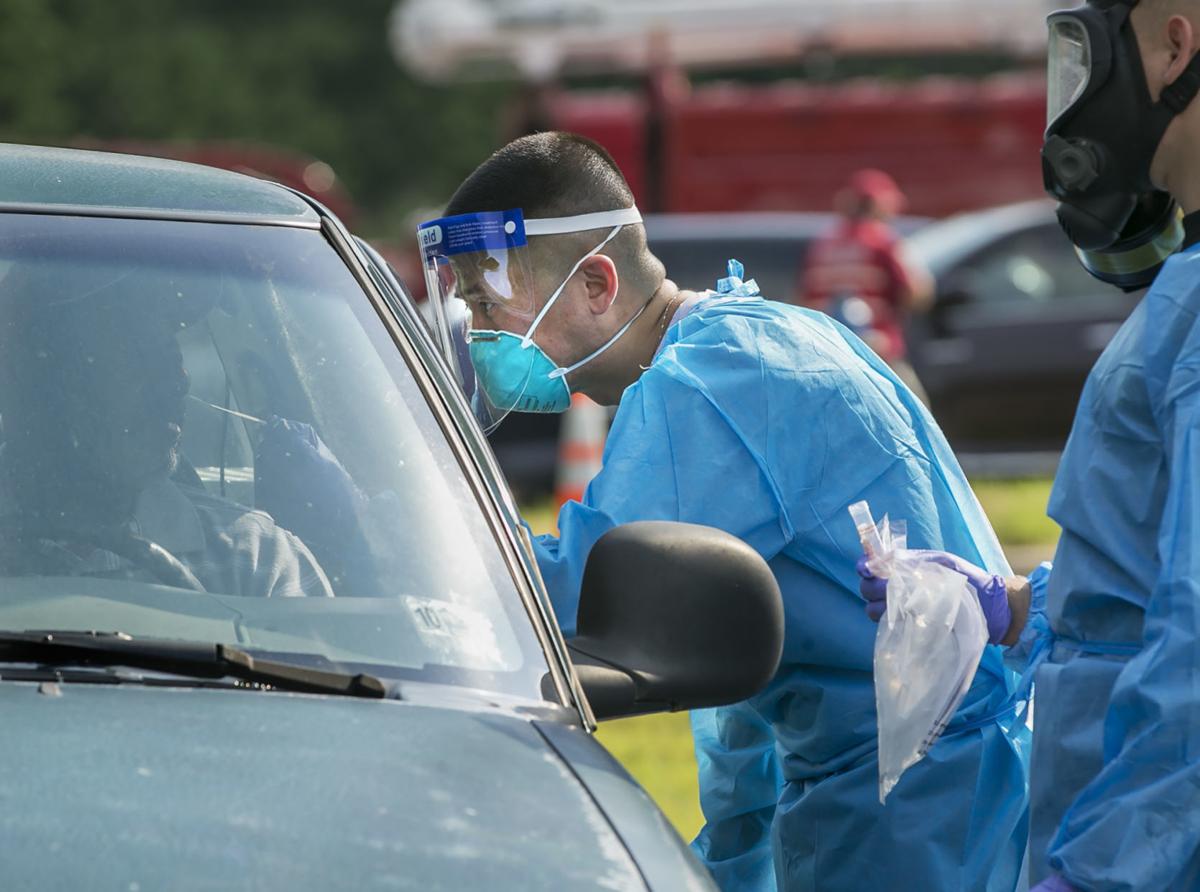 Hsuan Kuo (center) of the Air National Guard administers a COVID-19 test at a drive-thru site next to Stafford Hospital. Tuesday’s free screening program was the biggest by the local health district so far, drawing 341 people. 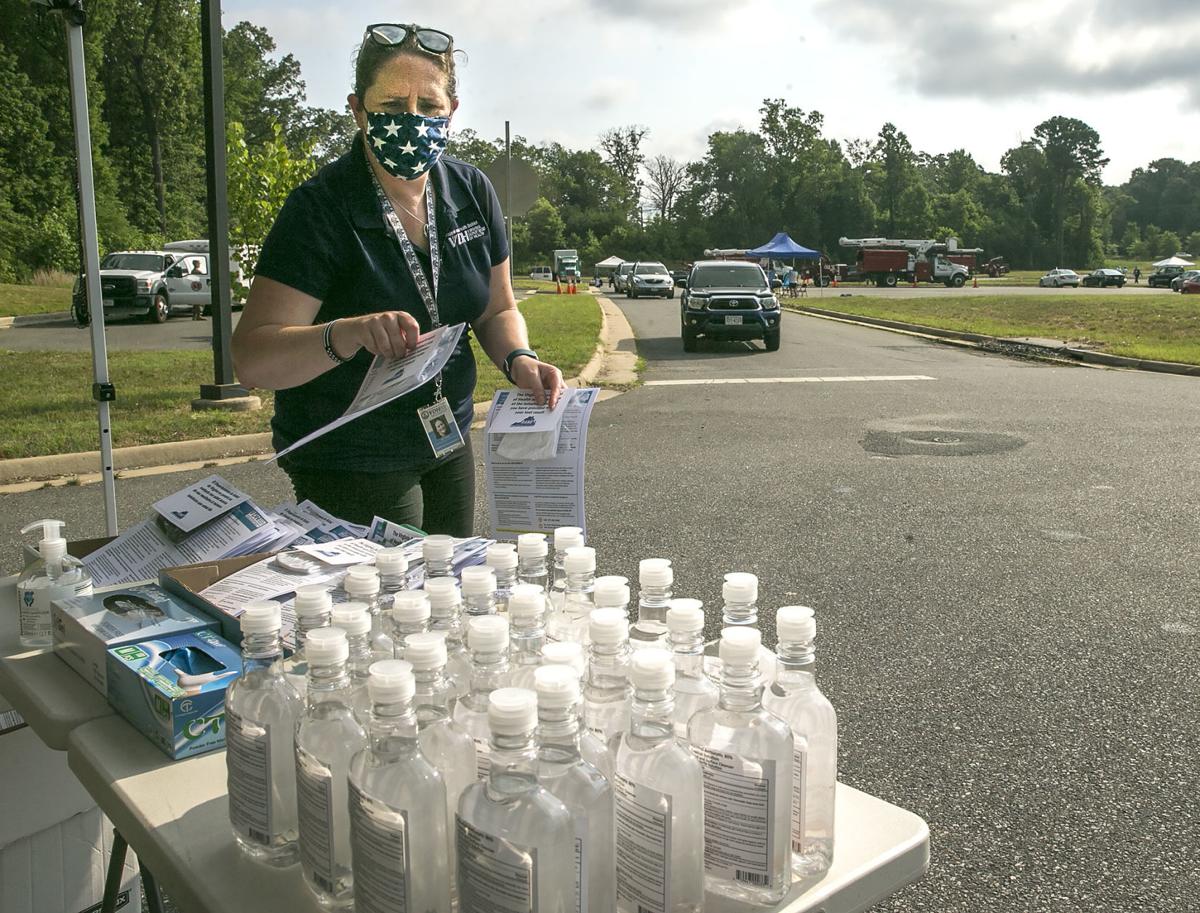 Erin Perkins of the Rappahannock Area Health District organizes hand sanitizer, masks and literature to give to those getting tests. 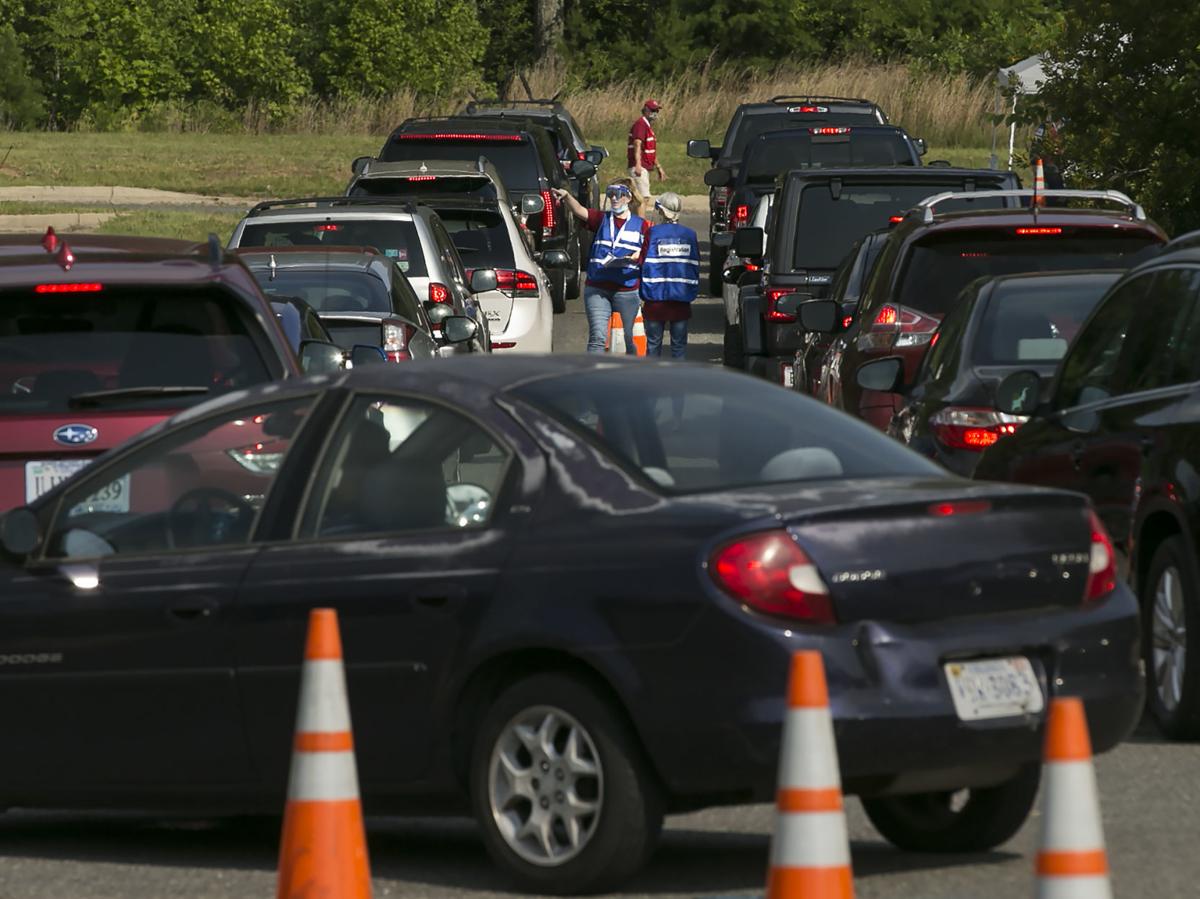 After she recovered from the momentary, and uncomfortable, sensation of having a swab stuck up her nose, Felicia Allen started to applaud.

She clapped, not just for the National Guard members who administered the COVID-19 test Tuesday in a parking lot at Stafford Hospital, but for others who made the community event possible.

“It is needed in Stafford, and the efficiency of it is outstanding,” said Allen, who serves as a chaplain at the hospital. “We are so appreciative of it.”

Allen was among 341 residents who took part in the fourth free community testing offered by the Rappahannock Area Health District. It was the health district’s largest turnout, to date, as people had registered for all 400 test kits that were available by Monday morning.

But a number of them didn’t show up—which often happens at free events—so organizers offered tests to those who hadn’t preregistered during the last hour of the event.

Some of the participants got tested even though they hadn’t been feeling sick. Allen had traveled to Georgia and Alabama recently and wanted to be sure she hadn’t contracted the respiratory disease.

Dave Maurer squinched up his nose to avoid sneezing after his test, then said he signed up for the screening because it was available at Stafford Courthouse. He didn’t know anyone who’d been sick or tested positive for the novel coronavirus.

Members of the Army and Air Force National Guard administered the tests, gently inserting each cotton swab into a nasal cavity and twirling it slightly. Medic Hsuan Kuo quickly explained to people, who stayed seated in vehicles and wearing face coverings until it was time for the swab, that the test might cause a slight irritation.

The swab quickly found its target, he counted from one to five, then removed it and placed it in a vial marked with the individual’s name. As those tested made funny faces or pinched their noses in reaction, Kuo cheerfully wished each person a good day.

He walked to a nearby table, sprayed his hands with disinfectant and repeated the process.

Most of the National Guard members wore shorts instead of camouflaged uniforms under their teal blue laboratory gowns. Some, like Kuo, donned a mask and face shield while other Guardsmen wore the kind of respiratory masks typically seen with hazmat suits.

Tuesday’s event marked the last time National Guard members will assist with community testing. Health district officials are looking to partner with other agencies that can provide the service, said spokesperson Allison Balmes–John.

After participants got tested, they rode to the last station on the drive-thru event. Erin Perkins, a health department official who normally inspects restaurants, stood on one side, and the Rev. Joe Henderson, who’s working with the district on community outreach, was at the other.

Both handed out free masks, bottles of hand sanitizer and information about how to proceed if the tests produce positive results. Handouts are printed in English and Spanish.

Henderson said some people have heard through the grapevine that the test is painful, and he wanted to let them know that it’s not that bad. Sure, he didn’t miss the chance to tease those whose eyes were watering afterward—asking if they needed a bottle of cold water to go with their tears—but he said the overwhelming emotion he sees is relief rather than discomfort.

“By the time they get here, they’re glad to have it done, glad it’s over,” Henderson said.

The district plans community testing events in Spotsylvania and King George counties next, then hopes to visit specific neighborhoods where those most at-risk may live. Henderson said he’d like to see testing offered at night or on Saturdays, especially for Spanish-speaking residents who aren’t able to attend daytime events because they’re working.

Latinos make up about 9 percent of Virginia’s population, but almost half of the positive cases, locally and statewide.

The Rappahannock Area Health District reported 25 new cases Tuesday for a cumulative total of 2,559 cases. That includes 1,048 cases in Spotsylvania County; 1,022 in Stafford County; 260 in Fredericksburg; 129 in Caroline County; and 100 in King George County.

No new deaths have been reported since Thursday. To date, 44 people in the local health district have died and 232 people have required hospitalization.

Elsewhere in Virginia, there were 829 cases in Culpeper County; 450 in Fauquier County; 154 in Orange County; and 118 in Westmoreland County.

As case numbers rise, so do the number of people hospitalized for virus symptoms. Rates are higher than they've been since the pandemic began.

A local man was killed Friday night in a single-vehicle crash in Caroline County, police said.

New COVID-19 cases are being reported in record numbers across the area and state.

Hsuan Kuo (center) of the Air National Guard administers a COVID-19 test at a drive-thru site next to Stafford Hospital. Tuesday’s free screening program was the biggest by the local health district so far, drawing 341 people.

Erin Perkins of the Rappahannock Area Health District organizes hand sanitizer, masks and literature to give to those getting tests.